The West has been told to ‘wake up’ to Russia’s growing plot to weaponise and monetise the Arctic, turning the once pristine and peaceful polar region into the ‘battleground of the future.’

For years Vladimir Putin has been building airbases, missile launch pads, radar stations and naval yards north of the Artic Circle – but the region is now set to take on renewed importance after Russia was hammered by Western sanctions over the war in Ukraine, which also trashed its reputation as Europe’s second-most powerful army.

The High North is perhaps the one region where Russia can now lay claim to being the military superpower, a new report from the Civitas think-tank argues, a fact the Kremlin is likely to exploit as it seeks to plunder an estimated $30trillion of natural resources from the frozen earth and open up new trading routes exposed by melting sea ice.

Putin, cash-strapped due to sanctions, is almost certain to lean on China for money to achieve his vision – offering Beijing a back-door into a region it has long plotted to control but where it has no territorial claim. Sitting together atop the world, the pair could menace the West across three continents and in its two largest oceans.

The UK is now being urged to reach out to allies with rival claims to the region – the US, Canada, Denmark, Norway and Iceland – to form a new CAUKUS alliance similar to the AUKUS deal with Australia, deploying military might including nuclear submarines into the Article Circle as a show of strength to both Beijing and Moscow.

Rob Clark, a soldier-turned-military expert who authored the report, said: ‘We need to wake up to the threat posed by Russian expansion in the Arctic – while all eyes are on Ukraine, Russia is testing new-age nuclear subs and hypersonic missiles in the Arctic and building up its presence in the region.

Russia has been building new military bases while opening gas and oil fields across the Arctic, many of them along the North-East Passage – a valuable trading route that is opening up due to melting ice which Putin hopes he will be able to monetise in the years to come, along with $30trillion in natural resources 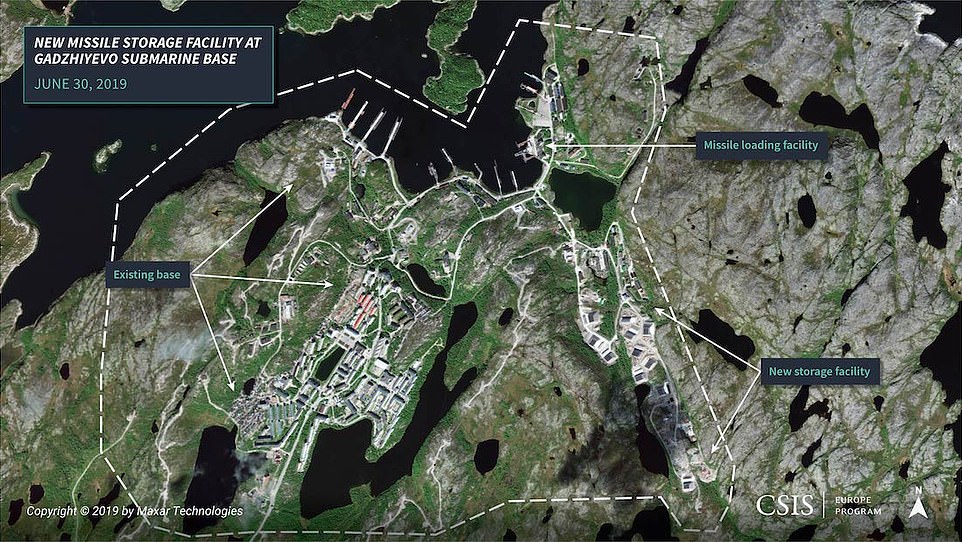 Russia’s submarine base at Gadzhivevo has been expanded to include new storage facilities for Poseidon nuclear drones and Tsirkon hypersonic cruise missiles, two of Moscow’s most cutting-edge weapons systems

‘Vladimir Putin has already told his Generals that the Arctic is “the concentration of practically all national security” for Russia. By building up a massive military arsenal in the Arctic the Russians can control new so called ‘polar routes’ to dominate global trade with a Russian ensign.

‘Russian energy co-operation with China is well advanced and the potentially massive natural mineral reserves worth up to $30 trillion leave open the door to Vladimir Putin building up Russian wealth with his friends in Beijing while closing down new global trade routes.

‘NATO needs to protect its northern flank and the British need to put an Ambassador in the Arctic to keep a close eye on Russian activity.’

Russia’s presence in the High North is nothing new. Prized by both the Russian Empire and Soviets for its rich natural resources, Josef Stalin once spoke of the ‘Red Arctic’ and built dozens of military bases there.

But interested waned as the Soviet Union crumbled, and in 1987 Mikhail Gorbachev declared it should be a ‘zone of peace’ – signalling an end to military expansion there and the start of cooperation with the West over scientific research projects.

Putin has other ideas. Mirroring the Soviets and Imperialists who went before him – as he so often does – he declared the region to be the ‘concentration of practically all aspects of national security – military, political, economic, technological, environmental [and] resources’ at a summit in 2014.

Since then, he has reopened some 50 Soviet-era Arctic bases including airfields, radar stations, cargo ports, missile launch pads and naval yards.

Others have been expanded, including at least 18 airfields in the Kola Peninsula which sits around 200 miles east of Finland and houses most of Russia’s military forces in the region: The headquarters of its Northern Sea Fleet, a large portion of its nuclear forces including bombers and missiles, and supply stations for bases further north.

Some have been adapted to house Moscow’s state-of-the-art military technology. The Plesetsk Cosmodrome was used last year for a test-launch of Russia’s latest satellite-killer missile and was recently used to launch Sarmat-2, its latest nuclear missile capable of hitting any country on the planet.

Other bases have been adapted to house new hypersonic Tsirkon cruise missiles, and submarine ports in the Kola Peninsula are though to play host to Poseidon nuclear drones, reports by the Centre for International and Strategic Studies found. 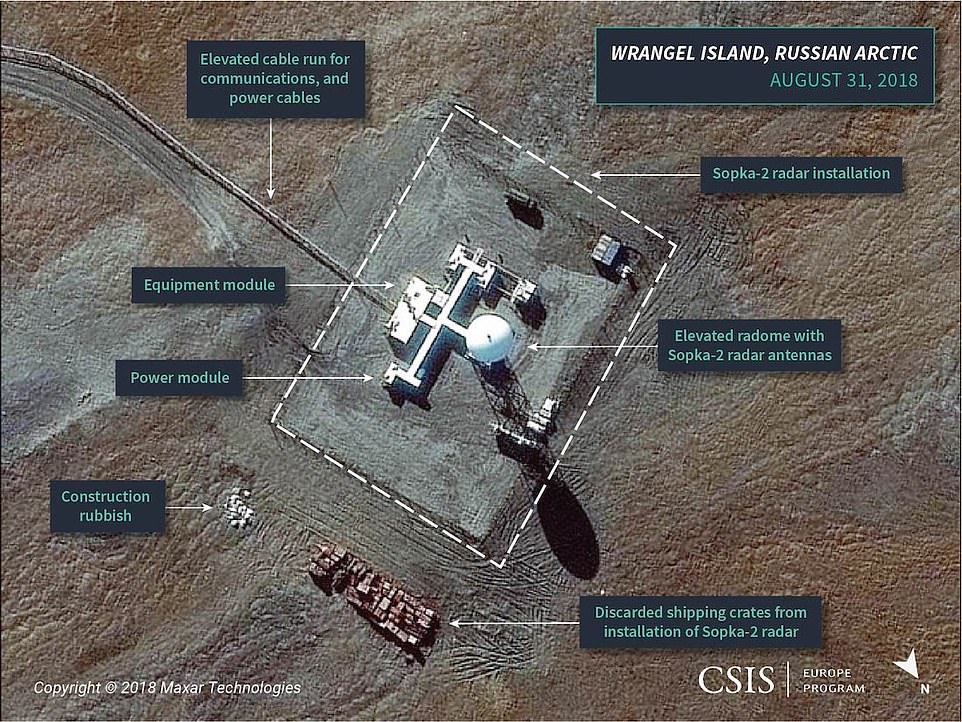 An new airbase on Wragnel Island, near Alaska, is equipped with a sophisticated radar array with US analysts trying to work out exactly what it has been tasked with spying on 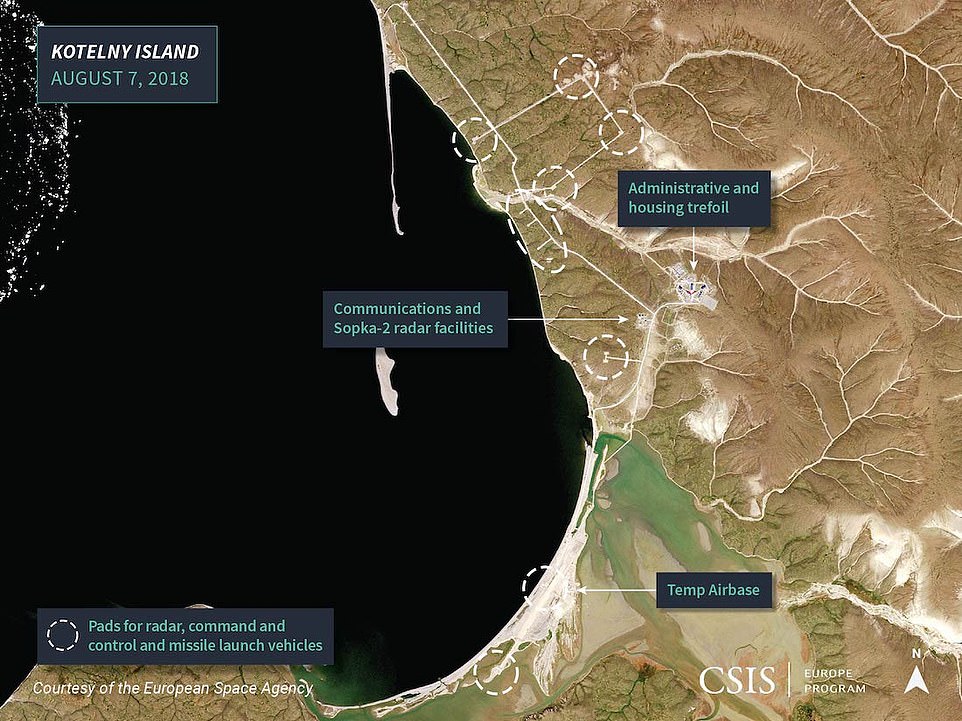 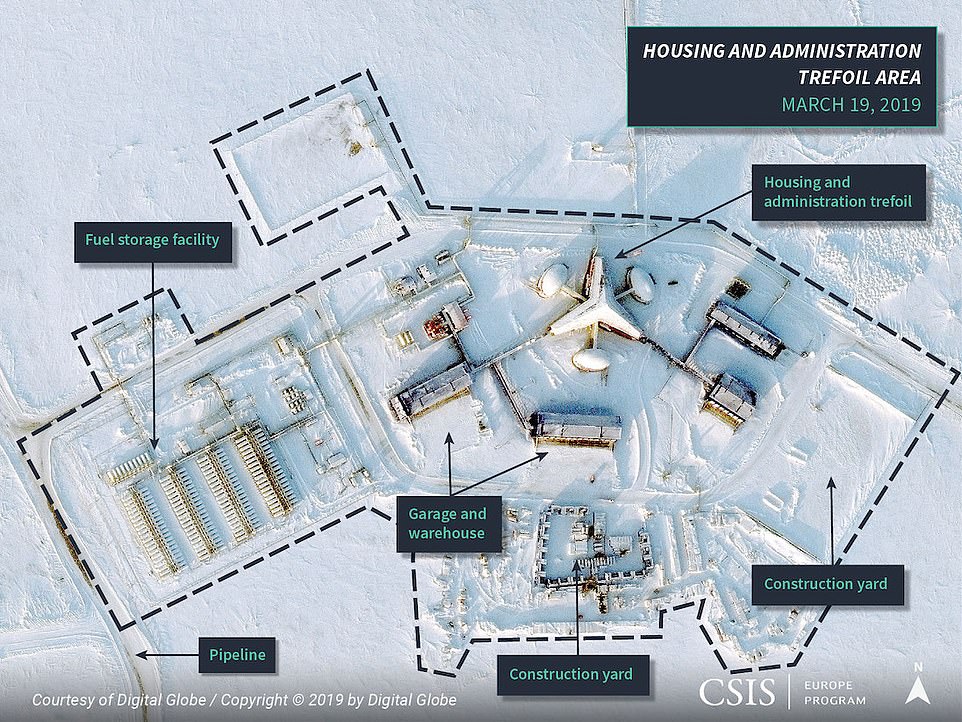 A new military base on Alexandra Land marks Russia’s closest base to the North Pole, and features an landing strip built on sea ice along with missile batteries and barracks 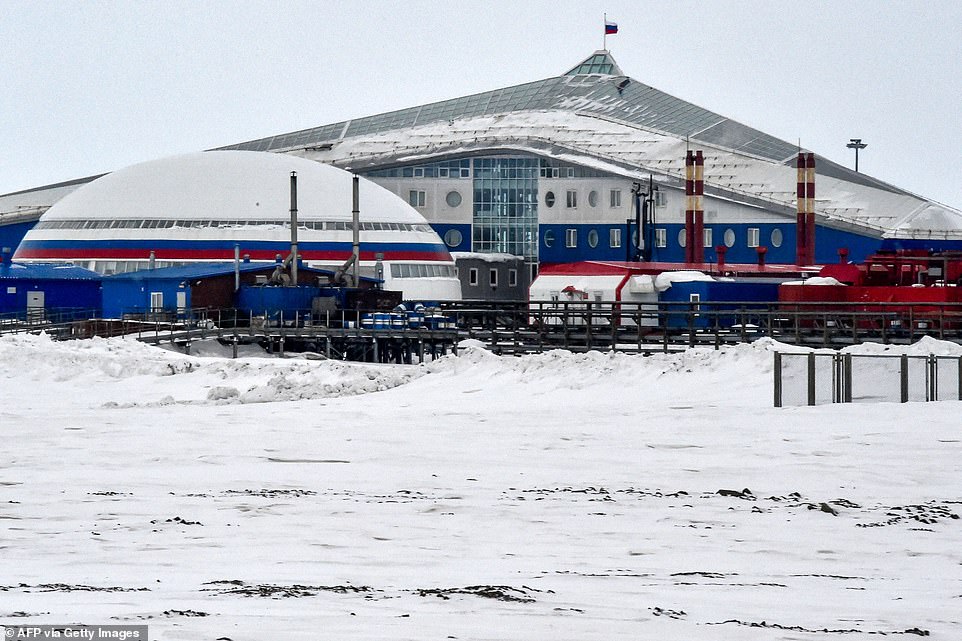 A view of the “Arctic Trefoil”, or three-lobed leaf, military base on the island of Alexandra Land, which is part of the Franz Josef Land archipelago 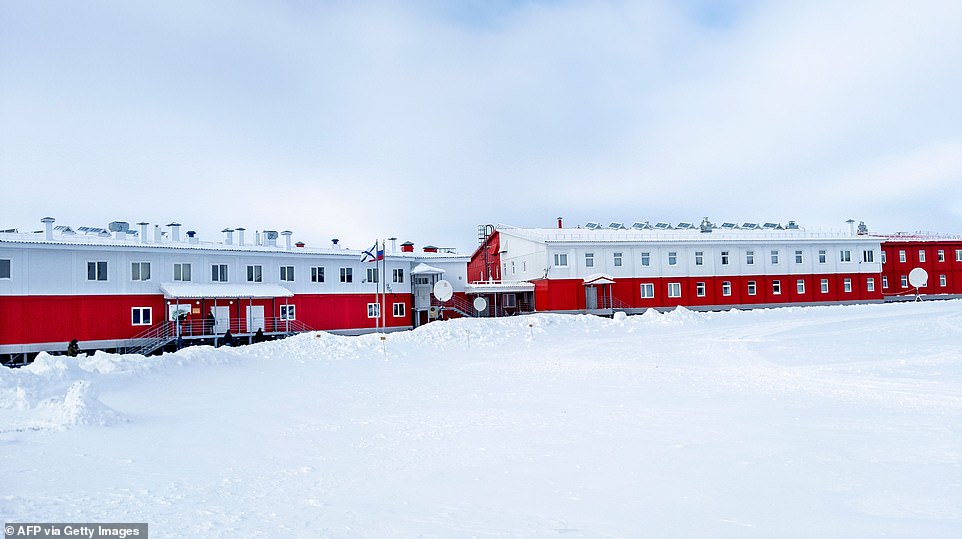 A view of buildings at Russia’s northern military base on Kotelny island, deep inside the Artic Circle

The drones are huge – 65ft long and designed to be fired from an even larger submarine that has yet to be finished – that can pilot themselves to a target and detonate with a force of two megatons, thousands of times the size of the bomb that levelled Hiroshima, which is designed to inundate nearby coasts with a radioactive wave.

Dozens of new bases have also been built, including at least five major airfields along what is known as the North-East Passage – a shipping route connecting Europe with Asia that is becoming increasingly accessible due to rising global temperatures weakening sea ice that has made it impassible in the past.

Russia hopes to turn this into a viable and lucrative alternative to current shipping lanes that run either around the Africa’s Cape of Good Hope and across the Indian Ocean, or through the Mediterranean and around the Arabian Peninsula via the Suez. Going north would shave around two weeks off even the fastest journeys further south.

China is also eager to open up this route, which would allow its trading ships to bypass the Strait of Malacca – a strategic bottleneck bordered by Indonesia, Malaysia and Singapore, which are partnered with the US.

Though the route is not yet a common one, Moscow has proved that it does work: In 2009 two German cargo ships sailed from South Korea to Rotterdam using it, escorted by a Russian icebreaker.

In anticipation of opening the sea lanes up to more trade, Moscow passed a law in 2013 stating that all icebreakers using the route had to fly the Russian flag – meaning they have to be registered in Russia, and pay fees there.

That is due to be followed by laws requiring Russian captains on board ships navigating the passage, levying tolls, and a requirement for all journeys to be preregistered. Such a move could generate billions in revenue –  Egypt earned $6.3billion in tolls from the Suez in 2021 – and give the Kremlin power over a large part of world trade.

And that is far from the only way Putin hopes to make money from the region. The Arctic’s largest asset, by far, lays buried within its frozen soil: An estimated $30billion in natural resources including vast untapped fields of oil, natural gas and rare earth minerals that are key to the manufacture of modern technologies.

Projects are already underway. In 2014, Russia’s largest energy firm Gazprom signed a $400billion project with China’s CNPC to supply gas along a newly-built Power of Siberia pipe network over the course of 30 years.

In 2013, the pair signed another lucrative deal for liquified natural gas extracted from a new field in the Yamal Peninsula to be shipped to Beijing with Moscow set to approve a Power of Siberia 2 pipeline from the same region into China in short order.

Beijing agreed to invest some $11.5billion in developing these gas fields in 2013, after which Russia dropped its long-standing opposition to Beijing having ‘observer’ status at the Arctic Council, the region’s primary governing body. China was given the status the same year, despite its nearest territory being 930 miles away, in what is likely to be a sign of things to come. 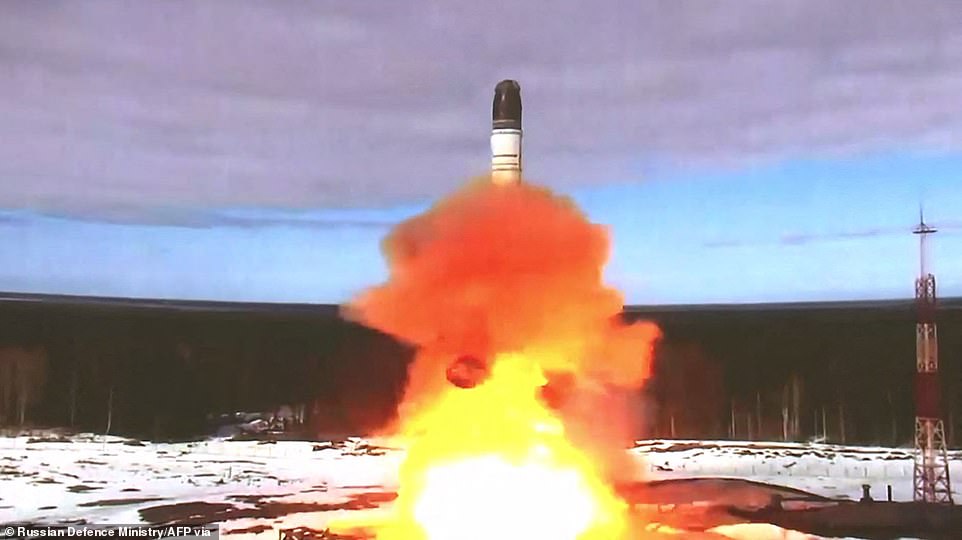 Russia has been increasingly testing its most up-to-date weapons in the Arctic, including a recent test-launch of the Samart-2 nuclear missile from the Plesetsk Cosmodrome 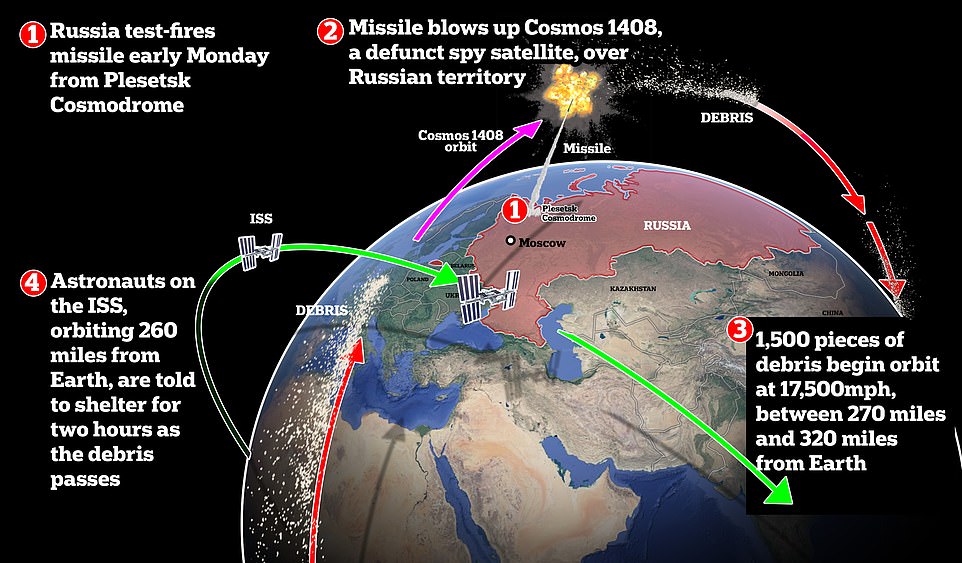 The Arctic Plesetsk Cosmodrome was also the site from which Russia shot down one of its own satellites in November 2021, with debris narrowly missing the International Space Station 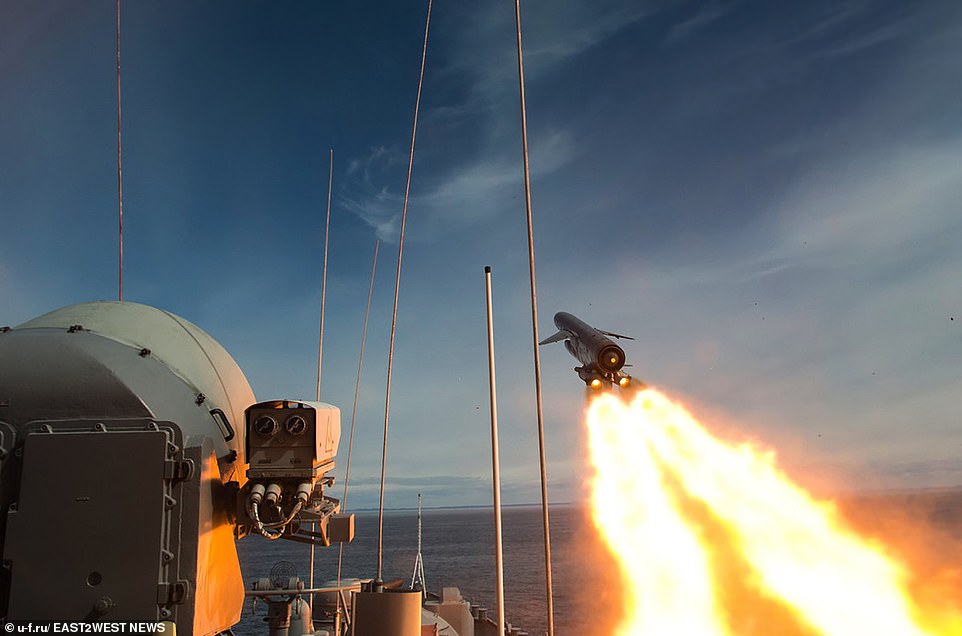 Naval bases in the Arctic have also been expanded and refitted to house Tsirkon hypersonic cruise missiles, which Putin claims cannot be stopped by conventional defences

Since the 2013 investment, China has also began to expand into the Arctic – including into some of the same areas as Russia. Beijing now has a radar station on Svalbard, a remote island typically recognised as Norwegian territory, where Chechen special forces – deployed by Russia – carried out military drills in 2014.

Beijing also has a satellite base in Sweden and an antenna array in Iceland, both of which are ostensibly for scientific research but are now thought to serve a dual military use.

Civitas research found that, while Beijing talks to world leaders of scientific cooperation in the Arctic in public, in state media designed for domestic audiences it speaks of a ‘game of great powers’ over the ‘most competitive resource treasures’ left on the planet.

Academics at China’s maritime and naval universities have declared that whoever controls the Arctic will ‘likely have the strategic initiative of the world,’ suggesting Beijing’s aims for the region are even bigger than Moscow’s.

Responding to the report, former UK Armed Forces Minister Mark Francois MP said: ‘In the wake of the recent AUKUS Agreement, the idea of a parallel UK, US , Canada (CAUKUS) arrangement would seem to have considerable merit.

‘As a fellow Commonwealth country and key “five eyes” partner, with strong shared interests in the Atlantic and the High North, creating closer ties between the UK and Canada, also incorporating the United States, must make sense, particularly in the face of a resurgent Russia. CAUKUS is an idea whose time has come.’

Tobias Ellwood, chair of the House Defence Committee, added: ‘Recent developments have shown that the free world, as it has in the past, needs to come more tightly together if we are to face malign and rogue states who represent the antithesis of our shared values.

‘Protecting our values, supply lines and access to resources will require many to look further afield than our traditional spheres of influence. “CAUKUS” would have the strategic flexibility to act multilaterally to protect our shipping lanes, rights of navigation and allies.

‘With the Five Eyes the bedrock of global security “The Next Front” present the pragmatic proposals necessary to ensure peace in an increasingly unstable world.’