Annastacia Palaszczuk has again lost her cool under pressure about when she will finally open the border, saying she was ‘sick of being attacked’.

The Queensland premier repeated unverified claims that her state would be hit with a deadly Covid outbreak if its opened up at 80 per cent vaccination.

She then played the victim when this was put under scrutiny and and she was pressed for detail on when she would actually allow NSW and Victoria in.

‘Let me say this to you, if we get a Delta outbreak here, we’ll all be in lockdown and no business will be operating,’ Ms Palaszczuk said at at a new vaccination hub in Brisbane on Thursday.

Ms Palaszczuk implied Queensland health system would be in crisis like NSW if the border was opened.

This was despite the issues with NSW’s hospitals being caused by an outbreak that was caused by barely anyone being vaccinated three months ago.

‘There are very serious issues here, the hospitals in NSW are going to be overwhelmed next month,’ the premier said.

‘I don’t want that for Queensland, that is why we have tough border measures in place and that is why I want people to get vaccinated, to protect our freedoms.’

Ms Palaszczuk repeated her mantra that the 80 per cent threshold would be different for different states, despite her agreeing to the national plan.

‘In Victoria, at 80 per cent, they will be allowed 30 people to visit for Christmas dinner. Here, Queenslanders can have 100 people over,’ she said.

‘I’m sick of constantly being attacked for doing the right thing.’

One is a St Thomas More College student from the cluster at Sunnybank identified two weeks ago who is in home quarantine, the other in hotel quarantine.

She directed reporters to ask the federal government about the national plan for re-opening ahead of tomorrow’s national cabinet meeting.

‘You don’t understand it, I’m sorry,’ she chided one reporter who referred to what NSW residents would be free to do once the 80 per cent target was reached. 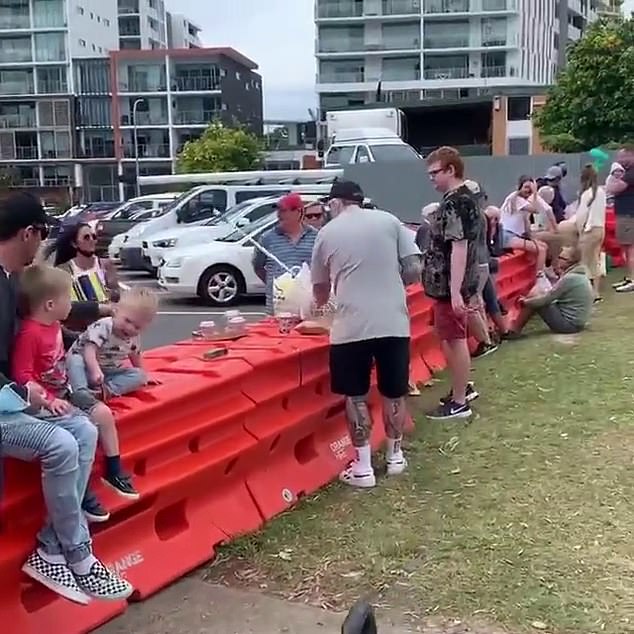 Ms Palaszczuk said a lot of the attacks on her state were coming from the federal government.

‘Everyone needs to take a deep breath here because what we are trying to do is keep Queenslanders safe,’ she said.

Queensland’s vaccination rate is 61.53 per cent of the eligible population having received a first dose and 42.78  per cent now fully vaccinated – the worst in Australia.

It is not expected to reach the 80 per cent full vaccination target until early December.