Aisle be damned! Shoppers reveal the VERY unusual outfits they’ve spotted in the supermarket – from a woman wrapped in her duvet to a man dressed as a hotdog

Have you ever seen someone wearing something unique, or maybe behaving in an unusual way while you’re doing your weekly shopping?

Perhaps a person dressed as a hot dog or a sporting a Spider-Man costume? If you answer yes, then you’re not alone. The Money Time has compiled a list of photos of Walmart customers – claiming that the US store has the ‘wackiest’ clientele.

Among the shoppers snapped are a man toting an enormous gun and holster while grabbing some groceries, and another wearing a snorkel.

Other strange outfits include a woman wrapped in a duvet as well as a man wearing shirt threatening to punch anyone who fails to socially distance appropriately.

Here, FEMAIL rounds up the weirdest and wackiest supermarket shoppers…

A hot look! It’s not always easy to find the perfect outfit – deciding how casual or formal you should be, or what type of processed meat you should dress as 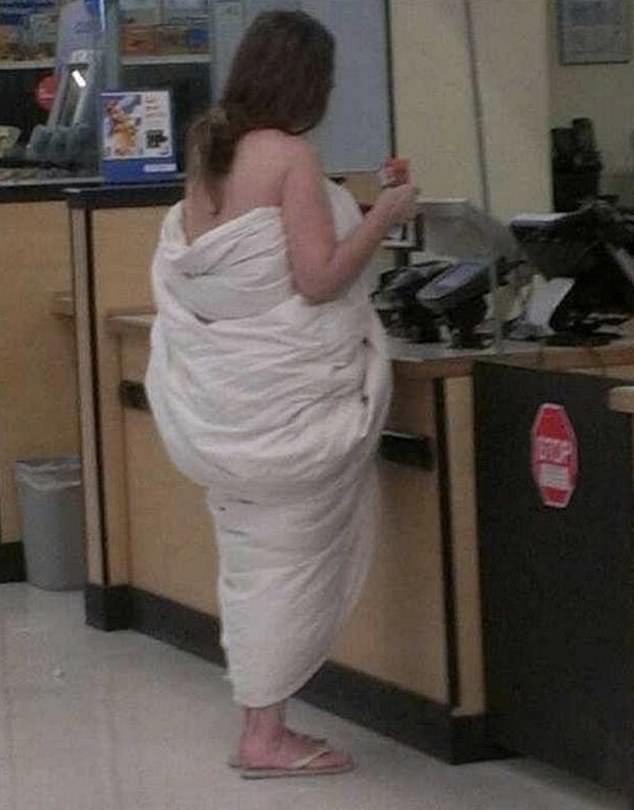 Looks like this lady has taken the concept of a ‘duvet day’ far too literally. You’re meant to leave the comforter on the bed 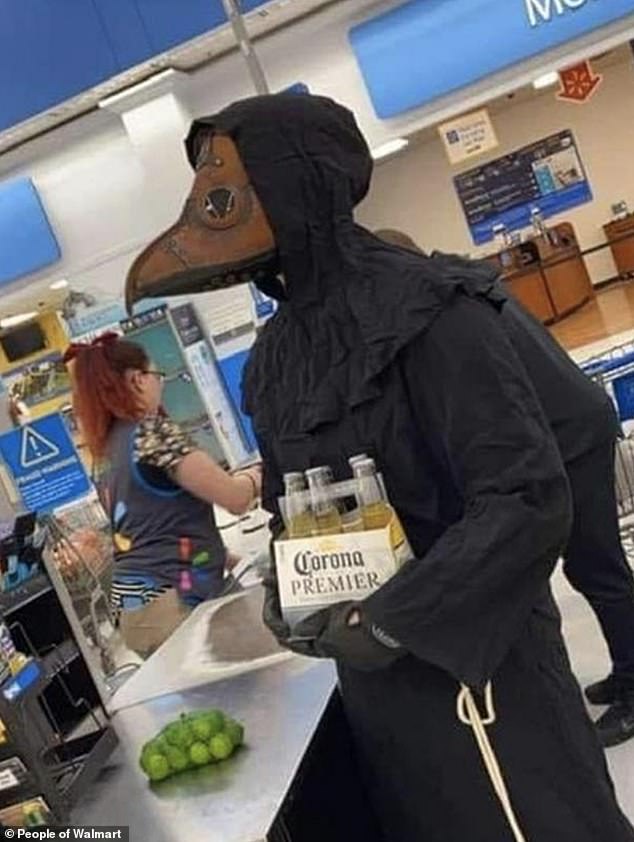 Nothing to see here! One ominous shot shows a plague doctor purchasing a six-pack of Corona Premiere and a large bag of limes 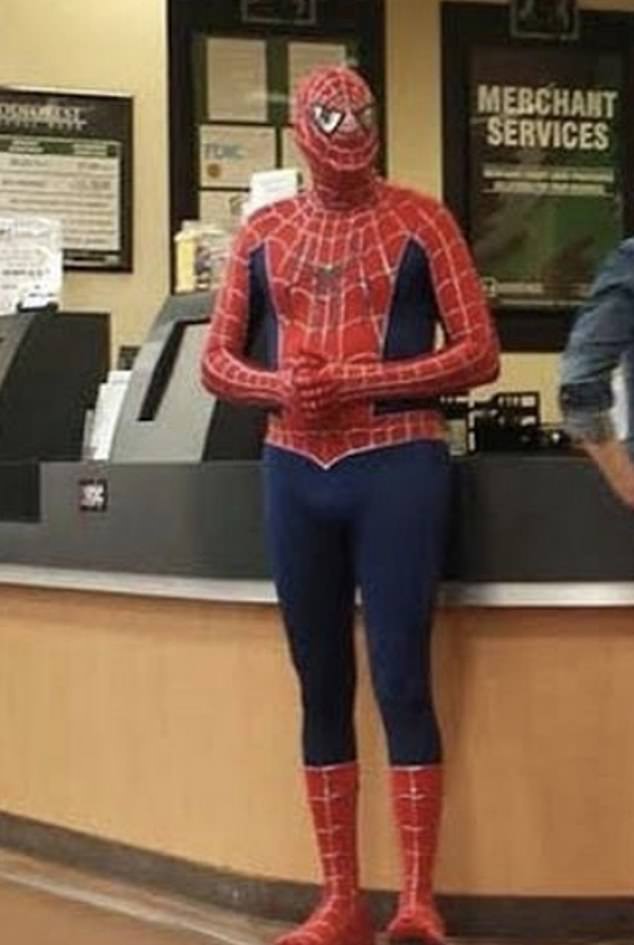 This masked shopper looks less superhero, and more slightly nervous. Maybe they are just unsure of their outfit choice 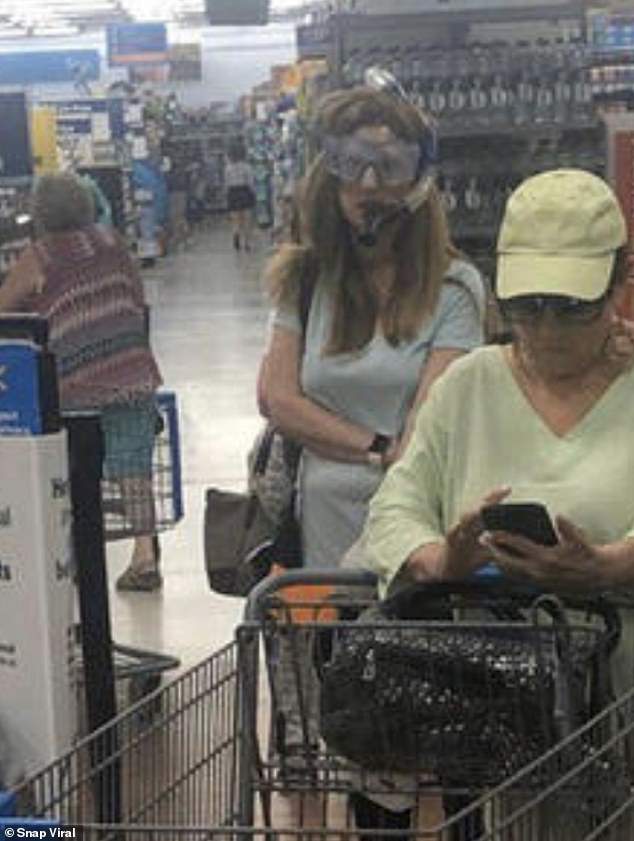 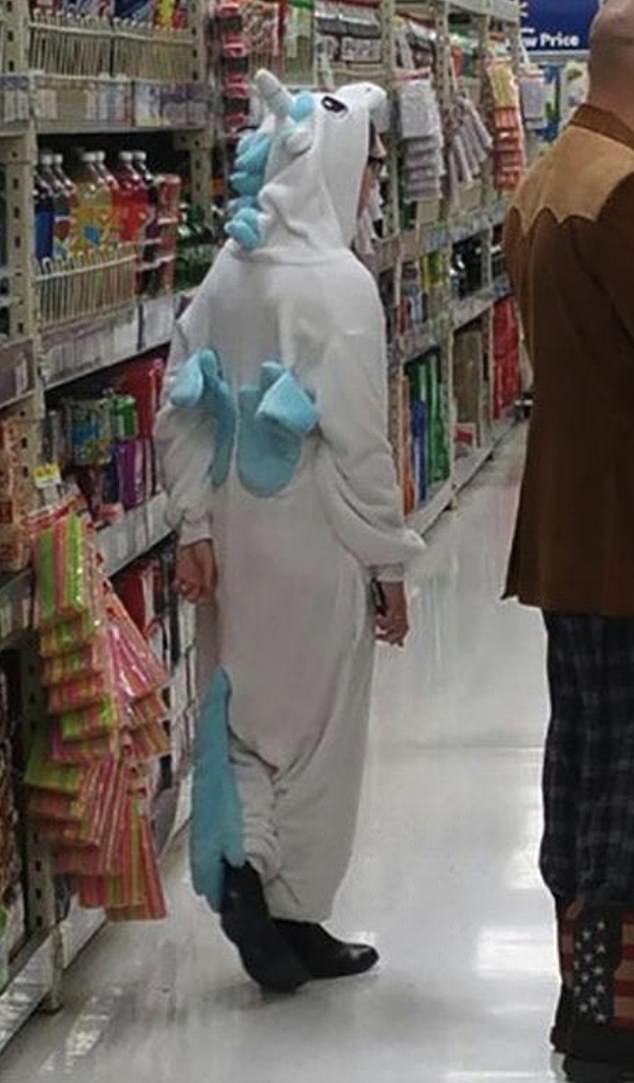 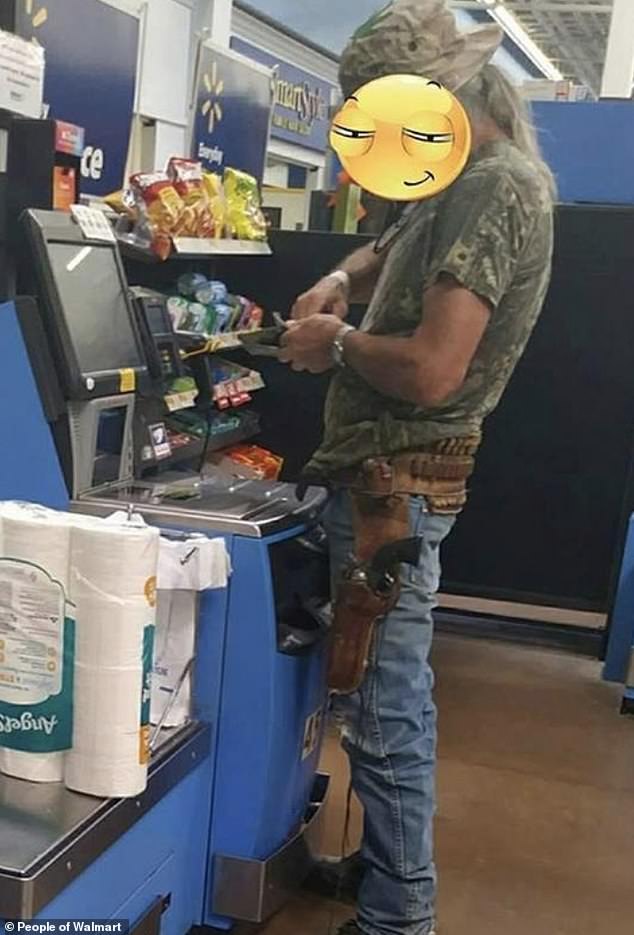 The most unusual thing about this man’s attire is his enormous gun holster and gun. Some may say it’s a bit over the top for a simple trip to buy toilet paper 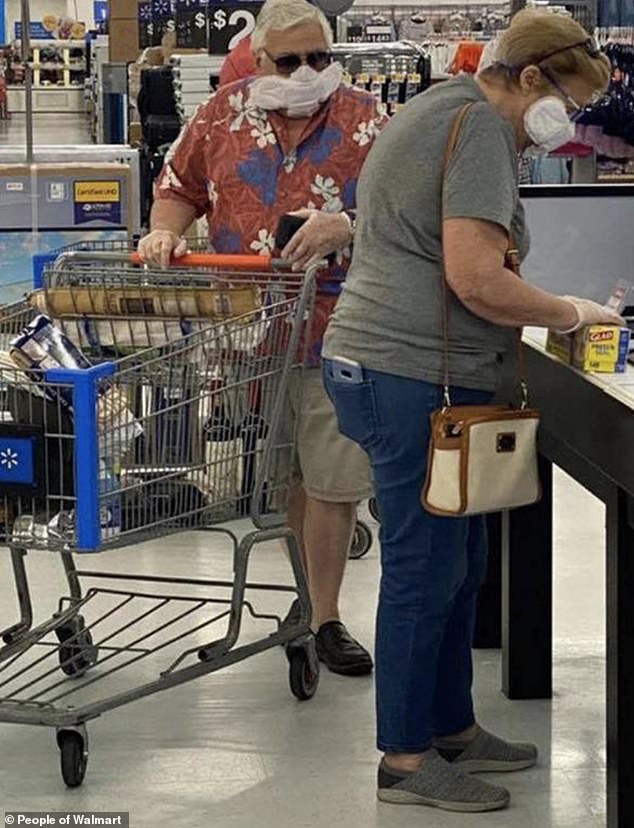 While this couple’s intentions are likely in the right place, it’s definitely an unusual move to wear sanitary towels as protective face masks 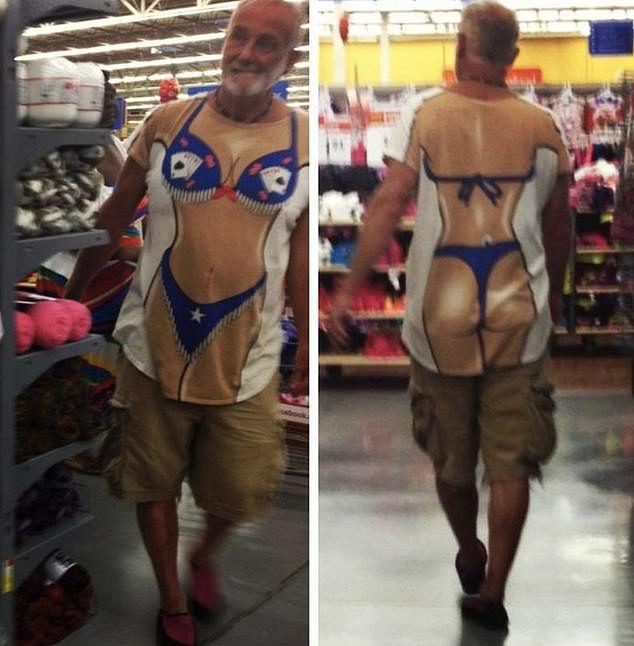 Am optical illusion: this man is wearing a T-shirt featuring a caricatured silhouette of a woman, and not actually a female in a bikini 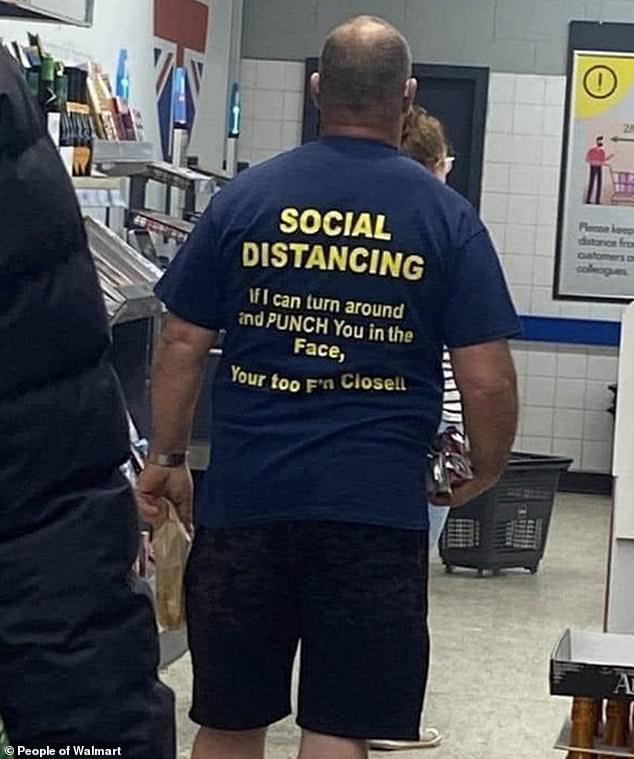 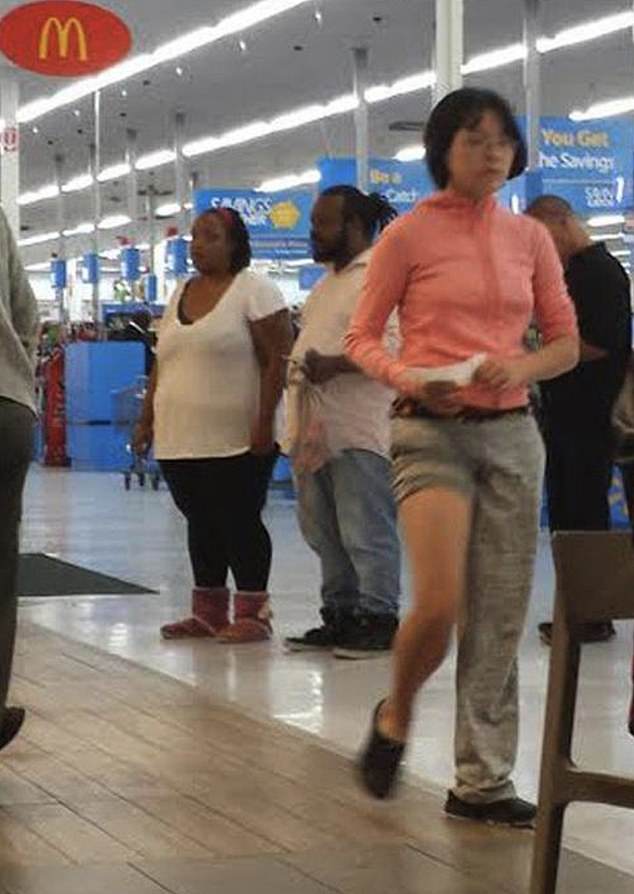 This lady’s unusual style choice has seen her opt for a short/trouser hybrid garment, with one very rolled leg, and one long 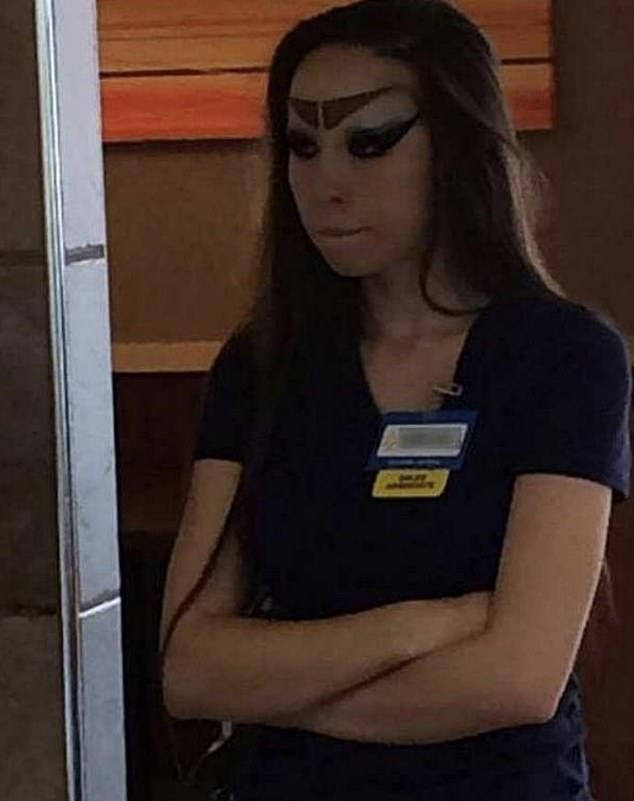 If one look has taken the make-up world by storm in recent years, it’s big eyebrows. And this lady has possibly the biggest yet