I’m always amazed and, quite frankly, inspired by the passion that our sporting analysts bring to the table each weekend on Road to the Olympic Games.

It’s the intimate knowledge and affection they exude which delivers the thrill of competition to so many viewers across the country.

And in the face of the pandemic, winter sport around the world has found a way to not only survive, but to thrive in the pre-Olympic year.

Perhaps it’s because sport means so much to so many people, in so many places, and the thought of a winter without it is a non-starter.

So it is that in Holland, where they are obsessed with speed skating, the world championships push ahead in the Heerenveen bubble and the historic Thialf Arena. Similarly, the sleds continue to rumble in Altenberg, Germany, which is the acknowledged heartland of the sliding pursuits.

In the Dolomites of Italy, the alpine world championships unfold as skiing takes centre stage against a spectacular backdrop. Further north, in Scandinavia, the ski cross and snowboard racers go head-to-head in Idre Fjäll, Sweden.

In all, Road to the Olympic Games will have eight hours of world championship competition this Saturday and Sunday and the voices who describe the action so expertly have been there to experience the devotion to their respective sports first-hand.

They understand that as we Canadians wouldn’t dream of a season without hockey, or Americans would do anything to make the Super Bowl spectacle happen, Europeans will deliver winter sport world championships — come hell or high water.

“Even without fans in the stands, the rich lore and history of the Netherlands’ love for skating is visceral and every skater seems to find that sixth gear regardless of circumstances,” says two-time Olympian Anastasia Bucsis, CBC’s speed skating analyst.

“My career’s fondest memories stem from competing in the Netherlands around Remembrance Day. The Dutch fans would come up to us in grocery stores or on the street and thank us not only for racing and providing sporting entertainment but also for Canada’s history of liberating Holland in World War Two.” 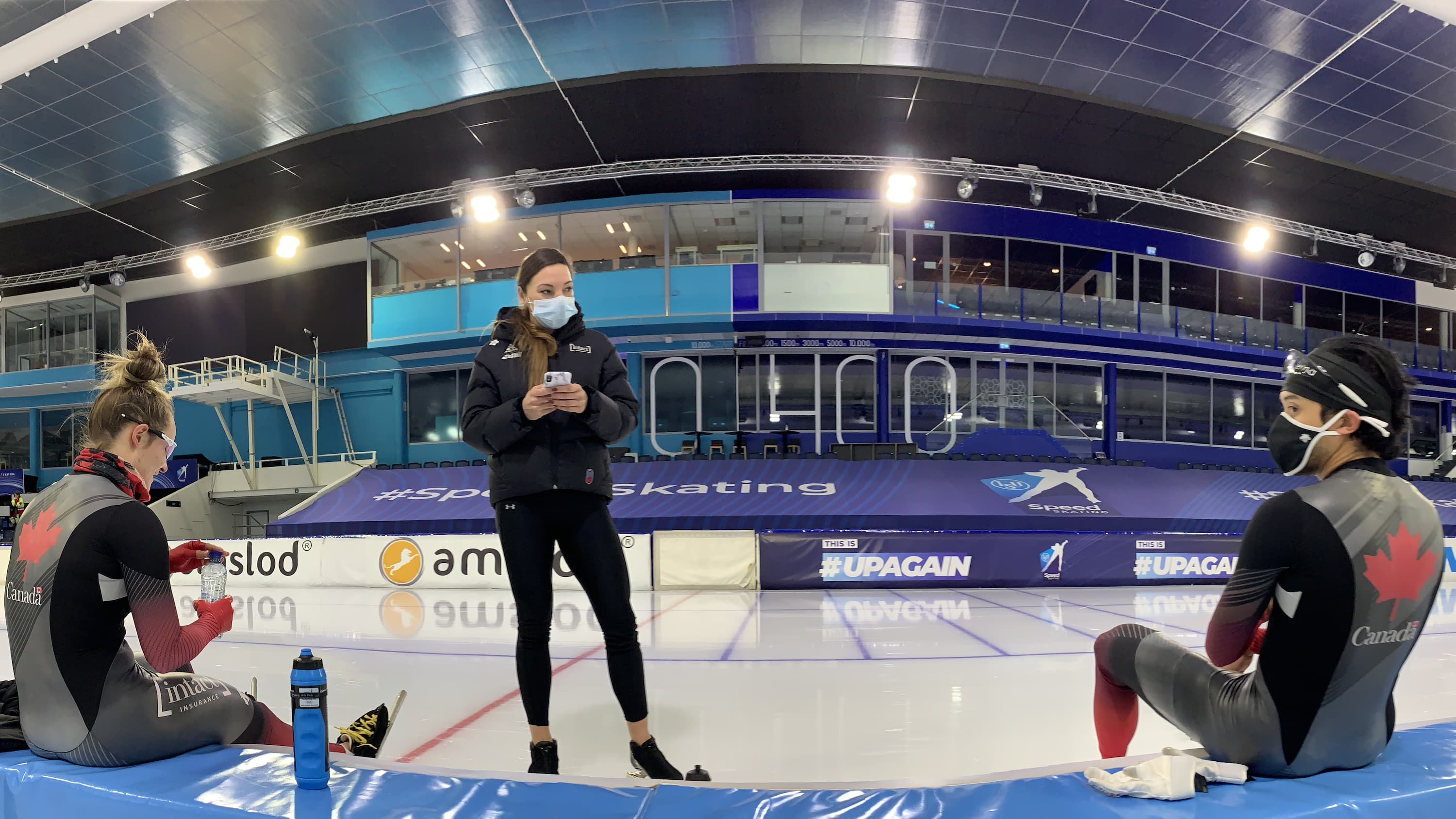 CBC Sports’ Anastasia Bucsis talks with world champion and Olympic medallist Shannon Rempel of Winnipeg, who is relishing the opportunity to work as an assistant coach with Canada’s long track speed skating team, despite the added challenges of training and competing during a global pandemic. 5:05

Brian Stemmle is a four-time Olympian and raced around Europe on alpine’s World Cup for more than a decade. He knows the lure the “White Circus” has over people.

“Being a ski racing fan in Europe is like eating wiener schnitzel in Austria — it’s bred into the culture,” Stemmle says.

“Driving from race to race, throughout Europe we’d sometimes stop for lunch at an Autogrill or walk into a pizzeria in Italy. Often, huddled around a small television, watching an afternoon ski race would be a group of grizzled, ski-racing fans drinking espresso and smoking Marlboro’s.

“The gentlemen were having a social connection through a sport that they had a passion for. Those die-hards made me realize that people I didn’t even know, halfway around the world, cared about the same thing that I loved and that inspired me to try even harder to be a winner.”

Bobsleigh is king in Germany and the 2021 world championships have moved there from Lake Placid, N.Y., the original host, because of the pandemic. They’ve reverted to fertile ground for a beloved and thrilling athletic endeavour.

“Sport brings people together and there are certain places, for certain sports, where the energy is palpable. For bobsleigh that place is Germany,” says Helen Upperton, CBC’s bobsleigh analyst and an Olympic silver medallist.

“They love the sport, they love the rivalries, the danger, the power and precision and they express their love for all the athletes, not just the home team. Sport is so much more than just the race or the match or the game. It’s the undertow that pulls people in the same direction, toward the common bond; a flag, a team, or an athlete. If you somehow managed to win in Germany, you were never forgotten.”

These vivid descriptions of what goes on in exotic places far away are proof that these commentators have travelled the planet to experience the complex, often elusive, attractiveness of sport and can speak to it in the first person.

It’s an altogether intangible power which allows sport to defy the universal threat we now face during the days of COVID-19.

“I’ve never been made to feel like a rock star the way I was when competing in Holland,” Bucsis recalls. “It really touched my heart and reminded me how unifying and wonderful sport is.”

The show must go on

For Stemmle, the ability — even during a pandemic — to follow the action is sustenance for fans the world over.

“Cheering for a sport you love makes you feel like a part of the team,” he reckons. “Like me cheering for the Toronto Maple Leafs, deep down it makes me believe I’m making a difference in the outcome.”

“There is something magical about racing in a country that loves a sport as much as you do,” Upperton concludes.  “Perhaps this passion for human excellence brings out the best in all of us, athletes and fans alike.”

And although it’s a cliché, it amounts to the truth.

In uncertain times the wide world of sport will continue to spin on its axis and the show will most definitely go on.