‘This is too hot for a wedding’: Guest’s racy lingerie-inspired dress sparks outrage as critics accuse her of upstaging the bride – so do you agree?

A woman who wore a ‘revealing’ red dress to her friend’s wedding has been slammed for upstaging the bride with her racy outfit which critics say made her look ‘too hot’.

The debate began when a Reddit account posting under ‘pinacolada12345’ shared a photo of an attractive young couple posing beside a lake in Poland.

‘Hot wedding guests, but talk about stealing attention from the bride with that sheer dress!’ the caption reads.

The man looks smart in a navy suit with a white shirt and black Gucci loafers, but the eye is instantly drawn to the petite blonde under his arm who is clad in a lingerie-inspired ballgown with a bustier style top and a sheer lace skirt.

While the guest looks beautiful, many felt the outfit would have drawn attention away from the bride who should have been the main focus on her wedding day.

‘Someone is making a STATEMENT with that dress! If I had a [body] like that I’d dress like that every damn day. However, I feel like she’s gotta have some beef with the bride – that dress is way too hot for a wedding,’ one woman said.

The attractive couple pose at their friend’s wedding beside a lake in Poland, where the woman wore a racy red gown with a bustier style top and sheer lace skirt

Others acknowledged the dress was stylish but branded it inappropriate for the occasion.

‘If the top part wasn’t sheer it would be okay for a wedding. It’s a cute dress just not this event,’ one woman said.

Do you think the dress is inappropriate for a wedding?

A second agreed, saying: ‘This seems a little inappropriate for a family gathering. You have to dress for the event. It’s a nice dress but not the right place to wear it.’

One woman said she would like to see the guest in the context of the wedding party before casting judgement, because the bride and others could be wearing equally revealing ensembles.

‘I’d be interested to know what the bride, bridal party, and other guests are wearing. While this is much too risqué of a dress for me and my circle, I can see it being the norm for some circles, especially the flashy lifestyle influencer ones,’ she said.

A second photo of the guest posing with the bride shows the newlywed in a long sleeved, V-neck bridal gown with scallop detailing and feather embellishments on top and a loose flowing skirt on the bottom.

Classic in style and silhouette, her dress is decidedly more conservative than her guest’s sultry red frock. 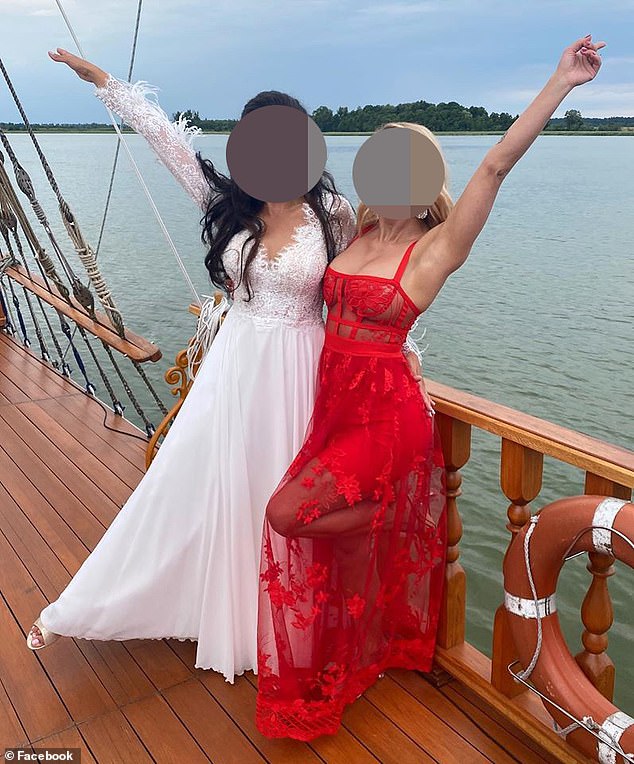 The divisive guest poses with the bride (left), who wears a long sleeved, V-neck bridal gown with scallop detailing, feather embellishments and a loose flowing skirt

However many rallied behind the guest, saying they would have no problem with a friend attending their wedding in a similar design.

‘It depends what circle of friends and family you have. If it was at my wedding, I wouldn’t have a problem. She looks good,’ said one woman.

‘If someone showed up to [my wedding] in this I don’t think I’d give it a second glance. It fits her well and nothing is spilling out, so go for it,’ a second said.

A third said she couldn’t understand why people were angry, saying: ‘She looks stunning. Depending on the dress code this could definitely be appropriate for a wedding.’

Daily Mail Australia has contacted the wedding guest for comment.