Australia’s east coast will be lashed with torrential downpours, hail, and flash flooding as rain-weary residents are told to brace for ‘difficult days ahead’.

New South Wales, Queensland and Tasmania are forecast to receive heavy rain and thunderstorms with the miserable weather expected to continue next week.

Residents in NSW’s northeast and southeast near the Victoria border will be particularly impacted by the deluge with dozens of towns put on alert.

‘There is not a single part of New South Wales that I am not concerned about. It is important everyone stays on alert,’ she told reporters on Saturday.

NSW, Victoria, Queensland and Tasmania will be battered by heavy downpours and thunderstorms as a slow moving low pressure system continues to wreak havoc 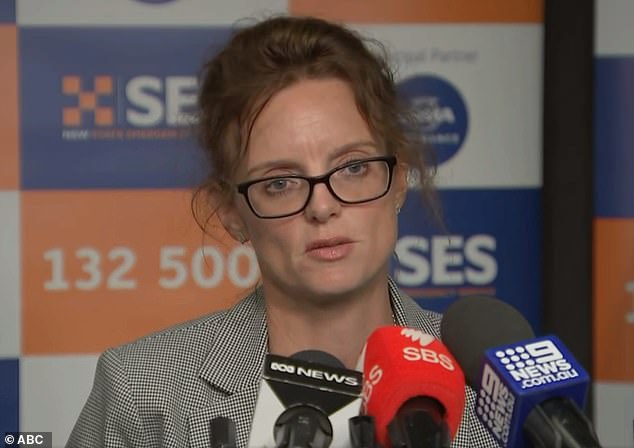 Up to 30,000 sandbags have been handed out in flood-stricken areas as emergency services prepare for an ‘extremely busy’ 24 to 48 hours.

Residents in Lismore will once again brace for major flooding after the embattled town NSW’s northeast suffered two monster floods earlier this year.

Residents in parts of Moree and Carroll Village near Gunnedah were urged to leave their homes on Saturday or risk being engulfed by ‘dangerous floodwaters’.

Those who live on several streets in southwest Narrandera, in the state’s Riverina Region, have been told to evacuate their homes before 6pm on Sunday.

Forecasters warn there is a potential flood risk for the Hawkesbury-Nepean, the Lower Hunter and Colo Rivers on both Monday and Tuesday.

On the north coast, Byron Bay is expected to receive between 60 to 80mm and Coffs Harbour up to 50mm on Sunday as a system moves south from Queensland.

Up to 200 defence personnel will be deployed to Dubbo, Moree and the Northern Rivers in addition to 100 already in the central-west and 50 in the Hunter region. 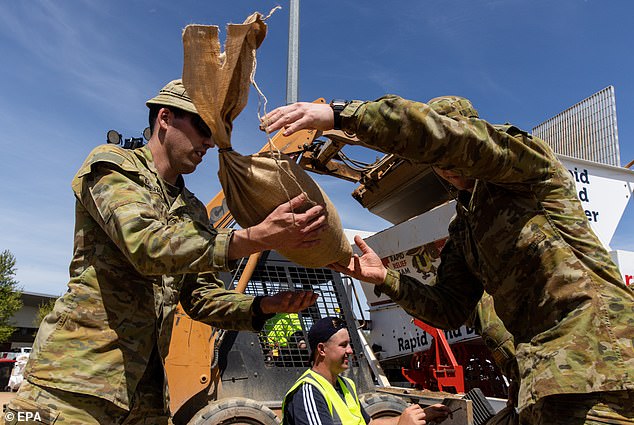 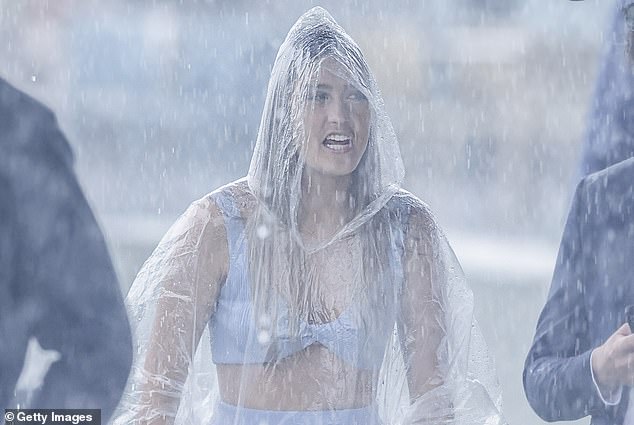 Residents on the east coast been told to prepare for the worst with the heavy downpours expected to last well into next week (pictured, Sydneysider in the rain) 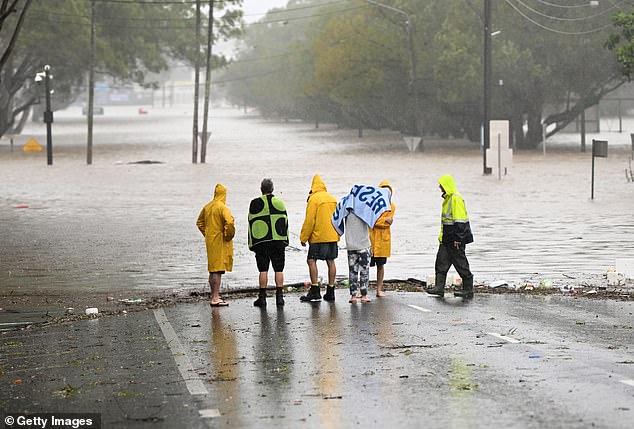 In Queensland, heavy rain will continue to lash the southeast before the system moves offshore and then southward into northeast NSW on Sunday.

Severe thunderstorms and flash floods are possible for the Sunshine Coast with forecasts of up to 300mm of rain for the Gold Coast, Wide Bay and Burnett areas.

An emergency alert has been issued for Brisbane for heavy rainfall, thunderstorms and flash floods for the next 48 hours.

Residents were told by local council to ‘prepare your home, warn neighbours and take care when driving’.

Those in Gympie, Noosa and the Fraser Coast have been told to secure their belongings and stay off the roads amid warnings of flash-floods.

Queensland Fire and Emergency Services issued a warning for Redlands council residents who are at risk of flash flooding over the following two days.

‘Remain alert by monitoring the local media and the Bureau website,’ QFES has urged all Queenslanders on Saturday afternoon.

A major flood warning remains in place for the Macintyre River as its major flood level is expected to reach more than 8.5m on Saturday evening in Goodiwindi.

A driver was winched to safety after their car was swept off the causeway near the Bauple Drive-Bruce Highway exit in the state’s Fraser Coast Region on Friday. 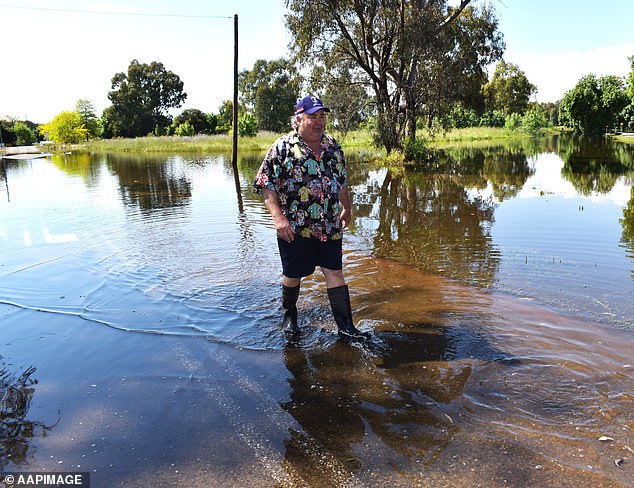 A resident in Forbes, in the central west region of NSW, walks along a flooded road after heavy rain led to flash flooding in the city on Monday 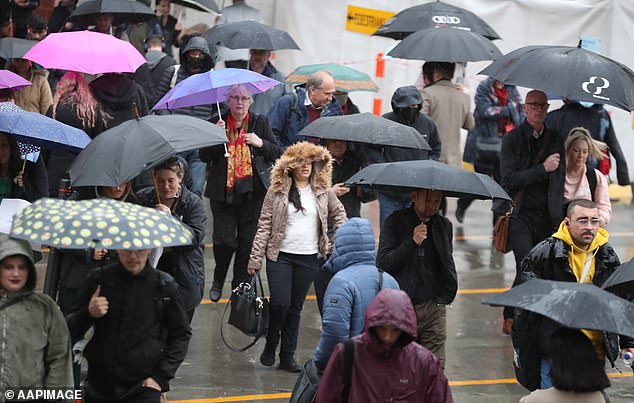 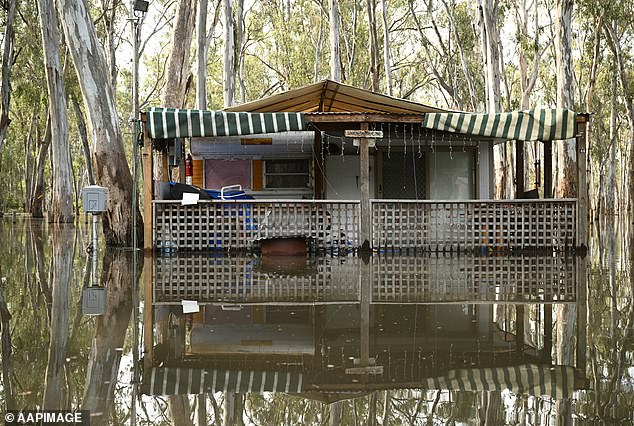 Regional Victoria has been hit by widespread flooding with Shepparton primarily affected (pictured, floodwaters in Shepparton on Tuesday)

Tasmanians have also been warned to brace for wild weather, with a flood watch actively monitoring rivers in the north as well as the Derwent River and Coal River.

‘More significant falls are possible in the Western Tiers and surrounding areas,’ he said. ‘Afternoon thunderstorms are also possible in the southwest today and again tomorrow in the north and northeast, which could lead to isolated heavy rainfall.’

The low pressure system behind it will continue to develop over the coming week.

The SES expects Monday and Tuesday to be the wettest days in the state.

In Victoria, the flood crisis continued to worsen despite easing rainfall, with the Murray River on track to reach a record-high water level. Water levels are now on par with those recorded during the last major flood event in 1993. 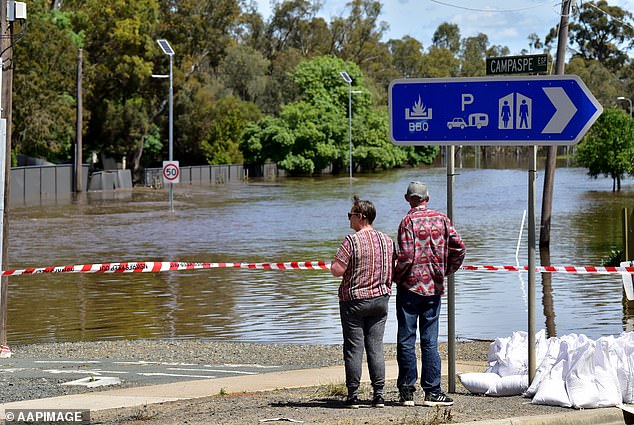 Sky News Weather meteorologist Alison Osborne has warned the wild weather could become worse with the possibility of an East Coast Low forming over the weekend (pictured, flooding in Echuca, Victoria, on Monday) 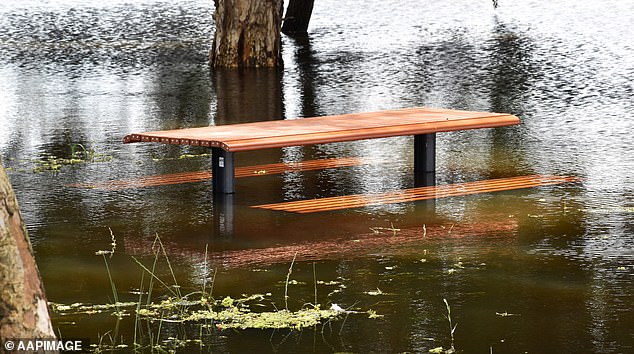 ‘We’re currently seeing water levels around that 94.75m [mark] on the Murray River through to Echuca this morning,’ he said.

‘We are expecting the peak to occur from Sunday night into Monday, around that 95m mark. We’re also keeping a very close eye on the Kerang community. Water levels are at 77.92m as it heads towards a peak of 78m.’

Residents in the northern Victorian town of Kerang are being told it’s too late to leave but the community is standing strong in the face of rising floodwaters.

A bridge connecting the town to the Murray Valley Highway has been closed since Wednesday night, prompting warnings that people could no longer evacuate.

The SES has received more than 8,300 calls for help since the weather emergency began and more than 750 flood-related rescue requests.