EXPRESS INFORMER > News & Politics > Wearing a mask is ‘the most effective way’ of curbing spread of Covid, study claims

Mask wearing is the single best public health measure to stop the spread of Covid other than vaccination, a study has found — despite scientists still being split over their effectiveness at a population level.

A review of more than 30 scientific papers on masks, by Monash University researchers in Australia and the University of Edinburgh, concluded that their widespread can cut Covid rates by up to 53 per cent.

But the academics admit that there is significant variation depending on the type of mask worn, with medical-grade coverings much better than cloth or surgical masks, as well as how someone wears them.

There has been fierce scientific debate about how well the guards work at reducing transmission, despite nearly every country in the world mandating or encouraging their use.

But real-world studies, which involve more scientific rigour, have produced mixed results, with some showing a huge impact on infection rates and others showing virtually none.

It comes as data suggests three in 10 under-30s across the UK have abandoned mask-wearing in public – despite the coverings being a legal requirement in Scotland and Wales.

An international team of researchers have found mask wearing cut Covid transmission by 53 per cent and social distancing reduced the spread by 25 per cent. They also found handwashing was effective, cutting Covid transmission by 53 per cent however they added the limited number of studies they were able to analyse meant this statistic was not significant

In addition to masks, the new study, published in the BMJ, also found handwashing and social distancing helped curb the spread of virus between members of the public.

Handwashing, similar to masks, was found to reduce Covid transmission by 53 per cent, but the authors said this finding was not statistically significant due to the low number of studies examining.

Social distancing was found to reduce Covid cases by 25 per cent.

They added this is particularly true if a Covid variant emerged that was different enough to not be impacted by the vaccines.

Other anti-Covid public health measures, such as full or partial lockdowns or working from home, were not possible to assess due to the variation in the studies examining these initiatives the researchers said.

Researchers said while vaccines were safe, effective, and saved lives, they did not offer 100 per cent protection from Covid making it critical that people do what they could to reduce transmission rates.

The findings come as fresh data from the Office of National Statistics (ONS) shows 29 per cent of Britons under-30-years-of-age didn’t wear a mask when they went outside their home in the last week. 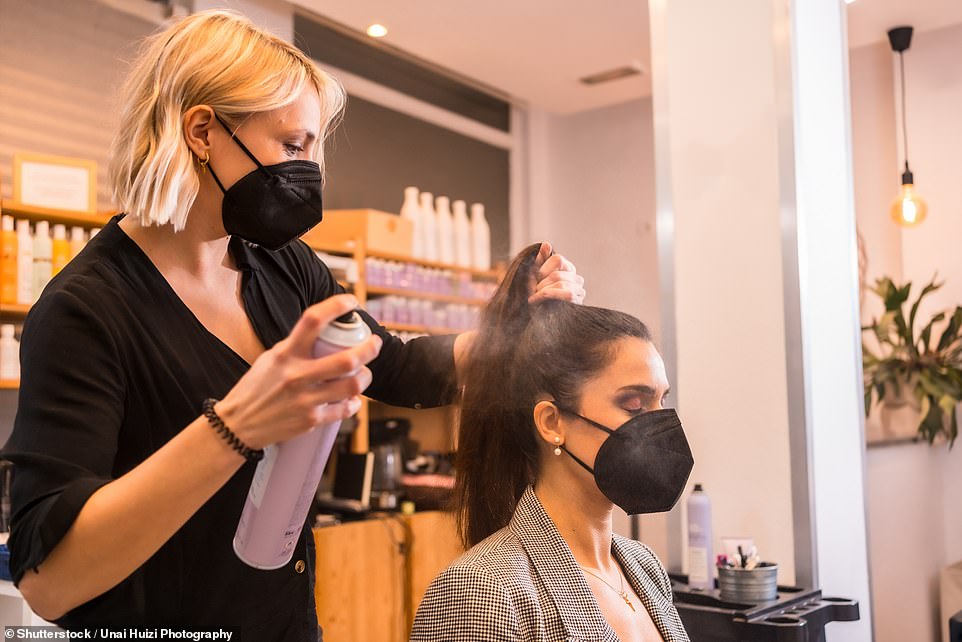 Compulsory mask wearing in the UK depends on which nation you live in, with England having abandoned the practise in July 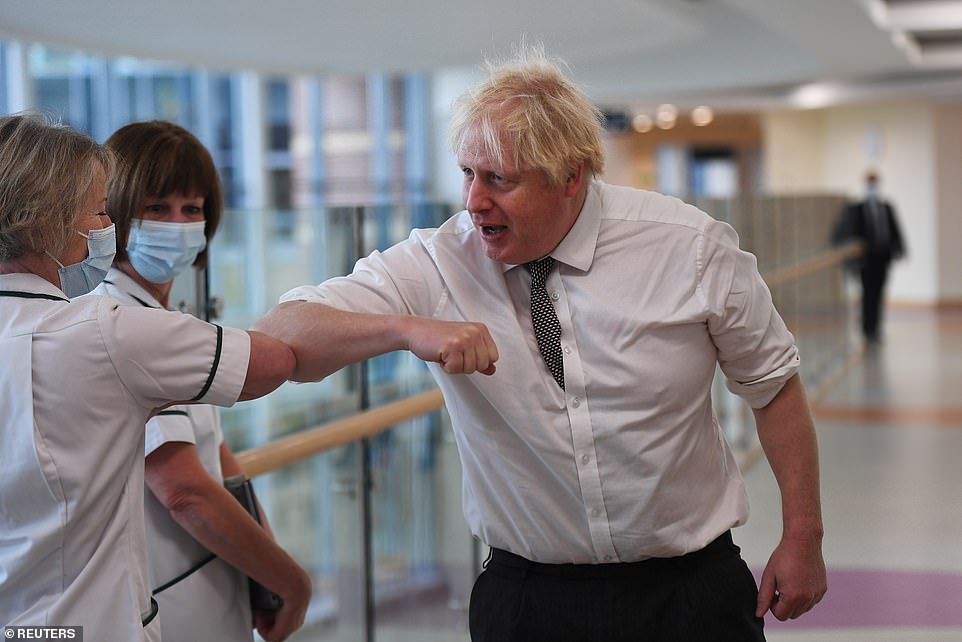 Mask wearing in England is still required in healthcare settings as Boris Johnson recently fell afoul of during a visit to Hexham General Hospital in Northumberland . His brief failure to wear a mask was a source of controversy last week

Masks in healthcare settings, who should and shouldn’t wear one

While mask wearing was phased out as a legal requirement in most places on July 19 people still need to wear them in health settings like hospitals and care homes.

This is to help protect vulnerable people like the elderly or those undergoing cancer treatment, as well as staff who interact with them from a possible Covid infection.

There are exemptions however, with the following groups some of those not required to wear masks:

Outside of health settings official Government guidance is that the public should wear masks in crowded and enclosed spaces where you come into contact with people you don’t normally meet, such as public transport.

The ONS gathered data on mask usage which shows adherence to wearing masks rises as people get older.

When you need to wear a mask in the UK is currently dependent both of what you are doing and where in the country you live.

In England compulsory mask wearing was ditched in indoor settings was ditched in July as part of the so-called ‘Freedom Day’ removal of pandemic restrictions though people are still required to use them in health and care settings.

Masks are also still recommended to be used in spaces where social distancing is impossible.

In Scotland. Wales and Northern Ireland masks are legally required on public transport and in most indoor venues, with the notable exception of pubs and restaurants.

Exceptions to compulsory mask wearing apply in all countries for people such as young children and for people whose physical and mental disabilities mean they cannot wear a mask easily or safely.

The evidence of using masks to stop the spread of Covid has fluctuated over the course of the pandemic.

Some individual studies, like the new research by the international team, have come out in favour of masks like one from the ONS in September, which found people who did not wear them were up to twice as more likely to catch the virus.

Other studies have found the protection offered differs widely based on what kind of mask is used, with one study finding commonly used blue surgical masks only offered 10 per cent more protection than going bare-face.

Amanda Pritchard become the latest health leader to criticise the PM for his trip to Hexham General Hospital in Northumberland last week, after a World Health Organization adviser also took a swipe at him on failing to wear a mask during the trip.

Asked directly whether Mr Johnson should have worn a mask during his visit to Hexham General Hospital in Northumberland, Ms Pritchard said that ‘people should wear masks in healthcare settings’.

But the flustered NHS chief executive, who has only been in the job four months, said: ‘I wasn’t on the visit. So I’m afraid I don’t know the ins and outs of exactly what happened there.’

Pressed on whether she would have told Mr Johnson to put a mask back on, she added: ‘I’m sure my colleagues did encourage everybody there to follow the appropriate guidance.’

The image of the mask-less Prime Minister bumping elbows with masked-up nurses sparked furore on social media, and was cited as yet another example of Mr Johnson failing to follow his own rules.

Mr Johnson has been criticised several times during the pandemic for appearing to go against his Government’s own Covid guidance.

Another recent mask faux-pas was his attendance at Cop26 climate conference in Glasgow, where he was seen without a face covering as he sat next to Sir David Attenborough, 95, in the audience 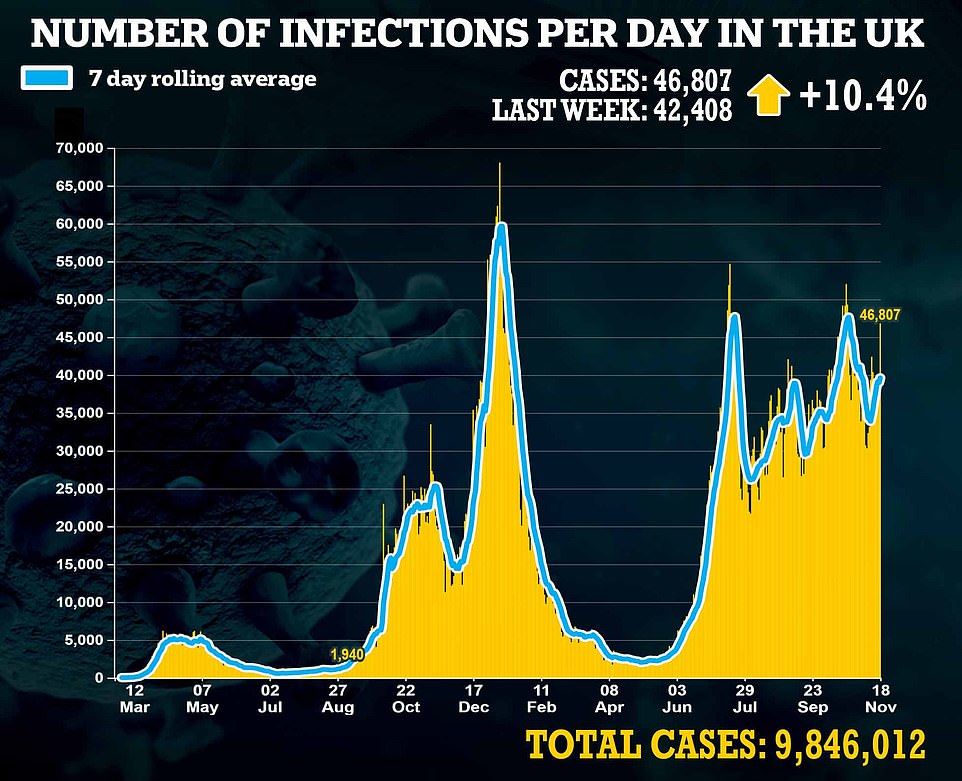 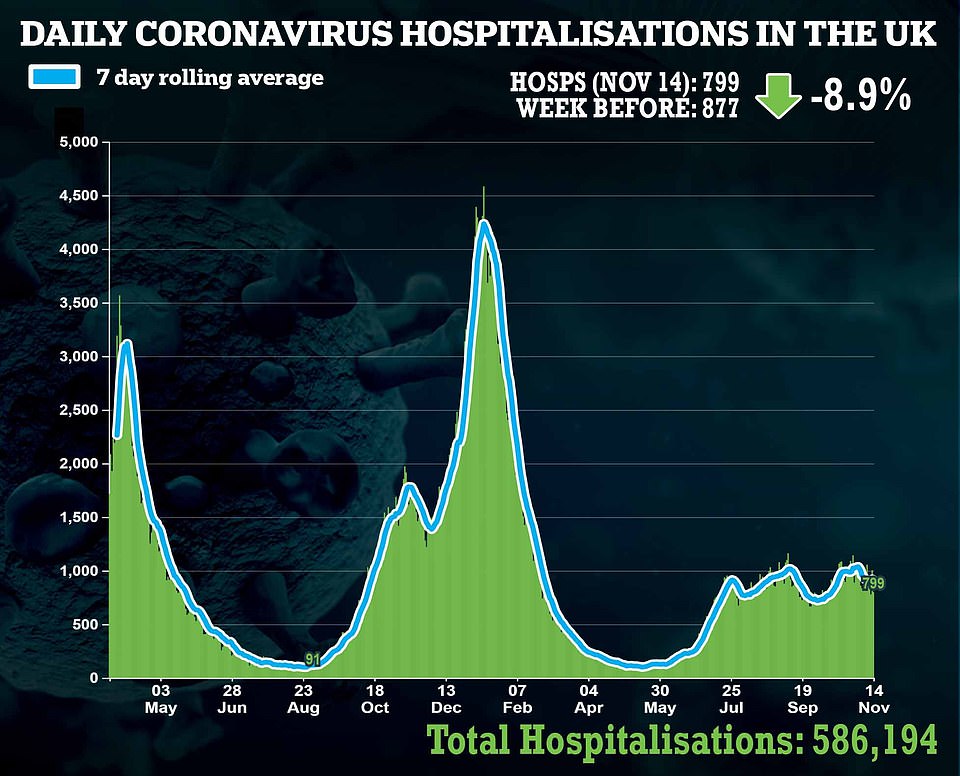 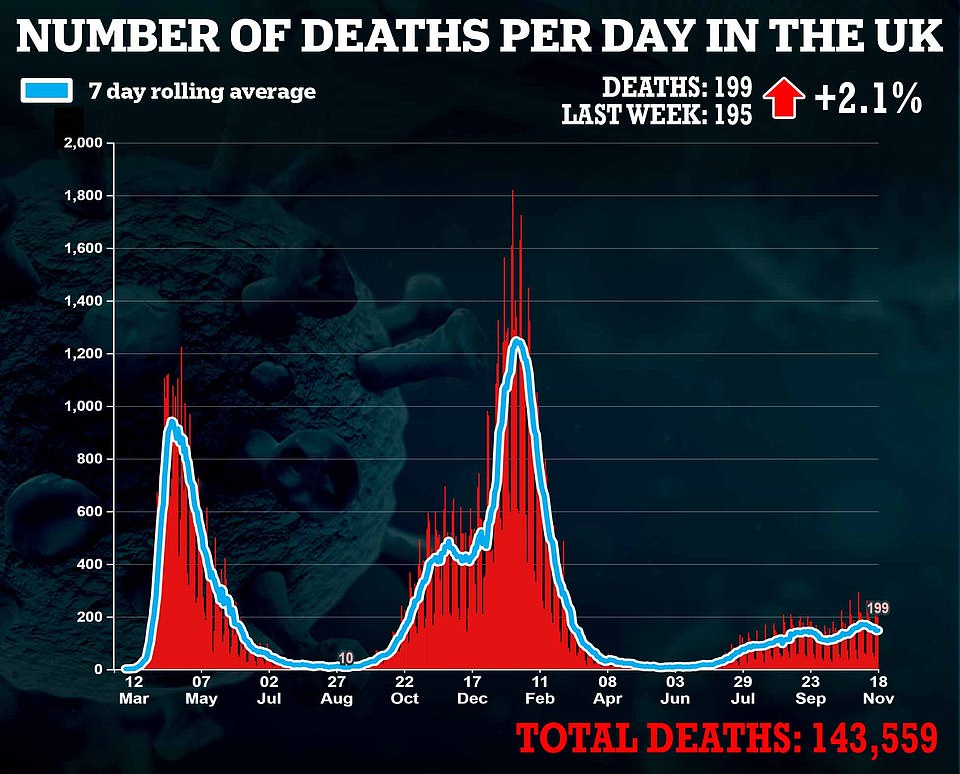