Wearable for cows that ‘neutralises’ methane in their breath and a device that captures particles shed by car tyres have been named among the winners of The Prince of Wales’ inaugural Terra Carta Design Lab.

The initiative invites some of the world’s most talented design students and alumni to design high-impact, low-cost solutions for Nature, People and Planet.

Out of 125 original submissions, four teams of Royal College of Art students and alumni based in London have been chosen as the winners.

These also include aerodynamic nutrient and seed pods made from food waste, that claims to accelerate regeneration up to 10 times, and the first 100 per cent recyclable and chemical-free outdoor performance textile.

Later today, His Royal Highness The Prince of Wales and British product designer Sir Jony Ive will visit the Royal College of Art for the opening of an exhibition showcasing the projects and meet the four winners. 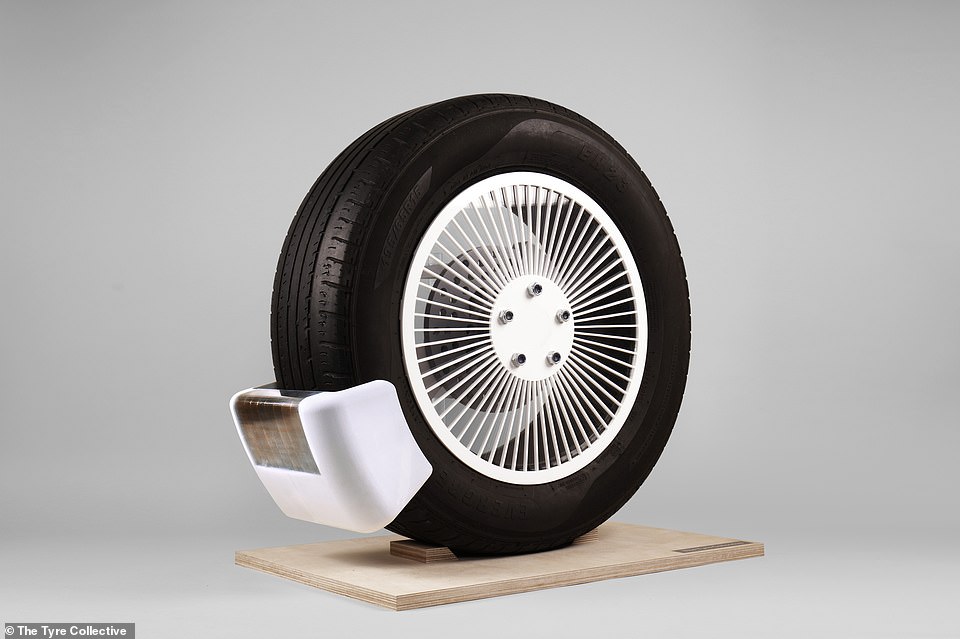 Here’s a closer look at the four winners and their creations, which have all been described as ‘solutions to the environmental crisis’.

Zelp describes itself as an agricultural service that wants to reduce harmful gas emissions while improving animal welfare.

Cows and other farm animals release huge amounts of methane – a powerful greenhouse gas – into the atmosphere through their burps and farts.

So Zelp staff have built a device that fits ‘comfortably’ around a cow’s head without restricting their movement or feeding.

As the cattle exhales, methane travels through a catalyst where it’s oxidized, then released into the air as CO2 and water vapour.

‘The technology precisely tracks methane reduction and key data for farmers, like welfare, efficiency, and fertility metrics,’ the firm says on its website. 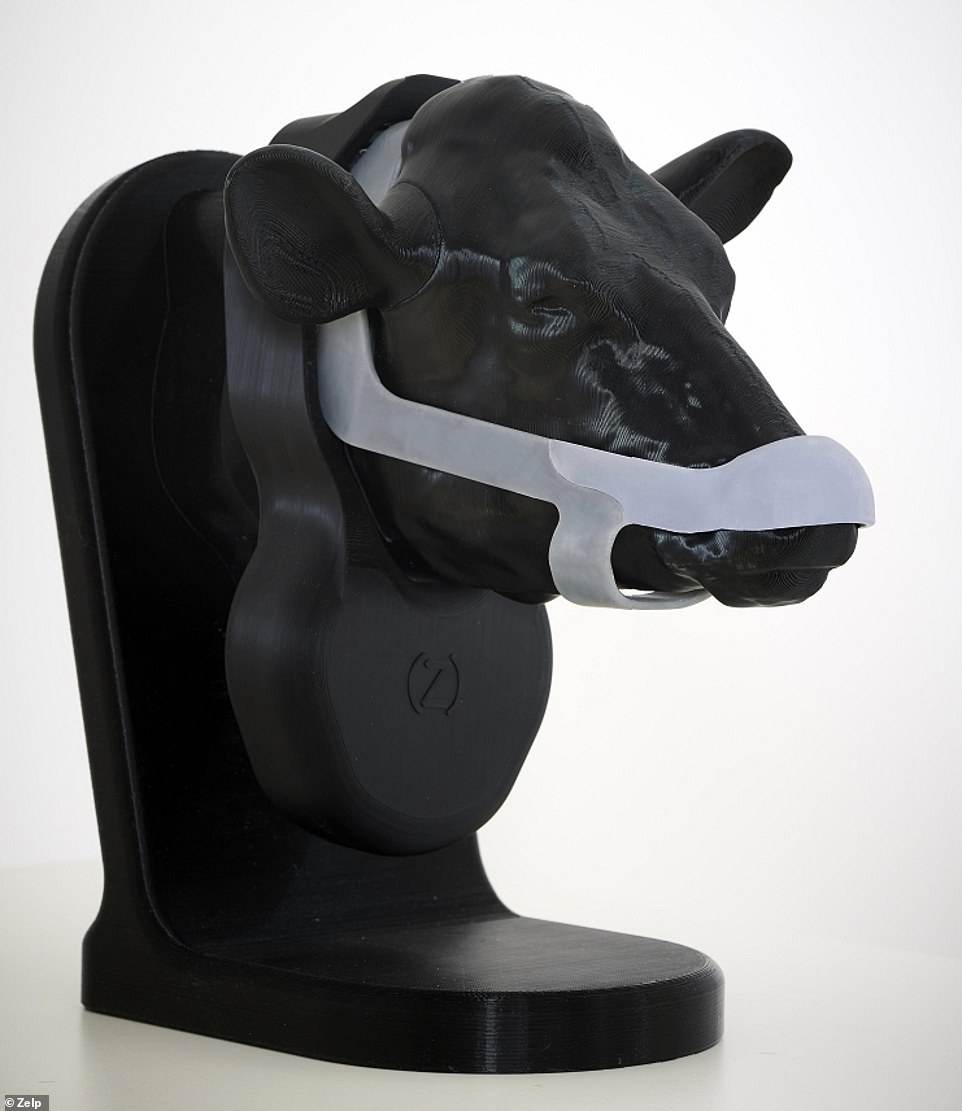 Zelp, a London-based firm, has built a device that fits ‘comfortably’ around a cow’s head without restricting their movement or feeding 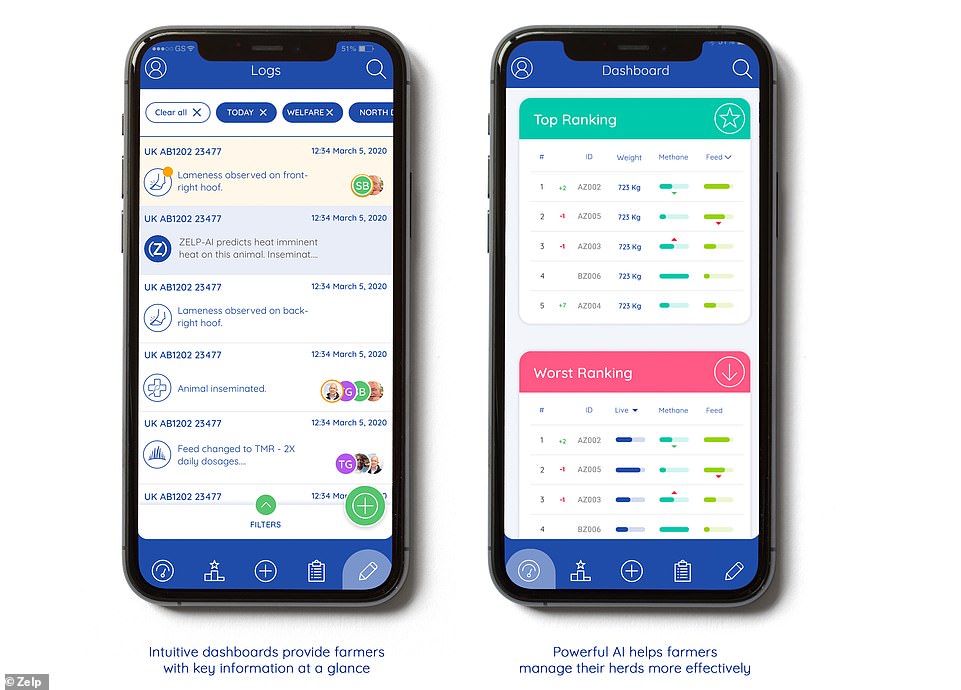 Tyre wear – fragments of vehicle tyres that are worn off in transit – is the second largest microplastic pollutant in our environment, after single-use plastics.

These rubber particles, some too small to be seen by the naked eye, can travel through the air and even be breathed in by roadside pedestrians.

So a firm called the Tyre Collective is developing a patent-pending device that captures tyre wear at the wheel before it can be propelled into the surrounding environment.

The attachable filter uses static electricity to attract tyre fragments, like the static from when you rub a balloon against a sweater.

As well as spearheading the capture and monitoring of tyre wear, the team are exploring upcycling it into new products, such as more ultra-robust tyres. 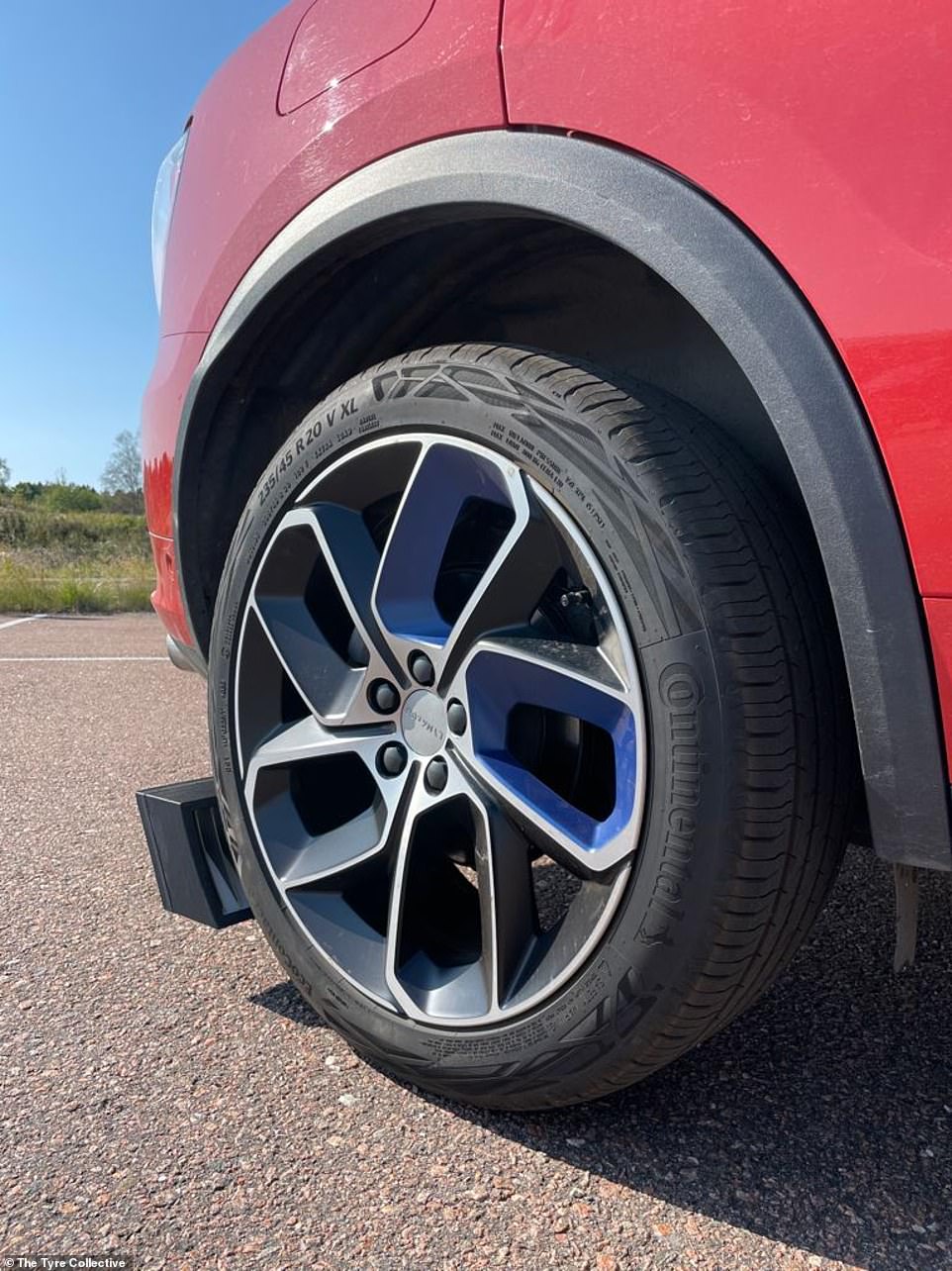 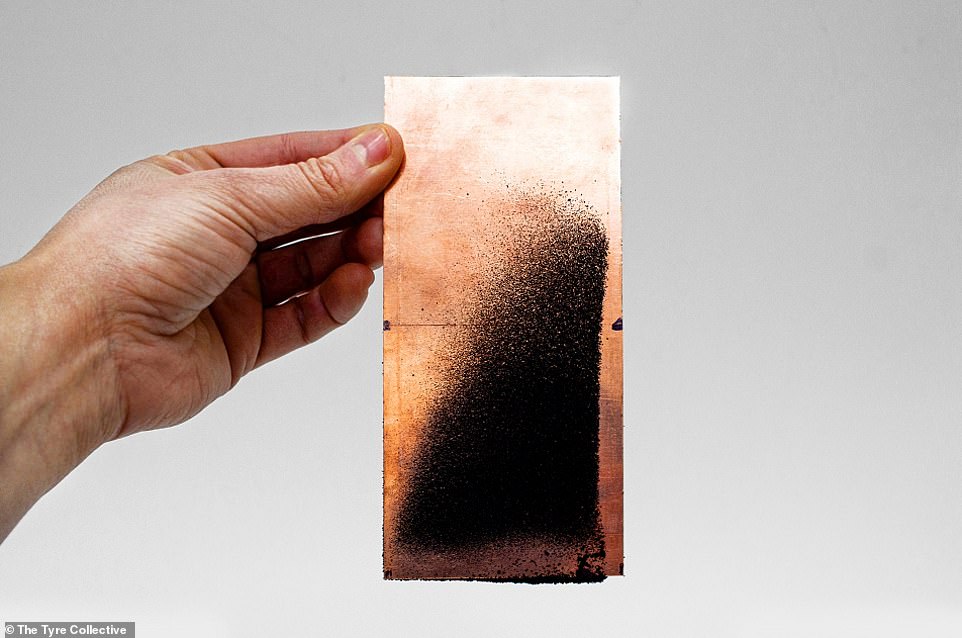 Tyre wear – fragments of vehicle tyres that are worn off in transit – is the second largest microplastic pollutant in our environment, after single-use plastics 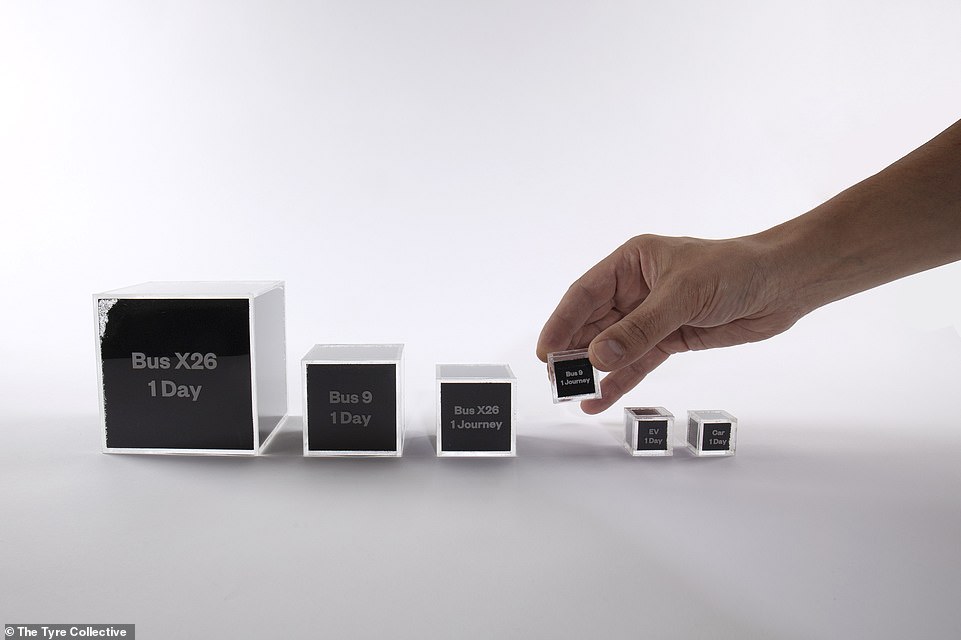 Photo shows the amount of tyre wear produced by London buses, electric vehicles and cars. The No. 9 London bus, on average, releases 4.65g per journey and a total of 65g a day. (Car and EV quantities based on a 16km UK average commute per day)

Current performance outdoor textiles are impossible to recycle and use many harmful chemicals, meaning they face either landfill or incineration when they’re disposed of.

Conversely, Amphitex will be made from a combination of recycled and plant-based feedstock, resulting in a carbon negative textile.

Amphibio said it is also creating an artificial gill to dramatically reduce the weight of heavy tanks used in diving equipment. 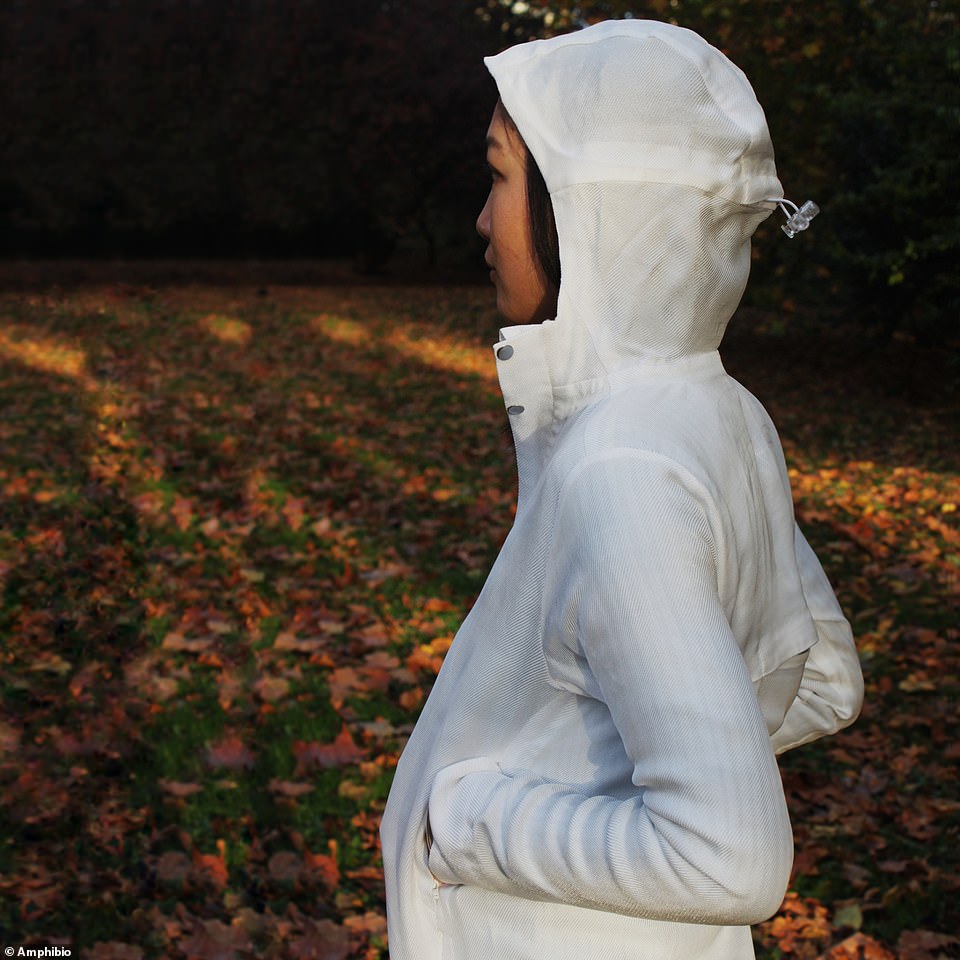 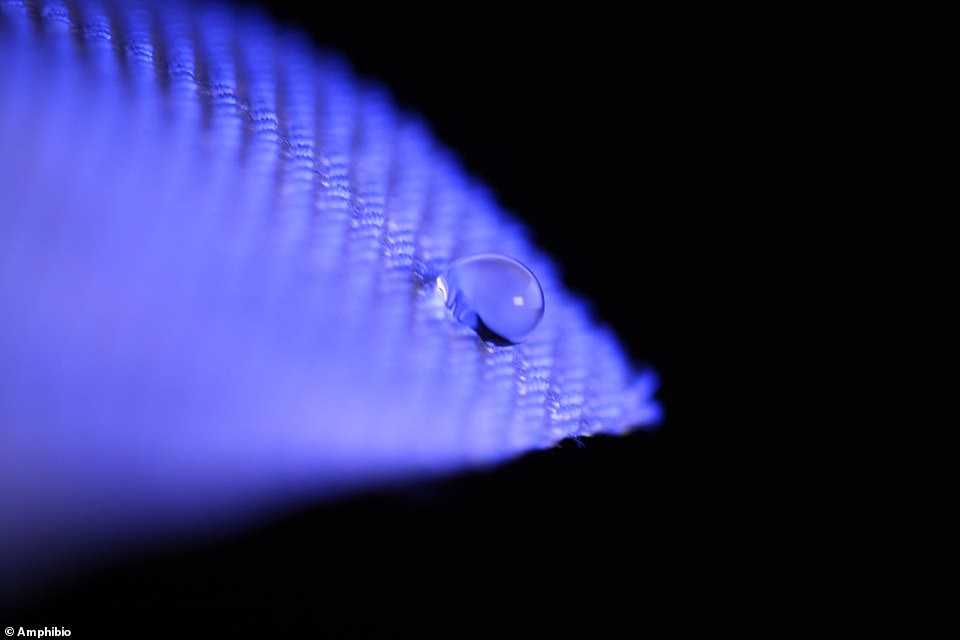 Amphitex will be made from a combination of recycled and plant-based feedstock, resulting in a carbon negative waterproof textile

Lastly, Aerseeds are described as aerodynamic seed pods made from food waste – although they look like simple paper airplanes.

Mimicking natural processes, Aerseeds are carried by the wind to cover large areas and reach difficult terrains where they deliver nutrients and seeds to soils depleted by human activity.

In this way, they are essentially human-made seed dispersers that ‘work with nature to accelerate regeneration up to 10 times’. 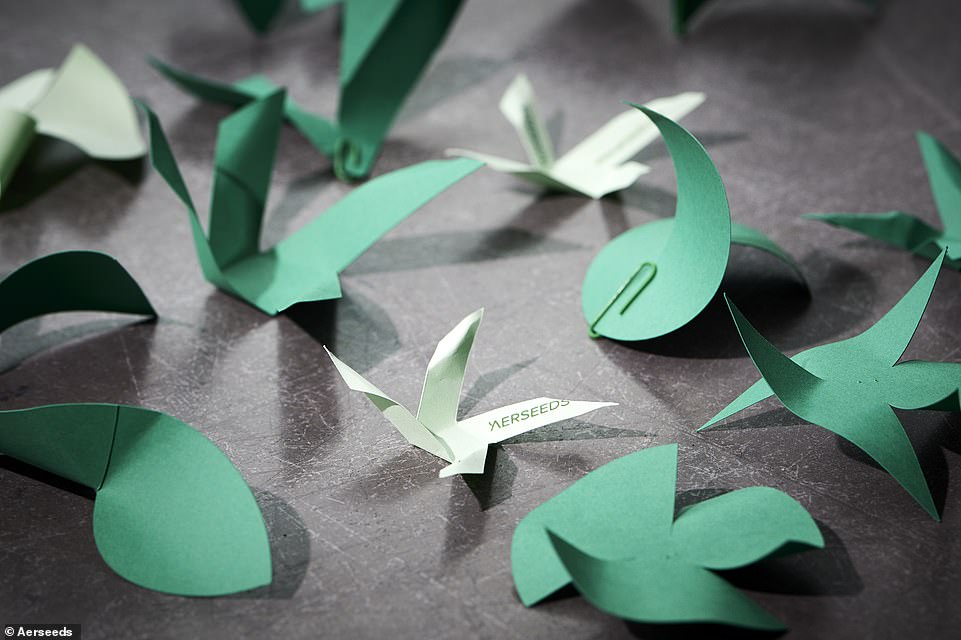 Aerseeds: Aerodynamic nutrient and seed pods made from food waste, that work with nature to accelerate regeneration up to 10 times

All winners will receive £50,000 funding and mentoring from Sir Jony Ive and the corporate members of the Sustainable Markets Initiative.

Sir Ive, who notably worked at Apple from 1992 to 2019, said: ‘All the Design Lab winners have ideas and designs that deserve to be developed.

‘The ingenuity and determination of these designers has produced some extraordinarily creative responses, and they now embark on the journey to turn these great ideas into practical solutions.

‘We can all have good ideas. I find it reassuring, particularly facing the overwhelming challenge of climate change, that we can all contribute ideas that could evolve into valuable solutions. I love not only the power of a good idea but how egalitarian and inclusive they can be.’

THE ENVIRONMENTAL IMPACT OF FARMING COWS

The livestock animals are notorious for creating large amounts of methane, which is a major contributor to global warming.

Each of the farm animals produces the equivalent of three tonnes of carbon dioxide per year and the amount of the animals is increasing with the growing need to feed a booming population.

Methane is one of the most potent greenhouse gases, trapping 30 times more heat than the same amount of carbon dioxide.

Scientists are investigating how feeding them various diets can make cattle more climate-friendly.

They believe feeding seaweed to dairy cows may help and are also using a herb-rich foodstuff called the Lindhof sample.

Researchers found a cow’s methane emissions were reduced by more than 30 per cent when they ate ocean algae.

In research conducted by the University of California, in August, small amounts of it were mixed into the animals’ feed and sweetened with molasses to disguise the salty taste.

As a result, methane emissions dropped by almost a third.

‘I was extremely surprised when I saw the results,’ said Professor Ermias Kebreab, the animal scientist who led the study.

‘I wasn’t expecting it to be that dramatic with a small amount of seaweed.’

The team now plans to conduct a further six-month study of a seaweed-infused diet in beef cattle, starting this month.