We WILL keep firepower to fight another Falklands: Defence Secretary reveals Britain will retain its ‘tier one’ military power and invest more in electronic warfare including drones

By Larissa Brown For The Daily Mail

Britain will retain its ability to wage war as a ‘tier one’ power, the Defence Secretary insisted yesterday.

Ben Wallace said the Armed Forces had the strength to fight another Falklands alone and would invest heavily in electronic warfare. However the Ministry of Defence is preparing for its funding to be further cut due to the financial fallout from the pandemic.

A review, which is due to be published in November, is examining ways to save cash and modernise at the same time.

Armed forces minister Ben Wallace, pictured, said: ‘We should always plan to rely on different allies, but we should also be able to fight a war where we can do things on our own’

In an interview with the Daily Mail, Mr Wallace outlined his ambitions, saying: ‘We should always plan to rely on different allies, but we should also be able to fight a war where we can do things on our own.

‘We are never going to give up our ability to provide for ourselves a long-range UK sovereign capability to cover a range of scenarios.’

He said he would not ‘delude’ the Armed Forces by telling them they would not be able to fight a Falklands again: ‘Obviously how we would do the Falklands, it would probably be different to how we did it last time.’

The UK would still use submarines, planes, probably an aircraft carrier and infantry, he confirmed, adding: ‘We will keep all of that. It is our intention still to be a tier one power, but we have to be a modern power.’

He said lessons had to be taken from countries that had failed to update their military doctrines.

But armour will still be important: ‘We are not scrapping all the tanks. We will still always have a requirement – at the moment until technology changes – for elements of armour, both heavy and light.’ 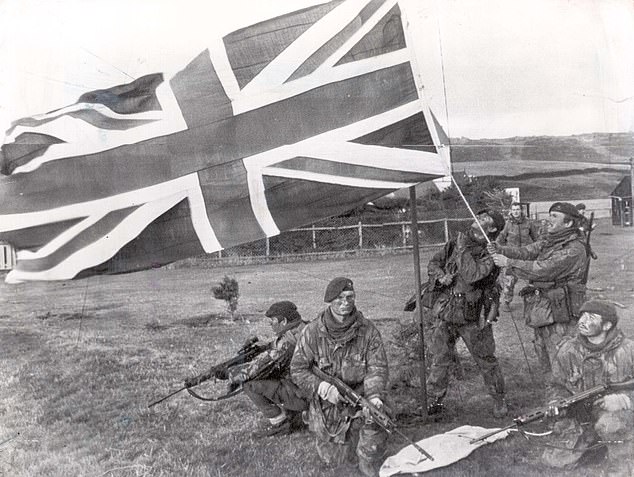 Mr Wallace said an armoured division today would be different from one in the 1980s but must still provide a lethal force and mobility.

Paving the way for cuts he questioned whether an army of the future needed massed units if it had already softened up the enemy by using ‘long-range and deep fires’.

This was a reference to artillery, warplanes and naval bombardment – tactics deployed by Russia in its attack on Ukraine.

He said: ‘There’s no point us trundling along if the Russians can pick us off in the way they picked off the Ukrainians, with deep fires, deep artillery, 50, 60, 70km away.

Mr Wallace was speaking on a visit to Qatar and Oman, where he announced a further £24million investment in a logistics hub at Duqm. The move will triple the size of the UK base, which will be used by Royal Navy aircraft carriers.