By Sam McPhee For Daily Mail Australia and Aap

Calls for more Australians to receive a fourth Covid vaccination are mounting as case numbers and hospitalisations rise around the country due to the latest immunity-evading strain.

The new wave of BA4 and BA5 subvariants are ripping through Australia due to high transmissibility, with early data suggesting the strands are better at avoiding both natural and vaccine protection.

On Wednesday, there were 3,781 people with COVID-19 in hospitals across the country, the highest level since the height of the Omicron wave in February.

The Australian Technical Advisory Group (ATAGI) will announce Australians over the age of 30 will be eligible for a fourth jab as soon as next week in response to rising figures.

Queensland’s chief health officer Dr John Gerrard said the new forms of the virus are not expected to peak until late July or early August.

‘It’s very likely that either you or someone you know close to you will be infected, it will be very common. My message is it’s important for you to prepare now,’ he said, urging the take-up of boosters.

There were 3,781 people in hospital with Covid on Wednesday – the highest Australia has seen since the height Omicron wave in February

Discolouration of fingers or toes

Federal Health Minister Mark Butler said he doesn’t expect to get ATAGI’s official advice on the extra shot until Friday.

Mr Butler also warned Australia is in the early stages of a fresh wave of Covid-19.

‘Case numbers are rising, hospitalisations are up by several hundred just in the fortnight, and most state governments and the federal government are projecting that that’s going to continue for some time yet,’ he said in Adelaide.

The Therapeutic Goods Administration announced on Wednesday it had granted two provisional determinations to Pfizer Australia for its vaccines Comirnaty Omicron and Comirnaty Bivalent.

It means Pfizer is now able to apply to the TGA for provisional registration of the two vaccines and seek authorisation to bring them to market.

This means more Aussies will be able to protect themselves against the new BA4 and BA5 subvariants. 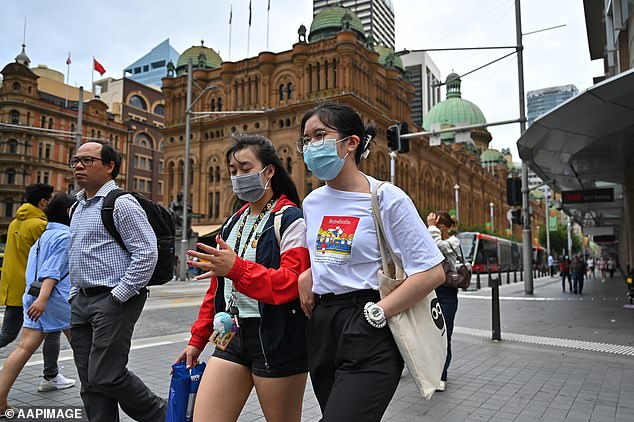 The new wave of BA4 and BA5 subvariants are ripping through Australia due to high transmissibility, with early data suggesting the strands are better at avoiding immunity

As the nation grapples with rising case numbers, Prime Minister Anthony Albanese says immunisation experts will look at available evidence before making a recommendation on a broader fourth dose rollout.

‘The pandemic isn’t over, so my view is that (Australia) will inevitably follow what has occurred in other parts of the world and roll out a further booster shot,’ he told reporters in Sydney on Wednesday.

‘I’d encourage people who haven’t had their booster shots to go out there if they’re eligible and do it as a matter of urgency.’

A fourth dose is currently available for Australians aged 65 and older and vulnerable people.

The Australian Technical Advisory Group on Immunisation (ATAGI) was expected to discuss the benefits of expanding the fourth dose eligibility at its meeting on Wednesday.

But federal Health Minister Mark Butler told Radio 3AW he did not expect to get ATAGI’s official advice on extra booster shots until Friday after the group had worked on the details of their decisions.

Victoria has extended its pandemic declaration by three months until at least October 12.

NSW Health Minister Brad Hazzard also warned that anyone who isn’t fully vaccinated is ‘crazy’ as the state braces for a third wave to peak.