Watching more than 4.3 hours of television a day can increase the chance of developing coronary artery disease (CAD) by 42 per cent, a new study has found.

CAD is a condition caused by a build up of plaque in the vessels which can turn into dangerous clots – cutting off blood supply to the heart and brain.

The average Briton watches around 2.8 hours of TV a day, but exceeding this limit by 90 minutes has significant health implications.

Genetic analysis of more 400,000 Britons also revealed 145 chunks of DNA which are linked to watching TV.

Similar genetic connections to other sedentary behaviours — such as using a computer for several hours or long drives —was also discovered, but there was no link between these and coronary artery disease, the study found.

The average Briton watches around 2.8 hours of TV a day, but exceeding this limit has health implications. The couch potato link was not seen for people who spend the same amount of time in front of a computer screen (stock)

Coronary artery disease (CAD) clogs up the blood vessels and can lead to angina, strokes or heart attacks

Coronary artery disease occurs when the major blood vessels that supply the heart with oxygen and nutrients become damaged.

CAD affects more than 1.6million men and one million women in the UK, and a total of 15million adults in the US.

It is usually due to plaque and inflammation.

When plaque builds up, it narrows the arteries, which decreases blood flow to the heart.

Over time this can cause angina, while a complete blockage can result in a heart attack.

Many people have no symptoms at first but as the plaque builds up they may notice chest pains or shortness of breath when exercising or stressed.

Other causes of CAD include smoking, diabetes and an inactive lifestyle.

It can be prevented by quitting smoking, controlling conditions like diabetes or high blood pressure, staying active, eating well and managing stress.

Drugs can help to lower cholesterol, while aspirin thins the blood to reduce the risk of clots.

In severe cases, stents can be put into the arteries to open them, while coronary bypass surgery creates a graft to bypass the blocked arteries using a vessel from another part of the body.

Data of 422,21 middle-aged people in the UK provided by the UK BioBank was scrutinised by researchers from the University of Groningen to find a link between genes and sedentary behaviours.

This includes time spent on the computer, in front of the TV screen or driving a car.

Genetic analysis of these people found 169 genetic loci linked to such behaviours —145 associated with watching television, 36 with computer use and four with driving, with 16 genetic regions linked to two separate traits.

Dr Niek Verweij told MailOnline people aged between 40 and 69 who watch more than 4.3 hours of TV a day – 1.5 hours above the 2.8 hours average – are 42 per cent more at-risk of developing CAD.

The exact way in which watching TV for extended periods of time increases the risk of CAD is unknown.

However, the researchers suggest watching TV may be linked to increased CAD risk because of fewer and shorter breaks, and lower energy expenditure with increased snacking compared to other sedentary behaviours.

He explains in the study that this is because this age group cohort is the one which spends the most time watching television.

His warning comes at a time when millions are sat at home watching more TV than usual because of the lockdown.

He used an analytical technique called Mendelian randomisation to compare gene mutations linked to a potential risk factor with rates of an illness.

Dr Verweij said: ‘What we find is extra evidence that sedentary behaviour, such as TV watching, may be a causal risk factor for the development of cardiovascular disease.’ 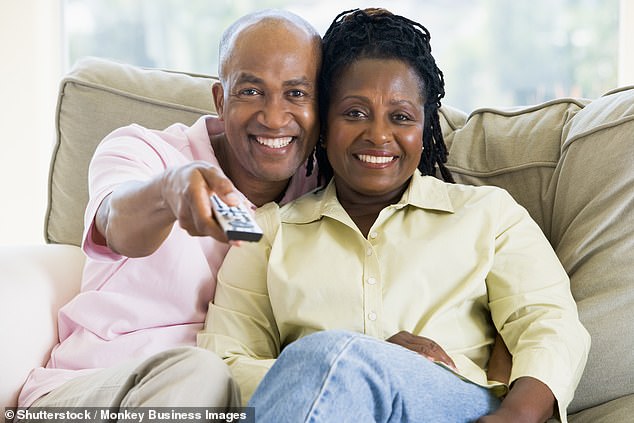 Genetic analysis of more 400,00 Britons revealed 145 chunks of DNA linked to watching TV. Similar genetic connections to other sedentary behaviours — such as using a computer for several hours or long drives —was also discovered, but there was no link between these and coronary artery disease, the study found (stock)

The correlation however, did not extend to time spent in front of a computer screen.

Dr Verweij added: ‘It is not risky to watch TV. It is the amount of TV watching and also the lifestyle that goes with watching many hours of television, which we can’t separate out in this study, that is risky.

‘It is the total lifestyle that goes with watching many hours of TV that is bad, and it is difficult to separate that out, even in this study.

‘I think it would be wise for someone to rethink their behaviour if they are sitting in front of the TV for six hours straight year-in-year-out.

‘But in light of the lockdown, if someone was healthy, has a good lifestyle, and just has two weeks of lock-down binge watching, our study can’t say if that is bad.’

He added: ‘It could be sedentary behaviour causes bad health. But it could also be that you don’t recognise symptoms early enough if you are sitting many hours.

‘The main implication of this research is the study provides some extra piece of evidence that sedentary behaviour leads to bad health and should therefore be discouraged. This is in line with other research in this area.’

They note that further research is needed to understand more about how the genes , sedentary lifestyles and health implications relate to one another.