The new clip, captured by the European Space Agency’s Mars Express satellite, comprises 80 individual images that were stitched together.

In the foreground is the irregular-shaped Martian moon Deimos, with its rocky and cratered surface.

In the background is Jupiter and its four largest moons, known as the ‘Galilean moons’ – Europa, Ganymede, Io and Callisto.

Jupiter is the large bright white circle near the centre, while its moons appear as small white specks of light.

The Martian moon Deimos (left) notable for its rocky and cratered surface, can be seen here about to pass Jupiter, which appears as a large white spot. Jupiter’s moons appear as mere specks of light

The Galilean moons are the four largest moons of Jupiter:

Mars Express is still going strong nearly 20 years after its launch from Baikonur Cosmodrome in Kazakhstan in June 2003.

‘The new images demonstrate that Mars Express continues to shine a light on Mars, the immediate surroundings of the Red Planet, and beyond,’ said the European Space Agency (ESA).

The first clip is made up of a series of 80 images taken on February 14, 2022. It first shows Deimos passing in front of Europa, the smallest of the four Galilean moons, known for its icy surface and thin oxygen atmosphere.

The largest moon in the Solar System, Ganymede, is then obscured from view, as is Jupiter, Io and then lastly Callisto.

In the clip, Deimos appears to move up and down in the animation due to the small swaying movements of Mars Express while it rotates to place its camera into position.

Deimos is the smaller and outermost of the two natural satellites of Mars, the other being Phobos. 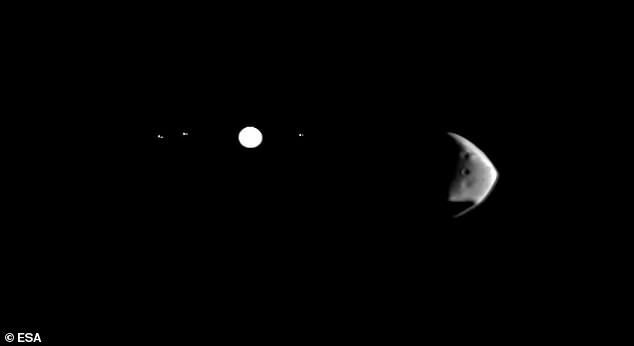 Here, the Martian moon obscures Callisto. Jupiter and the other three Galilean moons are visible to the left 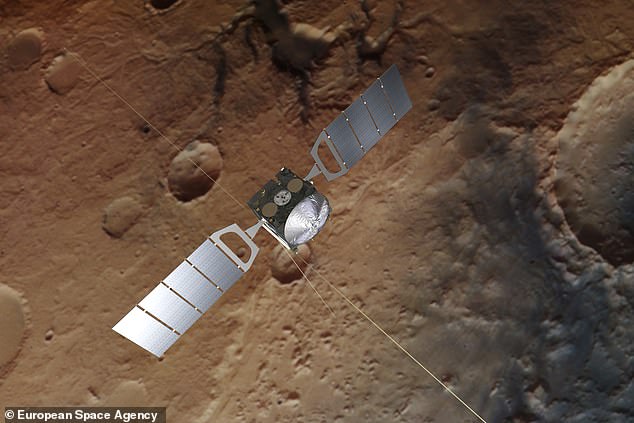 Artist’s impression of the the European Space Agency’s Mars Express satellite, which launched from Baikonur Cosmodrome in Kazakhstan in June 2003

Phobos orbits extremely close to Mars at an average of 3,700 miles and is moving towards the planet, while Deimos is 12,470 miles away on average and moves away from it.

In this second video, Deimos is blocked by its larger sibling, Phobos, which measures about 14 miles along its longest axis. Deimos is a dwarf in comparison – only 3.7 miles. 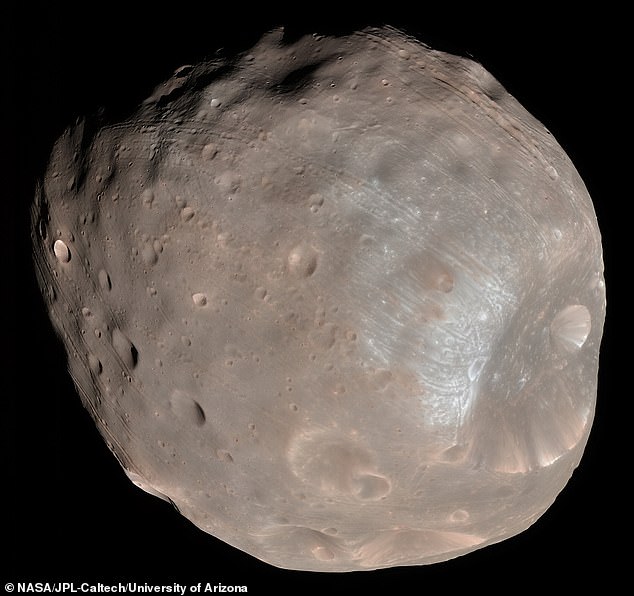 Enhanced colour image of Phobos, the larger of the two Martian moons. It measures 14 miles along its longest axis 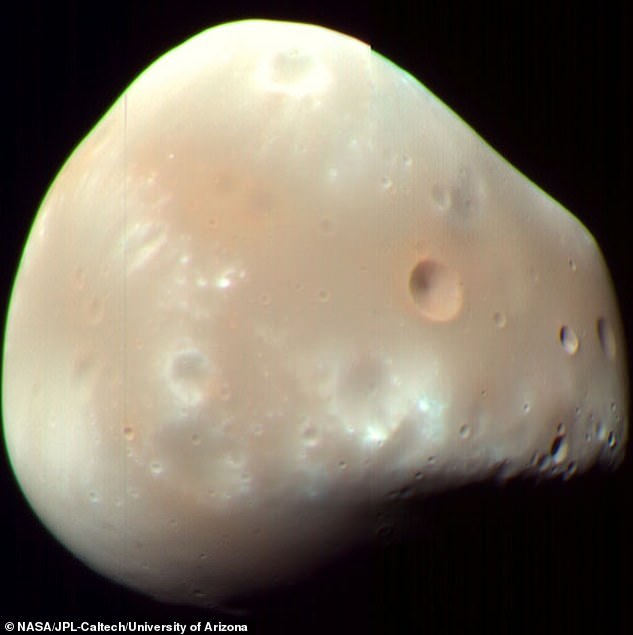 At only 3.7 miles in diameter, Deimos (pictured in this enhanced colour image) is a dwarf in comparison to its Martian sibling

At the time the images were taken, Phobos was 7,618 miles away from the camera, while Deimos was 17,340 miles away.

‘From this perspective it is difficult to see the size difference between the Martian moons,’ ESA said.

Much is still unknown about the formation and composition of Mars’ two moons, although the upcoming MMX mission, led by the Japanese space agency, aims to remedy this.

Set to launch next year, the mission will orbit Phobos and Deimos before landing on Phobos and collecting a sample from the larger moon to return to Earth.

WHAT IS THE EUROPEAN SPACE AGENCY’S MARS EXPRESS SATELLITE?

Mars Express, so called because of the rapid and streamlined development time, represents the European Space Agency’s (ESA’s) first visit to another planet in the solar system.

The spacecraft, launched in 2003, borrowed technology from ESA’s Rosetta mission and the Mars 96 mission.

Since beginning science operations in 2004, the durable orbiter has given scientists an entirely new view of Earth’s intriguing neighbour.

It is now helping to answer fundamental questions about the geology, atmosphere, surface environment, history of water and potential for life on Mars. 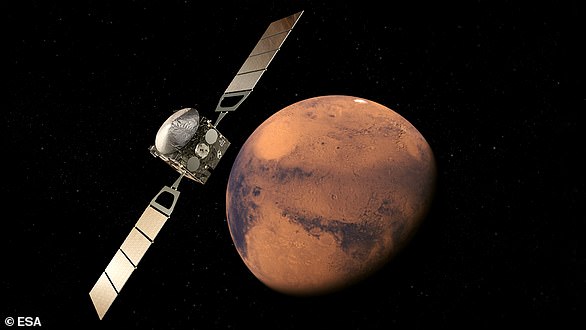 Mars Express, so called because of the rapid and streamlined development time, represents the European Space Agency’s (ESA’s) first visit to another planet in the solar system (artist’s impression)

The spacecraft’s high-resolution camera has sent back thousands of dramatic 3D views of the Martian surface.

One instrument has discovered hydrated minerals that form only in the presence of liquid water, providing confirmation that Mars was once much wetter than it is today.

The first radar sounder ever to orbit another planet has detected subsurface layers of water ice.

Another instrument has detected enough water ice in the polar caps to create a global ocean 36 ft (11m) deep, and revealed vast plains of permafrost around the South Pole.

Mars Express found the highest clouds ever seen above any planetary surface at 62 miles (100km).

The mission found indications of the possible presence of methane, which on Earth is attributed to active volcanism and biochemical processes.

Its highly elliptical orbit has enabled the spacecraft to look beyond Mars, in order to survey its two tiny moons, particularly the innermost satellite Phobos, which has been studied in unprecedented detail.

During its lifetime it has acted as a communication relay between Earth and various NASA spacecraft, including the Phoenix lander and several rovers on the surface.