Couple take down huge warning banner hanging off the side of their £248,000 new build after housing developer Bellway threatened them with legal action

Newlyweds plagued by a flooded garage have taken down a sign blasting the company that built their home.

A banner hanging from the first-floor window of the £248,000 new-build warned potential buyers away from the estate in Ashby-de-la-Zouch, Leicestershire.

Jake Wright, 25, and his wife Chloe, 24, decided to take it down five hours after the developer threatened legal action.

Chloe told The Sun: ‘Bellway pointed out that signage on walls was breach of our contract which, on reflection, was fair enough. But we’re still not happy.’

The couple moved from Ibstock after buying what they thought was their dream house in December 2018. But soon their garage and en-suite had flooded and all three toilets flushed up black slime.

Mr Wright put up a banner outside his house last Wednesday stating: ‘Buying a Bellway Home was our worst decision. Please ask us why’.

He and Mrs Wright were then threatened with legal action and told to take down the sign or risk being taken to court in a letter hand-delivered at 7am on Thursday.

Bellway previously said it was working hard to fix the issues and that the sign breached ‘restrictive covenants entered into at the point of sale’.

The couple have since complained a free patio, promised by the developer to make amends after their ordeal, has been reneged. They are now considering taking legal action of their own.

Mrs Wright said: ‘We got an email saying “We know this will come as a disappointment”. It certainly is, and we’re thinking about taking legal action.’

The couple were sent two letters threatening legal action. One for the banner and another for a Facebook post.

Mr Wright reported the flooding garage to Bellway not long after moving in to the property. A contractor visited and seemingly fixed the issue. 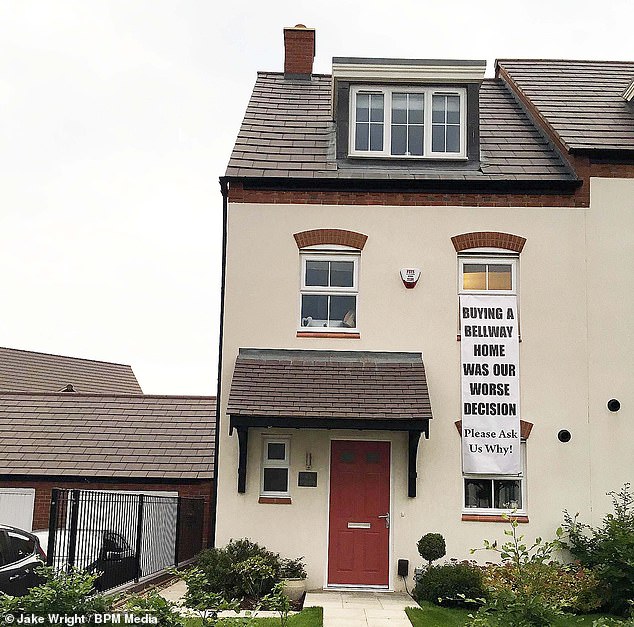 Mr Wright put up a banner outside his house on Wednesday stating: ‘Buying a Bellway Home was our worst decision. Please ask us why’

However, a few weeks later, the couple noticed that the garage was flooded. They asked the developer to fix the issue again.

Mr Wright said: ‘Another couple of men came out and said they knew what the issue was and that it was related to the brickwork.

‘So we let them fix it. They told us they would have to dig up about half of our garden, but we agreed because we wanted it sorted.’

According to Mr Wright, the work took around four weeks to complete and most of it was completed only days before he and Ms Wright got married in November 2019.

Mr Wright’s mother-in-law told the couple while on their honeymoon in Singapore that the garage had flooded again.

He claims the dispute with Bellway over the garage resulted in the National House Building Council (NHBC) visiting to inspect the building.

The company has now suggested that a drain be built inside the garage to prevent the issue from occurring. But Mr Wright says he is not happy with this suggestion. 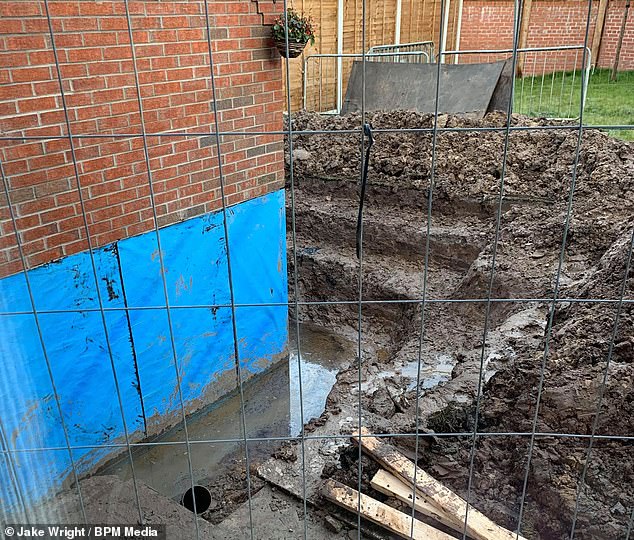 They say the £248,000 new-build has caused them ‘nothing but problems’ after its garage kept flooding from underneath the bricks

‘The NHBC ruled in our favour and said that the building wasn’t up to standard,’ he added.

‘They now want to install a drain in our garage which isn’t really fixing the problem. It’s just putting a bandage on something that was a problem at the start.

‘It’s just one thing after another. We’ve been going back and forth. Me and my wife have had arguments and we’ve been so upset.’

Mr Wright decided to put the sign up outside the house on Wednesday. He and his wife have now been threatened with legal action and have been told to take down the sign today or risk being taken to court.

A spokesperson from Bellway said: ‘While we are unable to comment specifically due to customer confidentiality, we have been working hard to resolve the issues the customer has faced, and we continue to undertake remedial work over and above our warranty commitments.

‘Our legal representatives have written to the customer in order to request the removal of the signage, which is in breach of the restrictive covenants entered into at the point of sale.’