Warming climate and intensive agriculture have almost halved insect populations in some tropical parts of the world, a new study has warned.

Researchers from University College London studied the records of nearly 20,000 insect species from 1992 to 2012.

They found that in areas with high-intensity agriculture and substantial climate warming, the number of insects was 49 per cent lower than in natural habitats.

‘Losing insect populations could be harmful not only to the natural environment, where insects often play key roles in local ecosystems, but it could also harm human health and food security, particularly with losses of pollinators,’ said Dr Charlie Outhwaite, lead author of the study.

Warming climate and intensive agriculture have almost halved insect populations in some parts of the world, a new study has warned. Pictured: a butterfy in Malaysia

Which insects did they study?

In the study, the team set out to assess the interaction between rising temperatures and land use, and insect groups across the globe.

‘Many insects appear to be very vulnerable to human pressures, which is concerning as climate change worsens and agricultural areas continue to expand,’ Dr Outhwaite said.

‘Our findings highlight the urgency of actions to preserve natural habitats, slow the expansion of high-intensity agriculture, and cut emissions to mitigate climate change.

‘Our findings may only represent the tip of the iceberg as there is limited evidence in some areas, particularly in the tropics which we found have quite high reductions in insect biodiversity in the most impacted areas.’

The team analysed 756,879 records for 17,889 insect species, as well as the climate warming and changes in agriculture in the areas where they were found.

Their analysis revealed that insect numbers were 49 per cent lower in areas with high-intensity agriculture and substantial climate warming than in the animals’ natural habitats.

Meanwhile, the number of different species was 29 per cent lower.

In particular, tropical areas saw the biggest declines in insect biodiversity linked to land use and climate change.

In areas where 75 per cent of the land was still natural habitat, insect abundance only declined by seven per cent. 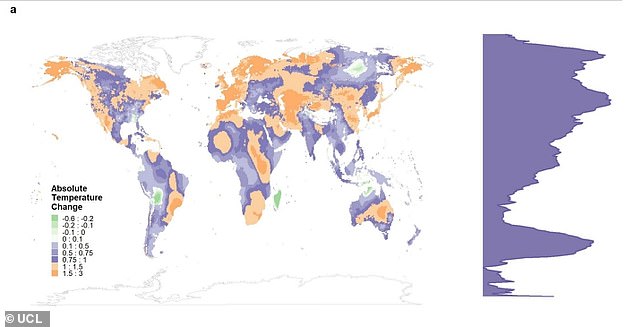 The researchers suggest that insects may rely on plants for shade on hot days, so the loss of their natural habitat could leave them more vulnerable.

Dr Tim Newbold, senior author of the study, said: ‘The environmental harms of high-intensity agriculture present a tricky challenge as we try to keep up with food demands of a growing population.

‘We have previously found that insect pollinators are particularly vulnerable to agricultural expansion, as they appear to be more than 70 per cent less abundant in high-intensity croplands compared to wild sites.

‘Careful management of agricultural areas, such as preserving natural habitats near farmland, may help to ensure that vital insects can still thrive.’

Worryingly, the insect declines could be even worse than the study suggests, according to the researchers, who highlight that they did not account for other effects such as pollution. 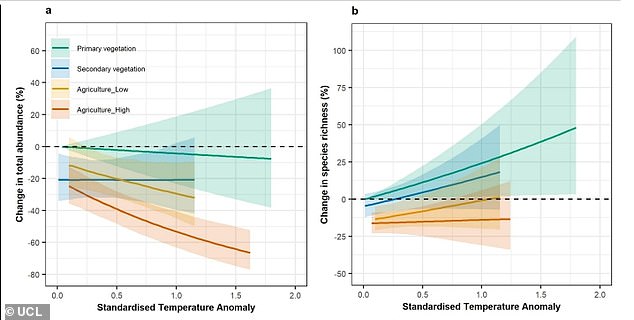 The analysis revealed that insect numbers were 49 per cent lower in areas with high-intensity agriculture and substantial climate warming than in the animals’ natural habitats. Pictured left, the change in total abundance of insects, pictured right, the change in species richness

Peter McCann, joint first author of the study, concluded: ‘We need to acknowledge how important insects are for the environment as a whole, and for human health and wellbeing, in order to address the threats we pose to them before many species are lost forever.’

The study shows that there are likely no insect ‘winner’ from climate warming in the tropics, according to Professor Jane Hill, a professor of Ecology at the University of York, who was not involved in the study.

‘Comparing findings from tropical and non-tropical locations reveals the complexity of these land-use/climate interactions, and unlike non-topical locations, the authors show there are likely to be no insect ‘winners’ from climate warming in the tropics,’ she said.

‘I think the finding that retaining natural habitat in the wider landscape can buffer insect declines in low-intensity agriculture is really important, and gives us hope that we can successfully design landscapes to produce food where biodiversity can thrive.’

A recent study in Canada found that over the last century, the beetles in the region have shrunk.

By looking at eight species of beetle and measuring the animals from past and present they found that some beetles were adapting to a reduced body size.

The data also showed that the larger beetles were shrinking, but the smaller ones were not.

Around 50 million years ago the Earth warmed by three degrees Celsius (5.4°F) and as a result, animal species at the time shrunk by 14 per cent.

Another warming event around 55 million years ago – called the Paleocene-Eocene Thermal Maximum (PETM) – warmed the earth by up to eight degrees Celsius (14.4°F).

In this instance, animal species of the time shrunk by up to a third.

Woolly mammoths were a victim of warming climate, shrinking habitat and increased hunting from a growing early-human population which drove them to extinction – along with many large animals

With the global temperatures set to continue to rise, it is expected the average size of most animals will decrease.

As well as global warming, the world has seen a dramatic decrease in the amount of large animals.

So called ‘megafauna’ are large animals that go extinct. With long life-spans and relatively small population numbers, they are less able to adapt to rapid change as smaller animals that reproduce more often.

Often hunted for trophies or for food, large animals like the mastadon, mammoths and the western black rhino, which was declared extinct in 2011, have been hunted to extinction.