Walmart will begin testing an autonomous vehicle delivery service this year that will allow customers to place orders online and have their groceries delivered by a driverless car.

The pilot program is being launched in Austin, Texas; Miami, Florida: and Washington D.C.

It’s a partnership between the $560-billion mega-retailer and Ford, which will provide Ford Escape hybrids outfitted with Argo AI technology to make the deliveries.

Argo AI, a co-venture between Ford and Volkswagen, will provide the cloud-based infrastructure to schedule drop-offs and safely route  orders.

Initial integration testing is expected to begin later this year, the companies said, and the service initially will be limited to specific areas in each city before being expanded over time.

‘This collaboration will further our mission to get products to the homes of our customers with unparalleled speed and ease, and in turn, will continue to pave the way for autonomous delivery.’

The pilot project illustrates how much both Walmart and Ford are investing in autonomous vehicle technology. 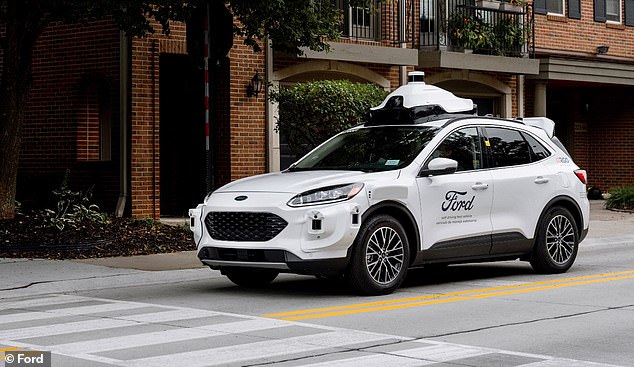 Ford Escape hybrids outfitted with Argo AI technology will make door-to-door deliveries for Walmart in Austin, Miami, and Washington, DC. The delivery area will be limited in each city at first before expanding in time

Argo AI and Ford previous disclosed plans to roll out at least 1,000 self-driving vehicles on Lyft’s ride-hailing network over the next half-decade, starting with Miami and Austin.

Walmart has invested heavily in autonomous delivery since the pandemic, taking advantage of the rising interest in curbside service.

‘We’re basically focused on what technologies are emerging, what things are happening in the space that allow you fundamentally to better serve the customer,’ Ward told Forbes in August. ‘To think about what busy families need and connect it to our overall mission. It’s about speed, about convenience, and obviously about great prices.’

In addition to Ford, Walmart has forged partnerships with other autonomous vehicle startups including Udelv, Gatik, Google’s Waymo and Nuro, the first company approved for driverless deliveries in the state of California.

In November 2020, Walmart announced it was teaming up with Cruise, GM’s autonomous vehicle startup, for a pilot delivery program that uses self-driving cars to bring orders from stores to homes in the Scottsdale, Arizona, area. 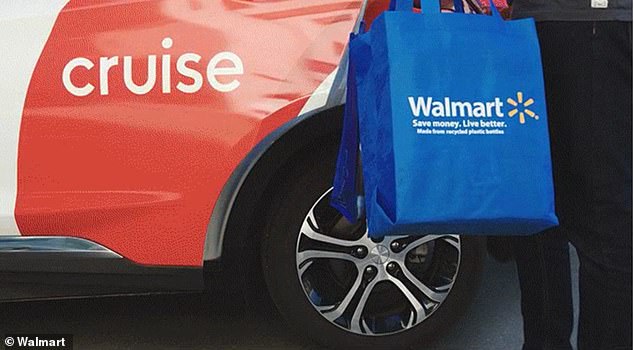 Walmart is teaming up with autonomous vehicle startup Cruise for a pilot delivery program that uses self-driving cars to bring orders from stores to homes around Scottsdale, Arizona

‘You’ve seen us test drive with self-driving cars in the past, and we’re continuing to learn a lot about how they can shape the future of retail,’ Ward said at the time. ‘We’re excited to add Cruise to our lineup of autonomous vehicle pilots as we continue to chart a whole new roadmap for retail.’

Customers will place an order from their local Walmart and it will be delivered, contact-free, by one of Cruise’s all-electric self-driving Chevy Bolts.

Cruise has been testing its self-driving vehicles for automated grocery drop-off for several years in San Francisco, as well as a rides-hare program in Phoenix.

The Walmart delivery program was set to start early this year but it’s not clear if it has begun yet.

Walmart did not immediately respond to a request for comment from DailyMail.com.