EXPRESS INFORMER > Sports > Wallabies legend Bernard Foley on where Australian rugby union got is so wrong, what NRL do better

Wallabies and Waratahs legend Bernard Foley doesn’t just like rugby union, he LOVES it – but that doesn’t stop the star flyhalf from sharing his honest thoughts on the state of the game.

In an exclusive interview with Daily Mail Australia, Foley’s passion for the game oozed out of every pore in his body; but even the self-confessed rugby lover knows there is still work to be done.

Foley is adamant that despite the recent improvements when it came to high performance, fan engagement and grassroots participation, much more can be done to improve the game in Australia.

He might not be a rugby league fan, but Foley did admit that there is one thing in particular league does better than union, after watching one of the greatest league games in recent memory.

‘The physicality was incredible, it was a great advertisement for the game,’ he said of the State of Origin decider on July 13.

‘What rugby league do really well, is they sell it really well. It can be a s**t game, but they just talk it up to the fans of how good the defence is, when really the attack is just horrendous.

‘Whereas rugby is the opposite. Commentators will say ‘oh their skills aren’t good enough’. We need to sell it the other way and say how high-pressure the defence is, for example,’ Foley said. 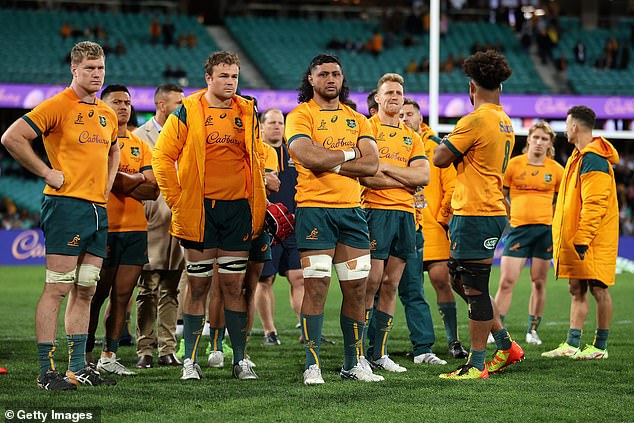 Foley is an unabashed fan of the game, regardless of what kind of state it is in – that’s clear.

And it isn’t just about what happens on the field, it’s what it means for so many different types of people.

‘I’ve been very lucky with the game. It has given me a lot, so there is an aspect of trying to give back (by creating Aqua Rugby), but also I just believe in the game of rugby,’ said Foley.

‘It is so inclusive and the diversity is incredible – anyone can play rugby: people of all shapes and sizes, women and those in the LGBTQI+ community, for example.’ 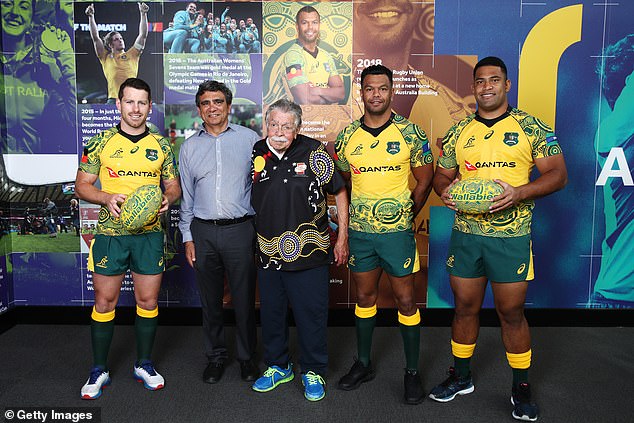 Despite the best efforts of Israel Folau, rugby has been a thoroughly inclusive game for a long time, as Tom Burgess indicated recently when talking about the Bingham Cup, which is colloquially known as the Gay Rugby World Cup.

Foley believes that the more inclusive approach just HAS to continue.

‘That’s where rugby has got it so wrong for so long, targeting such a narrow market. We (aqua rugby) want to solidify that it is a game for everyone,’ he said.

A former Eastwood junior, and proud Sydney University player in the Shute Shield, Foley was only able to play a few games for the Students given his huge schedule for the Waratahs and Wallabies.

That being said, avid Uni fans will never be able to forget the day he led them to a famous preliminary final win over Manly with one of his trademark after-the-siren clutch kicks. 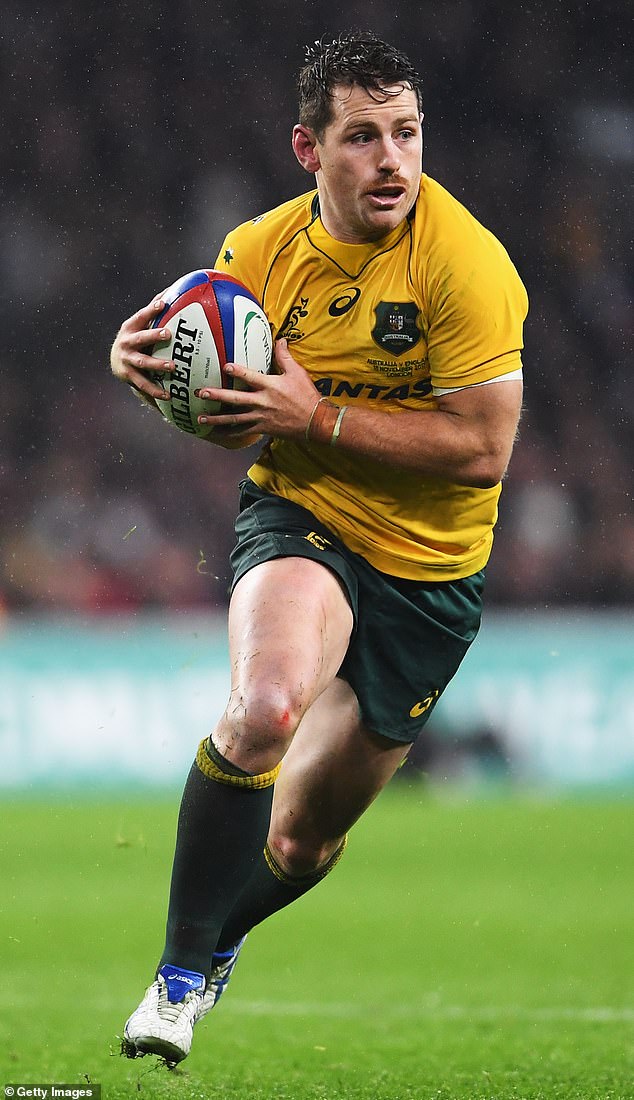 Foley believes even though the absolute top players in Australian rugby might not be able to play many club games, far more needs to be done to promote the premier level below Super Rugby.

Union has long been seen as the ‘private school game’, and Rugby Australia have gotten themselves into many regrettable knots over the last decade or two when it comes to grassroots footy – and for Foley enough is enough.

‘The thing about rugby now is the schedule is so convoluted. It’s a global game, so we don’t have that dimension of guys going back to club footy and giving back – they just can’t because there is so much footy is being played.

‘That’s why rugby has to now start prioritising the local game, be it kids or grade,’ said Foley. 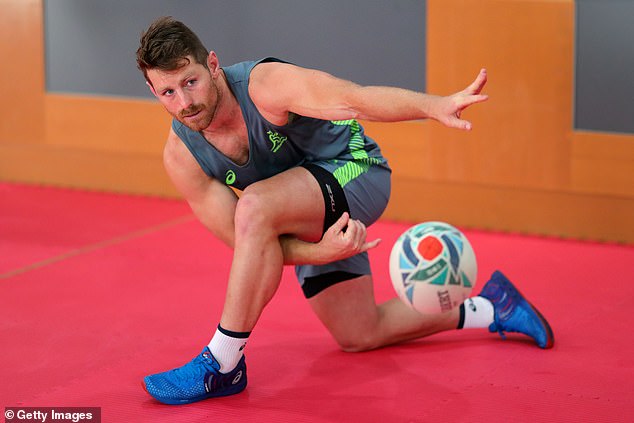 Despite still playing professionally in Japan, Foley, alongside former Waratahs and Wallabies teammate Drew Mitchell, is doing his best to improve the standing of the game here in Australia.

Foley is the co-founder of the epic upcoming Aqua Rugby tournament, where players take part in full-contact rugby on a floating pontoon moored just outside the Manly ferry terminal.

Billed as the Hong Kong Sevens meets the Monaco GP, the three-day tournament features both professional and amateur teams playing off on the floating pontoon, as well as a range of initiatives on-shore to get youngsters more excited about rugby union.

Players can be tackled off the side of the field into the water, full-on contact is encouraged and tries can only be scored by diving off the end of the floating pitch. 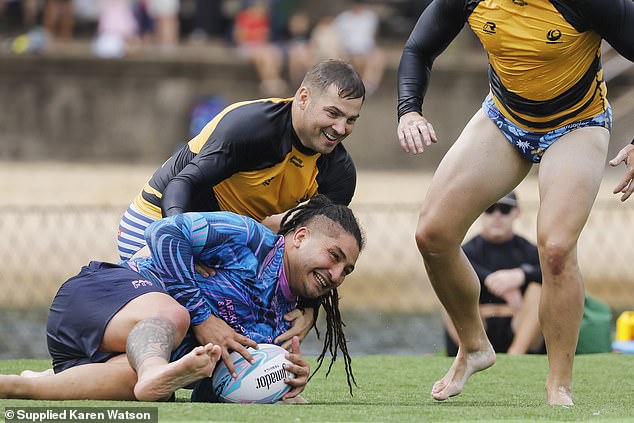 How does one think of such a unique concept?

Well at the pub, of course!

‘The idea came about at a pub over a few beers, where all good ideas come from,’ Foley laughed.

‘We were actually talking about a concept over in France (called Water Rugby), but it was more touch rugby; and it gave us the inspiration while we were sitting around in a pub during 2016, when union wasn’t going great.

‘We were thinking about what event we could do that is the best way to showcase rugby, and get people interested in it again; whether that be general sports lovers or current rugby lovers,’ said Foley.

This isn’t a hit and giggle, a la Andrew Johns playing in for NSW in a Big Bash T20 game in 2007, no – Aqua Rugby is for sheep stations. 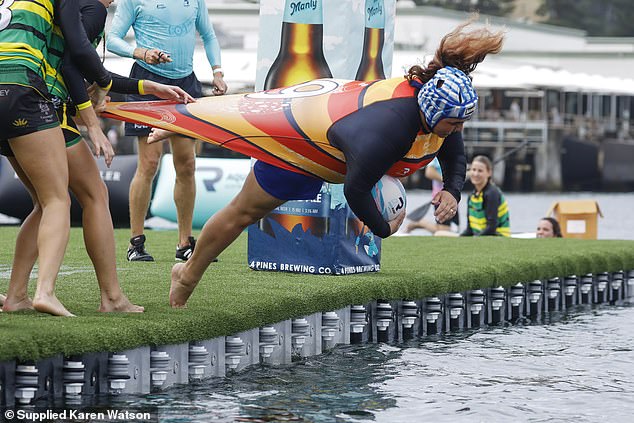 Players pull back an opponent from scoring a try in last year’s Aqua Rugby tournament. Players must dive into the water at the end of the field to score a try

‘Our chairman pushed the fact that we had to be competing for something, otherwise it won’t be taken seriously,’ Foley said at the official launch earlier this month.

‘During the first tournament the first play, there was a massive hit and first try was one of the women doing a huge somersault into the water and we thought, we have something here!

‘A lot of people said it wasn’t going to work, because it was only a vision or a concept; but we are playing for keeps,’ said Foley.

Aside from the hundreds who flocked to the yachts and boats surrounding the floating pontoon and those watching from the beach; 228,000 people tuned in live. 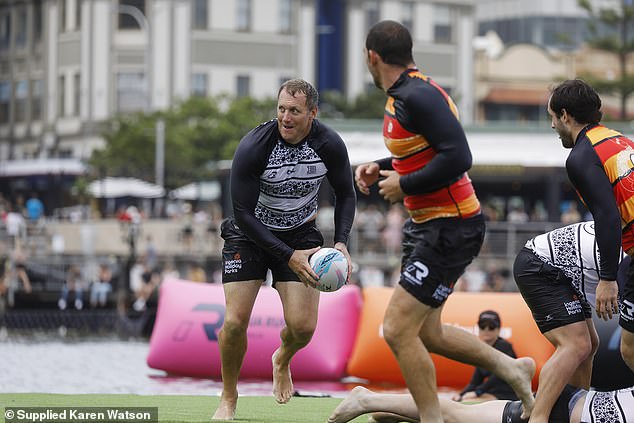 It was a sensational result given the concept was foreign to many, and the event held in the midst of a global pandemic and poor weather conditions.

A number of superstars like Mitchell, Mark Gasnier and Saia Fainga’a took part in the tournament last year – but Foley has pledged to play alongside a whole host of other union current and former legends.

Ambassador Ma’a Nonu, one of the great All Blacks players of all-time, will also be front and centre throughout; and will no doubt be tough to tackle off the pontoon.

This year’s edition promises to be even bigger and better – and you won’t want to miss all the superstars in action from November 10 – 12.