Instead of moving to the top of the Rugby Championship ladder, the Wallabies were brutalised 24-8 by the Springboks in a spiteful clash that was marred by an all-in brawl at the newly re-built Allianz Stadium in Sydney on Saturday night.

Coming off a strong win over South Africa in Adelaide last weekend, the Wallabies could not capitalise on a raucous home crowd and were thoroughly outplayed by a brutally impressive Springboks side.

The Wallabies were smashed in the collision from the outset and are still yet to win back-to-back games this season – much to the chagrin of skipper James Slipper, who clearly took it to heart.

‘It just felt like we didn’t play much rugby. We didn’t really fire a shot,’ he said after the game.

‘We knew what sort of game it would be in these conditions, a big set piece, big kicking game. They were just dropping bombs on us all night and we just got stuck down our end.

‘We really wanted to build a bit of momentum. That’s probably why I’m so gutted right now. Lost a game for our country,’ said a gutted Slipper.

The Springboks scored twice either side of the half but it was Moodie’s first Test try that stole the show, soaring above Koroibete to pluck a towering Jaden Hendrikse box kick and race away to score. 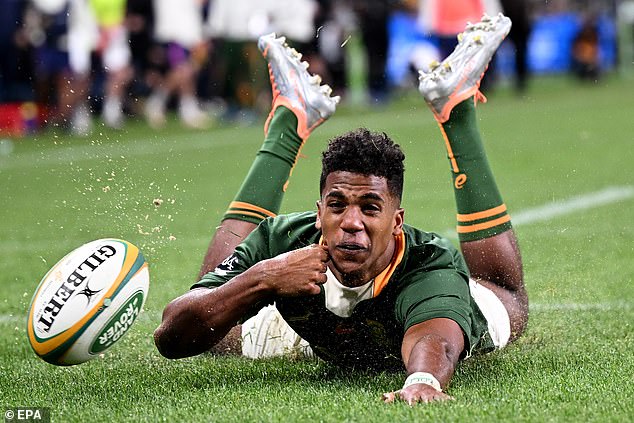 Mapimpi capped the win on 72 minutes finishing a fine Springboks movement from 30 metre out, but was sin-binned after he grabbing at Korobete’s throat – which sparked an all-in brawl.

There appeared to be a degree of revenge after the Wallaby winger smashed him over the sideline with a monster hit as he attempted to score in the Adelaide Test.

Eben Etzebeth got a case of the crazy eyes and was lucky to avoid getting a yellow card himself after a heated confrontation during the brawl with Wallabies prop Allan Alaalatoa. 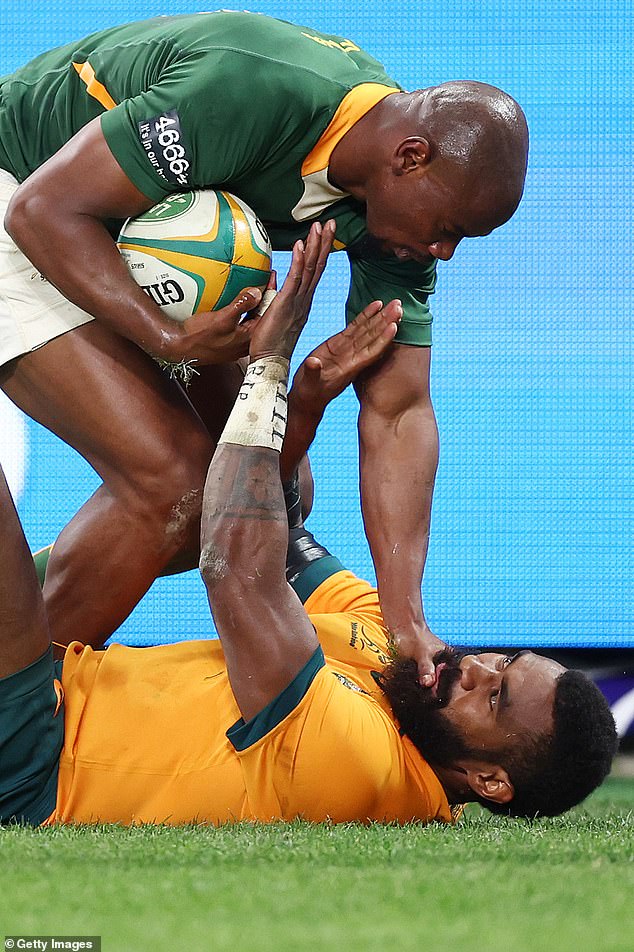 It was one of many skirmishes on the night, and Springboks captain Siya Kolisi said it wasn’t the way he wanted his side to be approaching the game.

‘It’s a bit disappointing and we definitely don’t want to encourage that kind of behaviour. We have millions of kinds around the world watching us,’ he said in a press conference after the game.

‘It happens now and then and I thought it was handled well by the referee.’ 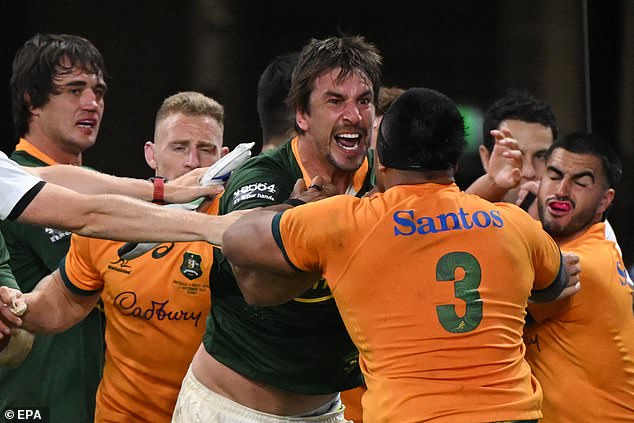 Eben Etzebeth (centre, green jersey) was fired up during an all-in brawl

Having orchestrated South Africa’s first win in Australia in nine years, coach Jacques Nienaber said the performance was a huge step up from the Adelaide defeat.

‘Obviously last week we created a couple of opportunities and I thought we didn’t take those,’ he told reporters after the win.

‘That was better tonight and obviously we weren’t happy with the intensity we started the game with last week, especially those first 20 to 25 minutes … that was a big step up today.’

His Wallabies counterpart was certainly not as pleased after Australia’s forward pack got bullied on several occasions. 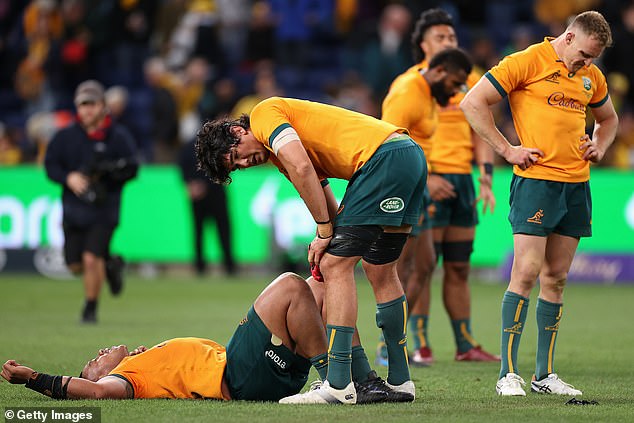 The maddening inconsistency of the Wallabies over the past year was something Dave Rennie said just had to improve.

‘I don’t know about one (step) forward, two (steps) back … it’s a tough competition, you’ve got to be at your best every week to be in with a sniff,’ he said after the game.

‘Clearly that’s been a big part of our mantra, we have an understanding we’re playing for something bigger than ourselves and there’s no shortage of motivation and certainly no shortage of belief.

‘We’ve got to win those key moments and we’ve got to do the basics a hell of a lot better.’ 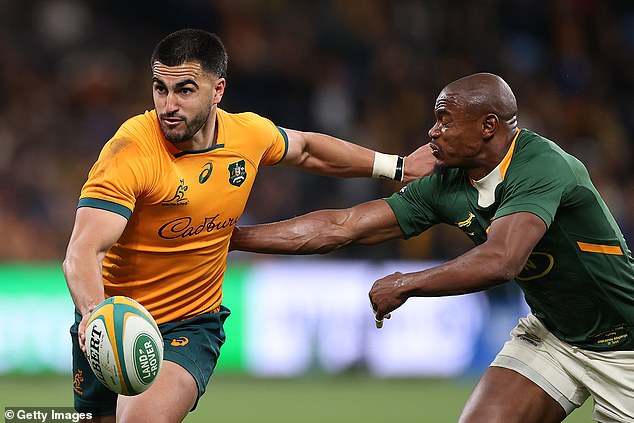 Slipper wasn’t having any excuses however, and the ‘hurt’ Wallabies skipper said he gathered the side together on the field after the match to ensure everyone understood just how disappointing the loss was – and use it as motivation.

‘I just wanted the boys to realise how much it hurts and hold on to that really and let that drive you into the future,’ he said after the game.

‘This one has to hurt a lot, I want the boys to hurt because, yes, South Africa were good, but I just felt like we didn’t really play much rugby at all.

‘Them winning the collision really hurts me,’ said Slipper. 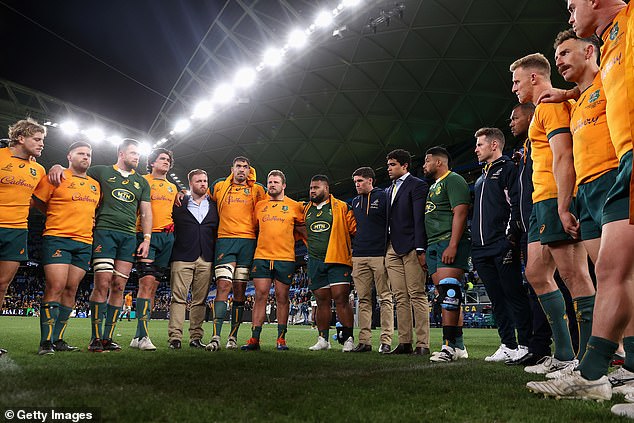 Many rugby fans were scathing not just of the Wallabies performance, but the stop-start nature of the game which saw a penalty blown almost every three minutes by referee Ben O’Keeffe.

‘A game like this turns Wallabiesfans away from the sport – let alone casual viewers. Stoppages every 20 seconds. Constant kicking a ref who can’t let the game flow,’ wrote one fan on Twitter.

One prominent journalist said the Springboks ‘battered (the) Wallabies into submission’, while another simply wrote Australia’s performance was ‘woeful’.

Let me state for the record that the Wallabies have been absolutely outplayed once again tonight, as they generally have been under Rennie. I’m not blaming O’Keefe for the loss. But he is an absolute clown, there’s no discussion.

I literally turned the game off cause of the refereeing…. Union wonders why everyone turns it off, cause of knobs like him with a whistle

This match has been brutal…Wallabies under Rennie have become the most cynical, unlikeable team. Niggly, whinging mob. But they are tough. World rugby is better with a good Wallabies team. #AUSvsRSA

Woeful. Worst performance from the Wallabies under Dave Rennie. Worse than the record defeat to Argentina last month.

All four completed two-game Rugby Championship series to date have ended 1-1, despite being played in one country rather than home and away; in what has quickly become a topsy-turvy tournament.

The Wallabies will now head into their two-Test Bledisloe Cup series with all four sides on 2-2 records.

They’ll need to break their 20-year Bledisloe Cup drought to win the title, but Slipper implored his teammates to come back to work determined to make history. 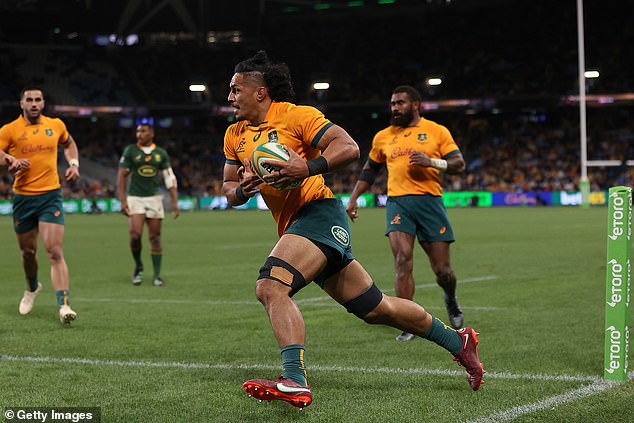 ‘It doesn’t get any easier. We’re going into the Bledisloe now, it’s going to be two tough games coming up. We’ll pick ourselves up. We’ve got a good group here and we’ll rip in,’ said a determined Slipper.

Australia will host New Zealand at Marvel Stadium in Melbourne for the first game on September 15, before heading across the ditch to take on the Kiwis at Eden Park on September 24.