Waking up early and staying consistently active throughout the day can improve a person’s cognition and make them happier, a new study finds.

Researchers at the University of Pittsburgh Medical Center (UPMC) found that elderly adults who woke up before 7 a.m. and got consistent, regular, physical activity each day scored better on cognitive tests and reported lower rates of depression.

Interestingly, the study found that length of time exercising mattered more to brain health than intensity. Participants who went through intensive exercise for a half-hour to hour each day saw little benefit compared to those who performed light activity like walking during a large portion of their waking hours.

While exercise has long been tied to better cognitive function, the study finds that exercising consistently and living on a more regular schedule could be the most important factor of all when it comes to maintaining cognitive health in older age.

Researchers, who published their findings Tuesday in JAMA Psychiatry, gathered data from 1,800 people over the age of 65 for the study.

Each was equipped with a an accelerometers, a device that could detect movement and exercise – for seven days to track their daily activity.

Participants also completed surveys on their daily mood and had their wake time each morning recorded as well.

They found that 37 percent of participants rose early in the morning – at 7 a.m. or earlier – and stayed relatively active throughout the day. This group also had consistent daily routines.

This group tested the best on cognitive exams and was also the least likely to report depressive symptoms when surveyed.

‘Many older adults had robust patterns: They get up before 7 a.m. on average, and they keep going; they stay active for 15 hours or so each day. They also tend to follow the same pattern day in, day out,’  Dr Stephen Smagula, an assistant psychiatry professor at UPMC, said in a statement.

‘Lo and behold, those same adults were happier, less depressed and had better cognitive function than other participants.’

A third of participants had consistent daily routines, but either woke up later in the day or went to sleep earlier.

As a result, they did not score as well as the previous group on cognitive tests and reported slightly increased risks of depression.

This is an interesting finding for researchers, as it shows that more consistent activity throughout the day may be more valuable than intense exercise every day.

‘People often think about activity intensity being important for health, but it might be the duration of activity that matters more,’ Smagula explained.

‘This is a different way of thinking about activity: You may not need to be sprinting or running a marathon but simply staying engaged with activities throughout the day.’

The worst-off group was the remaining 30 percent that had inconsistent daily patterns and erratic physical activity throughout the day. 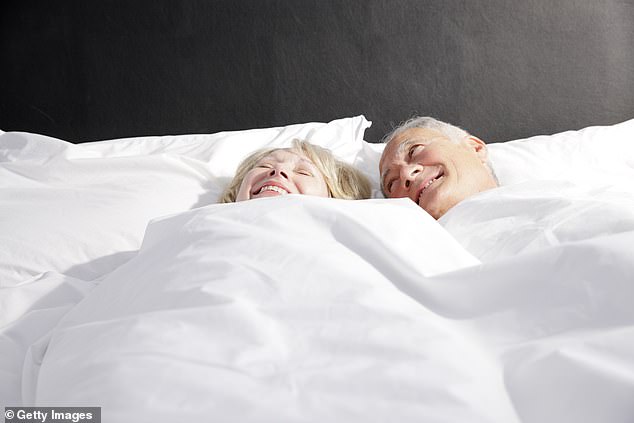 Having a consistent daily schedule where one wakes up before 7 a.m. is crucial to cognitive health in older age, researchers found (file photo)

This group was the worst off, scoring poorly on cognitive tests while almost being most likely to report depressive symptoms.

‘Our findings suggest that activity pattern disruption is very common and associated with health problems in older adults,’ Smagula continued.

‘The relationship is likely bi-directional, so the good news is we think that simple changes — things everyone can try — can restore regular activity patterns and doing so may improve health.’

He said that the most important factor for potentially reversing the effects that a poor routine or inconsistent schedule can have is to develop a daily plan to stay active performing fun activities.

‘Most people are aware of the importance of good sleep and exercise, but I think what’s missing from this picture is the daily, or circadian, pattern of activity,’ said Smagula.

‘Having something to wake up for each morning and having a full day that you find purposeful and rewarding might be what’s important for us sleeping well at night and aging well.’