A tiny Australian resort town is bracing for an influx of thousands of stargazers within months three years after a phone call out of the blue from the US hinted at a rare phenomenon heading their way.

Exmouth on the tip of Western Australia’s North West Cape will be the best place in the world to view this year’s total solar eclipse.

At 11.27am on April 20, the path of totality will graze the tip of Western Australia in a 40kilometre-wide track near Exmouth and become the most accessible land-based place on Earth to view the 62-second spectacle.

Home to 2,806 residents, the Shire of Exmouth estimates up to 50,000 visitors could descend on the region, including surrounding coastal towns 300km away.

Local business owner Steve Riley admits the town still isn’t ready, despite a woman from the US giving a caravan park operator the head-ups in 2020.

‘He had call from a chick in America who said, “I want to hire out your whole caravan park for a week, what’s your number? Gimme a price”,’ Mr Riley told Daily Mail Australia.

‘At the time no one had no idea and didn’t take any notice because people come to Exmouth all the time. It’s a tourist town and we do it well.’

Mr Riley finally realised how big the phenomenon would be a year ago when he took part in a question and answer session over Zoom with Tourism Western Australia and international tour operators.

The solar phenomenon will occur in the middle of April school holidays and the town’s whale shark swimming season.

It comes just months after the Exmouth’s population swelled by a record 20,000 during the July school holidays last year after the state’s borders reopened.

‘It’s the biggest event Exmouth has ever had, so it’s going to be crazy,’ Mr Riley said.

‘We’ve just got to roll the dice and see what happens. It’s all about pre-planning.’ 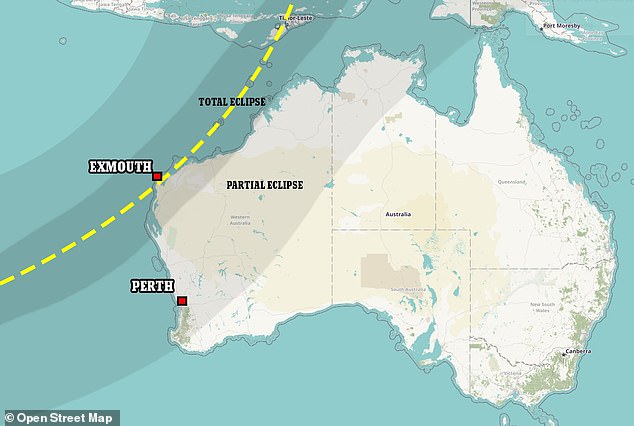 A solar eclipse happens when the moon casts a shadow on the earth as it passes between the earth and the sun. At least twice a year, the orbits of the moon and Earth block the sun to cause a shadow on Earth.

Most eclipses are partial, but when the moon is in close to the earth, it results in a total eclipse.

Mr Riley’s fishing and tackle business – which also hires out and sets up camping sites – has been flooded with inquiries from around the globe.

‘We got bookings for a group of 10 astronomers from Chile, a reporter from New York, along with groups coming from Japan and across Europe,’ he said.

He admits pre-planning for the event and dealing with government agencies hasn’t been smooth sailing and the town is still playing catch up post-Covid-19.

‘The council had to build two huge water tanks, otherwise the the town would have run out of water,’ Mr Riley said.

‘There will be trucks doing extra garbage and waste collection services throughout the week.’

‘Food and drink businesses are bringing in extra containers and fridge trucks for storage.’

‘There’s talk going around that once the town hits full capacity, the highway will be blocked off and only those with accommodation will be allowed in.’

The Western Australian government has spent the last two years and poured $21million into turning the world heritage-listed Ningaloo Marine Park into a viewing spot and campsite for visitors. 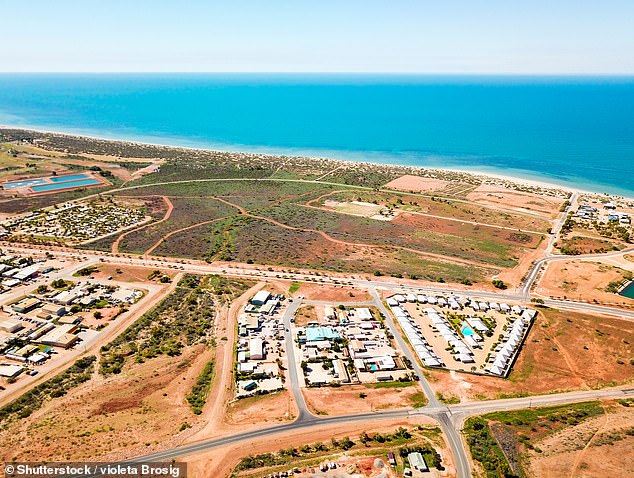 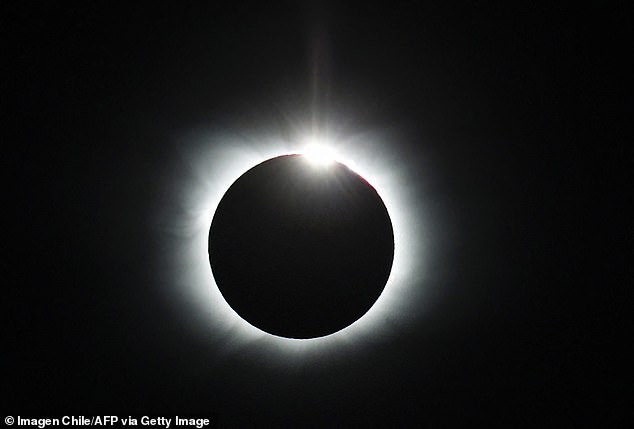 Local businesses started receiving inquiries about the rare phenomenon threes years ago (pictured, the total solar eclipse from Union Glacier in Antarctica in 2021)

A three-day ‘Dark Sky Festival’ in Exmouth will include stargazing, science and astronomy activities, music, and ‘unique dining opportunities’.

‘Observers can expect to see the Sun’s bright disc slowly being covered by the silhouette of the Moon to produce a diminishing solar crescent,’ Gravity Discovery Centre astronomer Rick Tonello said.

Qantas still has seats on flights to Exmouth in the week leading up to the solar eclipse while Mr Riley assured there are still accommodation vacancies in town, despite being heavily booked out.

‘If you’re coming, book your accommodation now,’ he said.

‘Once you have somewhere to stay, the rest is easy.’

For stargazers who miss out or can’t make it to Exmouth, Coral Bay will experience a 99 per cent partial eclipse while, further south, Geraldton and Perth will see an 80 and 70 per cent eclipse respectively. 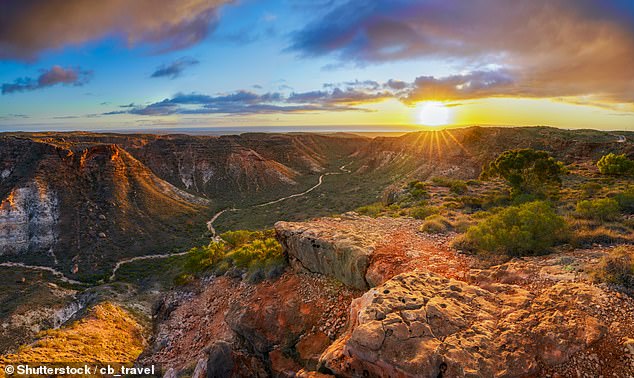