A man who videoed a woman naked while she slept in a five-star hotel was today ordered to pay her £5,000 in compensation following a five-year legal battle.

Emily Hunt, 41, woke up at the Town Hall Hotel in East London with no previous memory of the night before next to stranger Christopher Killick in May 2015.

Killick, also 41, was first arrested on suspicion of rape over the incident in Bethnal Green, but released him due to lack of evidence.

But due to Ms Hunt’s persistence, the Crown Prosecution Service was forced to make a U-turn and charge him with voyeurism.

Today at Stratford Magistrates’ Court, Killick avoided jail but was told to pay her £5,000 in addition to receiving a £2,180 fine and costs order. He was also given a restraining order.

In a statement after the sentencing, Ms Hunt said it was ‘appaling’ that her battle for justice had lasted five years, adding: ‘I am very pleased with the sentence passed by the court today and the powerful comments made by the judge. 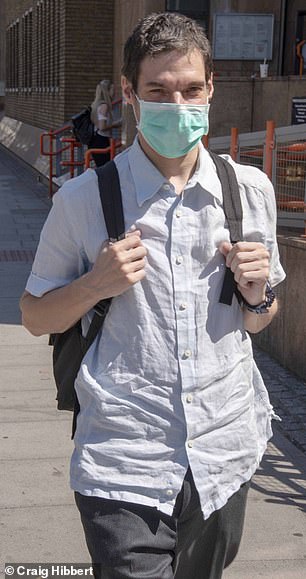 Emily Hunt (left, on August 7), 41, woke up in a hotel with no previous memory of the night before next to stranger Christopher Killick (right, at Thames Magistrates Court on August 7)

‘The recognition that this was a serious sexual offence, and the acknowledgement of the devastating impact it has had on my life, is the most important thing to me.

‘It is appalling that it has taken five years of fighting to get to this point. I hope that in future no other victim of a sexual offence has to go through what I have experienced.

‘I want to thank everyone who has supported me up to this point. This would not have happened without you.’

‘You knew it was morally wrong and deceitful’: Judge’s comments in full as she blasts ‘shocking’ crime

District Judge Louisa Cieciora said: ‘The facts are shocking. As you said to the probation officer, you knew it was morally wrong and deceitful to record Ms Hunt without her consent.

‘It was invasive and taken without the victim’s knowledge or awareness. You prioritised your own desires without thinking of the victim.

‘Ms Hunt has concerns it will be seen as trivial and easily dismissed. It is anything but. It had a devastating impact on her.

‘Throughout all legal proceedings, you have accepted your wrongdoing and pleaded guilty at the earliest opportunity.

‘Had you not pleaded guilty at the first opportunity, this would have passed the custody threshold.

‘Considering the next stage up is custody, if you fail to pay any element of the fine or compensation, you can be arrested on warrant and serve time in custody.’

How Ms Hunt, then 36, arrived at the £300-a-night Town Hall Hotel on 10 May 2015, used as a filming location in pictures like Snatch and Lock Stock and Two Smoking Barrels, that night remains a mystery.

But she has always maintained that an offence of voyeurism was made out, while the CPS contended that she could have ‘no reasonable expectation of privacy’ from the alleged illicit filming.

Although voyeurism is a crime under the Sexual Offences Act 2003, the CPS stated filming someone naked in a private room was not an offence if they had consented to being looked at naked.

In January 2020, the CPS withdrew its opposition to Ms Hunt’s claim and made a fresh decision to prosecute Killick following a decisive judgement on the law in a parallel case from the Court of Appeal ruling that non-consensual intimate filming was illegal.

In May 2020, five years after he volunteered the 62 second video to police, Killick was arrested and charged with voyeurism.

Arriving at Stratford Magistrates’ Court in a crumpled light blue shirt, dark trousers and a blue mask slung under his chin, Killick had previously pleaded guilty to the charge.

Prosecutor Varinder Hayre said: ‘Mr Killick admitted while Ms Hunt fell asleep he masturbated right next to her on the bed.

‘He then got up and made a cup of tea while she was sleeping. He had taken a short video of her sleeping and lying naked.

Ms Hayre said the victim only remembered going for lunch and drinks at a restaurant in Bethnal Green at around 11.30am before he went to the airport.

She said: ‘She remembered waking up naked with only a small decorated throw partially covering her.

‘Mr Killick, who she had never seen before, was next to her on the bed. He was fully clothed, watching television, and laughing. 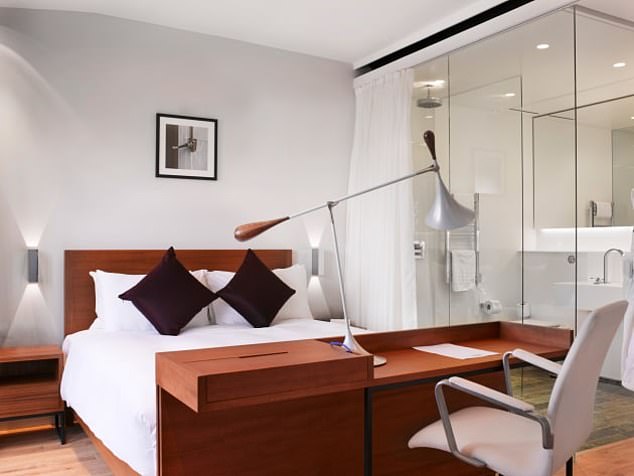 ‘Ms Hunt said she had never seen him before and asked him who he was and where they were. He said he was called Chris and they were at the Town Hall hotel in Tower Hamlets.

The prosecutor added: ‘Mr Killick was trying to talk to her into not leaving the room. When Ms Hunt walked out of the door, the door was not locked.

‘She was cold and frightened. She had a panic attack when she spoke to the police.

‘Mr Killick was sitting on the bed and didn’t get up or move at all. He stayed there the whole time.

‘Ms Hunt could barely breathe. She did not stop to pick up her tights and retrieve her favourite necklace. She just walked as she wanted to get out.

‘Mr Killick said nothing had happened, but she didn’t know if she believed him as she had woken up naked.

‘She said this guy was so creepy, smiling and acting like everything was OK. 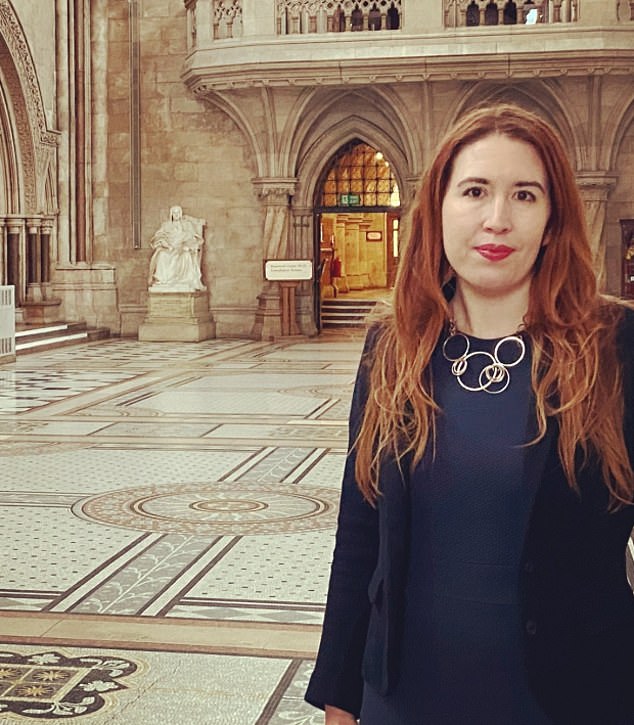 Due to Ms Hunt’s persistence, the CPS made a U-turn and charged Killick with voyeurism

‘Ms Hunt said while she did not have any recollection of any events that had happened the night before, she would not have consented to be photographed or videoed by anyone and certainly not by someone who she had just met.

‘She has never trusted anyone to take a video of her naked body as it makes her uncomfortable that a photo or video of that nature could last forever.’

Ms Hunt, appearing at the court behind a screen to read her victim impact statement, said: ‘This was a video taken an hour after he met me. It feels like a trophy.

‘My world fell apart. I had a hyperventilating panic attack for the first time in my life that day. I had a total breakdown and was diagnosed with post-traumatic stress disorder.

‘PTSD is not a subjective state of mind, it is a serious condition that can be seen by an MRI.

‘Some time later, I went back to that same hotel room and attempted suicide. I am lucky to be here today.’

She added: ‘This is not trivial. I am a deeply private person and I do not share images like that with anyone. It made me mistrustful of anyone.

‘I cannot overstate what this voyeurism has done to my physical and mental health. It’s had a negative impact on my professional and personal life. I’ve missed out on tens of thousands of pounds to make a better life for my daughter,

‘Taking the video of me may be trivial and easily dismissed, this 62 second aberration, but it’s profoundly disturbing and ultimately devastating.

‘What he has done is voyeurism and it has ruined my life.’

Seona White, mitigating, reassured Ms Hunt that Killick’s phone had been seized by police and had not been uploaded online or had been seen by anyone.

She also said when he was taken to Bethnal Green police station shortly after the incident, he admitted to meeting Ms Hunt at a bar before going back to the hotel where sexual activity took place and volunteered the video.

She said: ‘Mr Killick has accepted that it was a spur of the moment he decided to take a video of the complainant.

‘During the police interview, he volunteered that he had taken the video.

She also read out a statement from his mother, Marion Killick, who was present in the courtroom, saying: ‘He is kind and compassionate.

‘He cares for me as I am now elderly and not as mobile as I once was. Christopher told me in 2015 that he had taken the video without permission and he is truly sorry. I believe he is genuinely remorseful.’

Sentencing Killick today, District Judge Louisa Cieciora said had he not pleaded guilty at the earliest possible opportunity he would have been jailed.

She imposed a community order for 30 months, including completing the Horizon programme to develop victim empathy skills and 30 days of rehab activity to perform as directed.

Both amounts are to be paid within three months. He was also handed a restraining order indefinitely where he was banned from contacting Ms Hunt directly or indirectly by any means and was placed on the sex offenders register for five years.

Sitting at Stratford Magistrates Court, Ms Cieciora told him: ‘The facts are shocking. As you said to the probation officer, you knew it was morally wrong and deceitful to record Ms Hunt without her consent.

‘It was invasive and taken without the victim’s knowledge or awareness. You prioritised your own desires without thinking of the victim.

‘Ms Hunt has concerns it will be seen as trivial and easily dismissed. It is anything but. It had a devastating impact on her. Throughout all legal proceedings, you have accepted your wrongdoing and pleaded guilty at the earliest opportunity.’

She added: ‘Had you not pleaded guilty at the first opportunity, this would have passed the custody threshold.

‘Considering the next stage up is custody, if you fail to pay any element of the fine or compensation, you can be arrested on warrant and serve time in custody.’

Ms Hunt, who waived her anonymity, was upset that he had not gone to jail.  Her lawyer said she would not be speaking outside the court today.

Kate Ellis, from the Centre for Women’s Justice, said: ‘She’s emotional. It was very hard for her today for him not to receive a custodial sentence.

‘She’s got some degree of justice. What we heard in court today shows how difficult it is for victims of serious crimes to be given the punishment they deserve.

‘It’s an emotional day for Emily. ‘What we have is vindication for the conviction, but it still is not easy for her to know that this man is still out on the streets.’