She’s currently enjoying a lavish Caribbean holiday with her husband Spencer Matthews and their three children.

And Vogue Williams showed off her incredible figure as she paddle boarded in the Saint Barthélemy sea on Thursday.

The model, 37,  donned a skimpy red bikini for the outing as son Theodore, four, and two-year-old daughter Gigi sat on the board.

Holiday: Vogue Williams, 37, showed off her incredible figure in a red bikini as she paddle-boarded with two of her children during her family holiday in the Caribbean on Thursday

The two-piece featured a bandeau top as well as drawstring bottoms which accentuated Vogue’s hourglass figure.

The stunner shielded herself from the scorching sun beneath a white fedora as well a pair of oversized shades.

Vogue worked on her core as she stood upright on the board and paddled her brood into shore. 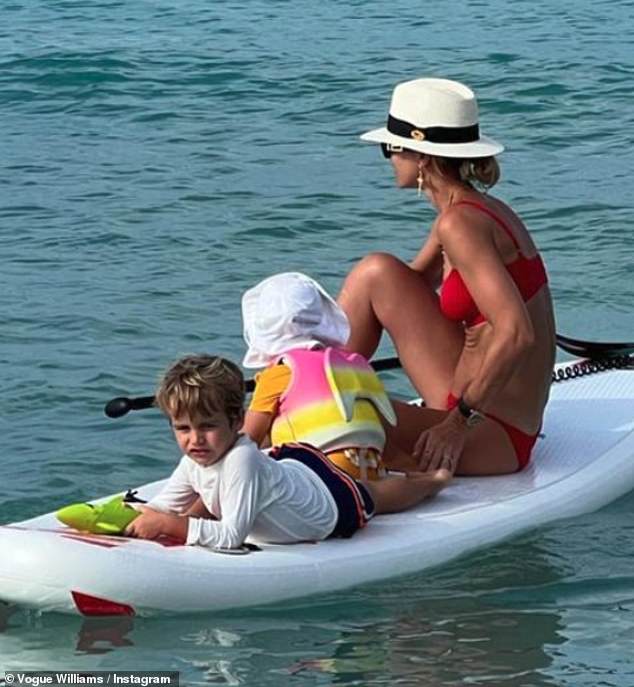 Family time: The model, 37, donned a skimpy red bikini for the outing as son Theodore, four, and two-year-old daughter Gigi sat on the board 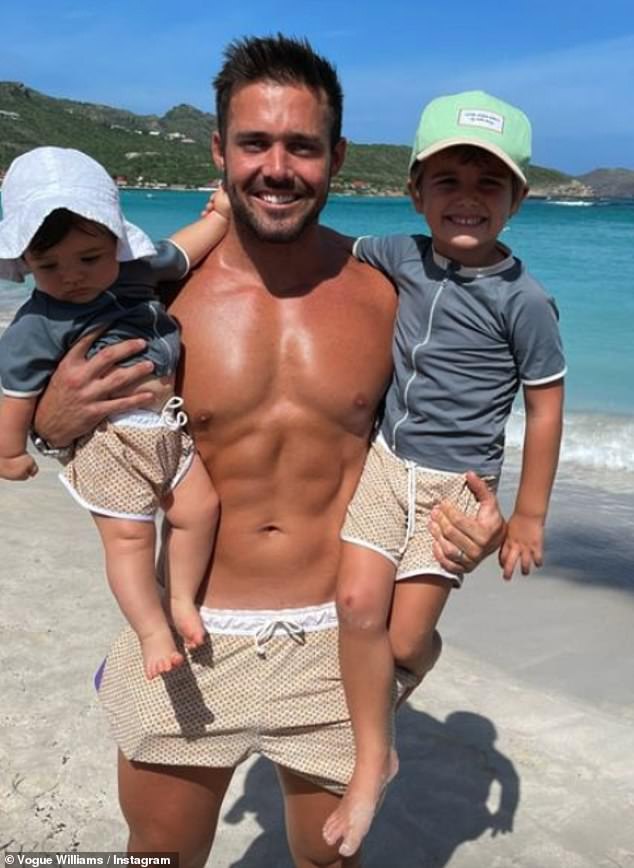 Hunky: She also shared a snap of Spencer who flaunted his washboard abs in orange printed swimming shorts (pictured with sons Otto and Theodore)

It comes after hubby Spencer recently filmed a documentary about his late brother Michael’s last days before he died descending Mount Everest.

And, reflecting on his sibling’s passing, the former reality star has revealed he ‘never really processed’ his death until ‘just now’, adding that he assumed the ‘superhero’ would return.

Spencer was 10-years-old when Michael tragically died aged 22 – after becoming the youngest Brit to reach the peak in 1999. 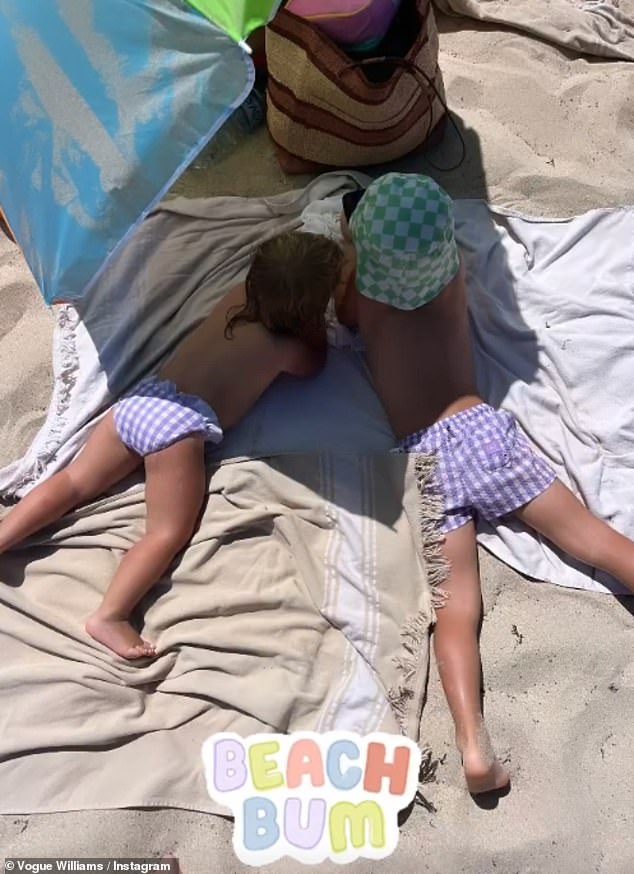 Cuties: She also shared a sweet snap as her children cooled off under an umbrella 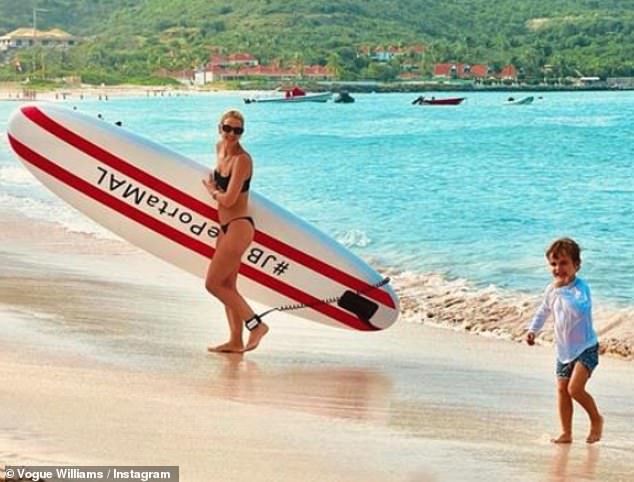 New hobby: Paddle boarding appears to be a new hobby for the family after Vogue shared a snap of them also enjoying it on Wednesday (pictured) 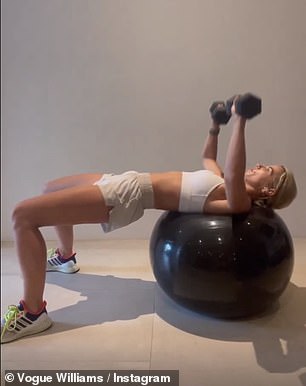 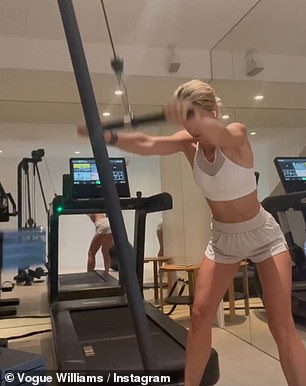 Workout: She later took to the gym in her swanky hotel for a workout

Speaking on his new podcast, Big Fish, released on Wednesday, he told Ant Middleton: ‘I never really processed Mike’s death until just now. He died in 1999, you know, 23 years ago. And he was 22, the youngest Brit to reach the summit. And I was 10.

‘So, to me, losing him was not something I fully understood. Mike was my superhero figure in my life. I just assumed he’d come back, I didn’t believe that he was dead for a period of time.

‘And you know, as time passed, I understood I would never see him again. I’ve always had this burning desire to find him. And obviously I understood through my teenage years, how complicated that would be. 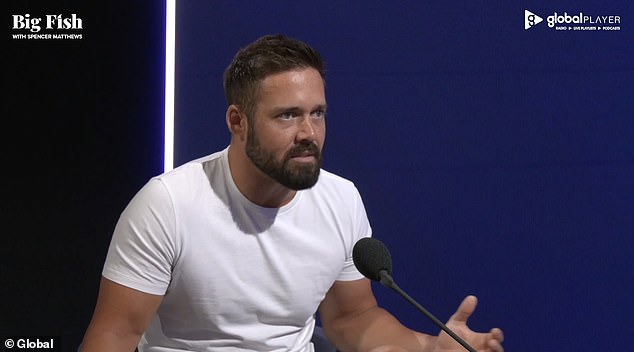 Sad: It comes after hubby Spencer recently filmed a documentary about his late brother Michael’s last days before he died descending Mount Everest

‘I’m not a particularly externally emotional person. I can’t really remember the last time I cried. I’m a very black and white character who just deals with issues when I face them.

‘I became very close with people on that mountain and they came home, you know, one of the lads lost 20 kilos because he was there the whole time, and he was different, you know, he came back and was affected by it.’

Spencer – who shares children Theodore, four, Gigi, two, and Otto, six months, with his wife Vogue Williams – continued: ‘Otto was five days old when I left for Everest for five weeks. I had nothing but support from Vogue. Vogue was so on board with it and so proud that we were doing it.

‘And she feels really close to Michael having never met him, of course, and was deeply emotionally touched by the whole thing.’ 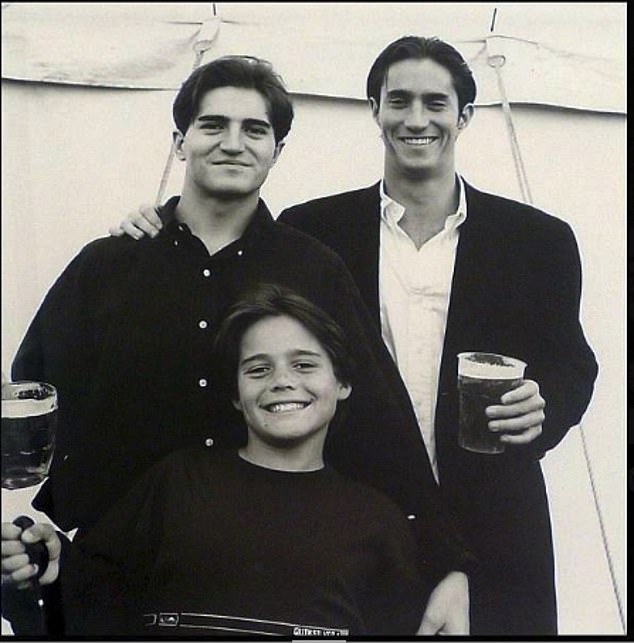 Family: The former Made In Chelsea star was 10-years-old when Michael (left next to sibling James) tragically died aged 22 – after becoming the youngest Brit to reach the peak in 1999