Vladimir Putin has called on G20 countries to work together to find a coronavirus vaccine as world leaders held a virtual summit today.

The Russian leader used the video conference to demand a ‘green corridor’ in which key technology could be shared regardless of sanctions such as those on Moscow.

Putin also warned that long-term unemployment was a ‘key risk’ resulting from the current standstill, as G20 leaders vowed to used ‘all available tools’ to reduce the economic blow.

Donald Trump, Xi Jinping and Emmanuel Macron were among the leaders on the conference call today, which was being hosted remotely by the King of Saudi Arabia.

Canadian PM Justin Trudeau appeared on a screen from his home in Ottawa, where he is in quarantine after his wife Sophie Gregoire Trudeau caught the virus.

Angela Merkel is also working from home after being treated by a doctor who has since tested positive, although the chancellor’s own tests have come back negative. 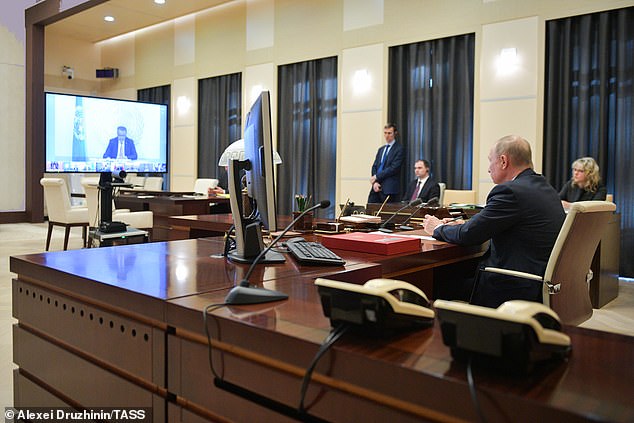 Russian president Vladimir Putin speaks to world leaders during the virtual G20 summit today, during which he urged nations to work together to find a vaccine

A joint statement released by the leaders after the virtual summit called for a ‘transparent, robust, co-ordinated, large-scale and science-based global response’.

‘We are deeply saddened by the tragic loss of life and the suffering faced by people around the world,’ the statement said.

‘Tackling the pandemic and its intertwined health, social and economic impacts is our absolute priority.

‘We express our gratitude and support to all frontline health workers as we continue to fight the pandemic.

‘The G20 is committed to do whatever it takes to overcome the pandemic, along with the World Health Organization, International Monetary Fund, World Bank Group, United Nations, and other international organisations.’

The leaders vowed to ‘share timely and transparent information’ and share materials for research, as scientists around the world scramble to develop a vaccine.

An effective vaccine would hugely reduce the pressure on public health services and allow life to return to normal for the billions under lockdown.

Speaking from Moscow, Vladimir Putin declared that a vaccine would be found more quickly if G20 countries work together.

‘We undoubtedly cannot afford to act on the principle every man for himself,’ the Russian president said.

Russia has been under numerous rounds of Western sanctions following the annexation of Crimea in 2014 and its role in the Ukraine crisis.

Saudi Arabia, which is presiding over the G20 this year, opened the meeting with an urgent appeal by King Salman for the world’s most powerful nations to finance the research and development of a vaccine.

‘This human crisis requires a global response. The world counts on us to come together and cooperate in order to face this challenge,’ the Saudi monarch said. 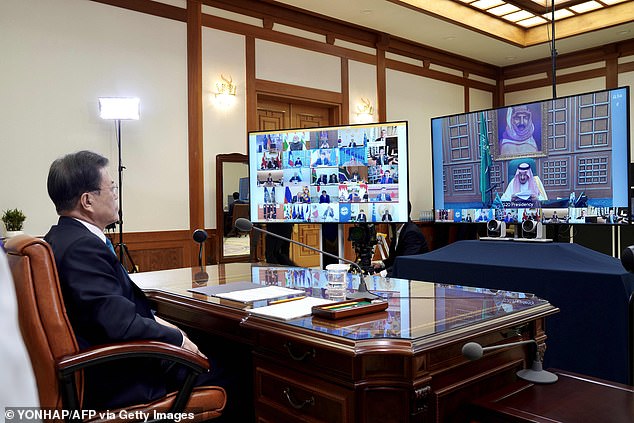 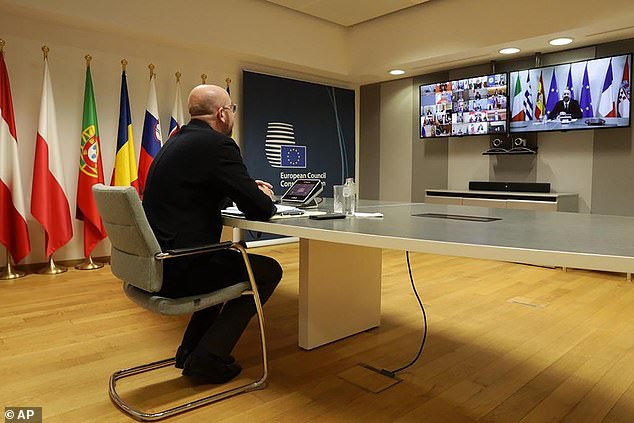 European Council president Charles Michel looks at two screens today during the virtual G20 summit. The EU is one of the 20 members of the wealthy nations’ club 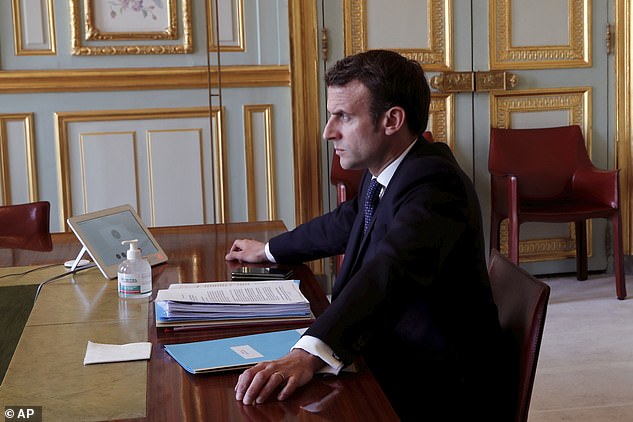 The leaders also pledged to use ‘all available policy tools’ to counter the economic blow from the pandemic, which has brought much of the world economy to a standstill.

The heads of government said they were injecting a combined $5trillion (£4.2trillion) into the global economy.

Governments around the world have made extraordinary financial commitments to ease the economic impact of the crisis.

The G20 statement also voiced fears about what could happen if the virus spread rapidly in developing countries, including in Africa.

Even wealthy countries such as Italy have seen their health systems overwhelmed by the scale of the crisis, forcing doctors into unenviable life-or-death decisions.

‘We are gravely concerned with the serious risks posed to all countries, particularly developing and least developed countries, and notably in Africa,’ the leaders said.

They also highlighted ‘the particular risk faced by refugees and displaced persons’.

‘We consider that consolidating Africa’s health defence is a key for the resilience of global health,’ the joint statement said.

‘We will strengthen capacity building and technical assistance, especially to at-risk communities. We stand ready to mobilise development and humanitarian financing.’

Ethiopia’s government told G20 finance ministers and Central Bank chiefs in a call ahead of Thursday’s summit that Africa needs a $150billion emergency financing package due to the impact of the virus. 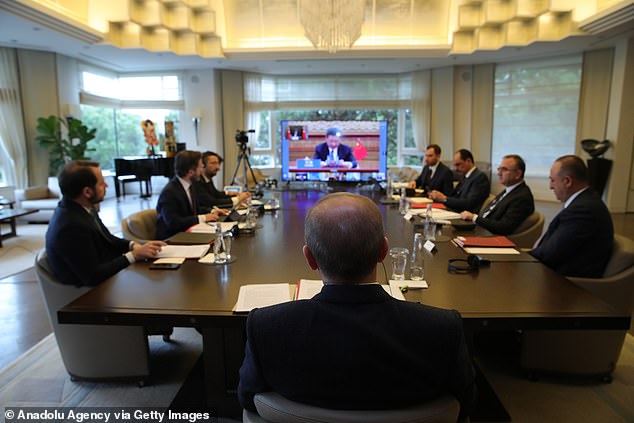 Turkish president Recep Tayyip Erdogan, with his back to the camera, looks down a table at a screen showing his fellow G20 leaders 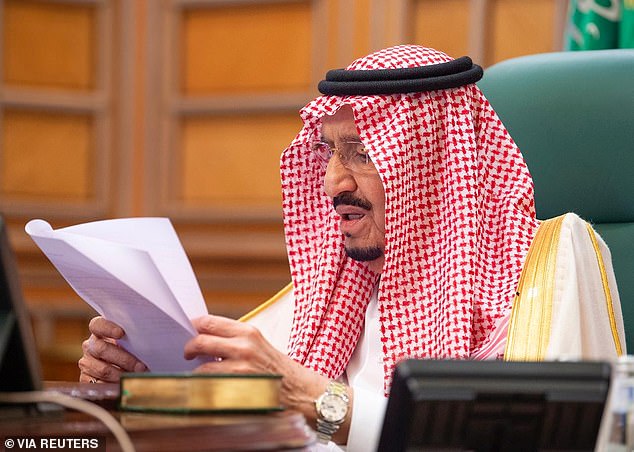 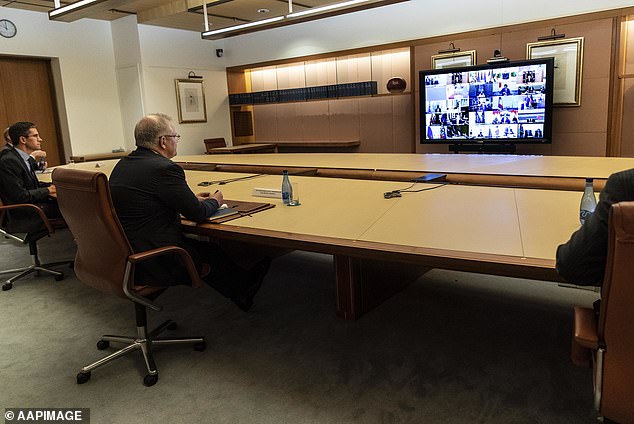 U.N. Secretary-General Antonio Guterres has urged G20 leaders to adopt a ‘wartime’ plan including a stimulus package ‘in the trillions of dollars’ for businesses, workers and households in developing countries trying to tackle the pandemic.

The International Labor Organization says nearly 40 per cent of the world’s population has no health insurance or access to national health services.

It said the current health crisis makes clear that not nearly enough progress has been made by governments in the years since the 2008 financial crisis to expand access to health services, sickness benefits, and unemployment protection.

There was also praise for the International Olympic Committee after it finally gave in and postponed the Tokyo Games until 2021, after organisers had insisted for weeks that the showpiece would happen on schedule.

‘We commend Japan’s determination to host the Olympic and Paralympic Games Tokyo 2020 in their complete form as a symbol of human resilience,’ the leaders said.

Organisers say they will retain the label Tokyo 2020, even though the Games will not be held in this calendar year.

‘We stand ready to react promptly and take any further action that may be required, the statement concluded today.

‘We express our readiness to convene again as the situation requires. Global action, solidarity and international cooperation are more than ever necessary to address this pandemic.

‘We are confident that, working closely together, we will overcome this. We will protect human life, restore global economic stability, and lay out solid foundations for strong, sustainable, balanced and inclusive growth.’

A similar virtual meeting between G7 foreign ministers ended in disagreement this week, as Washington pushed to call out China as the source of the virus.

The foreign ministers were unable to agree on the U.S. push to identify the pathogen as the ‘Wuhan virus’, meaning no joint statement was released after the call.