A Virginia cop who was fired for anonymously donating $25 to a Kyle Rittenhouse defense fund after being outed by hackers and the media is now demanding his job back from the woke, ‘hypocrite’ police chief who fired him.

Speaking to DailyMail.com on Friday, as the Rittenhouse verdict came in on Friday, Norfolk Police Lieutenant William ‘Bill’ Kelly explained why he thought Rittenhouse deserved his help back then, and why he stands by the decision now.

Rittenhouse was found not guilty on all counts on Friday after a two week trial. He buckled in tears as the verdict was read aloud and is now a free man.

Seven months ago, long before the trial had even started, 42-year-old Kelly was fired for donating anonymously to the teenager’s then-growing defense fund.

Kelly, a 19-year veteran and father-of-three who had moved into the internal affairs division at the time, made a $25 donation to a Give Send Go online campaign for Rittenhouse’s legal team after watching social media videos and journalists’ footage from the August 2020 Kenosha riots.

He wrote alongside his donation: ‘God Bless. Thank you for your courage. Keep your head up. You’ve done nothing wrong. Every rank-and-file police officer supports you.’

Speaking to DailyMail.com on Friday, Norfolk Police Lieutenant William ‘Bill’ Kelly explained why he stands by his decision to support Kyle Rittenhouse 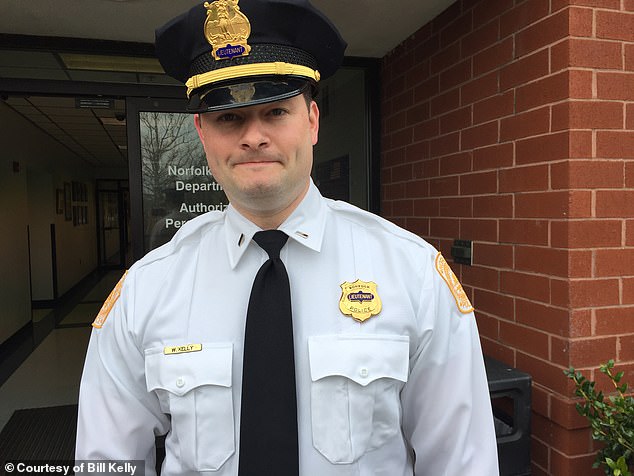 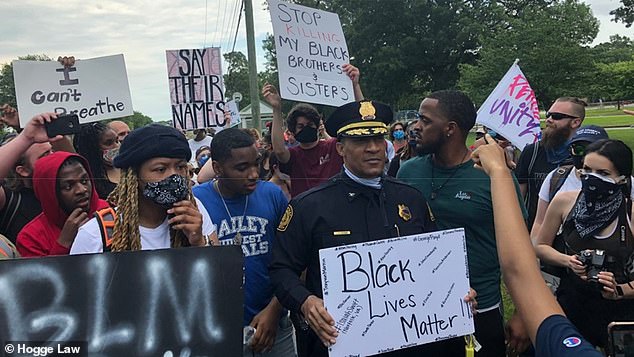 However, the police chief in Norfolk, Larry Boone (center with sign), was not disciplined for parading in uniform at a BLM protest in May 2020

He thought nothing else of it, until his name appeared in an article by The Guardian among the names of other cops who gave to the fund. Their details had been hacked by a group and provided to the media. Kelly was fired and vilified by the police chief and city manager in Norfolk, who called his actions ‘egregious’.

In an interview with DailyMail.com, he explained why he thought Rittenhouse was innocent from the beginning.

‘I was very surprised when he was charged soon after the shooting with these murders and the shooting of the third victim,’ he said.

Kelly, a self-confessed ‘news junkie’, saw that a GoFundMe account for Rittenhouse had been canceled, and a site called Give Send Go had set up another page for him.

He logged on and donated, making sure to leave out personal details because he says he didn’t want to associate himself with the police department.

‘I was interested in giving him the chance to defend himself in front of a jury. I know that lawyers are expensive, and it’s hard sometimes to get the message out there. I wanted to make sure that he had the means necessary to make his claim in court.

‘It mattered. The comments I made, my belief that he has a strong claim for self-defense was a personal opinion. I didn’t want my city or police department to be associated with it, so I chose to donate anonymously.

‘It was only after the hackers broke into it that they were able to connect those dots,’ he said.

A hacker group called ‘Distributed Denial of Secrets’ obtained his name and email address from the fund and provided it to The Guardian, which published a story including his name. The Daily Dot followed.

Within a day of it coming out, the Norfolk Police Department was receiving widespread calls to fire Kelly from all over the world.

‘It wasn’t people local, it was people from all around the country who read an article and sent a nasty tweet. In the absence of that outcry, there would not have been any kind of disciplinary action against me, I’m confident,’ he said.

The city decided that the comments ‘eroded’ the public’s trust in the police and Kelly was fired in April.

He has since filed a grievance, but the process is ongoing and in the meantime, he’s had to survive on his savings. 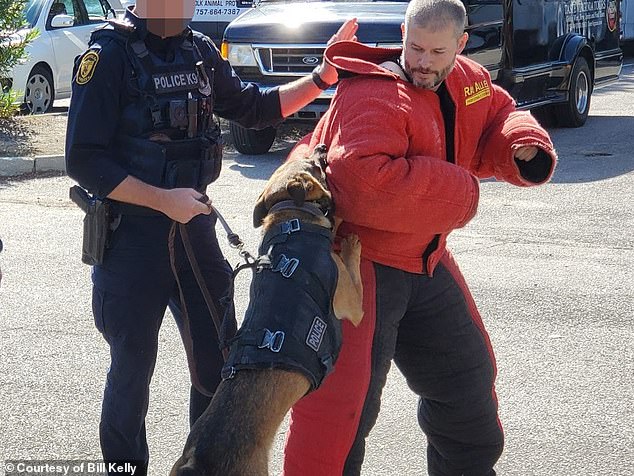 Seven months ago, long before the trial had even started, 42-year-old Kelly was fired for donating anonymously to the teenager’s then-growing defense fund 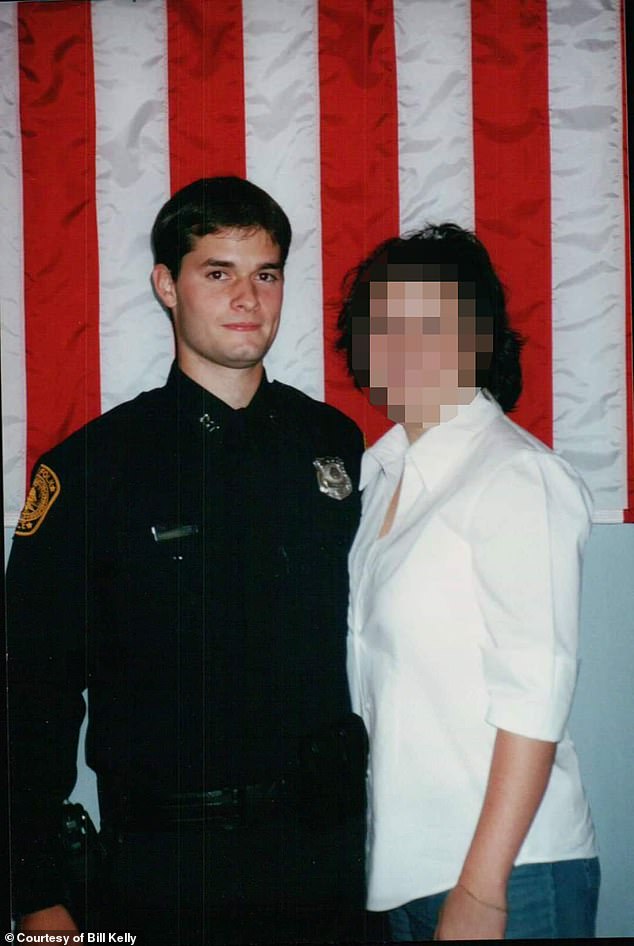 Kelly, a 19-year veteran and father-of-three who had moved into the internal affairs division at the time, made a $25 donation to a Give Send Go online campaign for Rittenhouse’s legal team after watching social media videos and journalists’ footage from the August 2020 Kenosha riots 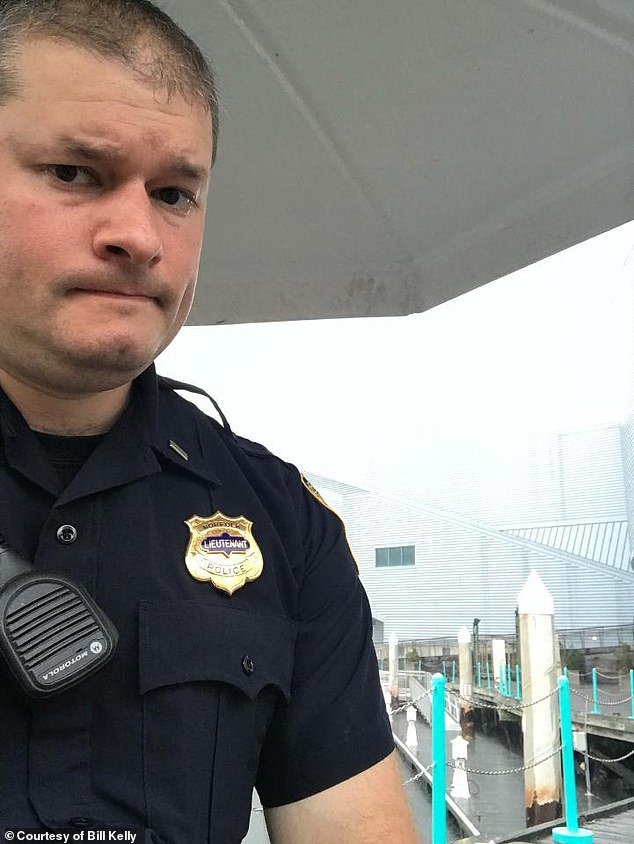 Kelly is now demanding his job back from the woke, ‘hypocrite’ police chief who fired him

Speaking from his home in Norfolk, he said he wishes the city officials had waited at least until tensions surrounding the case had calmed, if not until the trial.

‘This is America. You can agree with your neighbors and other people in your community and you can disagree with them. Just because someone has a different opinion than you, it doesn’t mean you should destroy their lives, take their job away.

‘My opinion on the self-defense claim of Mr. Rittenhouse has no impact on my ability to do my job as a police officer.’

He says the only reason he was fired was because he supported the teenager.

‘If I had a different opinion and I donated to a fund for the victims and made comments about how Mr. Rittenhouse was a murderer, nobody would have cared or tried to get me fired.’

In his grievance, he points to the fact that the police chief Larry Boone attended a BLM protest in May last year in full uniform, while on duty.

In the photo, Boone is holding a sign that reads Black Lives Matter, with the names of people who have been shot by cops – including some in Norfolk – around it.

‘The hypocrisy is dumbfounding. For the leader of our organization to be able to advocate support for a movement that is at the very least divisive in America today, in uniform while on duty… he was holding carried the name of a person who had recently been shot by a Norfolk police officer.

‘The sign demanded justice for that person, but that shooting was still under investigation to determine whether or not that officer should be charged criminally. It’s very inconsistent.

‘Yet I cannot, off-duty, on my own time make a donation and some comments that are well within the realm of public, acceptable discourse?’

The bigger issue, he says, is that he was fired for daring to have an opinion that went against woke officials and public pressure to condemn the teenager.

‘The outcome of the trial has nothing to do with my vindication – right or wrong, an American has the right to express their opinion within the realm of public discourse.

‘That same freedom exists regardless to the outcome.’ 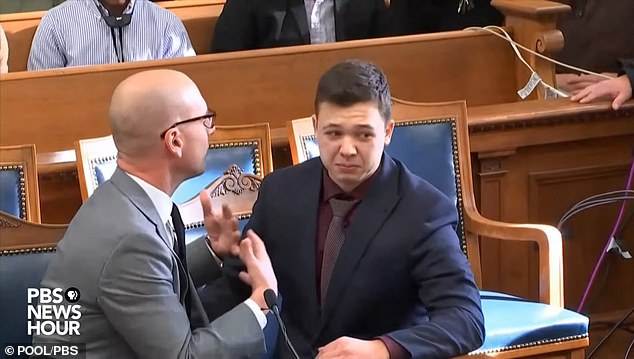 Now, he says the censorship of right-wing political views is ‘chilling’ police officers all over the country.

They feel ‘disposable’ unless they submit to a liberal ideology.

‘It made me feel disposable. Not only how it affected me, how it affected other officers. I was contacted by others who said they immediately deleted their social  media accounts after I got fired out of fear that they would go through them and find something innocuous to use against them.

‘I’ve been contacted by officers who say, “what if Trump runs in 2024 and I put a sign for him in my front yard, can media get a hold of that? If enough people complain, will I lose my job?”

‘The effects of this kind of censorship are wide. It ripples through the entire department. It’s a chilling effect.’

Kelly and his wife have been surviving on her salary as a school teacher and his savings to get by, but he is hoping he will be reinstated soon and given backpay.

The couple have three kids, the oldest of whom is 18.

He is desperate to return to work and was just ten months away from vesting for his pension when he was fired. If he doesn’t get his job back, he’ll lose the pension he worked almost 20 years for.

Kelly said that even though Rittenhouse has now been acquitted, he does not believe public discourse will change because people have ‘dug in’ to their opinions.

‘I don’t think the discourse will change. People are dug in on their heels… they’ll point to some other boogie-man as an excuse as to why he was acquitted. They won’t be forced to look at the facts of the case. I don’t think they’ll change their mind.

‘Honestly, most of America is pretty polarized. People on both sides who seem to be ideologically dug in to their position.

‘They try to view fact patterns through it and it’s hard to break free from it,’ he said.

The City of Norfolk did not respond to inquiries about whether it intended to give him his job back.

He is hoping for a hearing date at the end of January, but wants to resolve the issue privately before then.