Virgin Orbit has targeted its third attempt at space flight for Sunday.

The launch window from California’s Mojave Air and Space Port is set for January 17 between 10am and 2pm local time, according to a tweet from Virgin One, with backup slots on January 24 and 31.

This will be Virgin Orbit’s third trip to the launch pad – previous ones were aborted in May 2020 due to engine trouble and in December by a surge in coronavirus cases.

If all goes well, rocket will drop free  from the carrier plane Cosmic Girl at approximately 35,000 feet and float into orbit.

‘Our Launch Readiness Review [LRR] is complete, our hardware looks great, and our customers are ready,’ the company tweeted.

‘We’re following through on the last actions identified at our LRR. Our launch is now targeted for NET [no earlier than] Sunday, Jan. 17, with additional windows in January if needed.’

If all goes according to plan Sunday morning, Cosmic Girl will lift off with LauncherOne tucked under one of its wings.

The rocket, which is deigned to deliver small satellites into space, will drop free at approximately 35,000 feet and float into orbit. 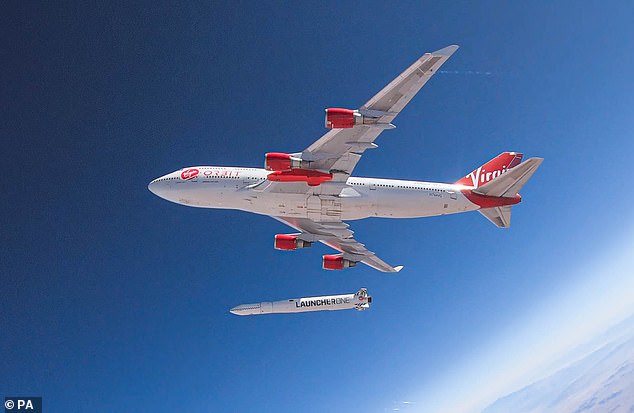 If all goes well LauncherOne will drop free from its carrier plane, Cosmic Girl, at 35,000 feet and float into orbit

Ten CubeSats from NASA and various U.S. universities will be aboard LauncherOne, which can deliver more than 1,000 pounds of payload to a low-altitude equatorial orbit of 1,200 miles, or up to 661 pounds to a 310-mile-high polar orbit.

If it reaches an altitude of 50 miles it will be the first time Virgin Orbit has successfully launched something into space.

The Richard Branson-owned division postponed LauncherOne’s first orbital test flight on May 24, 2020 due to a problem with a sensor.

‘Everything has been proceeding smoothly: team, aircraft, & rocket are in excellent shape. However, we have one sensor that is acting up,’ the company tweeted.

Ten CubeSats from NASA and various U.S. universities will be aboard LauncherOne, which can deliver more than 1,000 pounds of payload to a low-altitude equatorial orbit of 1,200 miles, or up to 661 pounds to a 310-mile-high polar orbit

‘Out of an abundance of caution, we are offloading fuel to address, it said, adding the launch was ‘scrubbed for today.’

Another attempt, on May 25, achieved liftoff and saw LauncherOne release from Cosmic Girl, but its engine quickly died and it plunged into the Pacific.

According to the company, the failure was caused by a break in a liquid oxygen feed line to the rocket’s first stage engine.

LauncherOne’s first launch in May 2020 was a bust, as the rocket’s engine died shortly after detaching from Cosmic Girl

‘History is not terribly kind to maiden flights,’ said Will Pomerantz, Virgin Orbit’s vice president of special projects. ‘Taking my best faith estimate, about half of maiden [rocket] flights fail. So that’s sort of the historical odds we’re against.’

Pomerantz insisted the Virgin Orbit team had done everything they could to prepare for the launch.

‘You essentially get to a point where you have looked under every rock and verify that there’s nothing more for you to do to verify that the system is ready.’

‘That’s what we have done.’

In December, another attempt, dubbed ‘Launch Demo 2,’ was aborted from New Mexico’s Spaceport America because of a surge of coronavirus cases in Los Angeles, where Virgin Orbit is based.

The company said several team members had tested positive, though there was no transmission between staff.