Virgin Media O2 is handing out an extra 15million GB of free data to the National Databank to help people in need stay connected during the cost of living crisis.

Nine in 10 low income households say they are worried about their finances and with the the cost of essential bills such as food and energy rising, some say they may be forced to ditch the internet connection to save money.

Around 2million homes are at risk of digital inclusion due to rising costs, despite 85 per cent of households saying connectivity is vital.

The National Databank, founded by Virgin Media O2 and digital inclusion charity, Good Things Foundation, has been described as a foodbank but for free mobile data, texts, and calls.

Virgin Media O2 launched the free data boost one year ago for households struggling with staying connected, originally pledging to help over 200,000 people get connected by the end of 2023.

Since it launch, it has handed out 50,000 SIM cards and more than 10,000 O2 voucher codes have been issued. You can find out here if you’re eligible to benefit from free data on the National Databank website.

The telecoms giant said the initiative has helped those at risk of data poverty to stay connected, to access online services such as medical appointments or benefits such as Universal Credit, and to apply for jobs or attend virtual job interviews.

The data pledge extends Virgin Media O2’s original commitment to the National Databank from 46million to more than 61million GB of data donated by the end of 2025.

It means that people most affected by the rise in the cost of living can now receive 20GB of free O2 mobile data per month – an increase from 15GB per month, available via the National Databank.

One of the households that has benefitted from the free mobile data scheme has said the support has lifted a huge weight off her shoulders.

Kay is severely dyslexic, which she has said has impacted her work options as she struggles to read and write. As well as working in retail, Kay is also a part time carer to her husband Paul who is battling several illnesses.

She was put in touch with the National Databank when her Paul’s other carer suggested they reach out for help, after Paul was forced to save up his data in order to contact his doctor.

Kay said: ‘Once Paul had data from Virgin Media O2, he thought I would get a lot out of this service as well. So, he called the National Databank on my behalf to get me set up with an O2 SIM card as well. 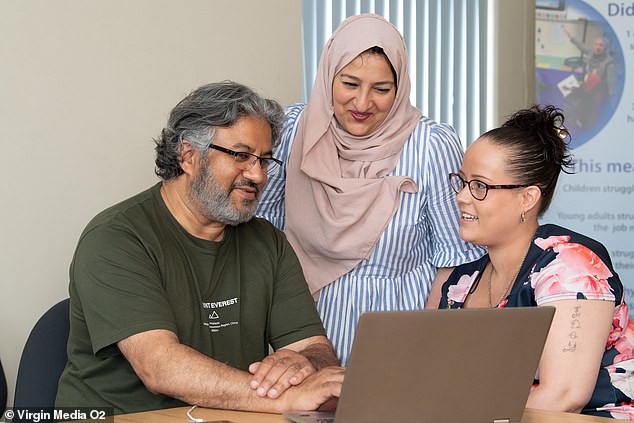 Kay found the National Databank through her partner’s carer, and has said that the support has changed both of their lives, helping them stay connected without worrying about the cost

‘I need data to live – I need it to speak to my kids. It keeps me sane. I need it to work – without it I couldn’t manage my job.

‘Knowing that this monthly expense is taken care of is such a huge weight off my shoulders’.

‘Then they called to check in on us regularly and make sure we had everything we needed. The support from the National Databank has helped me in a lot of ways.’

Since receiving free mobile data from the National Data bank, Kay can now access a dyslexia translation app on her phone that can read messages to her, and allow her to craft and compose messages, which she said has changed her life.

‘Having the data from Virgin Media O2 means gives me more independence. I don’t have to lean on my partner or family for something as simple as going to the shops.

‘Before getting the O2 SIM card from the National Databank my partner always had to come to the shops with me to read the food labels. Now I can do that on my own!

Knowing this monthly expense is taken care of is a huge weight off my shoulders. I have more freedom and independence.

She advises that for those who are struggling, they shouldn’t be scared to reach out to the organisations who offer support.

Kay said: ‘Don’t be scared to ask for help.

‘There are so many things in place like the National Databank that can help you.

‘Having a disability can be frustrating and make you feel alone.

‘But thanks to the National Databank I can take better care of my family. I also have much more freedom and independence. The O2 data is a lifeline – I’d recommend the Databank to anybody who asks.’ 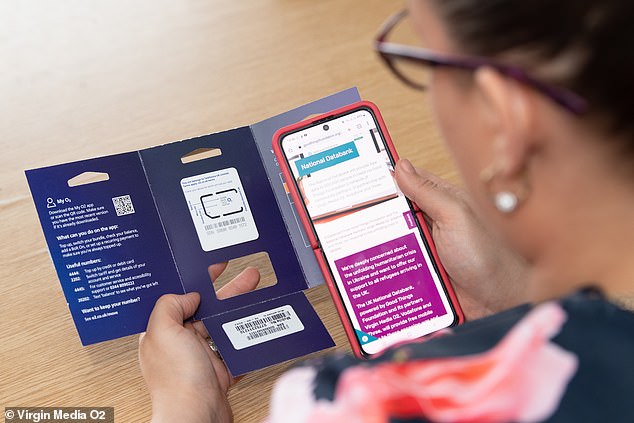 Kay, who is severely dyslexic, said the free mobile data has helped her with her job, and day to day life, and urges others in the same boat to reach out to the organisations offering support

The National Databank is open to all mobile operators and provides a central hub where community groups can access free ‘data voucher codes’ and SIM cards for anyone who needs them.

And, as a growing number of households struggle to afford data, the initiative is calling other mobile networks and businesses to join the National Databank.

Earlier this summer, Greggs Foundation signed up to the National Databank, and Virgin Media O2 announced it had re-homed 10,000 smartphones to people who need them via its Community Calling initiative with environmental charity, Hubbub.

Those accessing free data have also be offered additional support, including digital skills training and signposting to other essential services.

Helen Milner OBE, group chief executive of Good Things Foundation, said: ‘Having enough data in our increasingly digital society is not just a nice to have, it’s an absolute essential.

‘Together, we can help address the issue of data poverty in the UK once and for all.’

While Lutz Schüler, chief executive of Virgin Media O2, added: ‘We know how important it is for people most affected by the rise in the cost of living to have access to free mobile data so they can get online and stay in touch with loved ones, and access essential services, from virtual medical appointments, to job interviews and training.

‘It’s part of our mission to upgrade the UK where we want to end data poverty for good and create a better, more connected country for everyone.’

Another way to save on internet bills is by checking out social tariffs on offer from telecoms giants.

Millions of households could save up to £144 a year on broadband by taking advantage of ‘social tariffs’, but have yet to claim.

Just 1.2 per cent of those eligible have applied for the discounted broadband scheme meaning they are paying more for internet connection than they need too.

Only 55,000 households have applied for the specially discounted broadband, available to 4.2million households currently on Universal Credit, Ofcom says.