Vinnie Jones has revealed the final message his late wife Tanya wrote for him before her death in 2019 following a six-year battle with cancer.

The former footballer, 55, took to Instagram on Sunday to thank his fans for their support and reveal the touching words his love left for him inside a card.

It comes after Vinnie appeared on Piers Morgan’s Life Stories on Saturday where he said it was ‘impossible’ for him to remarry during the very emotional interview.

Couple: Vinnie Jones has revealed the final note his late wife Tanya wrote for him before her death in 2019 (pictured together in 2007)

Vinnie shared two pictures on Sunday, with one showing the front of the card which read: ‘Always believe something wonderful is about to happen.’

While the first picture showed Tanya’s handwritten note which read: ‘To my love Vin,

‘Something wonderful happens to me every day… Being with you! You are my morning sunshine the moment I wake.’

The media personality accompanied the snaps with his own caption, revealing that the note was ‘the last card Tansy sent me’. 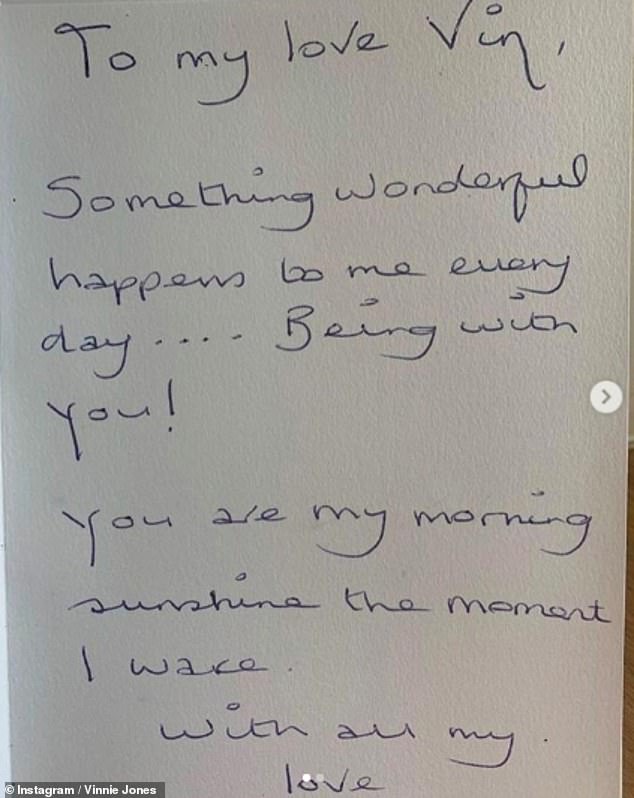 Personal: The touching handwritten note from Tanya said ‘something wonderful happens to me every day… Being with you! You are my morning sunshine the moment I wake’

He wrote: ‘I would just like to thank everybody for their really kind messages and support towards myself and especially Tansy.

‘It is overwhelming to feel so much love from this great country of people. With your backing I will stay strong and help others on this journey of life good and sad. Thank you everyone! Vinnie.’

On Saturday night Vinnie admitted it’s ‘impossible’ for him to marry again after Tanya tragically passed away from cancer last year. 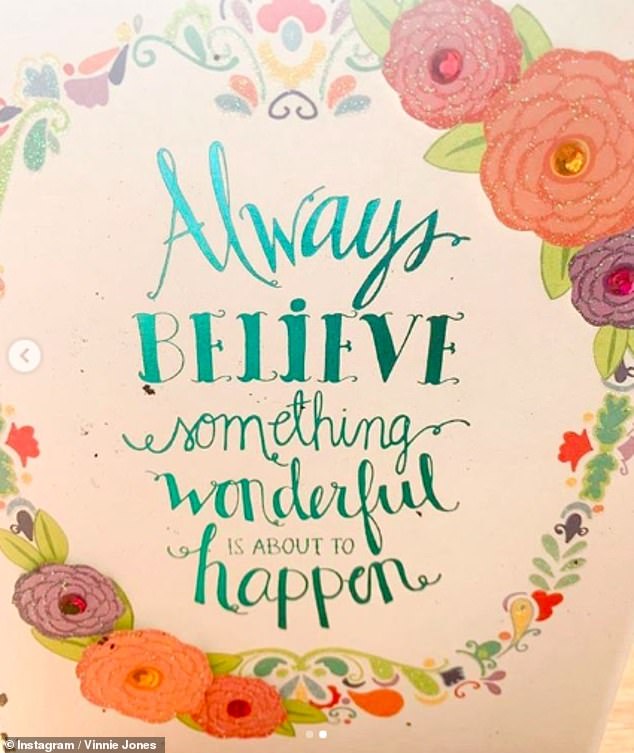 Note: Tanya’s final message was written inside a card which had the message ‘always believe something wonderful is about to happen’ on the front 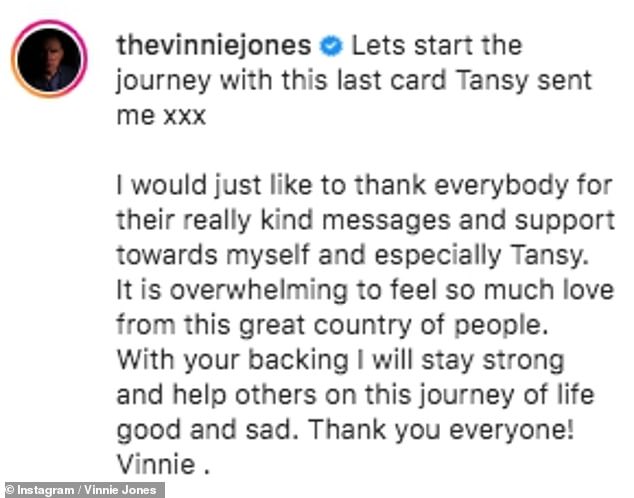 Thanks: Vinnie thanked his fans for their support and kind messages after the TV interview

In an moving interview for Piers Morgan’s Life Stories the ex-footballer said he’s had the ‘perfect one and done’ with his late wife, describing the prospect of finding love again as ‘the impossible question.’

Vinnie’s emotional discussion of Tanya’s passing left many viewers in tears, with others also praising the actor for speaking so candidly about his grief.

Tanya passed away in July 2019 after a six-year battle with cancer, leaving her family and Vinnie devastated.

The couple had been married since 1994 and met when they were just teenagers. 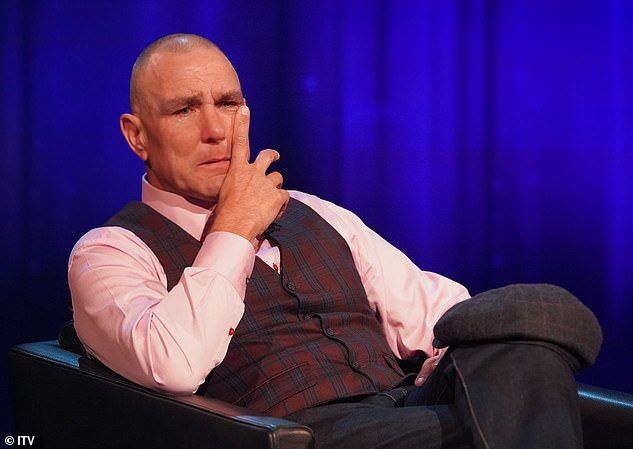 Unlikely: Vinnie admitted it’s ‘impossible’ for him to marry again after his wife Tanya tragically passed away from cancer last year during the very emotional interview on Life Stories

During his interview with Piers, Vinnie recalled the heartbreaking moment his wife passed away, telling him: ‘They said to us maybe days, maybe weeks, maybe months.

‘I was on my knees howling, you find yourself going to Forest Lawn cemetery to make arrangements before she passed. You think you’re in a horror dream, that is the only way to describe it.

‘I knew the pain was horrific, I knew it was time to stop and I begged the nurse to stop it. 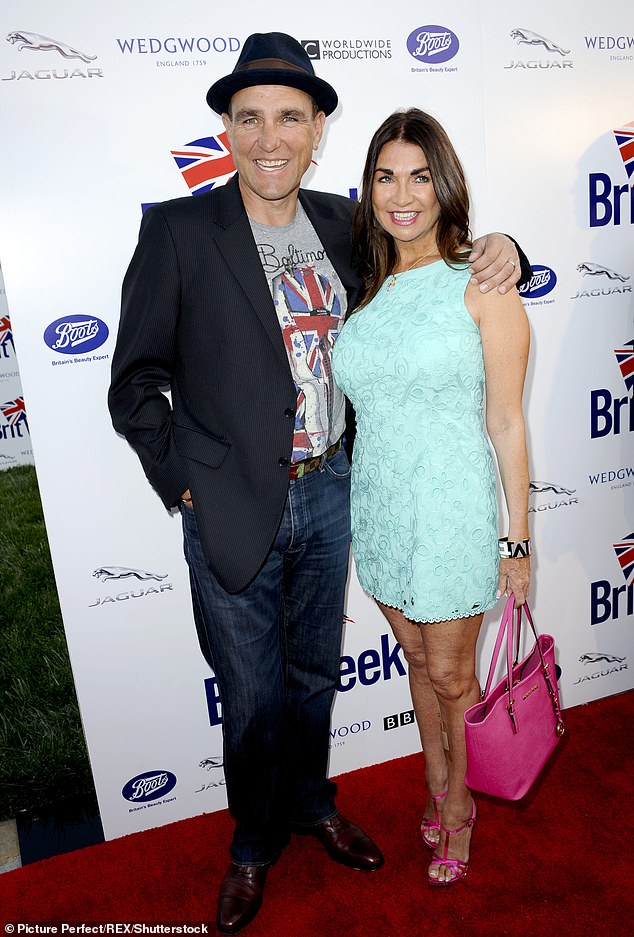 Love: Vinnie and Tanya had been married since 1994 and met when they were just teenagers

When asked whether he could ever face marrying again, Vinnie admitted: ‘I think that’s a impossible question to answer but if you asked me if I would get married again that would be an impossibility, she wouldn’t want that.

‘There won’t be another marriage Piers I can tell you that. It was the perfect one and done for me.’

Vinnie has spoken very candidly about his devastating loss in the past and in July revealed that he ‘still cries every day’ one year after losing his wife.

At the time he said that he now lives his life with her ‘guiding hand on his shoulder.

After the emotional episode of Life Stories aired dozens of people took to social media to praise Vinnie for showing his grief so openly. 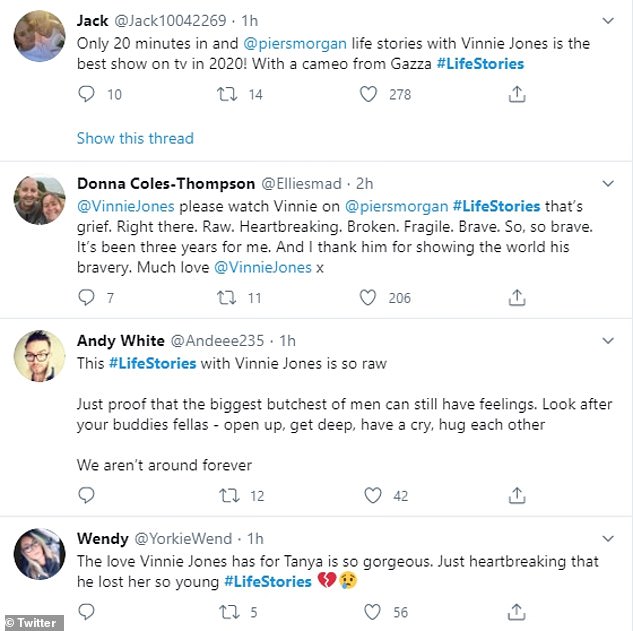 Emotional: Dozens of people said they were left crying as they watched the interview and praised Vinnie for speaking so candidly about his grief

One penned: ‘@VinnieJones please watch Vinnie on @piersmorgan #LifeStories that’s grief. Right there. Raw. Heartbreaking. Broken. Fragile. Brave. So, so brave. It’s been three years for me. And I thank him for showing the world this bravery.’

‘This #LifeStories with Vinnie Jones is so raw. Just proof that the biggest butchest of men can still have feelings. Look after your buddies fellas – open up, get deep, have a cry, hug each other. We aren’t around forever,’ one viewer mused.

While others admitted they had been left in tears at the show: ‘One minute in and Vinnie Jones has me balling. That quivering chin got me in the feels.’

The return of Life Stories is set to feature Captain Sir Tom Moore, the 100-year-old Army veteran who raised nearly £32.8 million for NHS charities during lockdown. 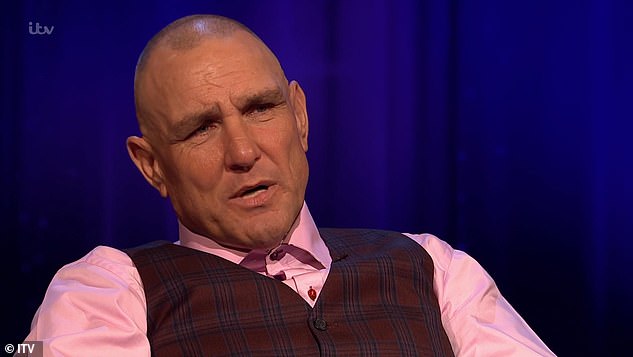 Candid: The former footballer told Piers Morgan that his marriage to Tanya ‘was the perfect one and done for me’ (pictured during the interview on Saturday)