The Vinland Map, which shows a section of North America’s coastline southwest of Greenland, is famed for being the earlies imagery of the New World, but a new analysist reveals it ‘is awash in 20th-century ink.’

Researchers at Yale University found the map believed to have been made in the 15th-century has a titanium compound used in inks first produced in the 1920s.

‘The Vinland Map is a fake,’ Raymond Clemens, curator of early books and manuscripts at Yale’s Beinecke Rare Book & Manuscript Library, which houses the map, said in a statement.

‘There is no reasonable doubt here. This new analysis should put the matter to rest.’

Even more, the study found that the map maker intentionally created a fake.

The 20th-century trickster used the modern ink to write out instructions for putting the map together as it would appear on a genuine 15th-century manuscript, which was done so over a Latin inscription.

The team believes the inscription is a bookbinder’s note guiding the assembly of the Speculum Historiale — an authentic medieval volume and the likely source of the map’s calfskin parchment.

The Vinland Map, which shows a section of North America’s coastline southwest of Greenland, is famed for being the earlies imagery of the New World, but a new analysist reveals it ‘is awash in 20th-century ink’

‘The altered inscription certainly seems like an attempt to make people believe the map was created at the same time as the Speculum Historiale,’ Clemens said.

‘It’s powerful evidence that this is a forgery, not an innocent creation by a third party that was co-opted by someone else, although it doesn’t tell us who perpetrated the deception.’

Yale obtained the map in 1965, proudly announcing that it proves the Norsemen, not Christopher Columbus, were the first Europeans to reach the New World.

However, the map has always been questioned by scholars who have found traces of modern ink in previous studies. 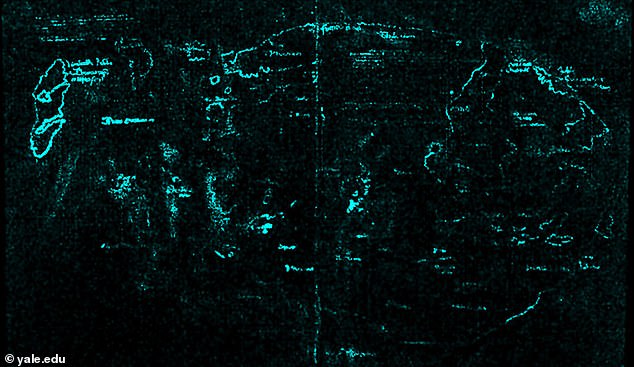 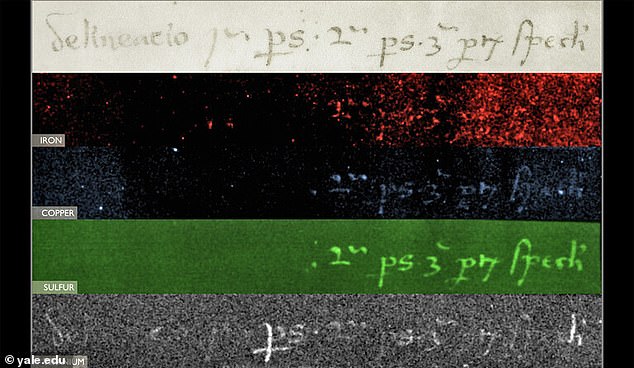 An inscription on the back of the map (top), possibly a bookbinder’s note for assembling the medieval volume with which it was originally bound, was overwritten in an apparent attempt to deceive. The bottom image shows the presence of titanium in the ink, which strongly suggests it is of modern origin, while the preceding three false-color images highlight elements that are consistent with medieval iron gall ink

And the latest analysis provides the clearest evidence yet that the map is a fraud.

‘The Vinland Map lacks the elaborate ornamentation of other medieval maps, such as the Beinecke Library’s collection of portolan nautical charts. Patched wormholes dot its parchment,’ the researchers shared in a statement.

‘Much of its ink appears faded.’

Medieval scribes typically wrote with iron gall ink, which is composed of iron sulphate, powdered gall nuts and a binder (the first two are primary elemental ingredients of iron gall ink, and the third is often present as an impurity).

The XRF analysis of the Vinland Map showed little to no iron, sulfur, or copper. Instead, the scan revealed the presence of titanium throughout the map’s ink. 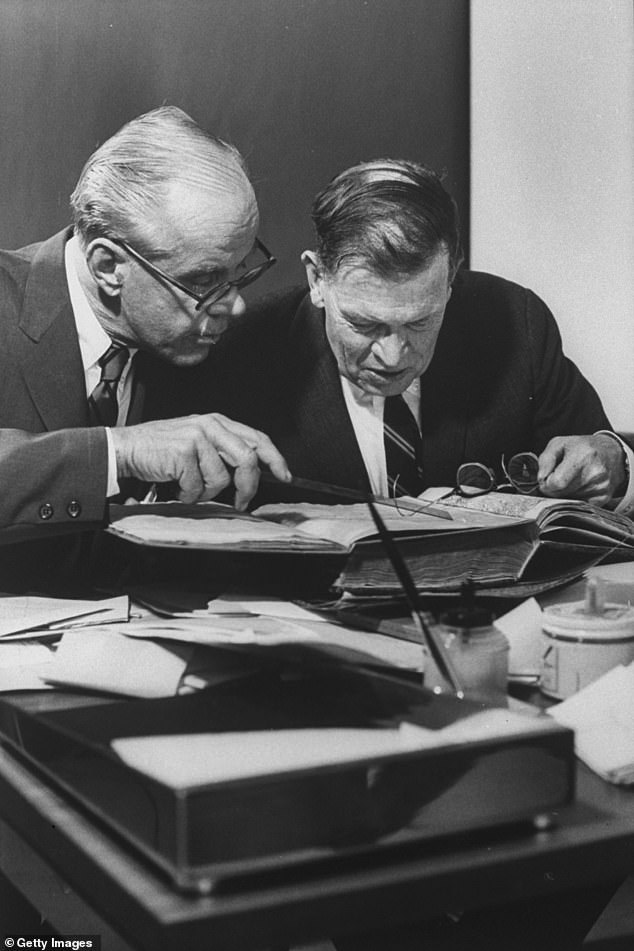 A scan of Vinlanda Insula, the portion of North American coastline that made the map famous, revealed high levels of titanium and smaller amounts of barium, which the team says is the strongest evidence against the map’s authenticity.

This is because the earliest commercially produced titanium-white pigments in the 1920s contained titanium dioxide and barium sulfate.

However, researchers had to be sure and did so by analyzing 50 manuscript fragments in the Beinecke Library’s collection that were produced in Central Europe during the 15th century – the same era the Vinland Map was supposedly drawn.

The results showed the fragments contain much lower levels of titanium than the map and much higher levels of iron. 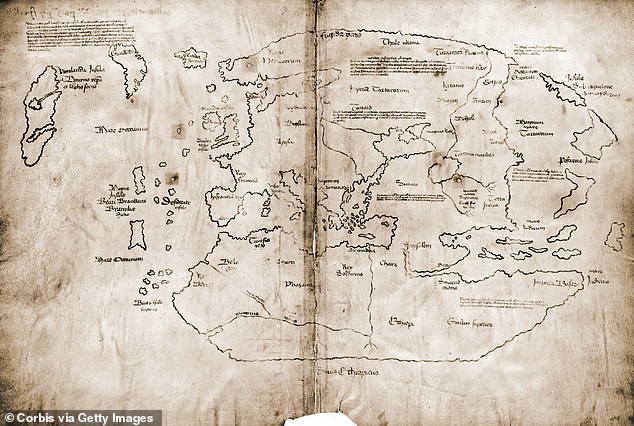 The map was said to prove the Norsemen, not Christopher Columbus, were the first Europeans to reach the New World

To confirm that the map’s ink was of modern origin, and that the anatase wasn’t simply unique and naturally occurring, the team performed field emission scanning electron microscopy (FE-SEM) on samples from the altered text of the Tartar Relation and the map.

Richard Hark, a conservation scientist who works with the Beinecke Library’s collections, said in a statement: ‘This process yielded highly magnified images of its ink’s components, which showed that the anatase particles closely resemble those found in pigment that was commercially produced in Norway in 1923. Nothing suggested that the anatase was naturally sourced.’

‘Having determined that the ink’s composition was consistent with an early form of commercially available titanium white, the team spotted evidence that the map is a deliberate forgery,’ the team wrote in the press release.