‘I don’t give a toss if people don’t like it – I can do what he does!’: Cameroon ace Vincent Aboubakar doubles down on criticism of Mohamed Salah… and says ONLY difference between them is Liverpool star has ‘opportunity to play in a big club’

Cameroon striker Vincent Aboubakar claims the only difference between him and Mohamed Salah is the Liverpool star has the chance to ‘play in a big club’.

Doubling down on his criticism of the Egyptian, Aboubakar says he ‘can do’ what Salah does and added that he doesn’t ‘give a toss’ if people disregard his opinion.

Aboubakar, who plays in Saudi Arabia for Al Nassr, told 90FootballFr: ‘I’m not impressed by him. I can do what he does. I just don’t have the opportunity to play in a big club.’

He added: ‘I understand people’s attitudes, he’s one of the best goalscorers in the Premier League. It makes sense that when you go on about a player like that, people will talk.

‘But I did say that it was my opinion, my point of view. I don’t give a toss if people don’t like it.’

Earlier this year, ahead of playing Egypt in the Africa Cup of Nations, Aboubakar took a swipe at Salah, claiming he is not on the same level as stars such as Kylian Mbappe, of Paris Saint-Germain.

The Cameroonian has long insisted that Salah does little to create in matches outside of his goals in what has been viewed as a bizarre critique of one of the best players in the world.

Salah has bagged 170 goals across the last five seasons for Liverpool and produced a match-winning display against Tottenham in a 2-1 win on Sunday.

He also bagged the African Footballer of the Year crown in both 2017 and 2018 – but Aboubakar remains deeply unimpressed. 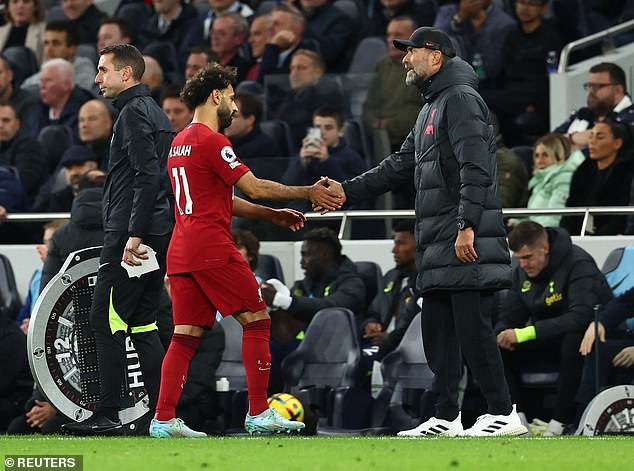 One person who certainly doesn’t agree with Aboubakar is Liverpool boss Jurgen Klopp, who believes Salah will be remembered as one of the best strikers ever.

‘When you look back, everybody will remember one of the best strikers you ever saw because numbers will be absolutely insane,’ Klopp said after the win at Tottenham.

‘He scored two goals and played like a real team player. Top performance and outstanding attitude.’