David de Gea hadn’t saved a penalty in more than five years and 25 attempts, so we had every reason to fear for Manchester United’s chances when it went to a shoot-out in Gdansk. Come to think of it, he hadn’t scored one either but that didn’t seem important at the time.

One by one the spot-kicks flew in. A 100 per cent record from both teams through the regulation five each and deep into sudden-death.

Ole Gunnar Solskjaer stood as far back as he could in his technical area, hiding nervously behind a phalanx of exhausted players. Amad Diallo sank to his knees and prayed. Others could barely look. 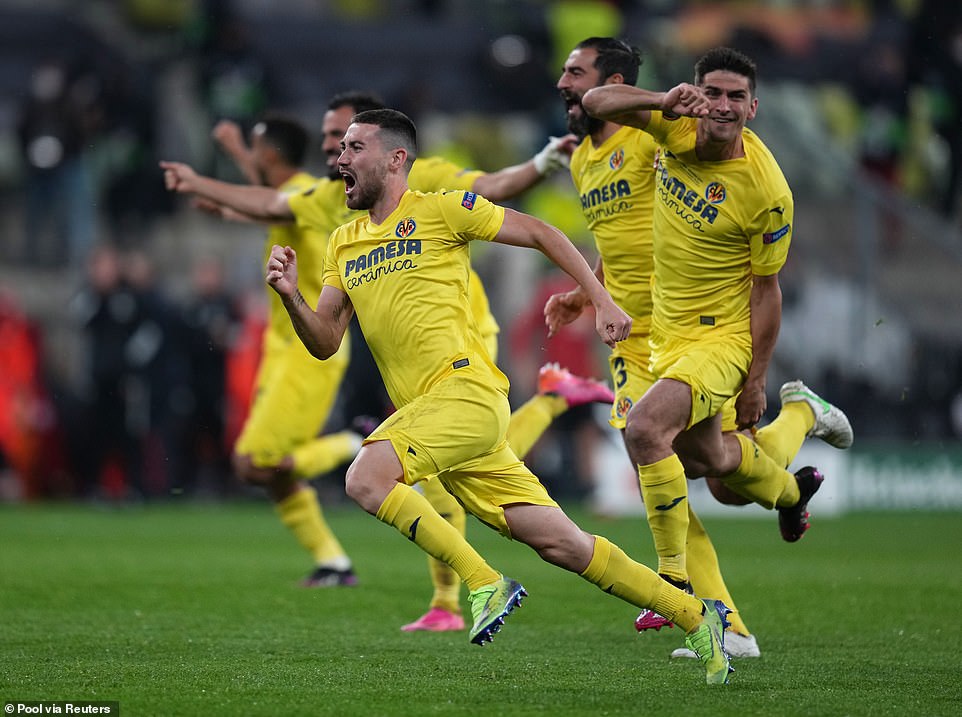 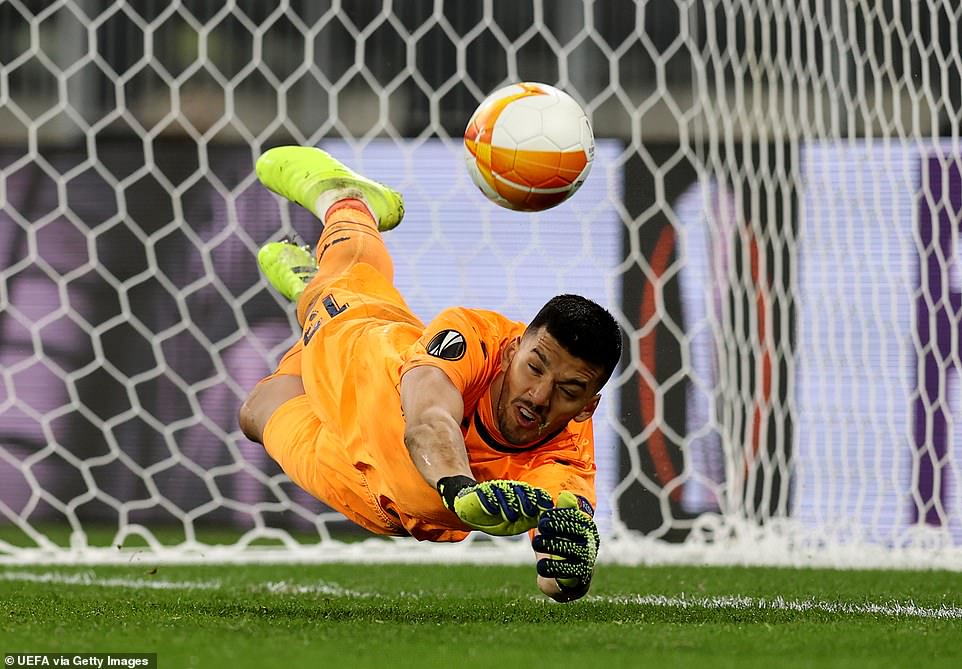 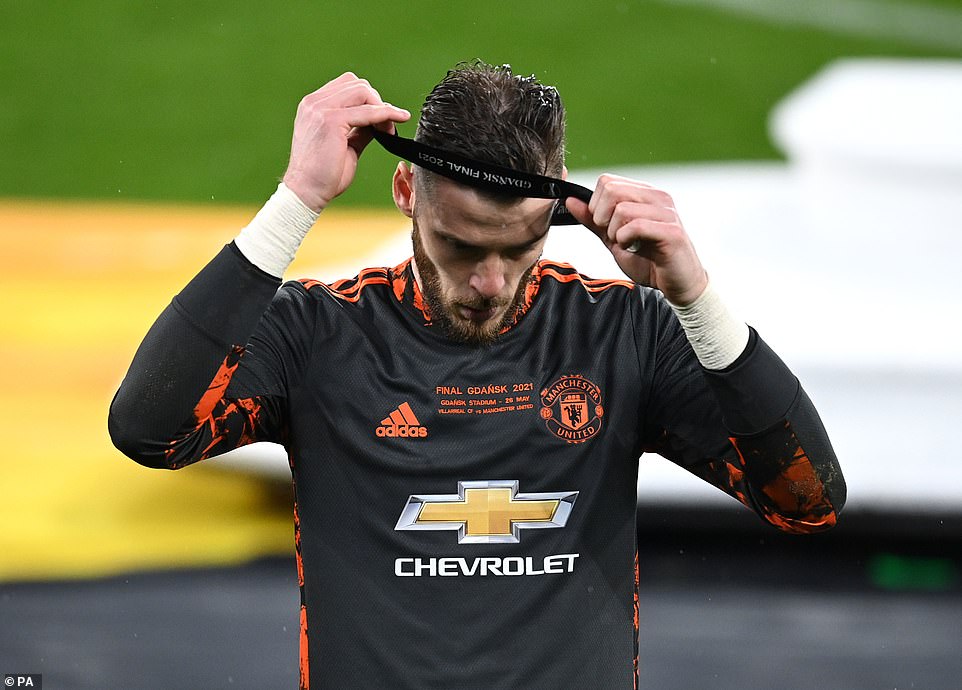 De Gea, along with most of his United team-mates, had quickly taken off their runners up medals after the disappointment 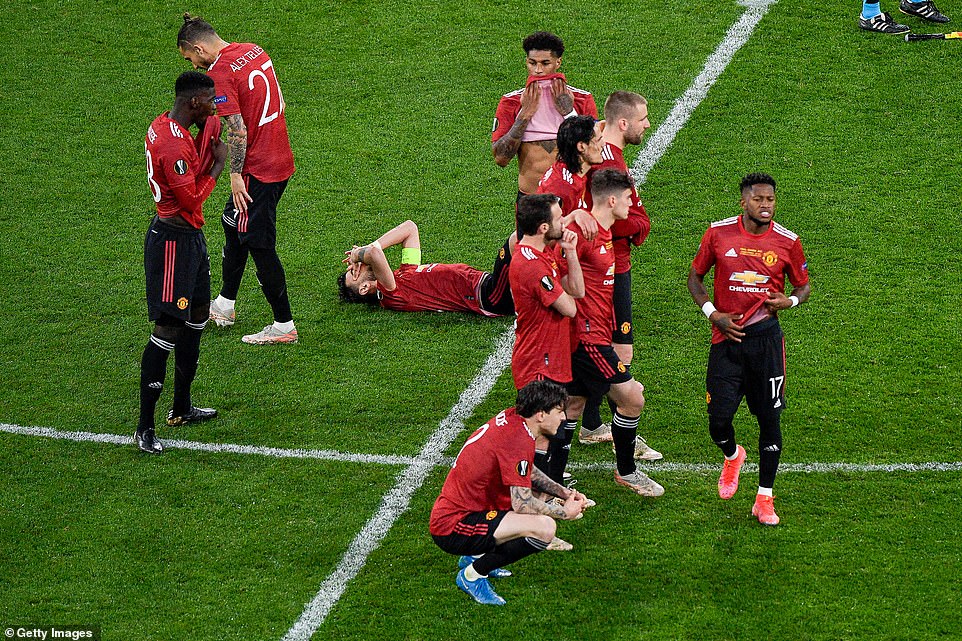 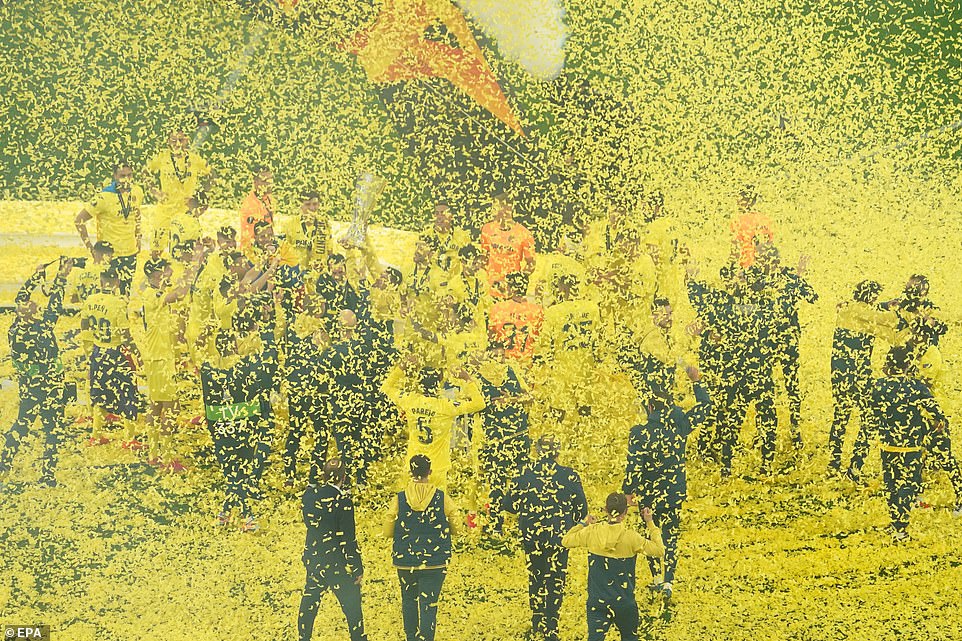 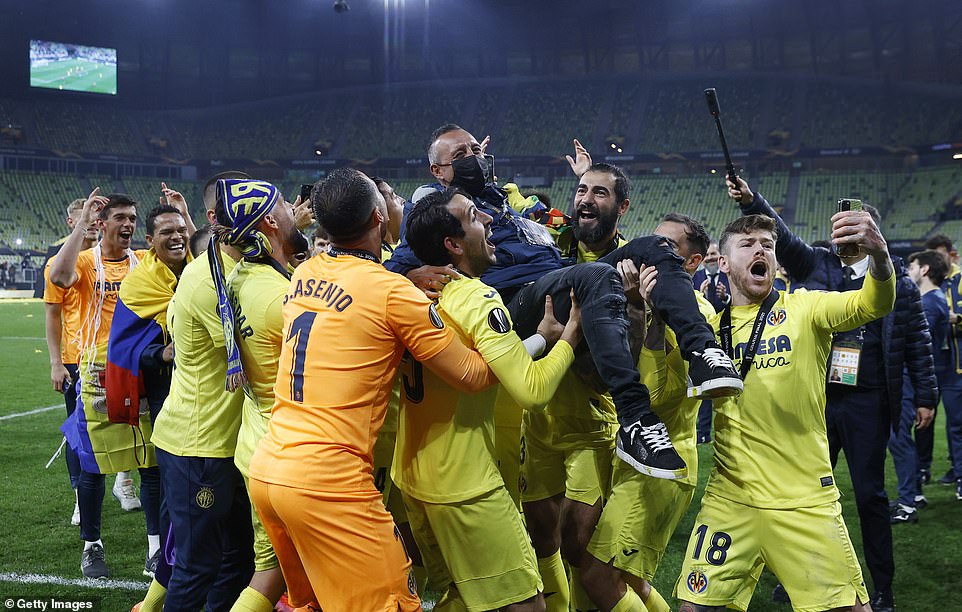 On it went. Villarreal goalkeeper Geronimo Rulli, once on the books of Manchester City, got a hand to efforts from Luke Shaw and Victor Lindelof but just couldn’t keep them out. He was getting a lot closer than De Gea though whose record now stands at 36 conceded, none saved.

So at 10-10, it fell to the two keepers. Rulli blasted his effort emphatically past De Gea, but his opposite number never looked comfortable as he stood over the spot.

De Gea went to the right and Rulli guessed correctly. As he smothered the ball, the yellow-shirted fans of Villarreal behind his goal erupted. A first ever European trophy for their club and a record fourth Europa League for their coach Unai Emery who was in charge of Sevilla when this final last went to penalties in 2014.

But what about Solskjaer? There was no first trophy as United manager. No glorious end to the season 22 years to the day since his momentous Champions League winner in Barcelona. No pot to show for all the progress he has made at Old Trafford.

Solskjaer’s achievements at United run deeper than simple statistics, but the facts are this was his 151st match in charge and only Dave Sexton has gone longer without a trophy at Old Trafford in the post-war era.

Once again his United have fallen short. Four losing semi-finals and now this, the most painful failure of the lot.

They came into the game as favourites against a club that finished seventh in La Liga this season – two places below the Real Sociedad team United brushed aside 4-0 on aggregate in the last 32.

Sociedad were far too open, though. Emery made sure Villarreal stayed compact and fought for every ball, starving United of space and the chance to break. They took the lead through Gerard Moreno before Edinson Cavani equalised for United in a game of very few clear chances.

By the end of the night, two clubs who had faced each other four times in history without scoring had hit the net 23 times.

Could Solskjaer have done more to tip the balance in United’s favour? It was odd that he waited until extra-time to make his first changes while Emery sent on five subs inside 90 minutes, keeping his team fresher. 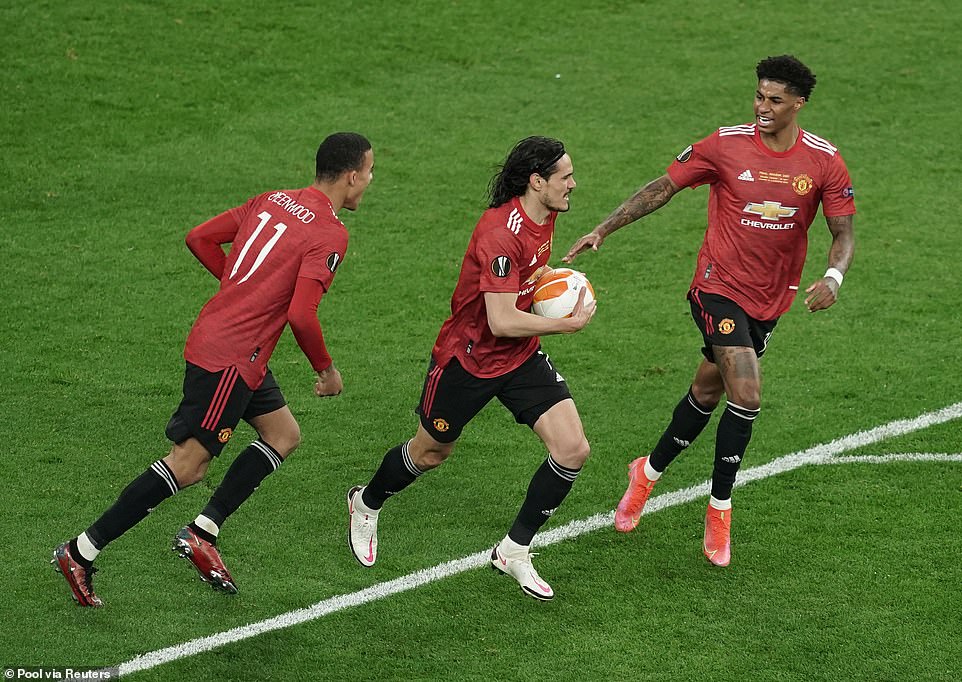 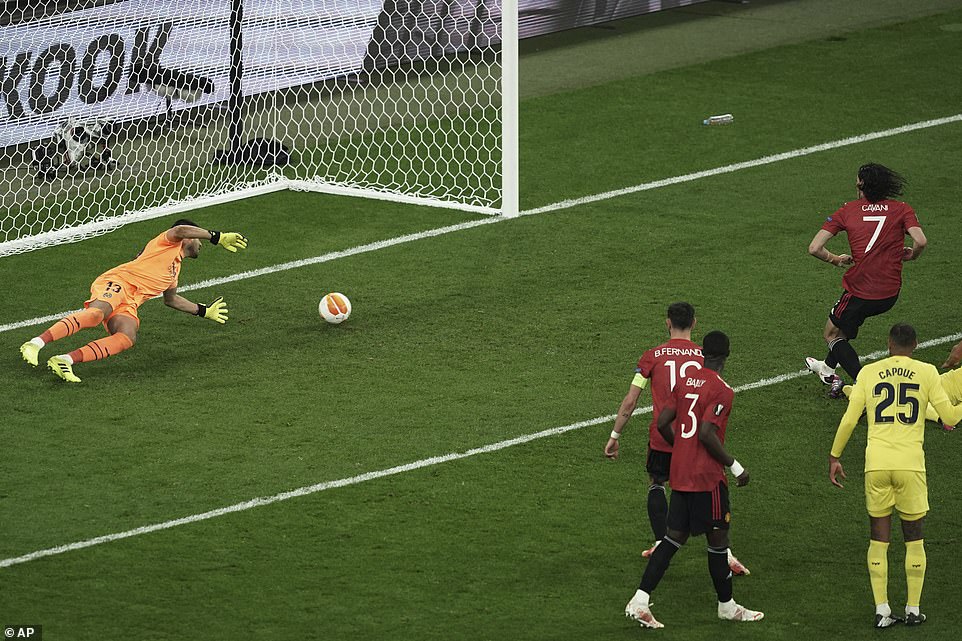 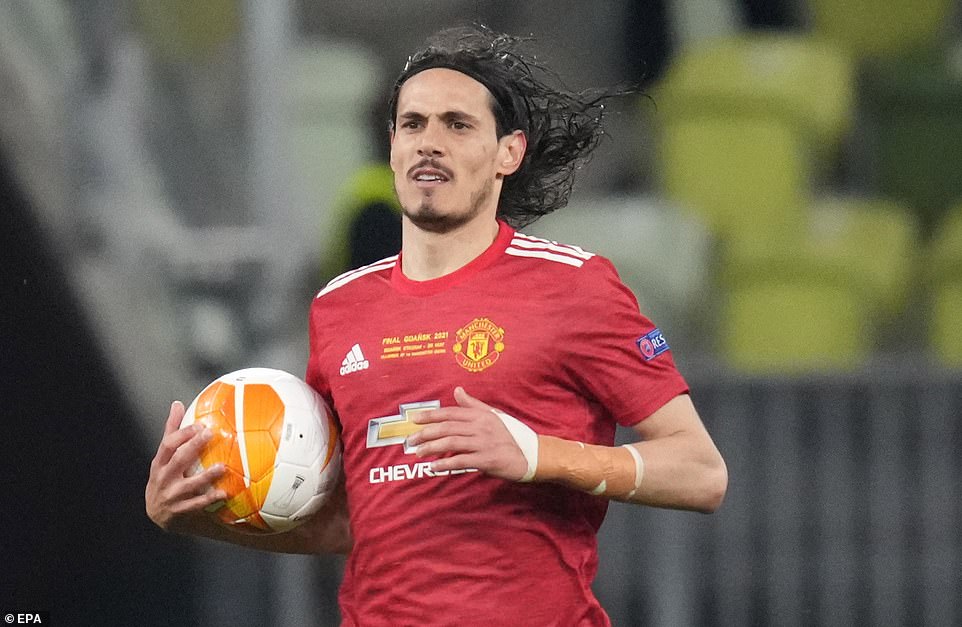 Given De Gea’s lamentable penalty record, could Solskjaer even have put Dean Henderson in goal for the shoot-out? Former United boss Louis van Gaal was known for that trick. It would have been a bold move but bravery is often rewarded on these occasions and United played within themselves again here.

One of the substitutes available to Solskjaer was one he admitted couldn’t really play as Harry Maguire lost his battle to return from ankle ligament damage. The United manager was forced to leave Fred on the bench for 100 minutes too due to injury.

Without the insurance policy of Maguire at the back and Fred in midfield for so long, it made sense for United to get on the front foot and they did their best. But there simply weren’t enough opportunities created or enough big performances from their main men.

Paul Pogba practically slunk away in extra-time when everyone – including the stadium announcer – was expecting Dan James to replace Marcus Rashford. 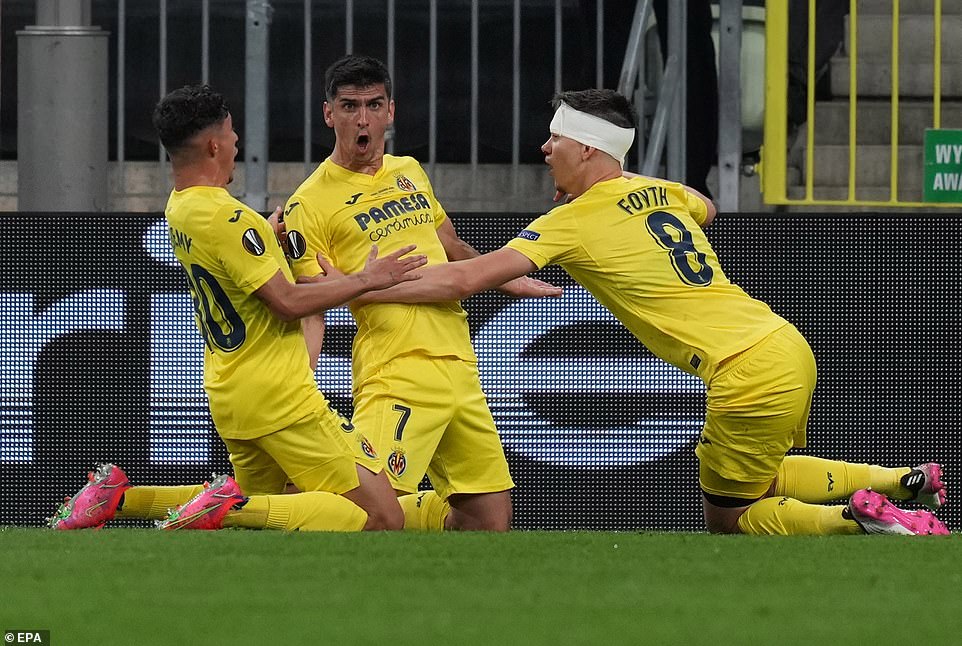 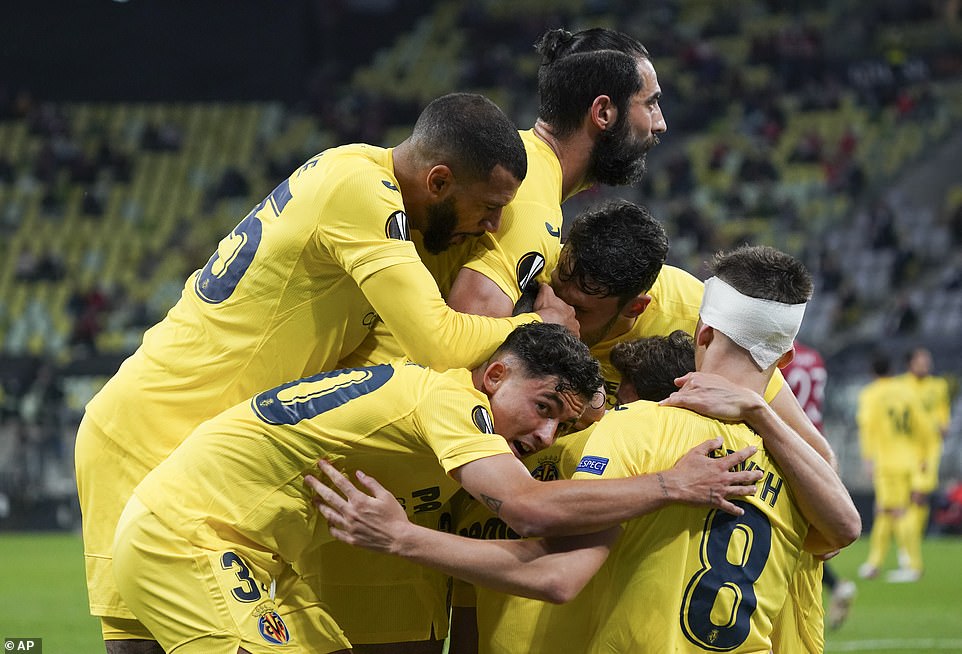 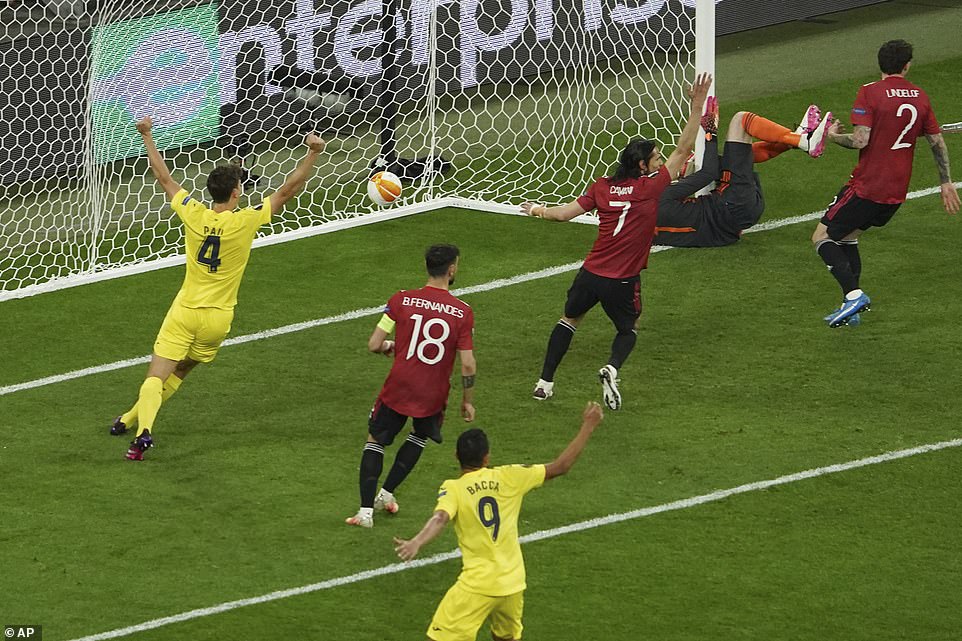 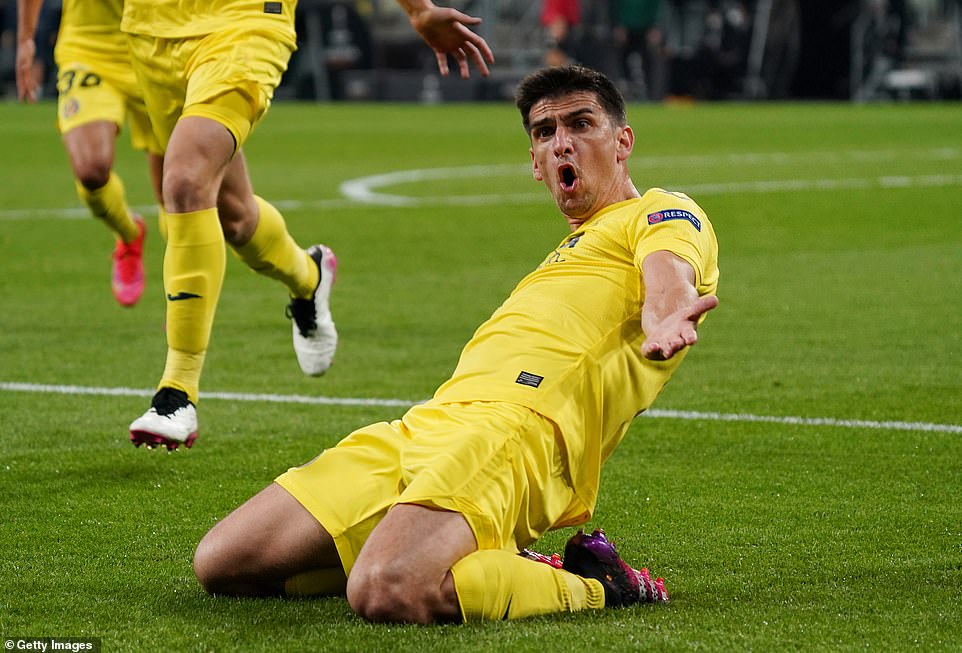 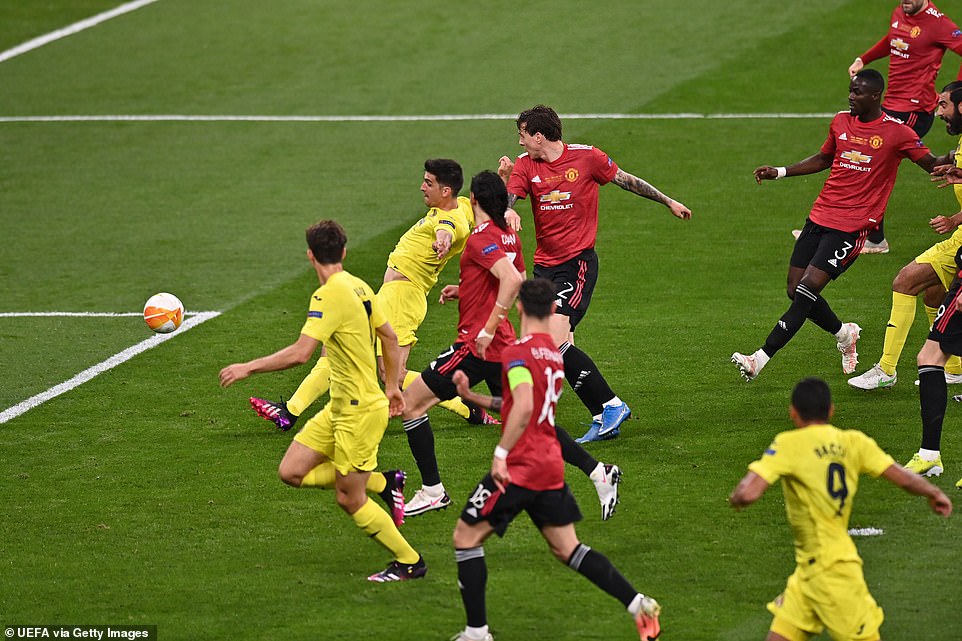 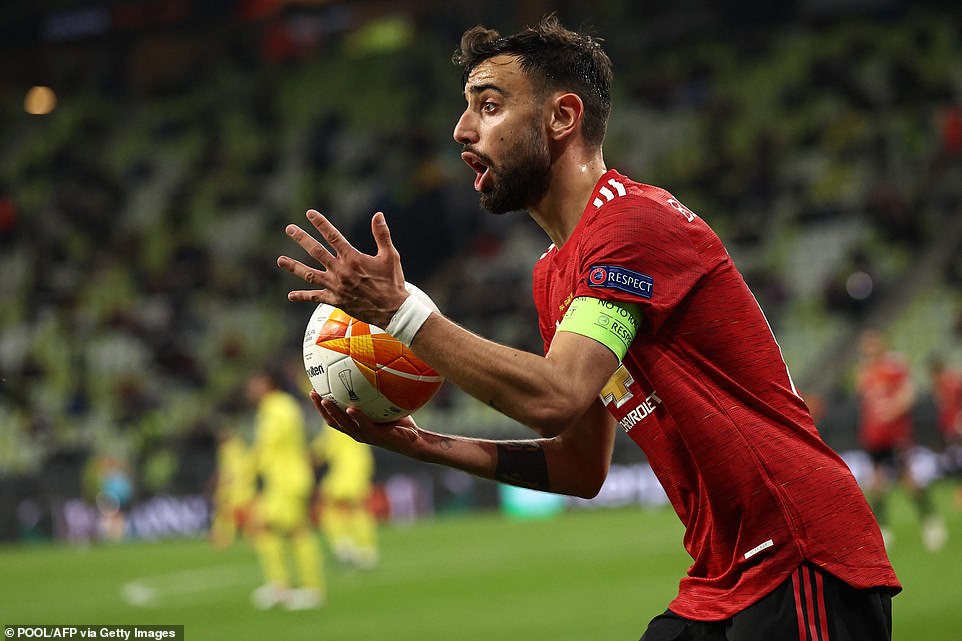 Bruno Fernandes, who captained United in the absence of Harry Maguire, cut an increasingly irritated figure in the showdown

Bruno Fernandes, captain for the night, embodied United’s frustration. He was in the ear of French referee Clement Turpin throughout, and in tears at the end.

It was frustration that led to United going behind in the 29th minute as Cavani ran back to make a challenge on Daniel Parejo and clipped the back of his heel with a niggly challenge.

Parejo took the free kick himself and curled an excellent delivery towards the edge of the six-yard box. Shaw lost track of Moreno and Lindelof grabbed Villarreal’s danger man by the shirt, but it wasn’t enough.

De Gea had no chance as the Spain striker met the ball first time with his right foot and did enough to turn it inside the post for his 30th goal of the season. 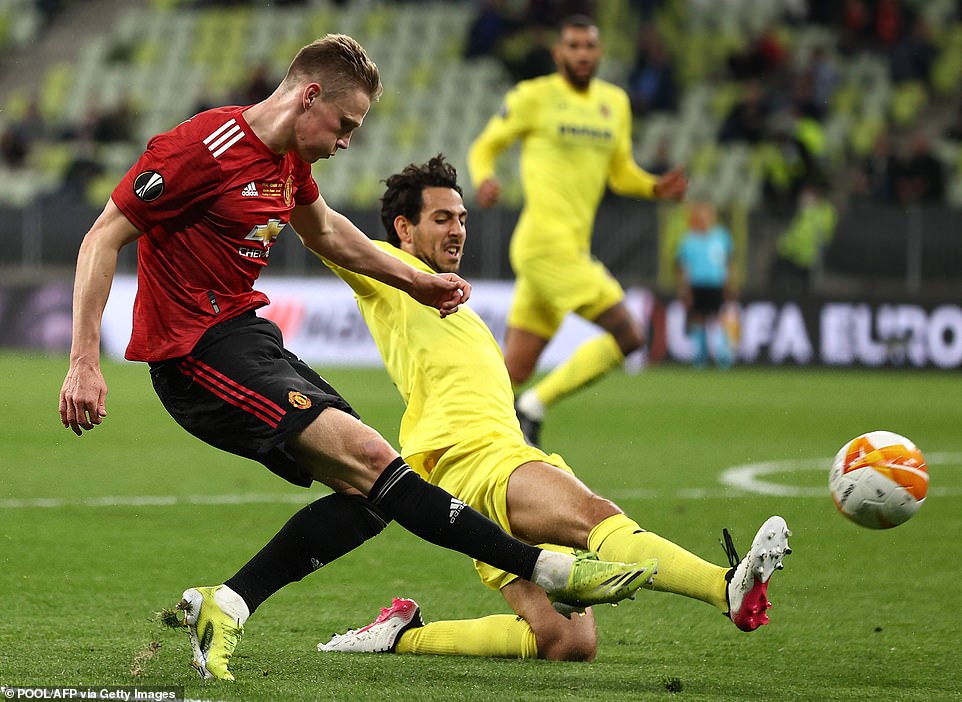 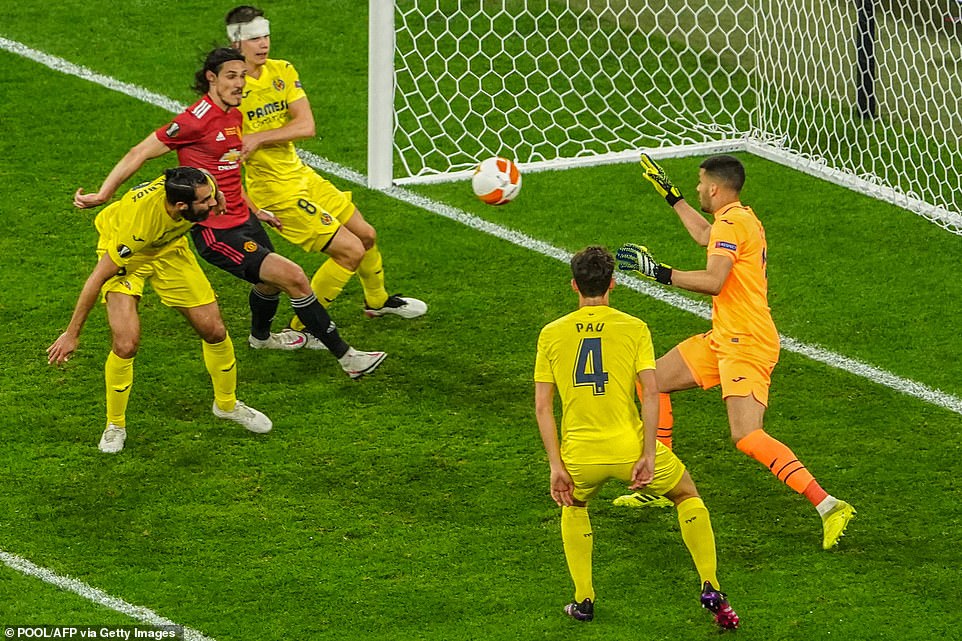 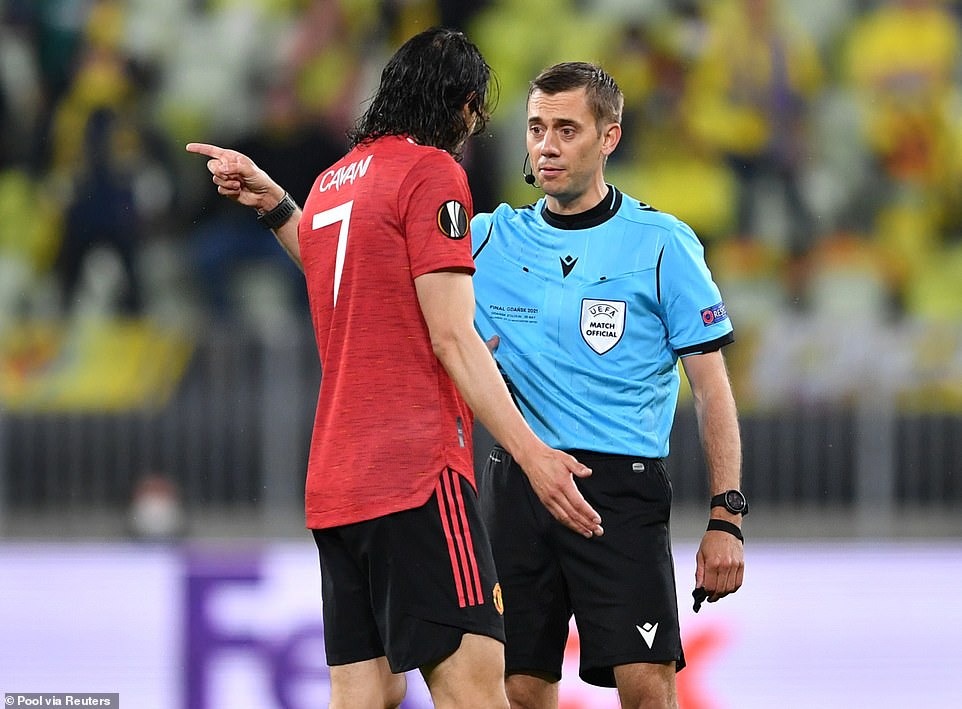 The goal sparked United into life and they were level in the 55th minute. Shaw swung over a corner from the left and the combative Raul Albiol cleared once again.

The ball looped towards the edge of the box where Rashford was waiting. He had done little up that point and, to be fair, Rashford’s volley was unlikely to trouble Rulli. But it took two deflections in a packed penalty area and landed kindly at the feet of Cavani who scored in an empty net for his 10th goal in 11 games.

Rashford wasted the best chance to score a decisive goal in normal time, allowing the ball to get caught under his feet from Fernandes’ cross as he turned the ball inches wide, so onto extra-time and penalties we went – agonisingly for United. 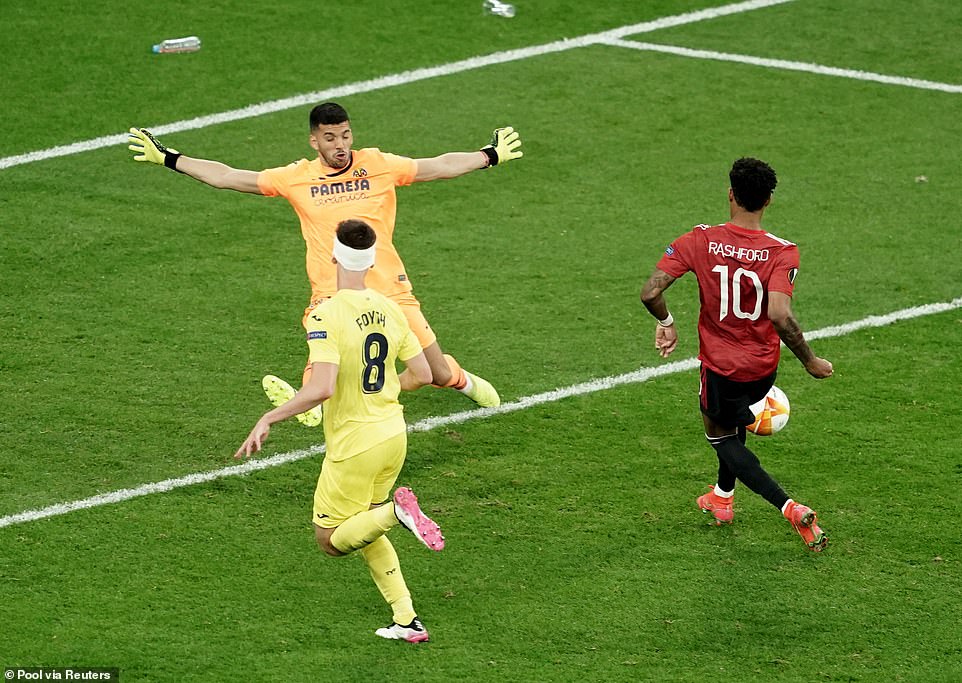 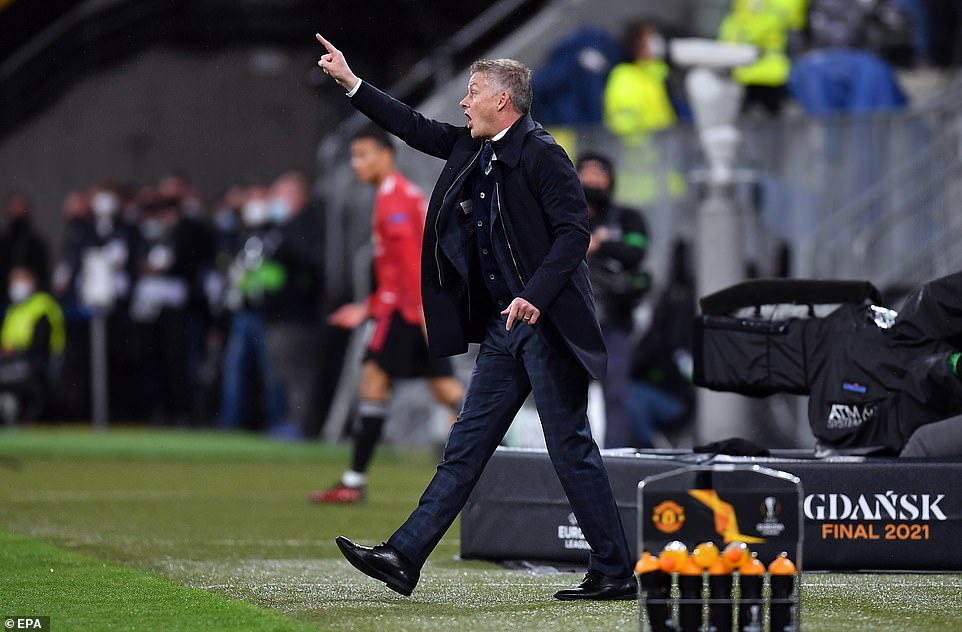 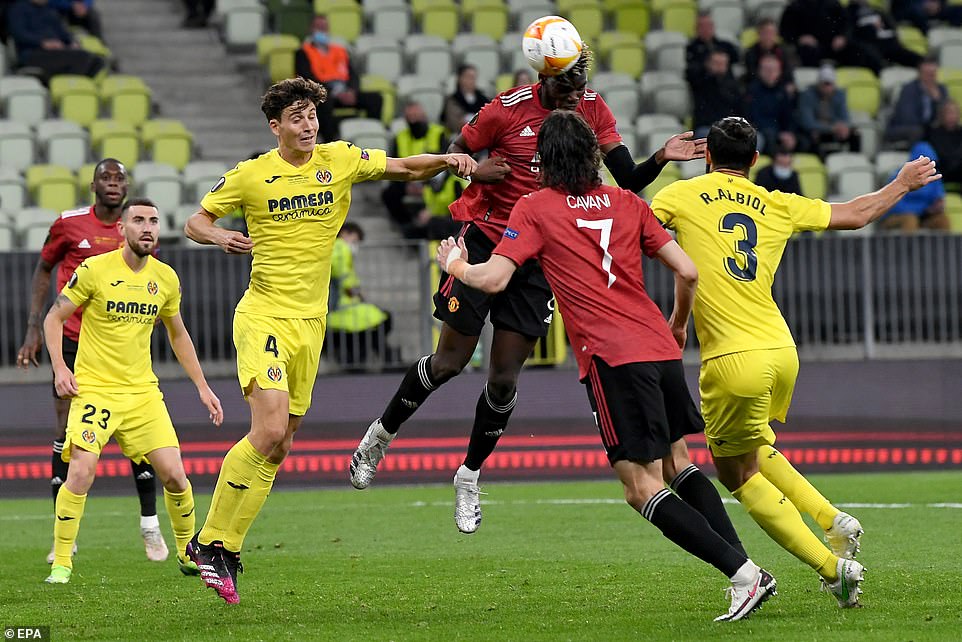