Kent villagers are helping feed stranded truck drivers lined up along the motorway by lowering bags of food to them from bridges.

They are using rope and shopping bags to deliver goods including beans, fruit and sweets to stranded lorry drivers waiting for Covid tests.

Hundreds of hauliers are lined on the M20 as part of Operation Stack waiting for a negative test result before they can make their way to the continent.

It comes after French president Emmanuel Macron ordered the border with the UK to shut on Saturday following the detection of a new virulent strain of coronavirus in Britain.

They have been joined by French firefighters in an attempt to clear a 6,000-strong backlog of lorries queuing up to cross the Channel.

People in Mersham, near Ashford, Kent have rallied round to help the hundreds of drivers as they wait.

Kind-hearted volunteers from the Kent village of Faversham also delivered essential items to the truckers still stranded at Marston airport, a disused airbase that has been turned into a temporary truck park for the stranded drivers. 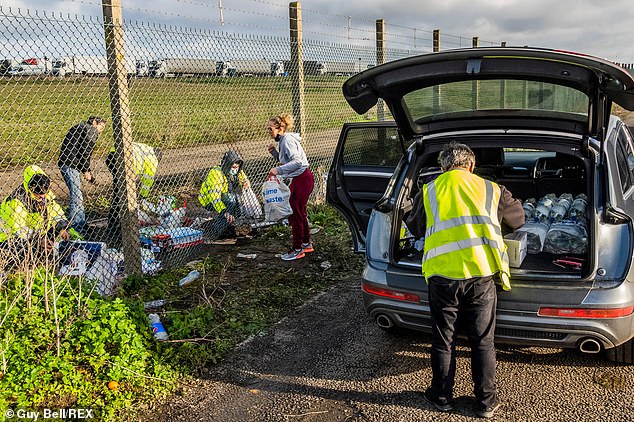 The volunteers delivered essential items like toilet roll and water bottles. Villagers from Mersham also delivered food to drivers on the motorway by lowering parcels from the motorway bridge 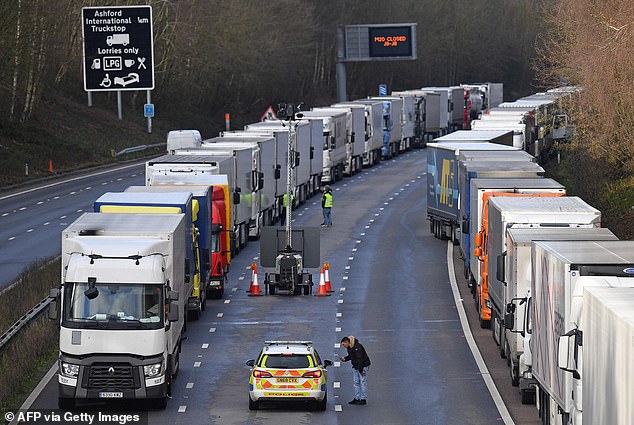 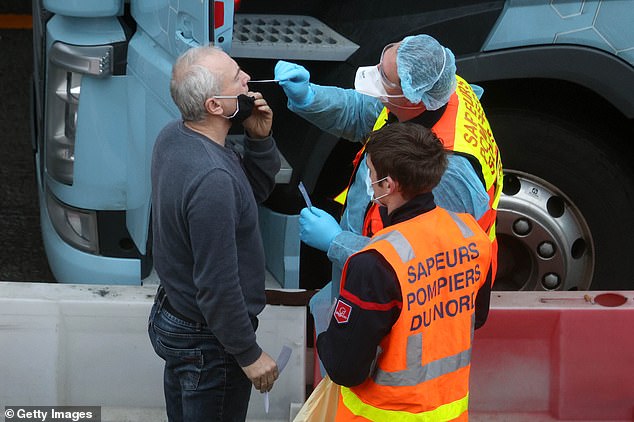 French firefighters (pictured) armed with 10,000 testing kits have joined the effort to get thousands of stranded lorry drivers across the Channel today, with up to 6,000 lorries now stacked up in Kent

Water bottles, toilet roll and snacks were among the essntial supplies passed to the waiting drivers through the airports perimeter fence.

Mersham residents Jan and David James also walked down the carriageway between ranks of parked up trucks to hand out food.

The pair climbed over a barrier walked down a set of steps on the embankment to reach the road.

Jackie and Peter Bates have also stepped in to spread Christmas cheer among the drivers.

Mrs James, 69, a former teacher told Kent Online: ‘We went round knocking on doors in Mersham asking if people had any spare food and they have been brilliant.

‘They gave us lots of food in bags and we then took it to the bridges.

‘We have had tins of beans, orange juice, fruit, biscuits, crisps and corn beef – anything the lorry drivers could eat with their fingers but I think most of them have cutlery anyway.

‘A lot of the drivers were asking us how far away Tesco was and many of them were walking to the supermarket.

‘We ran out of food in the end but we could have gone on and on – it was just something we felt we had to do for the poor blokes. 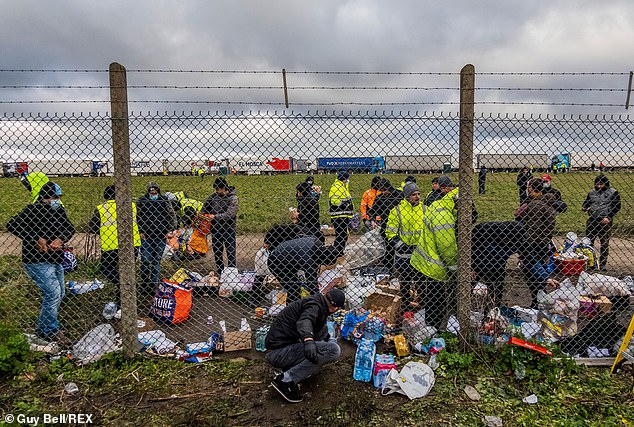 Drivers came to accept the donations at the perimiter fence at the disused Marston airport, which has been turned into a temporary truck stop since the French border closed 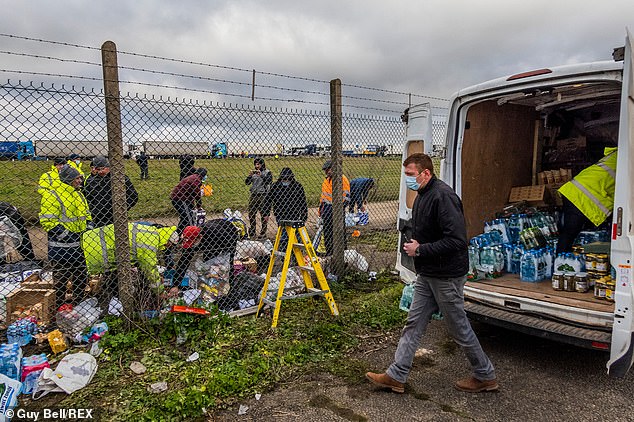 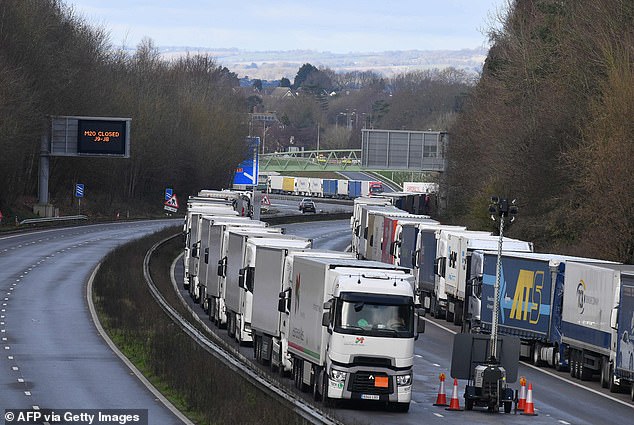 British testers attempting to clear a 6,000-strong backlog of lorries queuing up to cross into France have found just three Covid cases among the 2,364 drivers swabbed so far

‘When we went back up the steps onto the bridge, a whole group of them clapped us – it was quite emotional.’

Mrs James has lived in Mersham for 35 years and says residents regularly see drivers using the village as a rat-run to avoid queues on the A20.

The grandmother of five said: ‘There was a language barrier – all most of them could say was ‘very, very thank you’ but some of the French and Spanish I could pick up.

‘Many of them just smiled and put their hands together to say thank you – it was wonderful.’

Mrs James praised the community saying it was a ‘typical English village with a fantastic community spirit’.

She added: ‘The most important thing is that the drivers can get home to their families.’

The villagers actions have been part of a wider effort to feed the desperate drivers. 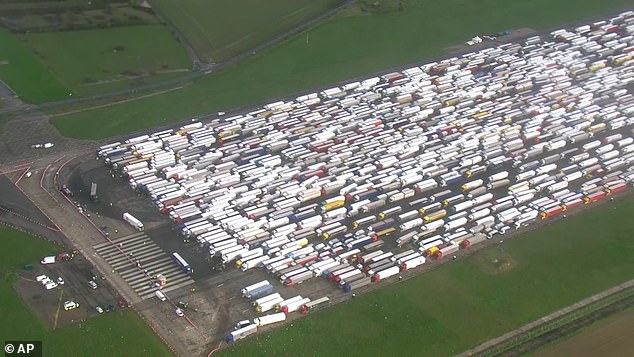 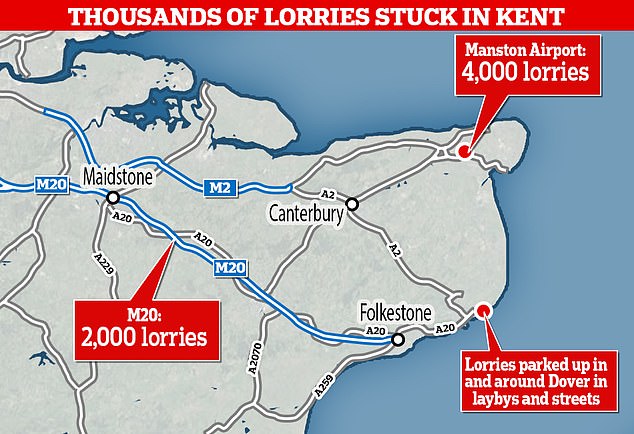 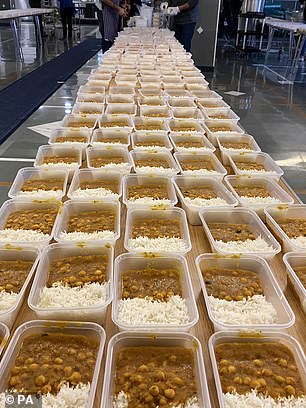 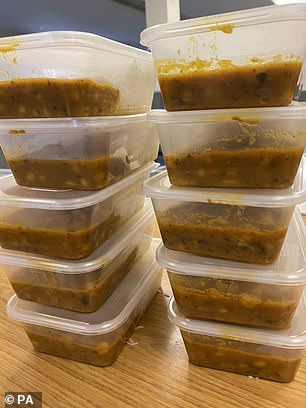 A group of Sikh volunteers have tried to the raise the spirits of lorry drivers stranded in Kent with a delivery of 1,000 Domino’s pizzas amid the ongoing border chaos.

Thousands of foreign drivers are likely to spend Christmas stuck in the UK as the Government has indicated queues will not move for at least another 24 hours.

Volunteers from Khalsa Aid coordinated the deliveries yesterday having already provided hundreds of chickpea curries to the stranded motorists a day earlier. 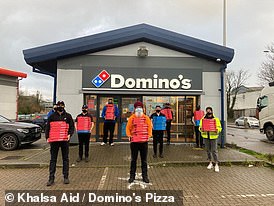 Sikh volunteers from Khalsa Aid and Domino’s Pizza workers stand outside the branch in Sittingbourne, Kent, in preparation to deliver the fresh pizzas to stranded lorry drivers

The volunteers from Maidenhead travelled over 80 miles to help out, while some of the group’s Langar Aid members journeyed more than 150 miles from Coventry.

Volunteers from the Guru Nanak Darbar temple in Gravesend cooked the meals, while staff from the Salvation Army’s South East Division were also helping to deliver food. Ramsgate Football Club was involved too, delivering 200 pizzas to the drivers.

Ravinder Singh, founder of Khalsa Aid which is based in Maidenhead, said: ‘We in Sikhism, we have the concept of langar, which means community kitchen.

‘We are British Sikhs and the least we can do is to practise our seasonal goodwill: two days from Christmas we have people on our soil who are homeward bound and do not know what is happening.’

A number of food donations from South East catering companies are also being transported by Network Rail to Ashford train station and distributed by KRF partner the Maritime and Coastguard Agency.

Several supermarkets and businesses, including Greggs, Lidl and the Imperial Hotel at Hythe have also made donations.

As part of KCC efforts to make sure people in the traffic management system Operation Brock are being cared for, a further 32 portable toilets have also been installed between junctions 10a and 11, adding to the portaloos provided on Monday at 1km intervals along this stretch of motorway. Toilets are being cleaned at 12-hour intervals..

While traffic queues will ease as drivers meet France’s COVID-19 testing requirements and are cleared for onward travel via either the Port of Dover or Channel tunnel, it remains important people avoid travelling to Kent while the disruption continues.

KCC Leader Roger Gough said: ‘The kindness and humanity shown by people who have rallied to provide welfare for those caught up in delays at the Port of Dover and Eurotunnel is amazing.

‘I would like to thank all those who are coming forward to help, including charities, businesses, voluntary groups and, of course, our own driver welfare teams.

‘The situation should now improve steadily as drivers secure negative COVID-19 test results and are able to continue their journeys into France by ferry or freight train. I have, however, deep sympathy for those for whom this will come too late to spend Christmas with their families.

‘I would also like to thank Kent communities for their support and understanding during what has been an extremely challenging time and hope the knowledge that the disruption will continue to ease is some welcome good news.’

It came after authorities faced criticism for the treatment of the stranded drivers and the conditons at Marston airfield.

Industry bosses branded the treatment of the stranded truckers ‘a disgrace’ earlier this week.

‘We need to ensure that drivers have got sufficient food and water.

‘Kent County Council were giving cereal bars yesterday morning which was not enough.

He added: ‘Bearing in mind the government has been trying to prepare for transition which is in eight days time, you would’ve expected these plans to be well rehearsed.

‘It’s an absolute disgrace that they’re not well prepared at all. It’s a scenario that could’ve happened in the case of no-deal.’