By Andrew Young For The Mail On Sunday

Villagers campaigning against sex parties at their old local pub have been accused of hate crimes.

The men-only gatherings have been held twice a month for nearly three years at the former Old Hall Inn in Sea Palling, Norfolk.

But protesters set up a Facebook page called the Sea Palling Action Group (SPAG) to publicise complaints about the party nights.

Pride protesters near the home of transgender woman Mary Carberry who has been allowing a club to hold men-only sex parties at her house,

Matters boiled over when members allegedly used transphobic language on Facebook while talking about Mary Carberry, who describes herself as a transgender woman and bought the 18th Century property seven years ago.

Andrew Livingstone, vice-chair of Great Yarmouth and Waveney Pride, said: ‘Mary was misgendered on Facebook by members of the SPAG who referred to her as “he”, called her “a fake woman” and made comments such as, “That man needs to understand.”

‘I spent five hours online trying to tell them how transphobic and offensive their language was, but they believe they have done nothing wrong.’

Yesterday about a dozen Pride supporters staged a protest to show their solidarity with Ms Carberry. It came after police were called earlier this month when locals protested outside the former pub when a party was going on.

A spokesman for Norfolk Lab described the group as a non-profit club, but confirmed that party guests at each event paid £15 each for running costs including snacks and tea and coffee.

The spokesman said most parties were attended by up to 17 men, although one had 35 party-goers. He added: ‘Things had all been pretty quiet until some people started taking pictures of cars [arriving at the parties]. Someone was deliberately walking a dog across the road to slow people down. Pictures of one guest who has an 82-year-old partner with Alzheimer’s were then posted online.’

Ms Carberry said: ‘My home is a nice safe place for the LGBT community. The parties are very discreet. I don’t need a licence because they are private parties which are not open to the public.’

But one local resident said: ‘The real issue is a sex establishment being run in a small family-oriented village. I don’t think many people especially with young families want such an establishment on their doorstep.’ 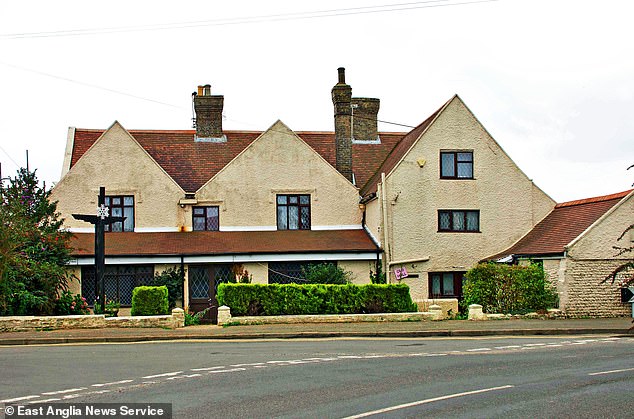 The men-only gatherings have been held twice a month for nearly three years at the former Old Hall Inn in Sea Palling, Norfolk

Harry Blathwayt, the local Lib Dem councillor for North Norfolk District Council, said he did not personally object to the parties, but he was ‘understanding of the concerns of many local people’.

He added: ‘People are concerned that the activities at the house might impinge on what they consider to be the natural order of things in a small Norfolk seaside village. There are a lot of families with children here.’

A Norfolk Police spokesman said: ‘Police proactively attended an address in Sea Palling on Saturday evening, September 4, to prevent a potential breach of the peace. There has been increased community tension in recent weeks relating to events being held at the address.’

The spokesman said officers had spoken to all parties involved and were continuing to work with them to resolve matters.