The partner of Australia’s Deputy Prime Minister has revealed how their young son nearly drowned at a community park, and how she fears the toddler could have been ‘enticed’ away from his mother after a comment by a strange man.

Vikki Campion, who shares two sons with Federal MP for New England Barnaby Joyce, said on Sunday she lost sight of their youngest, two-year-old Tom, at Curtis Park in Armidale over the festive break.

She said ‘time stopped’ when their son disappeared as she feared he could join a long list of missing Australian children, with the names ‘Daniel Morcombe’ and ‘William Tyrrell’ racing through her head.

Miraculously, an unknown woman who helped join a frantic search spotted the toddler in a creek and pulled him out, leaving Ms Campion shaken.

But it was the next interaction which left her reeling for days, a strange man who soon approached her and said: ‘It doesn’t take much to get them to go’.

‘It didn’t sound sinister until I tucked Tom into dinosaur sheets that night, that could have remained empty, Ms Campion said.

‘Did Thomas leave this park he had begged to go to of his own volition or was he enticed?’

Writing in the Saturday Telegraph, she explained how she suddenly realised her son was not the boy at the top of a crowded slide, but another boy wearing the same top.

She described how after calling out his name and getting no response, she frantically scanned the nearby road looking for his bright green dinosaur t-shirt, her stomach in knots.

In one terrifying moment he had vanished and thoughts began to race through her head of what could have happened to him.

She said they began to split up and search the park – enlisting the help of some locals, other mothers and grandmothers who had never met Tom but could sense a fellow parent’s panic all too well.

And then one of the mothers who was not a local but a visitor found the boy in Armidale Dumaresq Creek, which cuts through Curtis Park, and pulled him out from the water.

In that same creek where a three-year-old girl from a Bangladeshi family had drowned in 2016 after wandering off.

A 2018 coronial inquiry advised the playground be fenced off – with a council investigation also finding the steep drop from the riverbank was a danger.

Instead of the fence, a new $1million playground was built next to the old one – which was also not fenced off. 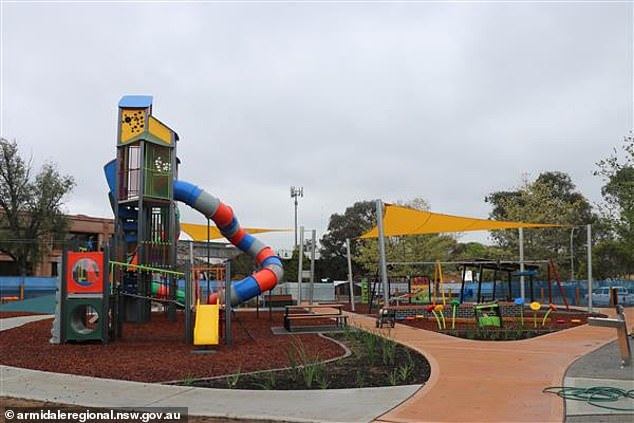 Instead the council chose to reduce the water depth and velocity of the creek along with grading the steep drops though civil works – with the waterway still easily accessible by small children, Ms Campion said.

Ms Campion explained how 42 people have drowned in Australia this summer so far, half of whom were children.

‘I didn’t get your name amid chaos and tears, but to the mum who was “not from here”, you stopped my toddler from becoming number 43… thank you,’ Ms Campion said.

She added that after the unassuming hero left she was closely watching Tom like a hawk on the play equipment when a man with no children approached her.

When another lady said how scary it would have been for Ms Campion and that she too would have immediately raised the alarm, the man laughed, saying the phrase that later drew shivers down her spine. 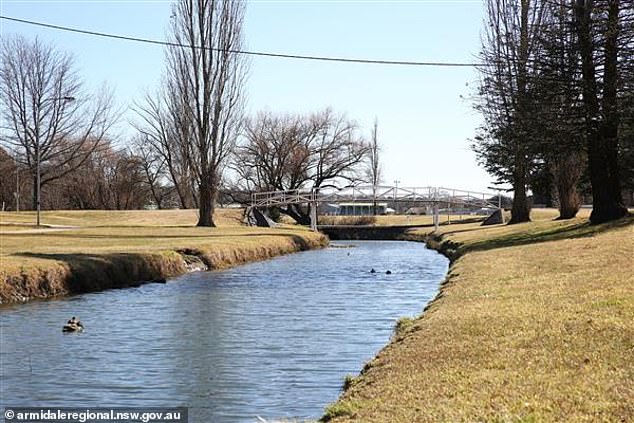 She added she would likely not have any definite answers about the unsettling encounter but that she was just grateful to have her boy back.

Her partner Mr Joyce narrowly made it back to Australia just before Christmas after catching Covid on a work trip to Washington DC.

After testing positive for the Omicron strain on December 7 all his meetings in the US were cancelled and he spent the next 14 days holed up in a hotel room.

Mr Joyce said he suffered tiredness and some aching in his legs during the first days of his illness but has felt fine since.

‘I got Omicron despite being double vaccinated, but really it was pretty mild,’ he told Sunrise.

‘I will be home for Christmas and I sum up the trip as could’ve been better. Obviously arriving here and being locked up in a hotel is not the ideal venue for trying to meet people.’

He described having the virus as like a mild flu.

‘It was a couple of days and then the rest of the time I had the virus, they could find the virus on me, but I didn’t feel sick and that’s one of the frustrations.

‘I thought I’ve got to do something positive, I’ve turned into a fat s**t so I’ve been exercising, eating less and drinking very little,’ he said.

He was finally given the all-clear to fly back just days before Christmas and was able to spend the holidays with Ms Campion, their four-year-old Sebastian, and Tom.