The refugee who defeated Kristina Keneally in a battler seat has choked up when recalling how she almost drowned fleeing Vietnam.

Dai Le won the seat of Fowler in southwest Sydney on May 21 over the former NSW premier Labor tried to parachute in from her rich island enclave 70km away.

The independent MP took a swipe at Ms Keneally in her maiden speech to parliament on Monday, and also compared Covid lockdowns to the tyrannical regime she fled as a child.

Ms Le donned traditional Vietnamese clothing printed with a with an Australian flag as dozens of supporters cheered her from the House of Representatives gallery.

She recounted how she escaped the Fall of Saigon in April 1975, aged seven, on a rickety boat to Hong Kong with her mother and two younger sisters.

Her father, a lawyer working for the Americans, didn’t make it on to the boat and she never saw him again.

‘I remember running with my mother and two younger sisters, scrambling to make our way on to a boat and pushing through the cries and screams of women and children. I had no idea what was happening,’ she said.

‘All I can recall are the cries, the panic, the chaos and one moment on the boat when I turned around to look back at my birth country to try to comprehend what was happening and just saw big, black smoke in the distance.

‘I remember the moment I thought we would die when a big storm hit our boat.’

Ms Le’s voice cracked as she recalled holding on to the boat for dear life with her sister as the boat rocked and her mother held my other sister tightly in her arms.

‘I remember being soaking wet lying under the tarp as the ocean hit us and the rain poured down,’ she said.

‘I remember how my face almost hit the ocean as our boat rocked so hard from the storm and I remember my mother warning that I had to hold on to my sister and a plastic canister, just in case the boat tipped over, until we could find one another.

‘Trying to peer through the tarp, all I could hear was the storm and [I] was terrified we wouldn’t survive as none of us could swim.

‘My mother kept praying, prayer beads in hand, as the boat continued to rock. The ocean was pitch dark, and all that I could think of was that I was going to fall into this black abyss.

‘The storm subsided the next morning, but everyone was exhausted. I remember seeing bodies lying on the boat like corpses.

‘I remember the years in refugee camps, dreaming of being able to lie on a proper bed. To have a proper home, and to go to a proper school.’

Ms Le choked up again, this time with joy and gratitude, as she spoke of how Australians welcomed her family.

‘I remember the moment when we were accepted to be resettled as refugees in Australia, known to many in refugee camps as the island with the best education system in the world and remembering as we stepped out of [Sydney Airport] the feeling of acceptance and gratitude,’ she said.

‘We were filled with hope as we looked out onto the horizon of endless possibilities.

‘Australia, you welcomed my mother, my family with open arms. You gave us comfort, food, and a warm bed to sleep in.’ 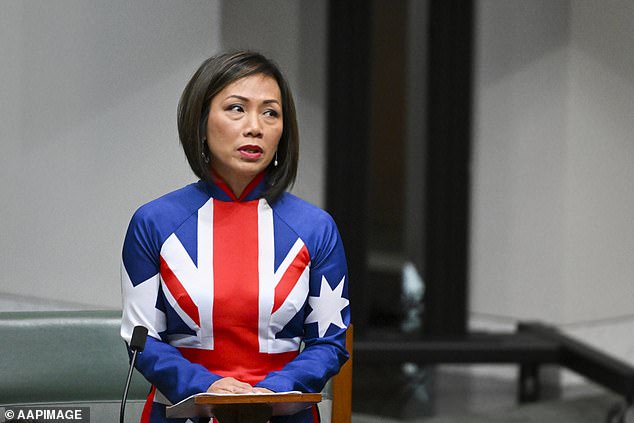 Ms Le thanked Neil and Kylie Williamson, who helped her family integrate and were in the gallery for her speech, and a friend who introduced her to Anzac biscuits and made her feel like she belonged.

Her mother worked cleaning houses, starting with that of an Italian migrant who built a shoe business.

But as grateful as Ms Le was for how Australians supported her family, she had harsh words for the NSW Covid lockdown last year that was particularly harsh in her area.

She compared the restrictions put on western Sydney, which were controversially stronger and more heavily police than the rest of the city, to the communist dictatorship her family fled.

‘We weren’t allowed to travel more than a 5km radius from our homes, we were told to get travel permits, we were forced to get tested every three days, we had helicopters flying around our area as well as police on horseback and men in uniform knocking on people’s doors,’ she said.

‘While the intention was good, we are a city made of people who have fled tyrannical regimes and warzones, like my own family and my own home country.

‘The last time I looked, a government that takes away individual’s liberty to choose how they want to live, work, and raise families was called a communist dictatorship – a political system that my family and I escaped from.’

Ms Le, who Entered local politics over a car park in Cabramatta when she was an ABC reporter, was elected as an independent in the Labor heartland area over backlash to Ms Keneally being selected to contest the seat over local candidates. 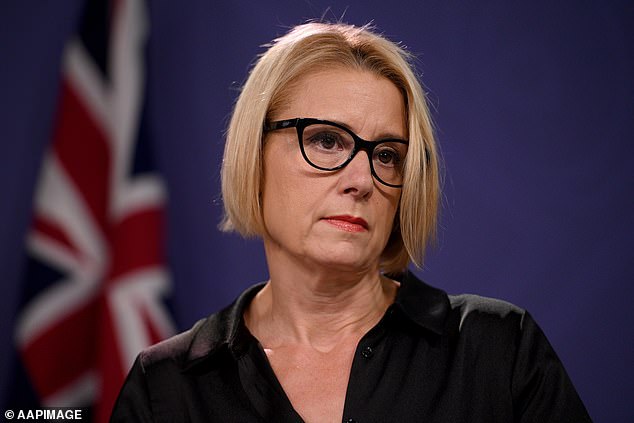 The former senator was picked by Labor HQ despite living 70km away on the wealthy Scotland Island on the northern beaches, renting a house she ditched days after the election loss.

Voters rejected her so badly that the seat swung from a 28 per cent Labor majority in 2019 to five per cent in favour of Ms Le.

‘We believed that it was time for one of us with lived experience, who had grown up, who works lives and spent most of our lives in that community fighting and standing up for us to represent us,’ Ms Le said in her speech.

‘Especially over the past couple of years during Covid and lockdown conversations started amongst a small team. Could we sit back and let our community be taken for granted again?’

‘The people Fowler wanted and needed a representative who came from their community and would never forget the personal challenges that they face every day and have walked in our shoes and had been through what they had been through.

‘Not just at election time, but every day.’

Ms Le said this was needed as her electorate had been ‘neglected and abandoned by the major parties’ and despite their resilience ‘we are not a privileged people’.

She pointed out that Fowler had the third highest unemployment in Australia at almost 10 per cent, three times the national average, and a 20 per cent lower median income.

Forty two per cent of resident are renters, compared to the 32.6 per cent NSW average.

Ms Le said Fowler was also one of Australia’s most multicultural electorates, but there was not enough support for new arrivals. 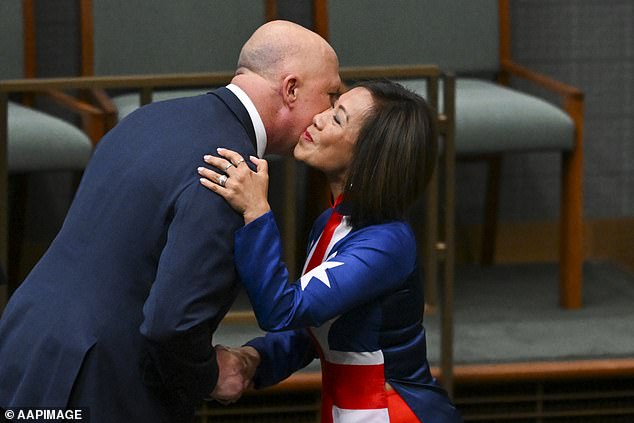 She encouraged the government to first fix skills shortages with people already in the country, given her electorate’s unemployment rate.

‘If we have to bring in more migrants, the government has a duty to ensure that there are immediate plans to build more housing, more public transport infrastructure, more local services for this planned increase,’ she said.

‘Our community has seen the settlement of almost 10,000 refugees with no additional spots for hospitals, schools, waste services, roads maintenance… or job opportunities.’

Ms Le said if immigrants were resettled without needed services, they would be left to ‘to fend for themselves in a foreign country,… feeling marginalised and demonised’.

A huge crowd in the gallery gave her a standing ovation, including many of Vietnamese heritage in traditional dress, while chanting her name.

A long line of MPs including Opposition Leader Peter Dutton and Prime Minister Anthony Albanese formed to congratulate her.