This is the moment thrilled zookeepers watched as a rare baby rhino was born at a safari park in England – the second such birth in just over six weeks.

Astonishing footage shows Keyah pacing around her enclosure as the calf emerges, still in its birth sac.

As she spins, her newborn is safely delivered onto the straw bedding. Keyah then approaches and gently nudges her calf into motion.

Later in the CCTV clip, the newborn tries getting to its feet as Keyah nestles close to her offspring.

The calf, whose name will begin with the letter J like all animals born this year, is the second white rhino newborn to arrive at the safari park in Bewdley, Worcestershire in the space of a few weeks. 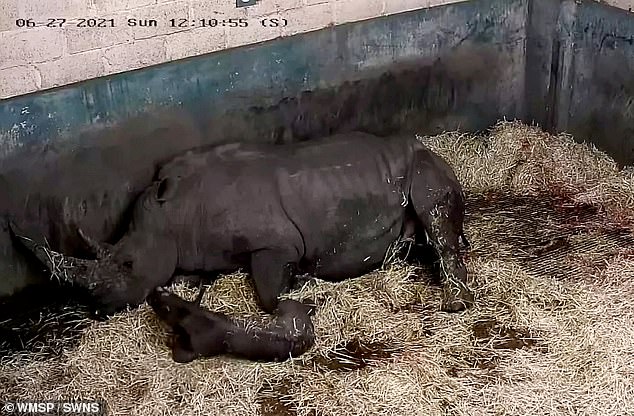 Later in the CCTV clip, the newborn tries getting to its feet as Keyah provides a watchful eye 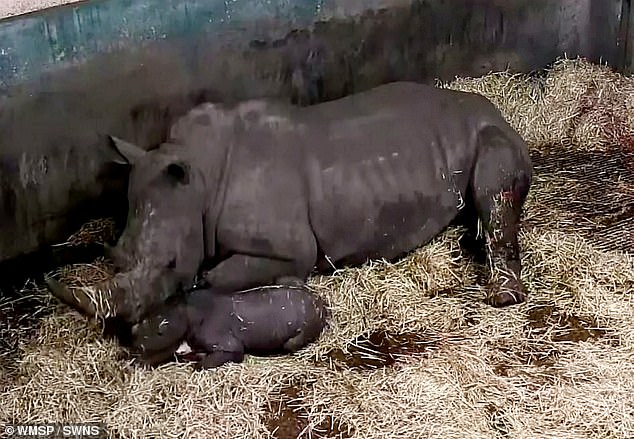 Proud dad Barney has now fathered five rhinos at the park and keepers hope the 15-year-old will go on to have many more offspring as part of a breeding programme.

Head of Wildlife, Angela Potter, said, ‘We are delighted to welcome another new calf to our crash of southern white rhino.

‘It’s wonderful to see Keyah settling into motherhood so well, and she’s certainly going to be kept busy as her boy finds his feet.

‘Celebrating another rhino birth here at the Park is a fantastic achievement, and further showcases the important role we have to play in being a part of the European Endangered Species Programme. 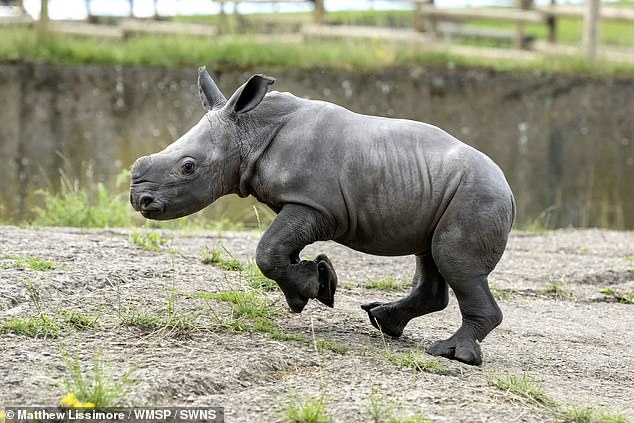 The calf’s new name will be decided by the public this week. He became the second white rhino calf to be born at the park in six weeks

‘Raising awareness of the vital conservation efforts needed to protect all five species of rhino in the wild, will always be the driving force behind our work here.

‘It’s also the first time we have had two calves born so closely together, so we can’t wait to watch them grow up as a pair, likely causing all sorts of mischief out on the Safari.’

The park’s breeding programme has been a roaring success, with this being the fifth rhino to be born at the park in five years.

Rhinos are a common target of poachers who hunt them for their ivory tusks, with uncontrolled poaching during the colonial era considered to be the major factor in the decline of white rhinos.

The animals make easy targets for poachers due to their size, poor eyesight and tendency to travel in herds.

The white rhino: A conservation success?

The white rhino, also known as the square-lipped rhino, are listed as Near Threatened on the IUCN Red List mainly due to the poaching crisis and ivory trade.

As a whole, the white rhino is considered to be a major conservation success story, having been brought back from the very brink of extinction.

But there are two genetically different subspecies that exist in different regions of Africa – the northern and southern.

Southern White Rhinos were thought to be extinct in the early-19th century but in 1895 a small population of less than 100 was discovered.

After more than a century of protection and management, they are now classified as ‘Near Threatened’ with between 19,600 – 21,000 of them thought to exist in protected areas.

However, by contrast, the Northern White Rhino is still described as ‘Critically Endangered’ and intensive conservation efforts are underway to tackle the crisis.