The radical Melbourne Victory supporter group which previously apologised for its role in the violent A-League pitch invasion in December has now announced its refusal to disband.

Original Style Melbourne (OSM) is a fanatical group formed after the North Terrace disbanded in 2016 – and several unruly fans burst onto the field during the Melbourne derby displaying their t-shirts.

Previously OSM issued two public apologies including a statement saying: ‘We strongly condemn the actions of a minority of active fans at the derby’.

‘Our protest [against the sale of the A-League grand final to Sydney until 2025] was intended to unite all fans.’

Now, the group has issued a fresh statement saying it will not disband.

It comes despite the A-League club being fined a record $550,000 recently following the violent pitch invasion during the Melbourne derby last month at AAMI Park, which was suspended due to safety concerns.

‘Our group was formed independently and only we control our future.

‘The current restrictions on support are nothing the terrace hasn’t dealt with and overcome before.

‘As long as fans are allowed inside the stadium, we will be there and our voice will be heard. 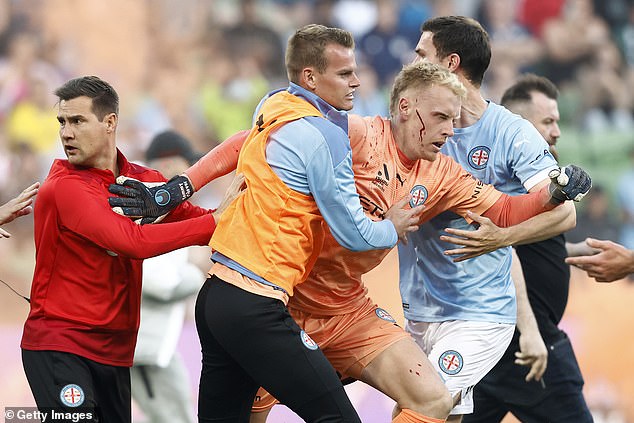 ‘To our supporters and friends, we thank you for your loyalty. To those wishing for our demise, make no mistake, we will always be there! The terrace will live on, it always does.

‘Love us or hate us, we are forever Melbourne!’

The development wasn’t well received online, with a number of genuine football fans bluntly telling OSM they should walk away from Victory games permanently.

‘You are irrelevant now lads. Most of the photos published in the media of persons of interest were wearing your shirts, not Victory merchandise,’ one wrote.

‘You didn’t walk when you said you would and [you] lost everyone’s respect.  The club and its supporters are the laughing stock of the league and football fans in general because of YOU. Pack up your crayons and go home.’ 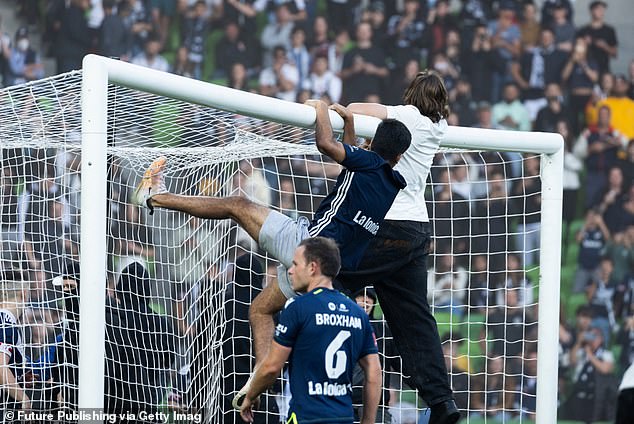 After issuing a record fine of $550,000 to Victory, Football Australia boss James Johnson labelled the scenes at AAMI Park as ‘the worst witnessed in Australian football during the A-League era’

Another was equally scathing, declaring: ‘You are not Melbourne, your voice represents no one and the north end [at AAMI Park] will [now] be filled with legitimate active support.

‘There’s no coming back from this – the club won’t work with you again. Understand it and move on.’

After slapping Victory with a record fine, Football Australia boss James Johnson labelled the scenes at AAMI Park as ‘the worst witnessed in Australian football during the A-League era.’

‘These sanctions are reflective of our desire to remove this behaviour, and those that perpetuate it, from our game,’ he said.

‘The field of play is sacred and the safety of our players and match officials is paramount.

‘Those individuals that illegally entered the field of play, caused damage, and verbally and physically assaulted players and officials, crossed the line. 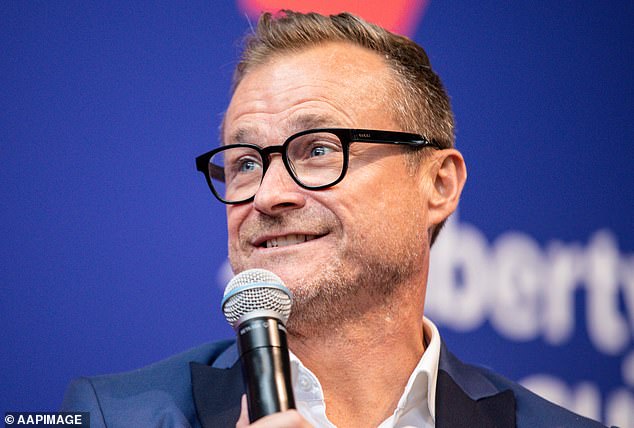 ‘We have worked closely with Victoria Police to identify these individuals and will continue to do so to ensure those that display antisocial and criminal behaviour at football events are not involved in our game in any way.

‘The sanctions imposed on Melbourne Victory are a necessary step to ensure we create an environment where we place football first, and our community can enjoy matches.’

The imposed sanctions require Melbourne Victory to block access to select seating behind the goals – the area OSM usually occupies – and restrict seating in the north end of AAMI Park to registered club members for the rest of the 2022-23 season.

A suspended ten point deduction will also be triggered for any instance of serious supporter misconduct during this season and the next three seasons, ending at the conclusion of the 2025-26 A-League Men’s season.

Tension was high at the Melbourne derby after Australian Professional Leagues CEO Danny Townsend announced days earlier the next three A-League men and women’s grand finals will be played in Sydney.

It followed a reported $10million deal struck with Destination NSW – and left scores of fans fuming across the nation.

Numerous protests followed, but the derby scenes in Melbourne were another level on what was a dark day for the sport on Australian shores.