This is the first time the state had more than 500 new cases in a day since the height of its deadly second wave on August 4 last year.

The 366 mystery cases not linked to the rest of the outbreak are also the most this year, with chief health officer Brett Sutton warning the risk of 1,000 a day is ‘very real’.

They were diagnosed from 61,961 tests and 41,758 vaccine doses were administered on Wednesday as Victoria approaches 70 per cent first dose coverage.

Despite the case surge, a range of harsh restrictions are set to be eased, allowing millions cooped up inside their homes more time outdoors.

Even if the changes are only small, as expected, it will be welcome relief to Melburnians who have spent two more days in lockdown than any other city in the world since the pandemic began.

Beleaguered Melburnians trapped in their sixth Covid lockdown will finally get some much-need relief, and even the hated curfew may be coming to an end (pictured, Melburnians walk the eerily empty city under lockdown)

The Victorian premier is poised to give long-suffering residents more freedoms after 70 per cent of the state have received their first vaccine dose, which is expected to come on Thursday.

He is tipped to announce the 5km travel limit will be extended to 10km with the draconian essential exercise limit increased to three hours, up from two, but it’s not clear when the changes will be implemented.

The city’s despised nighttime curfew could also finally be abolished after the state cabinet met with health officials for late-night talks on Wednesday, with some advocating for the hated measure – which has no health benefit – to end.

The welcome freedoms come as the regional town of Ballarat wakes up to a seven-day snap lockdown of its own after four new Covid cases were discovered in the area.

What lockdown changes could be announced on Thursday?

• Melbourne’s dreaded 9pm-5am curfew could come to an end

• Personal trainers could be permitted to work with two clients outdoors

• Essential workers will be able to use childminders

• Construction sites will be able to ramp up capacity to 50 per cent once 90 per cent of workers receive their first dose.

Meanwhile Shepparton has come out of lockdown, with its restrictions mirroring the rest of the regions since midnight on Wednesday after a local outbreak was brought under control.

Chief Health Officer Brett Sutton said the Ballarat decision was made after Covid sewage surveillance indicated the virus may have been circulating within the community for up to a week.

Back in Melbourne, the Andrews government discussed calls from the Victorian opposition to bring in ‘social bubbles’ that would allow up to five people to gather for two hours for exercise and recreation such as picnics, as is the rule in the ACT.

At about the same time last year, in the wake of Victoria’s disastrous second wave, restrictions were eased to allow 10 people from two households to meet-up outdoors.

With the AFL Grand Final just over a week away, some hope the sacred occasion may entice Premier Andrews to further ease the burden on cooped up Melburnians who’ve spent 229 days over the past 19 months living under stay-at-home orders. 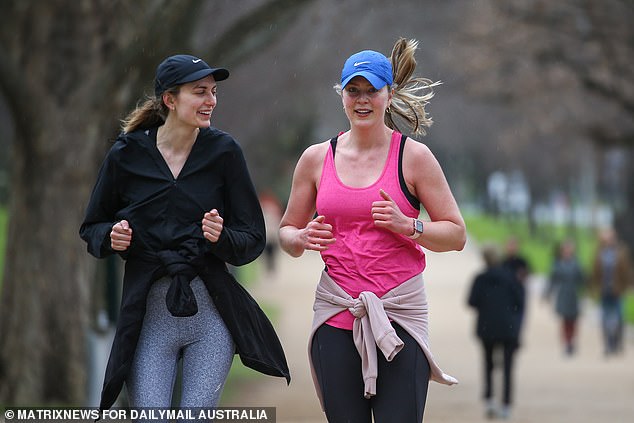 The draconian limit on exercise is set to increase from two hours to three hours under plans set to be announced by Victorian Premier Daniel Andrews (pictured, women exercise in Melbourne’s lockdown) 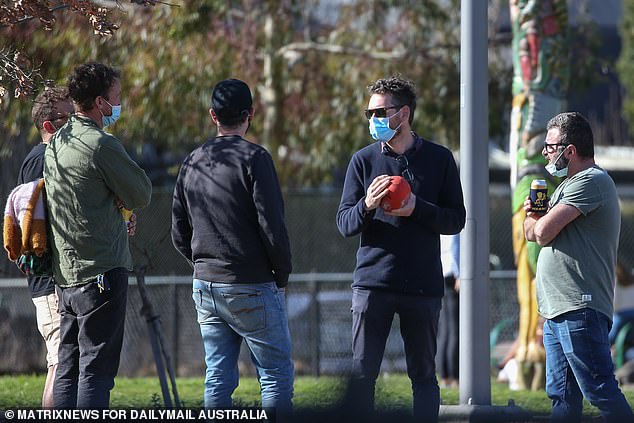 Daniel Andrews is set to reward long-suffering Victorians with a few minor freedoms when 70 per cent of the state have received their first vaccine dose, which is expected to come on Thursday (pictured, Carlton in Melbourne during lockdown)

By Wednesday, 68.3 per cent of Victorians aged 16 and over had had one dose of a Covid vaccine, with 41.9 per cent being fully-vaccinated.

‘We need to give people a break from relentless lockdowns,’ Liberal opposition leader Matthew Guy told the Herald Sun.

‘We need to find more ways to allow people to get exercise and limited social contact. With so many people doing it really tough, it’s vital for their mental and physical health.’

Although Mr Andrews has acknowledged a slight easing of restrictions would be introduced when the 70 per cent single dose marker was reached, the premier has remained tight-lipped about the details.

The Labor leader has also flagged a full roadmap out of lockdown will be announced on Sunday, outlining next month’s reopening strategy.

‘I’m not overselling this. Its modest, the notion of extra and extra distance,’ Mr Andrews said. 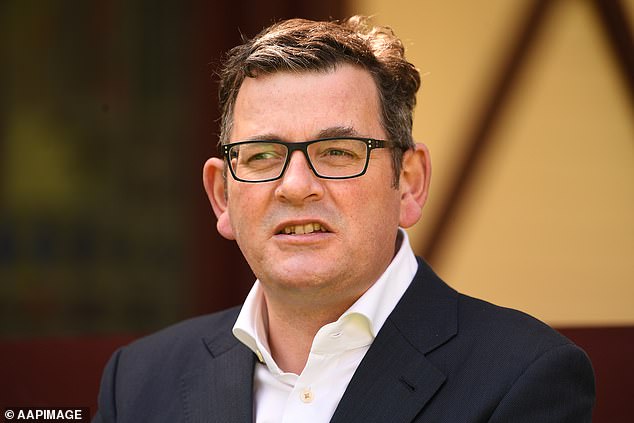 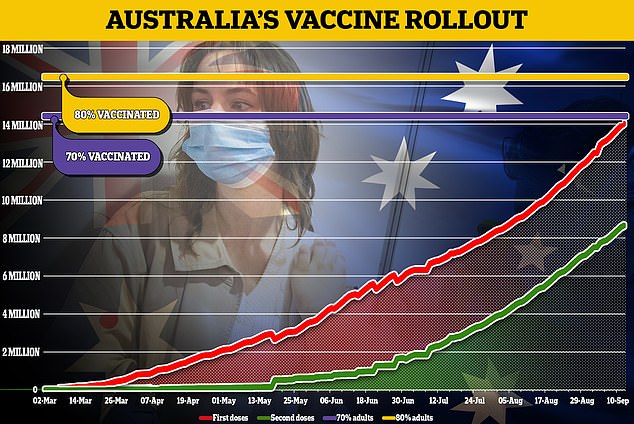 ‘If we can go further than that with some social interactions as well, we will get those announcements made as soon as possible.

‘It may well be though that if we roll all this together in the road map on Sunday, then we can do more because we’ve settled on the full context.

‘That would be the only reason we would wait a little while longer, it would only be a day or so.’

While the impressive vaccination rates in both states line the path to freedom and a return to post-Covid normality, virus case numbers are still high and threaten to derail any potential easing of restrictions.

NSW had its deadliest day of the pandemic with 12 more fatalities on Wednesday and a further 1250 cases.

On the other side of the Murray River, Victoria racked up 423 new infections and another two more deaths. 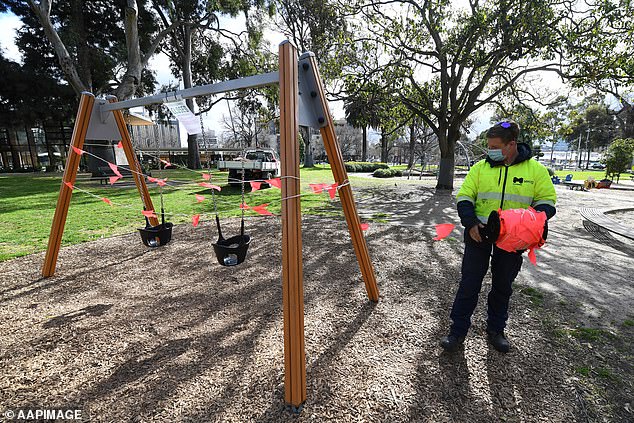 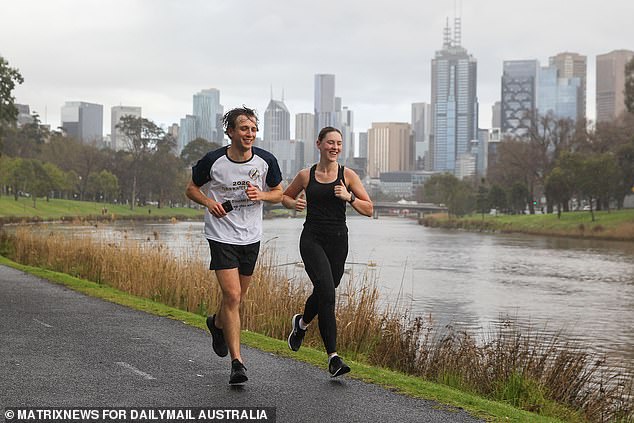 Although Mr Andrews has acknowledged a slight easing of restrictions would be introduced when the 70 per cent single dose marker was reached, the premier has remained tight-lipped about the details. Pictured: Locked down Melbourne residents run by the Yarra River

The calls to ease lockdown restrictions come as the Victorian Chamber of Commerce and Business NSW lobbied their respective governments to install a ‘border bubble’ between both states as soon as 70 per cent double-dose rates are eclipsed next month.

The powerful business groups say flights to other states and overseas should continue when 80 per cent coverage is achieved, but it would be advantageous for NSW and Victorian business to get a jump start.

Borders between the two states were slammed shut two months ago on July 9 when Victoria declared NSW a Covid hotspot as Bondi’s Delta cluster began to spiral out of control. 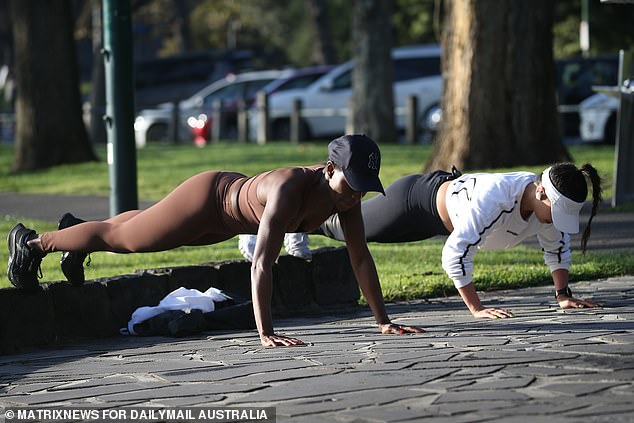 Essential exercise time will increased to three hours – up from two. Pictured: Melburnians workout by the Yarra River 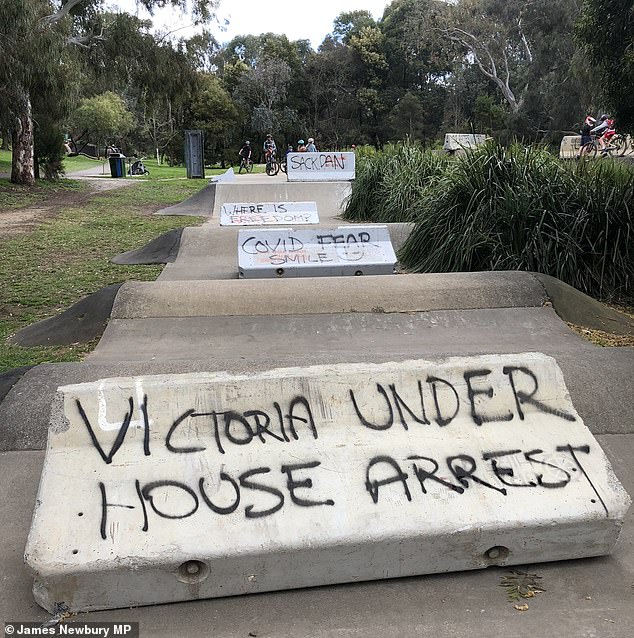 ‘Our businesses in NSW and Victoria need clarity on when they can resume their strong economic and socio-economic connection,’ he told The Australian.

‘Business needs certainty so they can re-employ staff and re-engage with their customer base.

‘We need to be able to say to NSW and Victoria, ‘at 80 per cent double dose, our businesses will be open, our state borders will be open and you can plan your Christmas holiday, catch up with family or attend that conference without fear of it being ­cancelled’.’

His counterpart, VCCI chief executive Paul Guerra, is also desperate to get one of the world’s busiest air corridors up and running again.

‘Our governments must facilitate a return to that collaboration to get our nation’s business heart pumping once again,’ he said. 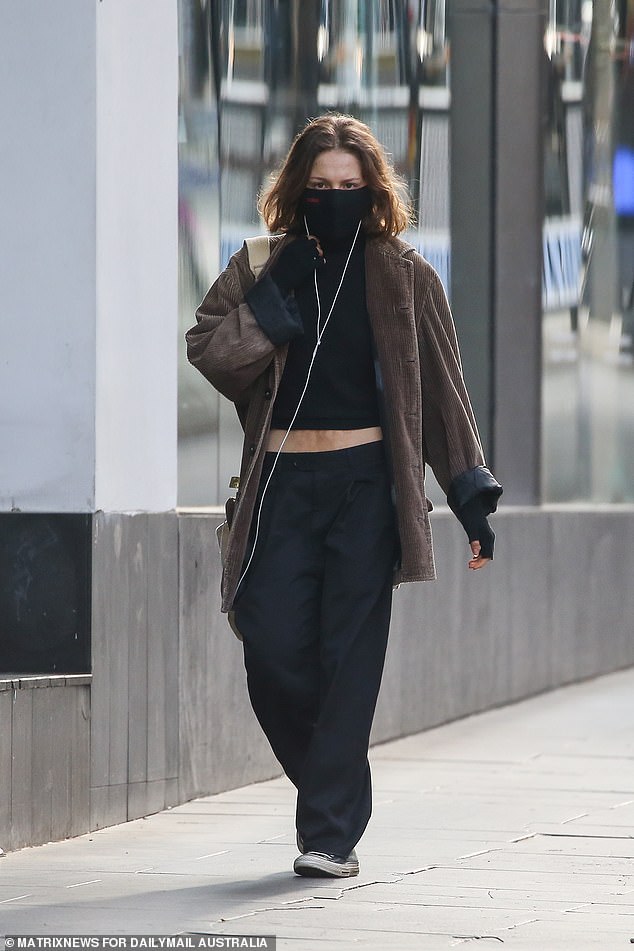 With the AFL Grand Final just over a week away some hope the sacred occasion may entice Premier Andrews to ease the burden on cooped up Melburnians (pictured, a local in Melbourne during lockdown) 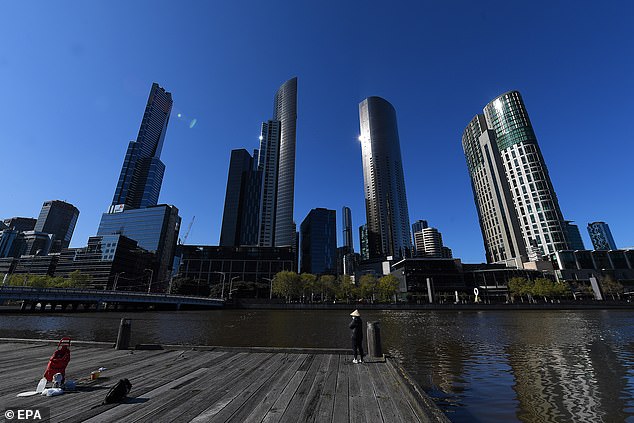 While the impressive vaccination rates in both states line the path to freedom and a return to post-Covid normality, virus case numbers are still high and threaten to derail any potential easing of restrictions (pictured, Melbourne under lockdown)

The push comes ahead of fears an anti-lockdown protest planned for this weekend could become a super spreader event.

A public transport ban will be in place and massive fines issued in an attempt to stop the crowds from storming Melbourne’s CBD.

Parts of Victoria’s transit network will shut from 8am to 2pm on Saturday to prevent thousands from gathering for a planned protest against the state’s Covid lockdown restrictions.

Chief Commissioner Shane Patton said police would be patrolling trains to ensure commuters had legitimate reasons to disembark with a $5,500 fine for anyone caught unlawfully entering Melbourne CBD.

More than 2,000 officers will be on hand with 20 police stations to be closed to the public as law enforcement are pulled away to assist in the major operation. 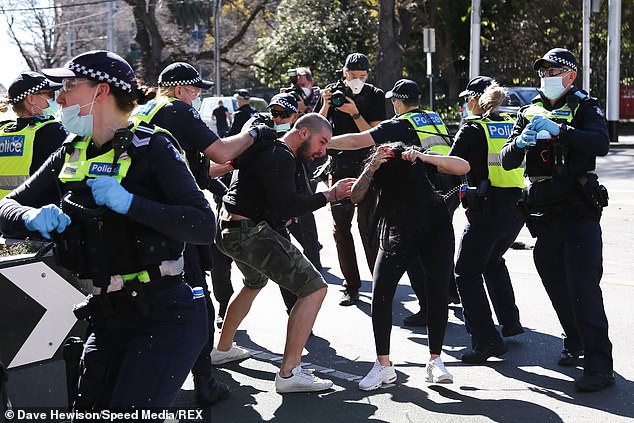 Public transport will be temporarily shut for six hours to thwart protesters planning to attend another anti-lockdown rally in Melbourne’s CBD this Saturday (pictured, police clash with protestors at a ‘freedom rally’ in August)

‘We realise people are fatigued and this is a significant step for us. We didn’t take this lightly but given the circumstances and where we are with Covid, we cannot afford to allow transmission to occur,’ he said.

Trams will cease operation entirely, while buses will bypass the city and trains will be barred completely from entering the CBD between the hours of 8am and 2pm.

A hard border surrounding the CBD will be established with barricades, traffic blocks and an increased police presence to block protesters from unlawfully gathering.

Essential workers who are required to travel that day will still be able to enter the city but will need to carry their workers permit on them to gain access. 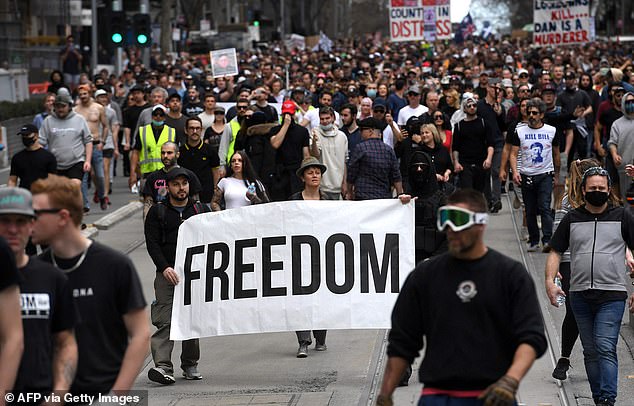