An abandoned farmhouse sits frozen in time from the moment a family decided to leave sometime in the late 1960s.

A thick layer of dust covers a stack of suitcases and an old broad-rimmed hat found in the front room of the old farmhouse somewhere in the countryside in Victoria, Australia.

Photographer Steve Chaz stumbled upon the remote home – which is away from any main roads and towns – and took the striking images from inside while on a camping trip with friends on December 6.

‘The house was  probably built in the early 1900s, definitely occupied in the 1930s and 40s given there were newspapers from these years inside the house,’ he told Daily Mail Australia. 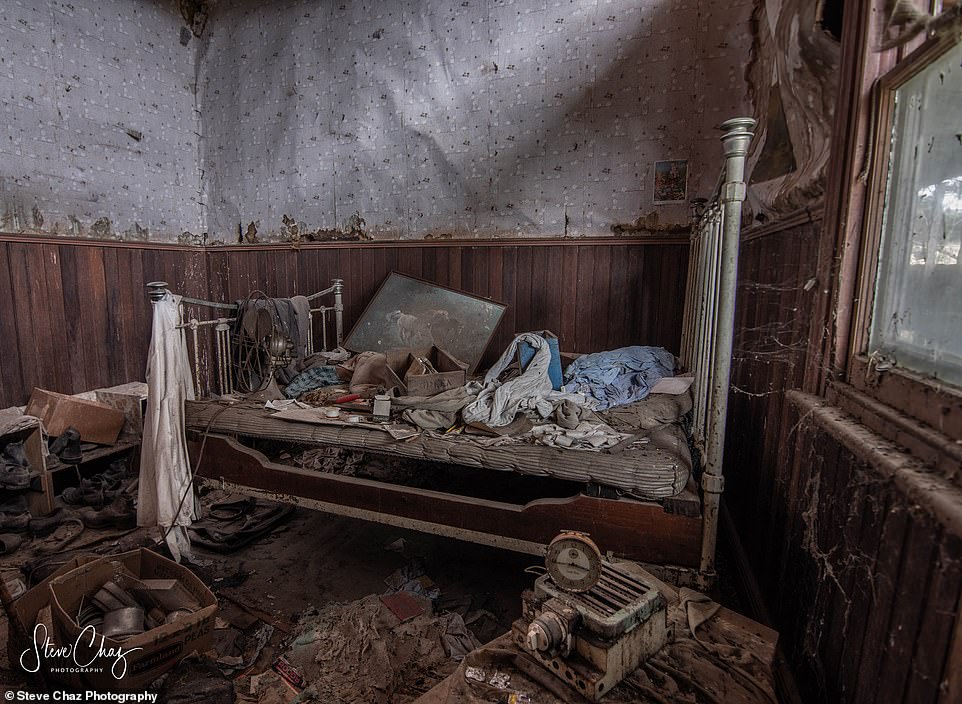 Mr Chaz said he and his friends often find derelict houses but said this one was special as it had been left without vandalism or theft.

That is why Mr Chaz will not disclose its location.

‘When I photograph a place like this, I always give my word I wont reveal where it is, my reputation as a photographer stands on this,’ he said.

‘It’s in a remote location far away from roads which is why it has remained as it is without vandalism or theft.

‘Very early types of appliances like stoves and electric heaters as well as calendars in the home would suggest it was lived in until the late 1960s – and then abandoned,’ the photographer said.

From the outside the house didn’t look like much, with Mr Chaz describing it as a ‘semi-intact farmhouse in a fragile state of decay’.

‘There are rotting floorboards, collapsed verandas, uneven floors and walls. One day it will collapse and succumb completely to the elements,’ he said.

‘There is no saving it at this stage, it’s deterioration is too severe to attempt a restoration.’

Mr Chaz and his friends went inside because the door was open and found a ‘treasure trove of old knickknacks’. 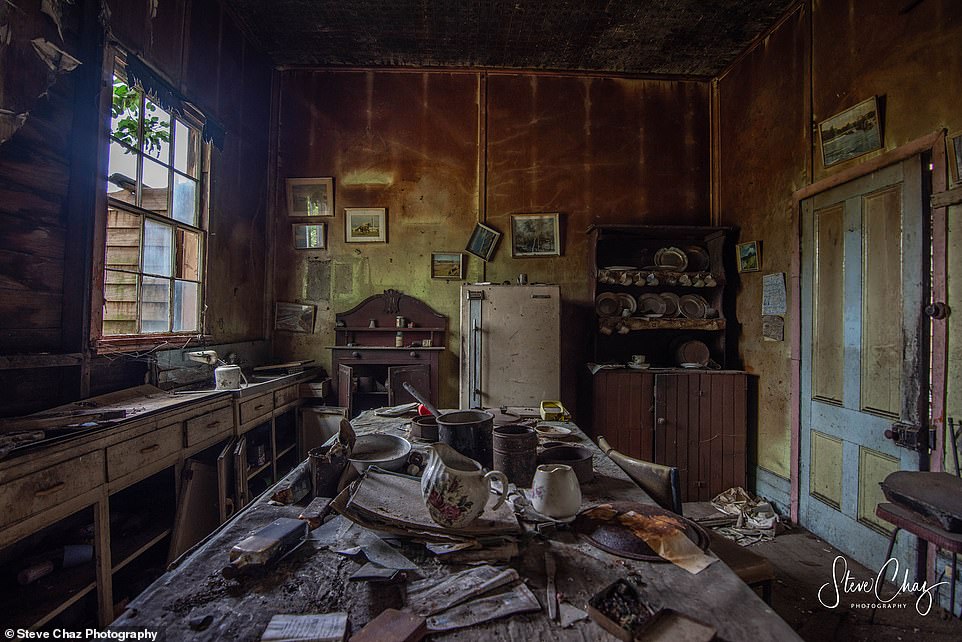 Pictured is the home’s kitchen, with knickknacks strewn over the table such as bowls and vases while clothes remain on the floor

‘Just knickknacks that would be used in daily life. There were still clothes hanging in a bedroom wardrobe and old shoes strewn around a home-made timber shoe-rack,’ Mr Chaz said.

There were also painting on the walls, clocks and old furniture.

‘There are a lot of photos on walls which were removed from calendars and framed,’ he said.

‘Hessian walls lined many of the rooms, and one room had some fancy floral wallpaper.’ 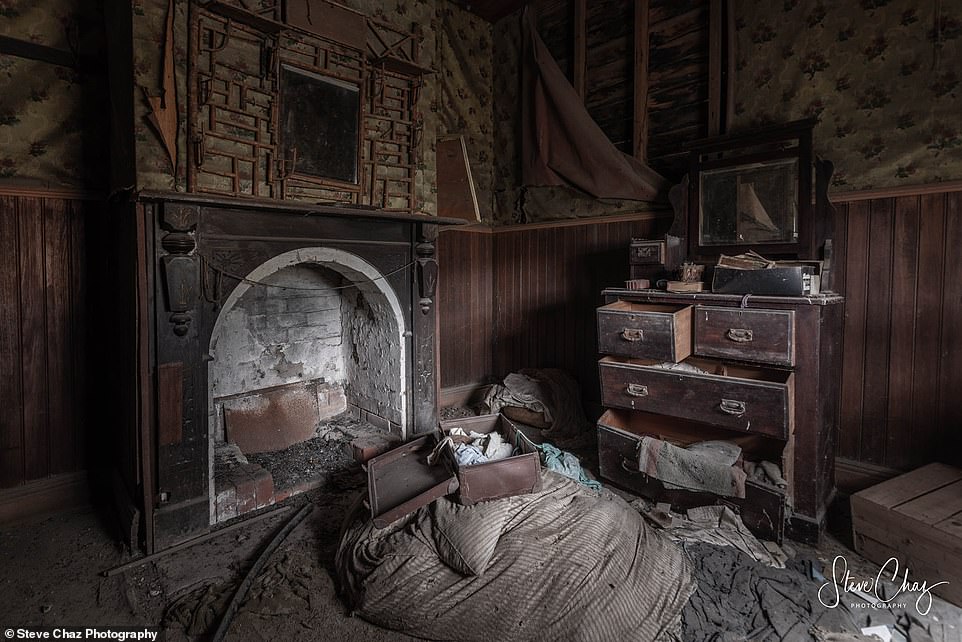 Mr Chaz’s images capture the exact moment the home was frozen in time – the kitchen is untidy and a row of books sits on a bookshelf, unread for 60 years.

The photographs show personal trinkets, vases, clocks and bowls, all showing the life of a rural Australian farmer in the 1960s.

‘There were closed suitcases I don’t open out of respect,’ Mr Chaz said.

Mr Chaz refused to touch anything in the house.

‘Only what was open was photographed. There is no rummaging through stuff. I treated the house and the contents with respect.’

Mr Chaz said judging from what was left behind, the home was owned by a war veteran. 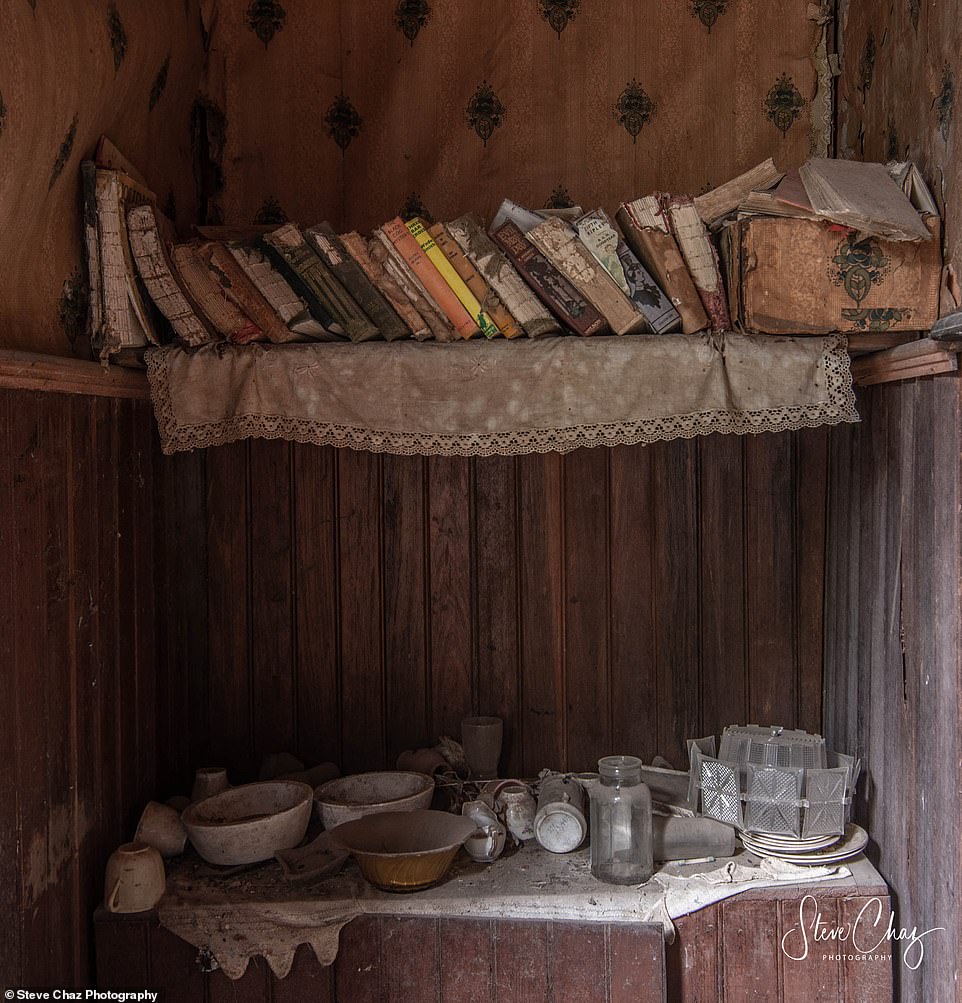 Mr Chaz’s images capture a home frozen in time, the kitchen left untidy and a row of books sat on a bookshelf

‘I took nothing from the site but photos and memories of it,’ the photographer said.

‘I respect it as someone’s property and a house that provided a haven and safety for those who lived in it.’

He said he could understand why the home may have been abandoned by the owner as it was in no state to be repaired. It was not close to any township, so it would have been near impossible to live there and travel between home, work or school.

‘From my perspective I see beauty in its fragile state and hopefully my photographs present it in such a way so that it can be remembered once it is long gone,’ he said.