Victoria has reported more Covid-19 cases than NSW for the first time since the Delta crisis began as the northern state recorded 863 new infections and seven deaths on Tuesday.

The Victorian Department of Health earlier in the day confirmed 867 local cases of the virus.

NSW Health Minister Brad Hazzard said the state’s single-dose vaccination rate had hit 85.7 per cent – while 60.4 per cent are fully-vaccinated.

Pictured: A Covid-19 vaccination hub in the Sydney CBD on September 24. Victoria has reported more Covid-19 cases than NSW for the first time since the Delta crisis began

The state is meanwhile preparing to emerge from lockdown in a fortnight after almost four months of stay-at-home orders for large swathes of the state.

Premier Gladys Berejiklian on Monday declared the beginning of the ‘COVID-normal’ era from December, with the phasing out of statewide or region-wide lockdowns to begin within two weeks.

Socially distanced reintroductions to hospitality venues and hairdressers will likely begin from October 11, at 70 per cent full vaccination coverage.

About two weeks later, the state is expected to reach 80 per cent coverage and travel between Greater Sydney and regional NSW will resume.

From October 25, gathering caps should increase to 10 fully vaccinated visitors in homes, 20 people outdoors, a maximum of 200 people for COVID-safe events and up to 500 people at ticketed and seated events.

Entertainment venues such as cinemas and theatres can operate at 75 per cent capacity, libraries and museums can reopen and community sport will resume. However nightclubs will remain closed. 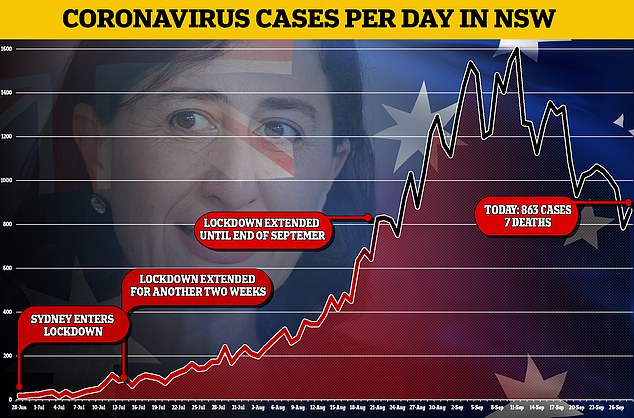 NSW has recorded seven deaths – including two residents in their 80s, two in their 70s and one each in their 40s, 50s and 90s

NSW Police Commissioner Mick Fuller says police won’t be routinely stopping people asking to see their vaccination passports but will be available to help business owners who refuse service to anyone.

‘We will not be walking through restaurants and cafes and pubs checking if people are double vaccinated,’ he told 2GB radio on Tuesday.

‘We will certainly be assisting restaurant owners and shop owners if they are refusing entry to someone, we will certainly respond to assist those people … it’s important that we keep calm out there.’

From December 1, life will return to near normal for all NSW residents.

The ‘four square metre’ social distancing rule reverts to two square metres and those who aren’t vaccinated can reintegrate with society.