Veterinary and pet pharma group CVS has acquired a vet centre for £3million as it continues to cash in on the pet ownership boom seen during the pandemic.

The Norfolk-based firm said it has bought Old Courts Veterinary Centre, a veterinary practice in North Lincolnshire, and has secured enough cash and bank facilities for ‘further’ acquisitions.

CVS was forced to sell Quality Pet Care, which it had bought in August last year, after the competition watchdog concluded that the deal could leave pet owners in some local areas of the UK worse off.

CVS said it will take a £12million hit from the aborted deal, after it sold the company for £9million on Thursday, having paid £20.4million for it in August 2021.

However, it did not change its guidance for the year and said trading remained in line with expectations.

CVS, one of the six largest corporate vet groups in the UK, operates over 450 veterinary practices across the country, and offers services including out-of-hours care, diagnostic laboratories and pet crematoria.

The UK has seen a massive reduction in small, independent veterinary practices in recent years, primarily as a result of acquisitions by big corporate groups like CVS.

The Competition Markets Authority said that while independent veterinary practices accounted for 89 per cent of the UK veterinary industry in 2013, this had fallen to approximately 45 per cent by 2021.

The watchdog, which launched an investigation into the Quality Pet Care deal just a couple of months after it was announced, said this week it would drop the probe if CVS agreed to offload the business. 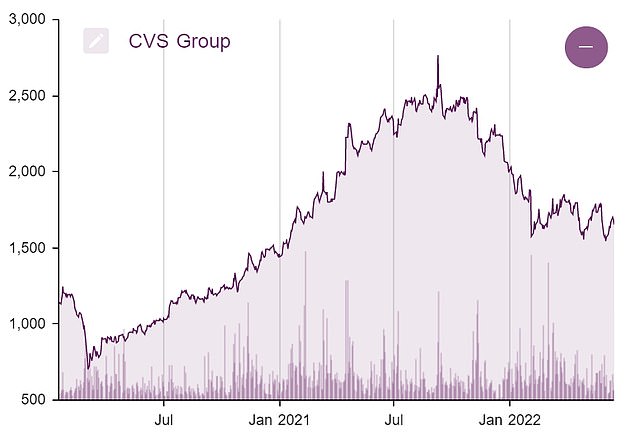 During its investigation, it found that groups like CVS often looked to ‘establish a significant presence within specific localities’ to benefit from economies of scale, but this often means less competition.

It said it had received a number of specific concerns relating to the merger of the two companies.

‘Some third parties suggested that high levels of corporate consolidation in local areas through the acquisition of independent vet practices were leaving consumers with a lack of sufficient alternatives,’ it said in February.

‘Third parties also noted that the implications of corporate consolidation were not always obvious to customers because some corporate owners decide not to rebrand independent veterinary practices after buying them.’

It concluded that that deal would result in a ‘substantial lessening’ of competition in the local areas of Bristol, Nottingham, Portsmouth, Southampton and Warrington.

CVS shares dropped by nearly 2 per cent to £16.23 in morning trading on Friday.

They have fallen by around a third over the last year and remain well below their pandemic peak of around £28.