VERY Footloose! Office worker, 29, launches herself onto family Christmas tree as she dances along to movie classic – only for festive fir to collapse on top of her

This is the moment an office worker is overcome with Christmas spirit as she launches herself at her Christmas tree during a rendition of Footloose.

Kayleigh Milne, 29, was enjoying a dance to the Kenny Loggins classic at about midnight on Christmas Day in East Kilbride, Scotland, when she attempted the festive stunt.

After singing along while the movie plays on the family TV in the background, Kayleigh boogies to the instrumental before preparing for the climax of the song.

Kayleigh Milne, 29, enjoys a dance to Footloose on Christmas Day while partying with her nephew Josh before preparing to launch herself at the Christmas tree at the song’s crescendo

The office worker had had a few drinks and as she leaps for the crescendo, Kayleigh lands right on the festive fir which promptly falls over on top of her.

Kayleigh said: ‘We’d had a few champagnes in the morning and had been drinking throughout the day and having a wee dance…I don’t know what happened!’

She had visited her mother and father for the holiday, but stayed up to carry on the party with her nephew Josh, 16, after the rest of the family had gone to bed. 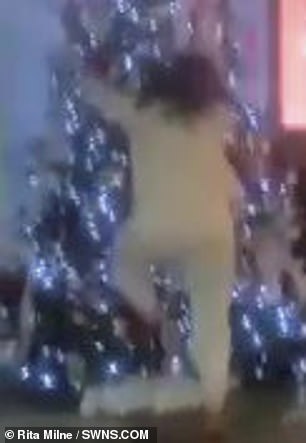 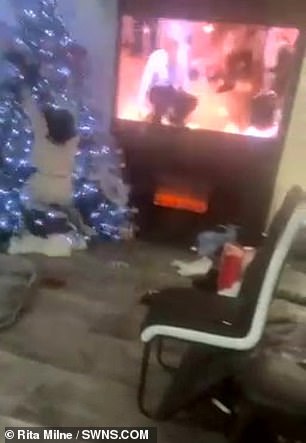 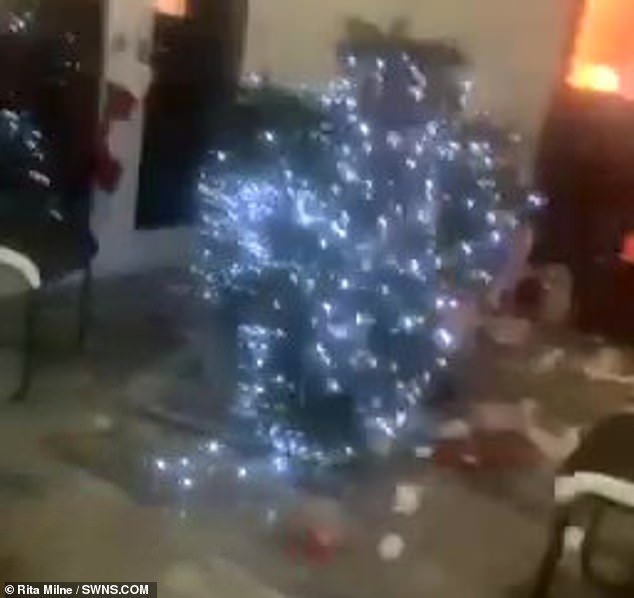 When Kayleigh clung to the Christmas tree, it promptly came crashing down on top of her creating a mess which the pair cleared up before the family came down in the morning

She said: ‘We had to take the tree down afterwards as there were a lot of baubles everywhere, we’ll sort out what’s been damaged next year!

‘I think my mum was quite happy all the tidying had been done the next morning!’

Schoolboy Josh was expecting to capture some embarrassing footage of his aunt dancing but caught the spectacular dive on camera!