EXPRESS INFORMER > Health & Medicine > Vermont is the most vaccinated state in the US- so why are Covid cases rising?

Despite having the highest vaccination rate in the country, Vermont has been dealing with a dramatic increase of COVID-19 cases.

Infections have risen by 55 percent over the last two weeks to an average of about 300 per day, according to a recent report from the state’s Department of Financial Regulation.

Yet 80.9 percent of the state’s total population has had at least one dose – second only to Massachusetts – and 71.8 percent are fully vaccinated, higher than anywhere else, according to data from the Centers for Disease Control and Prevention (CDC).

So why is The Green Mountain State facing its worst Covid surge?

Experts say there are a few reasons for this including low vaccination rates among younger people, college students gathering unmasked for Halloween parties, and not enough residents with natural immunity.

Vermont is the most vaccinated state in the nation with 80.9% of the population with one dose and 71.8% fully vaccinated but cases are surging (file image) 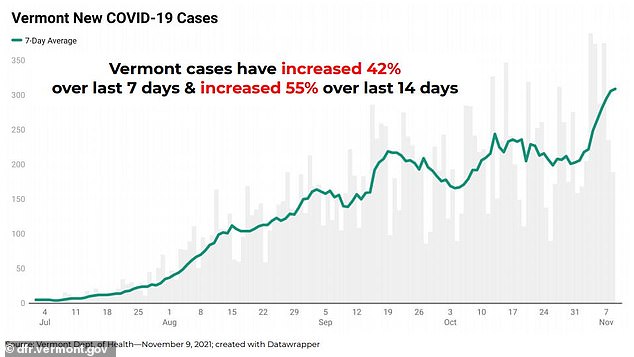 One of the reasons for Vermont’s increase in cases is younger people who have not yet been vaccinated against Covid.

According to the report, residents under age 30 are the most responsible for new infections of the virus.

Kids between ages zero and nine are recording the highest number of cases at 70 per 100,000 in this group.

However, this group only recently became eligible for vaccination, meaning that it remans to be seen if pediatric vaccines will help drive down COVID-19  cases.

Teenagers between ages 12 and 15 only became eligible in May to be vaccinated in May while young adults have been among the least likely to get shots due to the belief that they don’t need them. 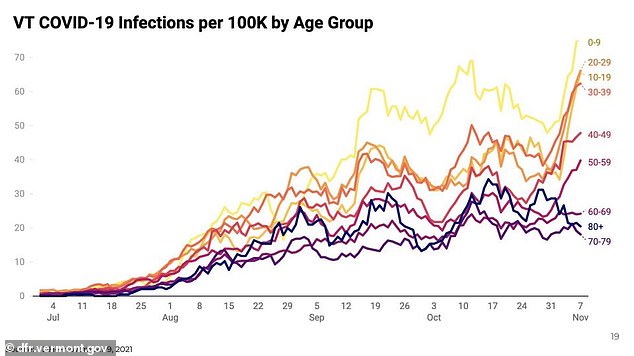 Experts say one of the causes behind the surge is the number of young people, such as adults between ages 20 and 29, who aren’t vaccinated 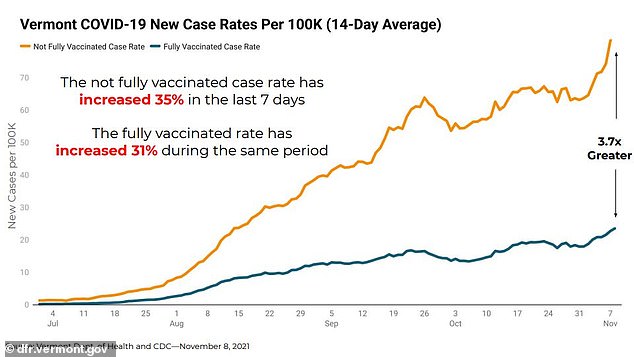 Essex County, which is the least-vaccinated Vermont county in the state, is reporting the highest number of weekly cases at 1,022 cases per 100,000 between November 2 and 8, the report found.

By comparison, Grand Isle County, the most vaccinated county, reported 160 per 100,000 over that same time period.

‘Across the United States and in Vermont, we’re seeing the impact of the highly contagious Delta variant,’ Dr Jan Carney, associate dean for public health and health policy at the University of Vermont’s Larner College of Medicine, told ABC News.

‘It really is so contagious, it seeks out pretty much every unvaccinated person.’

The report finds that over the last seven days, 67 percent of hospitalizations have been as have 64 percent of critical care stats.

Another factor is behavioral changes, including more people congregating together maskless and having parties, such as for Halloween

At Saint Michael’s College – three-and-a-half miles northwest of Vermont – 89 students tested positive for Covid last week and the week priior, according to the college’s dashboard. 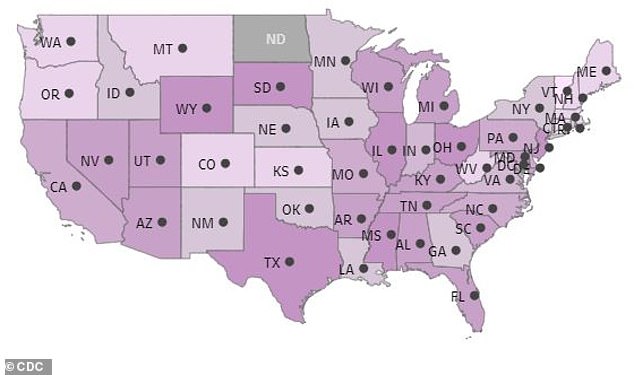 ‘We were doing really well as a community up to the point where there were numerous Halloween parties where students were unmasked and in close contact,’ she wrote in a letter on Sunday.

Additionally, some experts say there are not enough residents with natural immunity to also prevent COVID-19 cases.

We are ‘a victim of our success because we kept the virus at such low levels throughout the entire pandemic,’ Dr Mark Levine, Vermont’s health commissioner, said on Tuesday.

CDC data show that Vermont has one of the lowest rates of residents who developed natural immunity to Covid at less than two percent.