A vast majority of Americans over 50 are suffering from join pain, with many saying the pain prevents them from taking part in some day-to-day activities.

Pollsters at the University of Michigan found that 70 percent of Americans over 50 report suffering from joint pain – with eight percent describing their pain as ‘severe’. Women and people older than 65 were the most likely to report pain.

Joint pain can be debilitating for some sufferers. Half of those who reported feeling symptoms said it limited their physical activity and a third said it interfered with their day-to-day lives.

Researchers are worried that many of the sufferers are choosing to manage their condition with over-the-counter pain relievers – which two-thirds reported – not realizing that there are safer more effective options available if they seek medical attention. They also worry that some prescription options are carrying risks that the patient may not be aware of.

It can also be an early sign of arthritis, a serious medical condition that required medical attention to manage.

The This National Poll on Healthy Aging report, published by the university on Monday, surveyed 2,277 people aged 50 to 80.

Of the sample group, 70 percent reported some sort of regular joint pain. When asked about the severity of pain, 31 percent each said it was either mild or moderate pain

Eight percent of respondents said that they suffered from severe joint pain. The remaining 30 percent did not report suffering from the condition.

Risk of suffering from joint pain increased as age did, with just under three-of-four respondents in the older half of the age cohort, 65 to 80, reporting the condition.

Among the younger half, those aged 50 to 64, 68 percent said that they were experiencing joint pain. 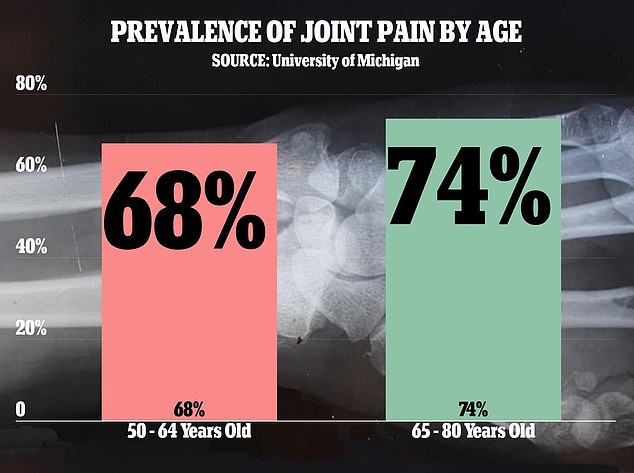 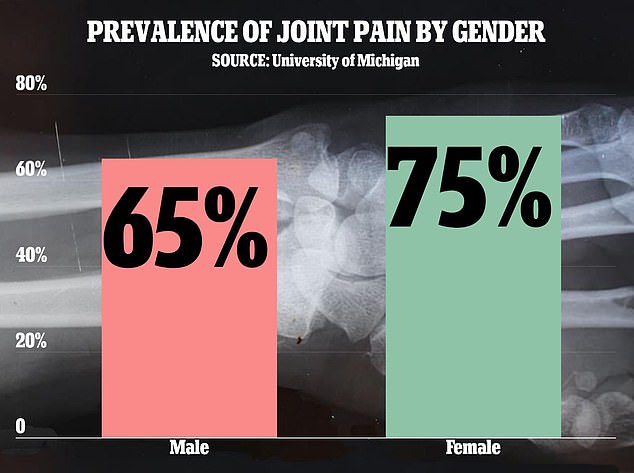 Around half of those that said they do experience joint pain said they felt it every day, with the nearly the same amount also reporting that it limited activities they could take part in.

Just over a third of joint pain-sufferers said that the symptoms interfered with their day-to-day lives.

Mental and physical health played a role as well, according to the pollsters.

‘Those who say their overall health is fair or poor were twice as likely to say they have moderate or severe joint pain as those in better health,’ Dr Preeti Malani, a physician at Michigan Medicine, said in a statement. 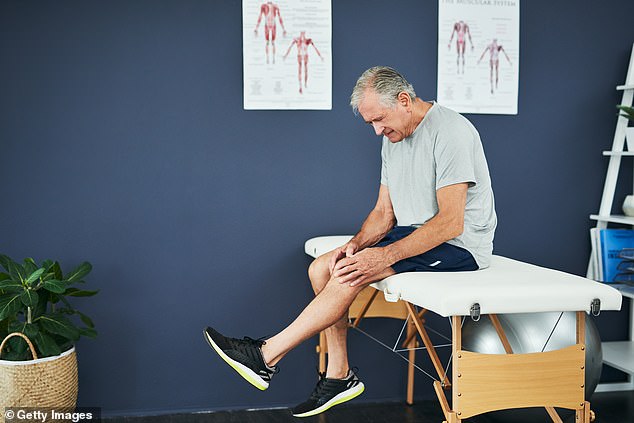 Many elderly Americans that are suffering from joint pain are using drugs to manage their condition, but experts fear they do not know the potential long-term negative side-effects of using them (file photo)

Many patients are trying to self-medicate, with 80 percent saying they are confident they could manage it on their own.

Two-thirds of sufferers use over-the-counter pain killers like Aleve or Tylenol to manage their pain. A quarter say they take some sort of daily supplement, while around 20 percent use marijuana or a CBD product.

A large portion also utilize prescription drugs to manage their pain, usually being unaware of the risks those medications pose.

“There are sizable risks associated with many of these treatment options, especially when taken long-term or in combination with other drugs,’ Dr Beth Wallace, an assistant professor of rheumatology at Michigan, said in a statement.

‘Yet 60 percent of those taking two or more substances for their joint pain said their health care provider hadn’t talked with them about risks, or they couldn’t recall if they had.’

‘And 26 percent of those taking oral steroids hadn’t talked with a provider about the special risks these drugs bring.’