Kobe Bryant’s widow, Vanessa, has congratulated New York Liberty point guard Sabrina Ionescu on her engagement to NFL reserve center Hroniss Grasu. The WNBA star previously trained with the late Lakers legend and even eulogized him, along with his daughter, Gianna, at their funeral two-years-ago.

‘It’s always us,’ the 25-year-old, who holds the title of the most career triple-doubles in NCAA history, shared earlier in the day, along a heart emoji in the middle of the caption to her Instagram post. ‘Here’s to forever with you 1.20.23 #finally.’ 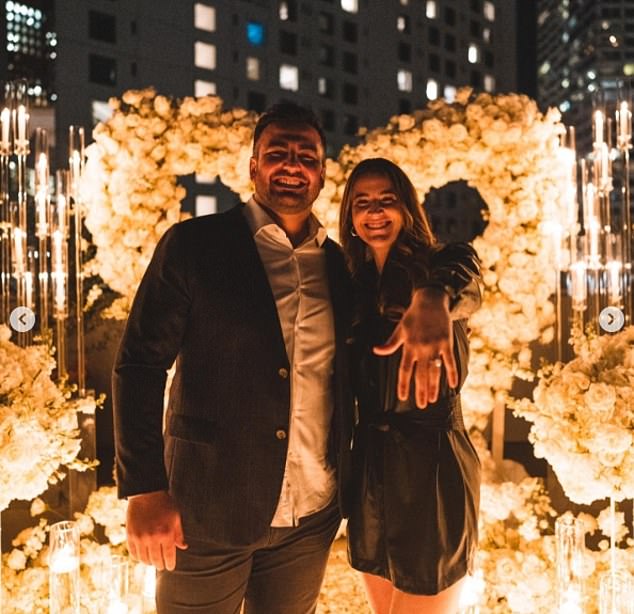 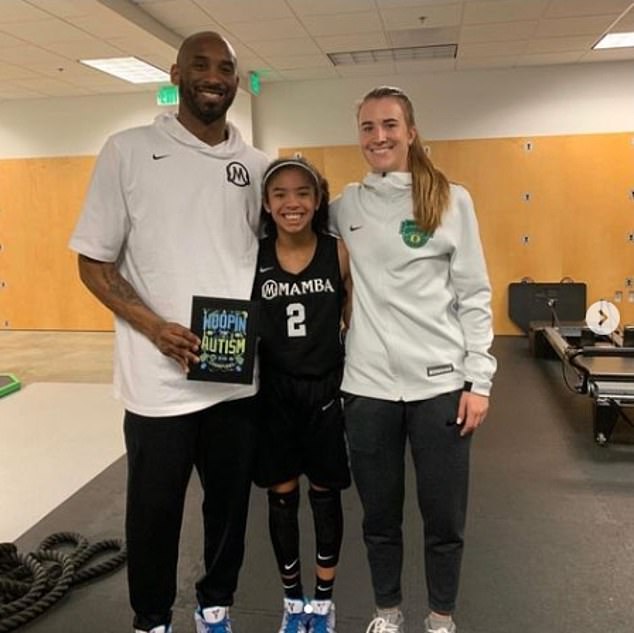 Ionesco used to train with Kobe Bryant and his daughter, Gianna, in 2019 before their deaths

The surroundings of Ionesco’s engagement consisted of an array of white roses and elevated candles in multiples shapes of a heart. Grasu waited for the WNBA All-Star to realize that he had prepared a surprise for her before ultimately popping the big question.

It is believed that the pair have been dating since 2020. Both attended the University of Oregon, though they didn’t meet on the West Coast, as their athletic careers never converged during their college days.

Grasu, who was last promoted to the Las Vegas Raiders’ active roster in December, played for the Ducks from 2011 to 2014, before being drafted by the Chicago Bears in 2015. He’s previously signed with the Baltimore Ravens, Miami Dolphins, Tennessee Titans and the San Francisco 49ers before relocating to Sin City.

Ionescu, meanwhile, enrolled at Oregon in 2016  – a year after Grasu was drafted. She went on to become the only NCAA player with career 2,000 points; 1,000 assits and 1,000 rebounds (in women’s and men’s) before making the move to professional basketball. She was the No. 1 pick of the 2020 WNBA Draft when the Liberty selected her. 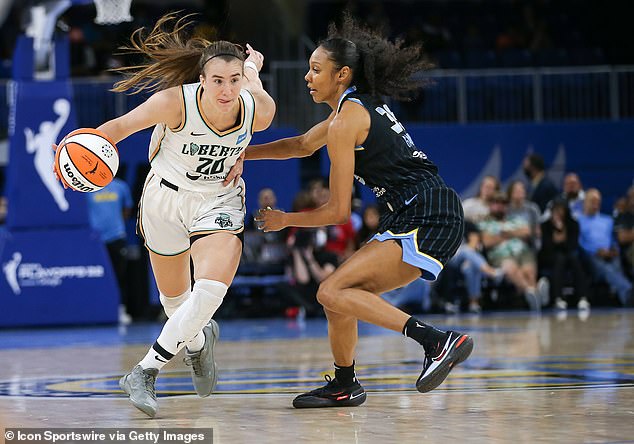 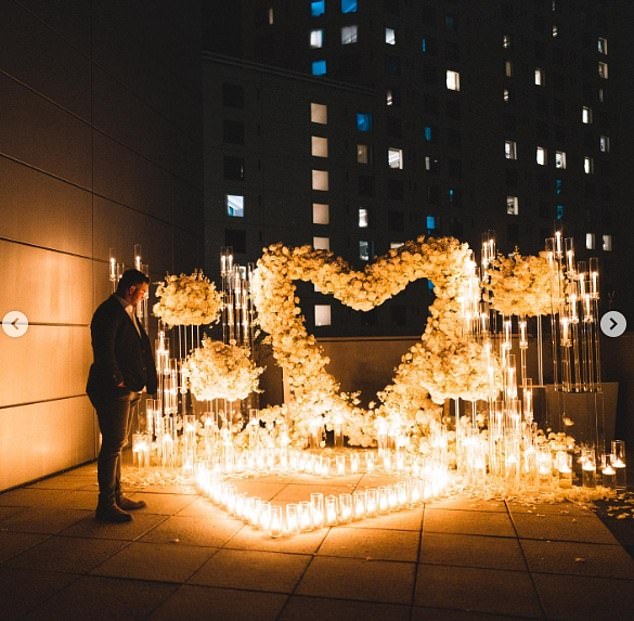 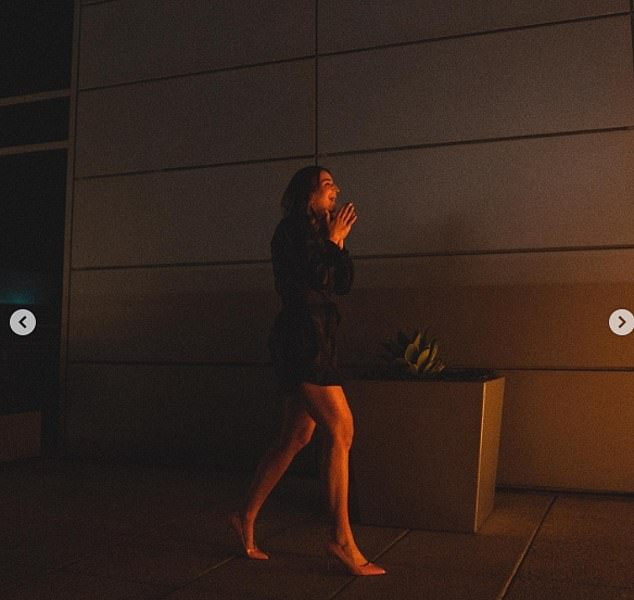 The American basketball player, of Romanian descent, was taken away by Saturday’s proposal

During her first season in the WNBA, Ionesco was forced to sit out in all but three games after suffering an ankle injury. She’s gone on to appear in 66 regular-season games for the Liberty over the last two years and she’s even guided her team to the 2021 and 2022 postseason.

Before going pro, however, she once registered a 21 points, 12 rebounds and 12 assists triple-double in the Ducks’ 74-66 win over No. 4 Stanford on February 24 2020, just about a month after Kobe and Gianna’s death in a helicopter crash in L.A.

Ionescu said afterward on the ESPN broadcast that it was especially meaningful to accomplish the feat on the particular day because of Bryant, who had mentored her over the last year or so.

‘I mean that one was for him,’ said Ionescu, who had taken a chartered flight from L.A. following Bryant’s memorial to arrive about 90 minutes before tipoff at Maples Pavilion, Stanford’s basketball arena. 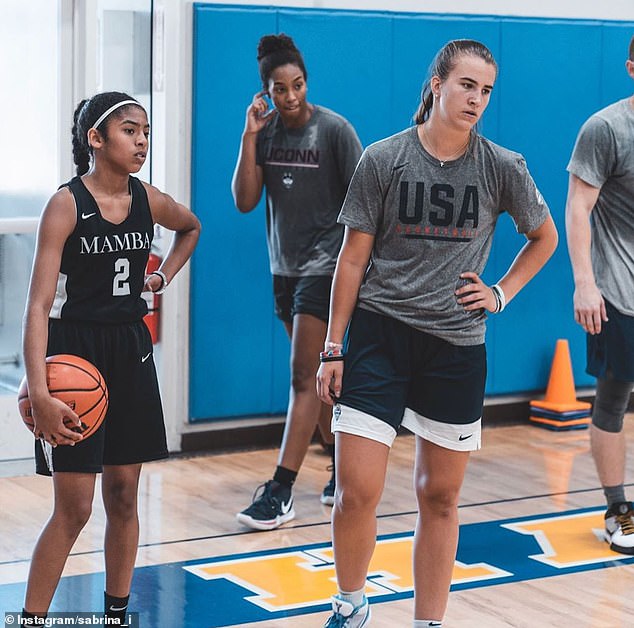 Ionescu was spotted by Kobe in 2019 at a Oregon-USC game. Seen with Gianna at practice 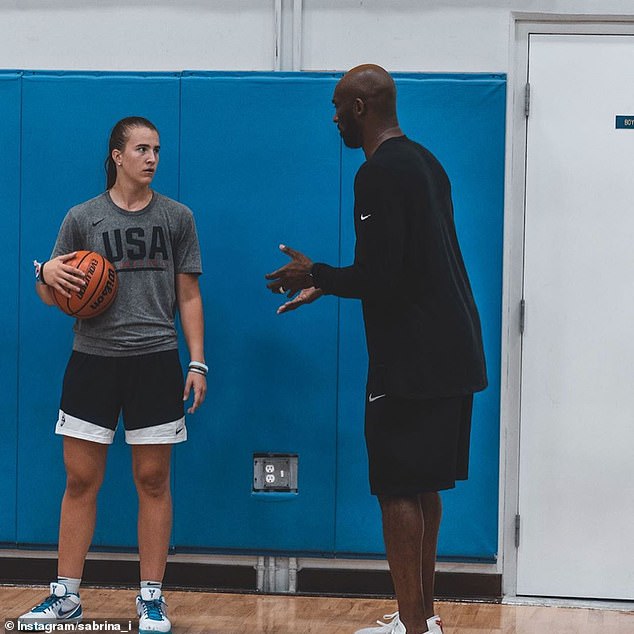 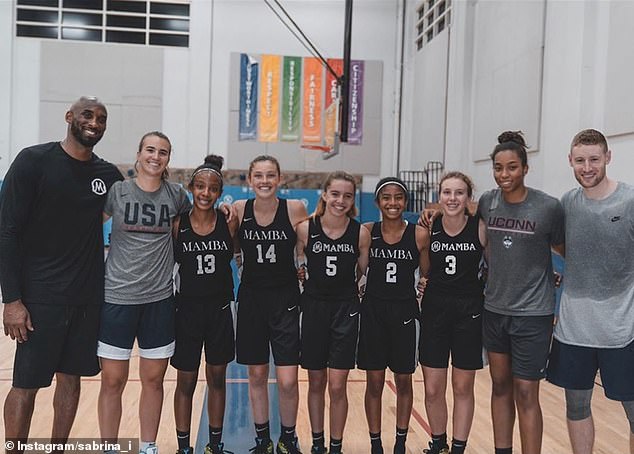 ‘To do it on 2/24/20 is huge. We had talked about it in the preseason. I can’t really put that into words. He’s looking down and really proud of me, and just really happy for my team.’

‘Being able to speak [at the memorial] was such an honor for me,’ the WNBA star added, before claiming that if she ‘represented the present of the women’s game, Gigi represented the future, and Kobe knew it.’ 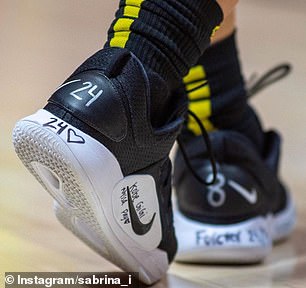 Ionescu once honored Kobe and Gigi Bryant on her Nikes before a February 2020 game against No. 4 Stanford. She ended up scoring 21 points, 12 rebounds and 12 assists for the Oregon Ducks in that game

In her speech at ‘Mamba’s’ memorial, Ionescu told the story of meeting Kobe and Gianna Bryant in 2019, when the Lakers legend sat courtside along with his 13-year-old daughter, as the Ducks played USC in L.A.

She described her interactions with both in the months since, including on-court moves that Kobe Bryant helped teach her.

‘He taught me his step-back, he told me that if I could bring that to my game it would be over for any defender trying to guard me,’ Ionescu said. ‘He was giving me the blueprint. He was giving Gigi the same blueprint.’