Vandals have daubed graffiti on Prince Albert’s stone memorial as rangers cleared the remains of a campfire and litter on the Queen’s Balmoral estate.

Managers shared pictures of the mess left behind at the 55-acre site in Aberdeenshire, describing the tidy-up as a ‘typical start’ to the week.

Prince Albert’s cairn, shaped as a pyramid, is the largest of the 11 memorials on the estate and was built by Queen Victoria in tribute to her husband, who died in 1861.

The vandalism follows staff posting images showing how the roots of ancient pines were chopped up for tourists to pile on still-smouldering fires at the estate, sparking fears over devastating wildfires.

Rangers at the Balmoral estate shared an image, above, showing the name ‘Andy T’ scrawled twice across the stone, posting that the tidy-up was a ‘typical start to the week’ 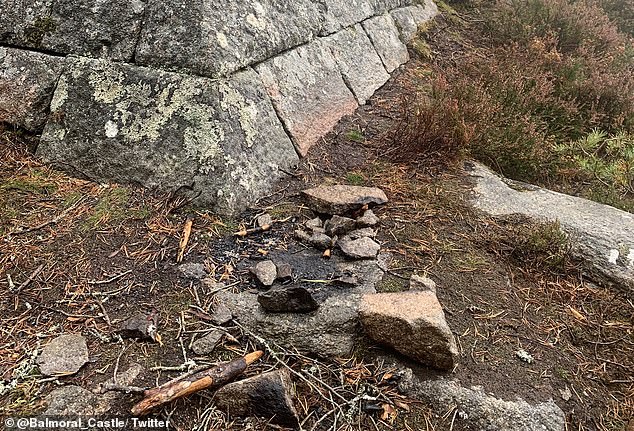 The remains of a fire and litter left next to Prince Albert’s cairn, which is shaped as a pyramid and is the largest of the cairns on the estate, built by Queen Victoria in memory of her husband

The rangers posted on Monday: ‘A typical start to the week for the Balmoral rangers.

‘Clearing a campfire, graffiti and litter from near Prince Albert’s cairn.’

The tweet was accompanied by two images showing a leftover campfire and the name ‘Andy T’ scrawled twice across the stone.

‘When we holidayed in the Highlands as children my parents always made sure they took all their litter home and left the picnic area as they found it.

‘Why can’t these idiots do the same?’

The rangers’ post on Monday. Twitter users reacted to the post in fury, with one commenting: ‘What is wrong with people?’ and another writing: ‘Totally beggars belief!’

What are the eleven stone cairns on the Balmoral estate?

The eleven stone cairns on the Queen’s Balmoral estate commemorate various members and unions within the Royal Family.

Most of the monuments were erected by Queen Victoria and mark the marriages of her children, including Prince Arthur, Prince Leopold, Prince Albert Edward, the Princess Royal, Princess Beatrice, Princess Louis, Princess Alice and Princess Helena.

A cairn to John Brown, Queen Victoria’s servant and a personal attendant, was built after his death but later removed by Edward VII.

Prince Albert’s cairn, a pyramid, is the largest of the 11 memorials on the estate and was built by Queen Victoria in tribute to her husband, who died in 1861.

Two cairns celebrate Queen Elizabeth II’s Diamond Jubilee in 2012 abd one is designed with a slate plaque, etched with the Queen’s initials and date.

Another wrote: ‘I’ve visited this magnificent spot and it’s a shame that some irresponsible people are prepared to desecrate it.

‘Good on the rangers, but it shouldn’t be a ‘typical’ start to the day for them.’

And a fourth questioned: ‘What is wrong with people?’

Rangers also slammed wild campers at the site in July, after a group had left tents and rubbish on the grounds.

Some of the camping chairs were pictured knocked to the ground, while tree branches lay in the middle of the campsite, set up for a fire.

‘However, it should also be noted that the vast majority of visitors are well behaved and that many of the issues stem from a lack of understanding.

‘We will be looking at areas for infrastructure investment with partners this winter as we look to develop visitor management plans for 2021.’

Back in 2008, Prince Charles attacked litter louts who he said treated the British coastline like a dustbin.

Princes William and Harry have also recounted how their father used to make them pick up litter with ‘spikes’ while on vacation to the Aberdeenshire estate. 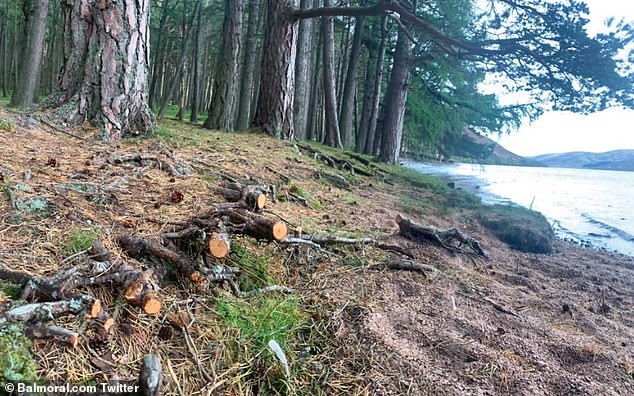 Roots of ancient pines at the estate seen chopped up last month for people to pile onto their fires. Rangers said: ‘Depressing to find more roots being cut off the old Scots pine trees’ 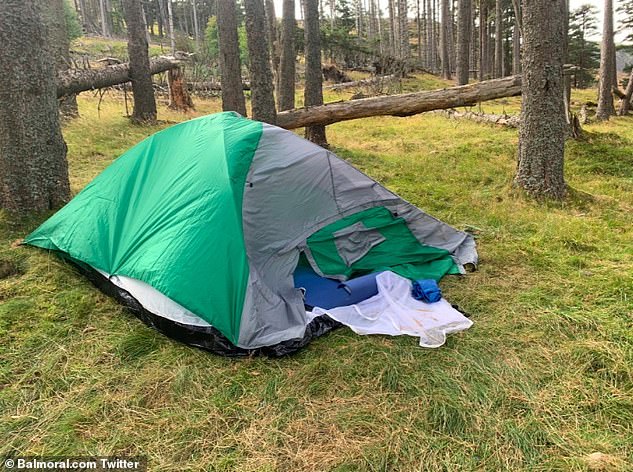 An empty tent left at the estate in Aberdeenshire, above, in an image previously shared by park rangers. It followed an influx of visitors at the site after the easing of lockdown restrictions

The Balmoral estate slammed litter bugs in 2018, after people left nearly 43lb of rubbish on its slopes. The haul included plastic bottles, wrappers and plastic containers.

They also hit out at people who left a mountain of rubbish in a bothy, a basic shelter, in 2016.

It took a total of three trips, by one of Her Majesty’s Land Rovers, to clear the quantity of rubbish, which included abandoned shopping trolleys.

Balmoral has been owned by the royal family since 1852 and is Queen Elizabeth’s Scottish holiday home.