EXPRESS INFORMER > News & Politics > Utah Woman, 19, lives life to the fullest after having legs amputated due to actions of drunk driver

An inspirational young woman who had to have both legs amputated above the knee and was left paralyzed after a drunk driver plowed into her car is documenting her positive outlook on life and miraculous recovery on social media.

On the night of July 30, 2020, Sarah Frei was traveling home from a day at Bear Lake in Utah with three friends when a drunk driver crashed into her.

Sarah, then 17, suffered the worst of the injuries of her friends, and she eventually needed to have both of her legs amputated.

Less than three months after the crash, Sarah was released from the hospital and went back to cheerleading with her squad from her wheelchair.

Since then, Sarah, 19, has not stopped living, and has done everything from attending the Country Music Awards in 2021, to going skydiving and wakeboarding and even touring around Europe.

Sarah’s mother, Amy, told ABC4 that her daughter’s progress has been nothing short of astounding. 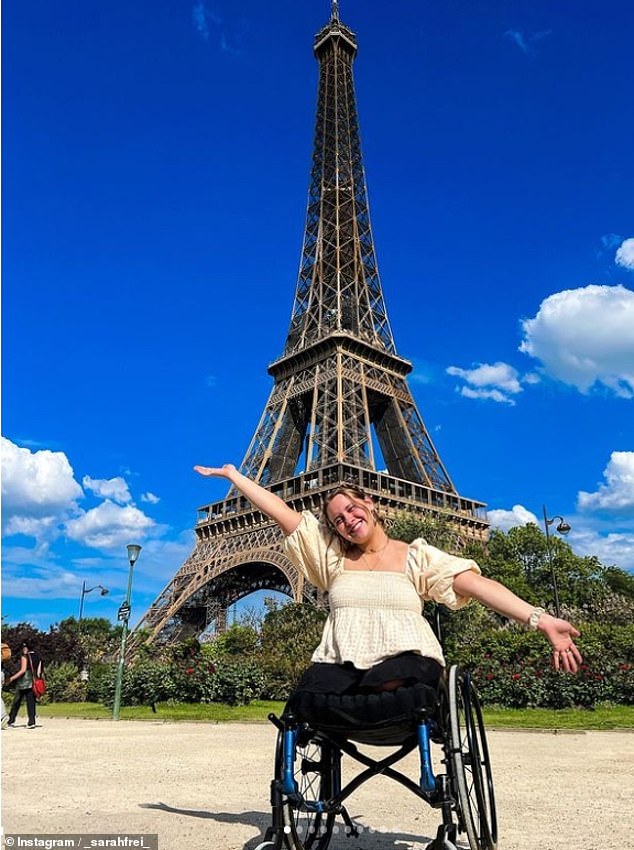 Sarah spent time in Europe in May 2022, updating her nearly 100,000 followers on her Strong.Like.Sarah Instagram page

Dustin Wesley Anderson, 45, pleaded guilty to driving his Dodge truck into Sarah and her friends while drunk on the night of July 30, 2020.

The injuries suffered by her friends included punctured lung and an abdominal contusion.

Sarah, now 19, has completed her first year at Utah State University, where she is studying to be an elementary school teacher, and has just returned from a vacation in Germany. She graduated from Clearfield High School, 30 miles north of Salt Lake City, in 2021.

She continued: ‘We didn’t know if she would be able to do anything ever again, it just seemed so devastating, the loss of her legs, and paralyzed as well, but to see her re-learning and getting strong so quickly after her accident was amazing.’

Sarah updates her nearly 100,000 followers about her various activities on her page, Strong.Like.Sarah.

Sarah told the station: ‘Re-learning how to do everything that used to be so normal was pretty difficult, that was probably the hardest time of it all.’

The teen added: ‘I didn’t think I would be so independent this soon after the accident, I thought I would need help from my parents for a really long time.’ 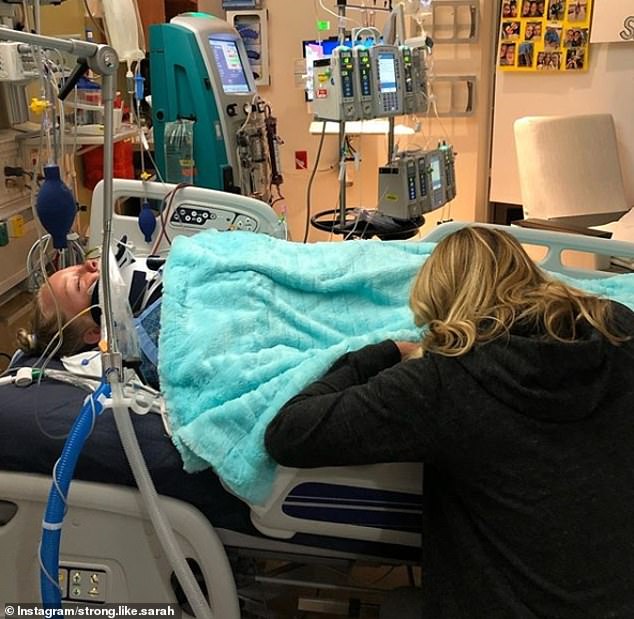 Amy Frei pictured at her daughter’s bedside in 2020

In February 2021, Sarah’s father, Greg, told KSL in an interview that when his daughter was laid up in the hospital, she constantly asked her parents if she would be able to do the things that she loved again. Her parents told her that she would.

Sarah told the station that while in her hospital bed, she came up with a new cheerleading routine set to a song by country music star Russell Dickerson.

When Sarah returned home from the hospital in October 2020, she performed the routine at a Clearfield’s final football game of the season.

She continued to cheer for the school’s basketball team from her wheelchair throughout their season.

In addition to being a cheerleader, Sarah was a member of the Clearfield High School golf and swim teams. 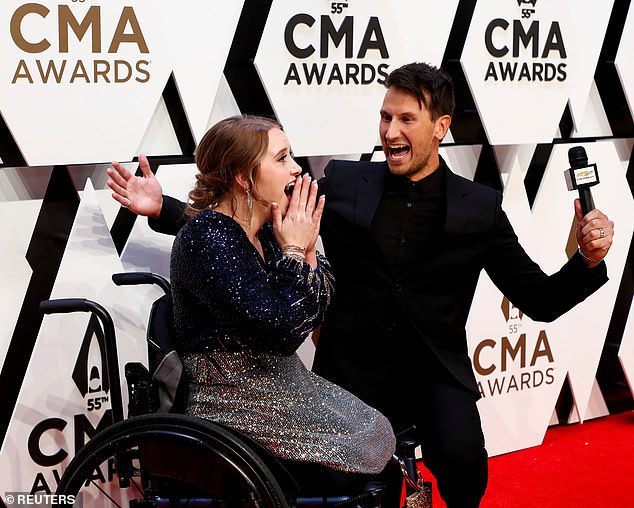 Making memories: Sarah Frei, who was surprised with a wheelchair-accessible car by Russell last December, was also in attendance at the Country Music Awards in 2021

Dickerson found out about Sarah’s story and gifted her an accessible car, a Chevrolet Traverse.

Sarah was told she was doing an interview about her story but when she sat down, Dickerson greeted her on a screen to tell her about the car.

At the time her father recalled telling his daughter: ‘If you told me six months ago that I would be in a car driving myself, you know, I’d have told you you’re crazy.’

In November 2021, Sarah was Dickerson’s guest at the Country Music Awards.

At the time, Sarah wrote about Dickerson on her Instagram page saying: ‘I got my car from Russell Dickerson and Chevy which is a HUGE blessing for me.’ 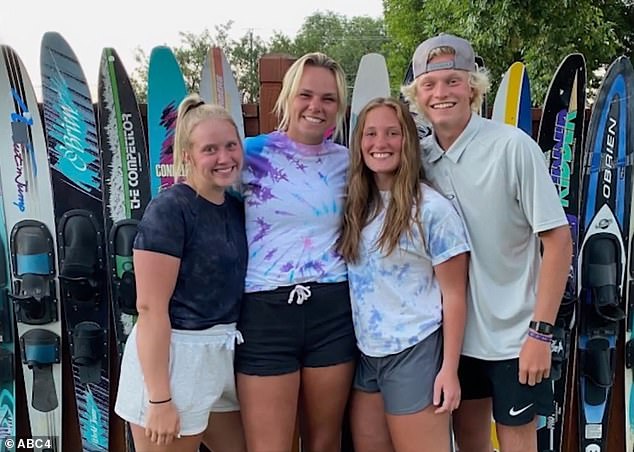 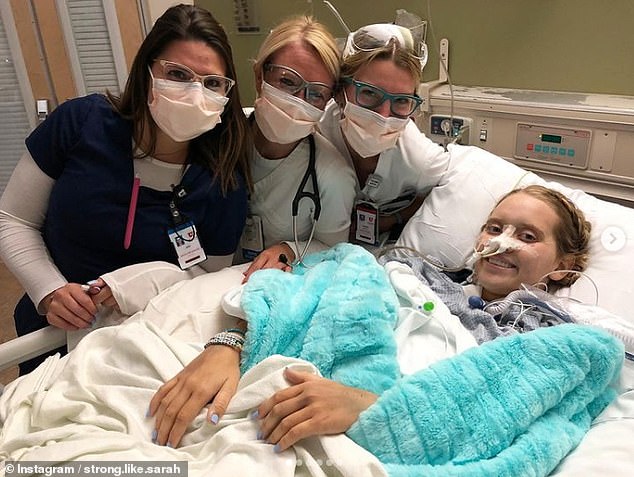 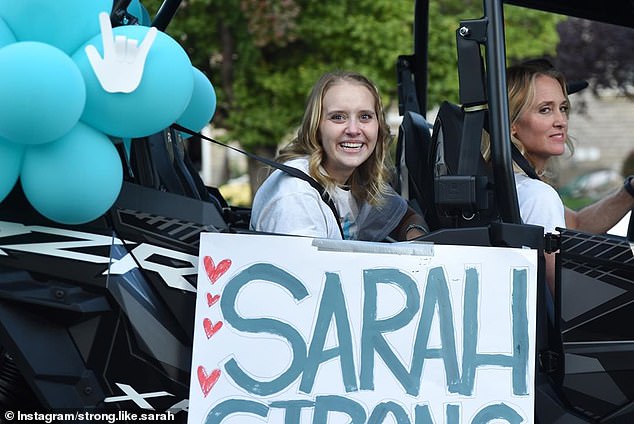 She continued: ‘I cannot express how grateful I am right now. I know that God is so good and he has sent angels to help me and to bless my life. Russell Dickerson is definitely one of those angels.’

She told KSL: ‘I think that that’s helped my progress, as well, because I’m constantly getting letters of encouragement, and that’s really special to me.’

The night before she was released from the hospital, Sarah’s mother said that her daughter told her: ‘Now on to the new and improved Sarah.’

In the aftermath of the crash, Sarah and her family threw their support behind a new Utah law named ‘Sarah’s Law.’ The bill was signed into law in late 2021.

The law sought to deny bail to those arrested due to a drunk driving incident that result in injury.

Greg said in his interview with KSL: ‘That’s been just another blessing to have come out of this tragedy, and to see the Legislature make changes to the Utah law that account for the gaps in the deficiencies has just been so wonderful.’ 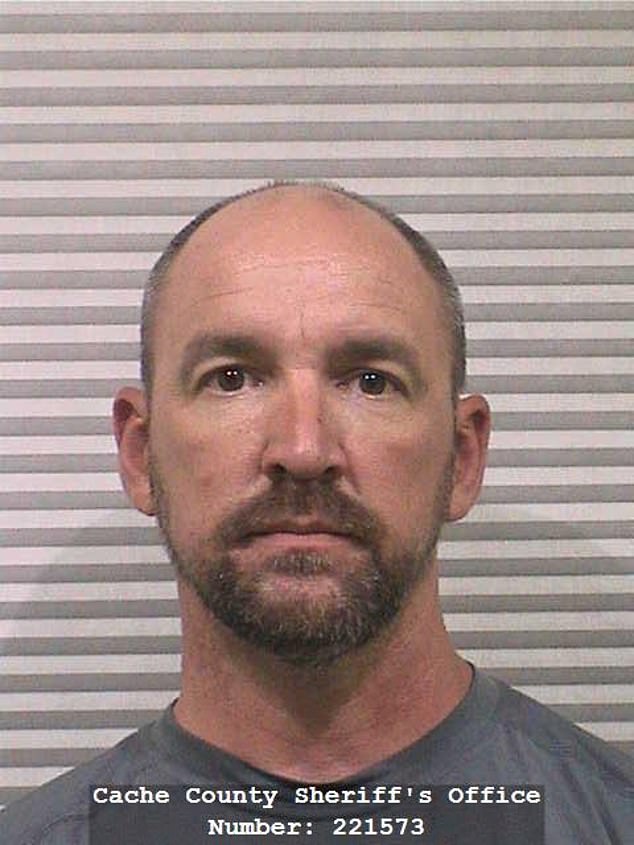 Dustin Anderson posted the $500 bail following the crash that led to Sarah’s amputation just a few hours after the incident.

Anderson reached a plea deal with prosecutors on four counts of DUI, a third-degree felony and reckless driving, a misdemeanor.

He was sentenced in April 2021. Anderson could spend a maximum of 12 years in prison.

Anderson told the court at sentencing: ‘I was blind to the reality of what my drinking could do and I never thought I could hurt anyone.’

Sarah and her three friends all spoke at sentencing.