The mysterious triangular metal monolith that appeared in the remote Utah desert and captured the attention of the nation vanished on Friday and explorers searching for the pillar said it was hauled away in a pick-up truck and they found in its place the words ‘Bye b****’ scrawled into the ground and a puddle of urine.

Curious tourists and explorers flocked to the structure – even though officials never disclosed its exact location – and posed for photos with the enigma as the public wondered if it was an art installation, an inexplicable message from alien life or just a stunt.

But by Friday the prism was removed by ‘an unknown party’, the Bureau of Land Management said in a statement.

‘All that was left in its place was a message written in the dirt that said “Bye b****” with a fresh pee stain right next to it,’ Marino said on Instagram on Saturday. 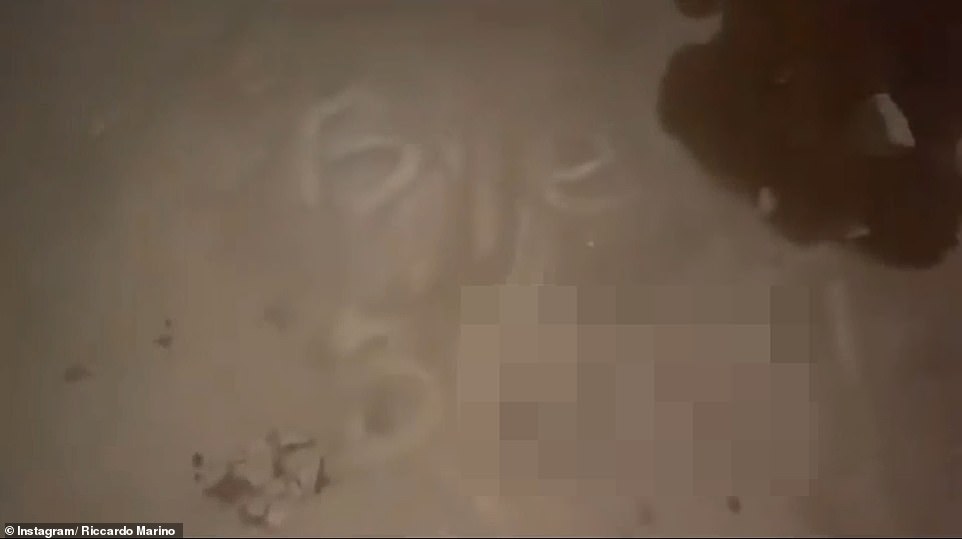 Adventurers Riccardo Marino and Sierra Van Meter trekked to visit the monument, located just east off Canyonlands National Park at 11.30pm on Friday, but found the red rocks empty. ‘All that was left in its place was a message written in the dirt that said “Bye b****” with a fresh pee stain right next to it,’ Marino said 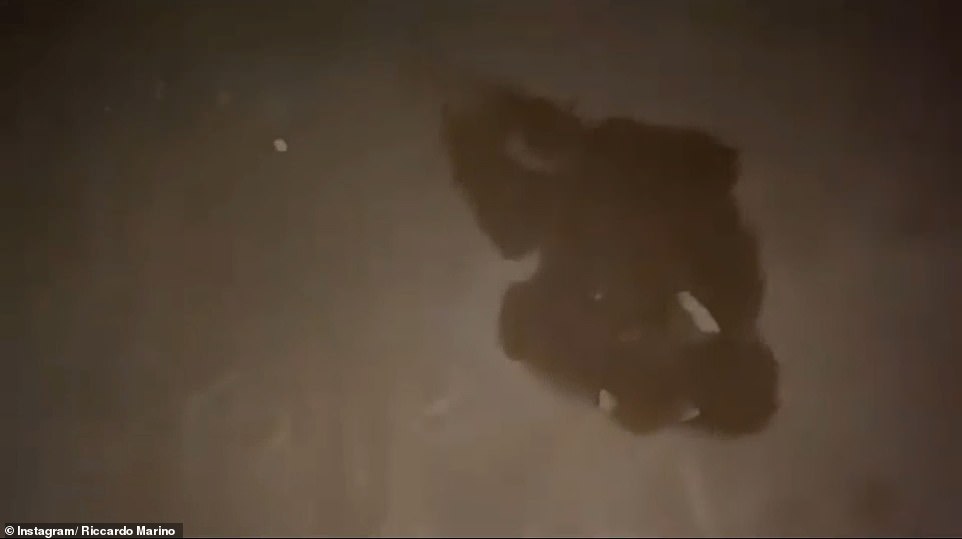 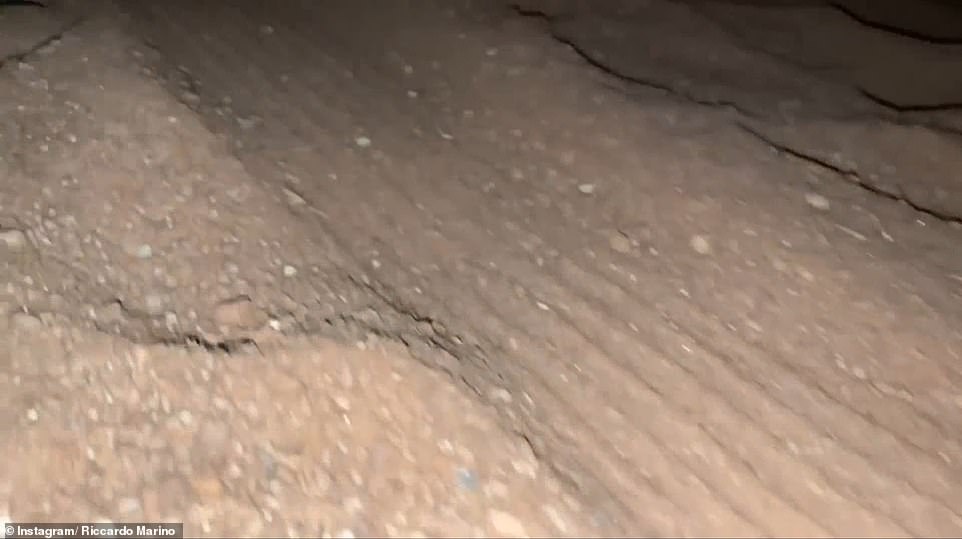 Marino said during their journey to the pillar they passed by a pick-up truck hauling a large object and they believe that was the monolith being towed away. He also found fresh tire tracks at the site 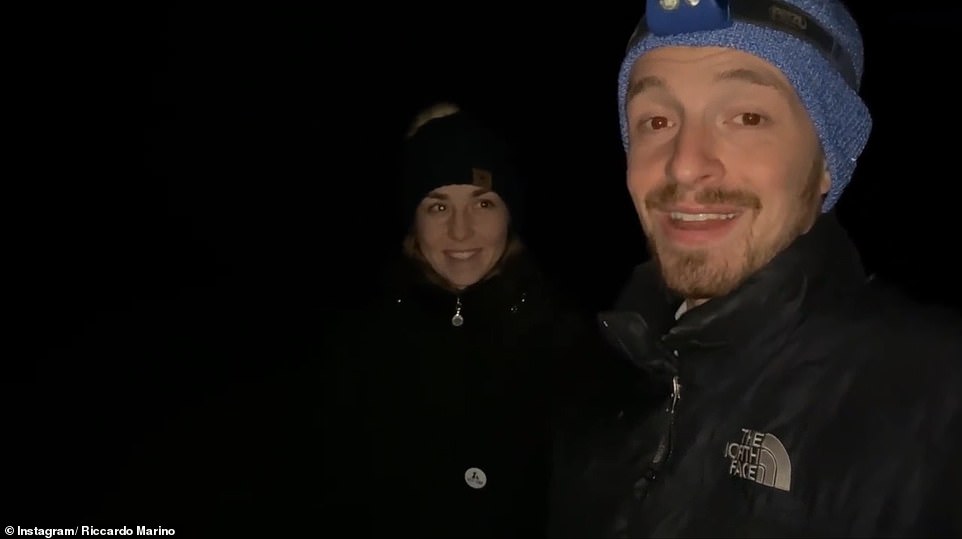 ‘On our way out we discovered fresh tire tracks that were made by a dolly, clearly left by someone not to long before us,’ Riccardo Marino, pictured above with Sierra Van Meter, said in a video shared on their social media after leaving the empty monolith site

‘Someone had just stolen the statue, and we were the first to arrive at the scene,’ he added.

Marino said during their journey to the pillar they passed by a pick-up truck hauling a large object and they believe that was the monolith being towed away.

‘At about 10.45pm roughly four miles into Lockhart Basin we passed a truck that was hauling a large object strapped down In the bed with the hatch open,’ he said.

‘I thought for a second that it was the monolith but after driving 8 hours to get here we ignored it and convinced ourselves they were hauling off-road vehicles,’ he added.

Marino shared video of the moment he and Van Meter arrived to the scene, only to find urine, the ‘Bye b****’ message and fresh wheel tracks in the dirt.

‘On our way out we discovered fresh tire tracks that were made by a dolly, clearly left by someone not to long before us,’ he said. 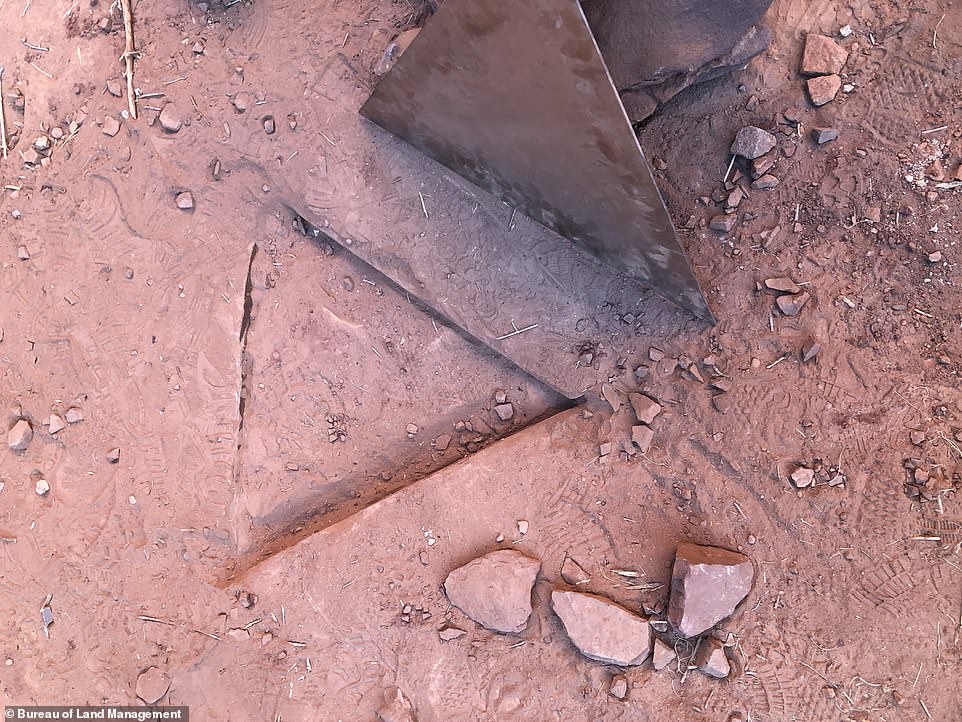 All that remains: The Bureau of Land Management shared photos of the site where the monolith once stood on Sunday. Now in its place all that remains is a metal triangle and a mark in the dirt from where it once stood 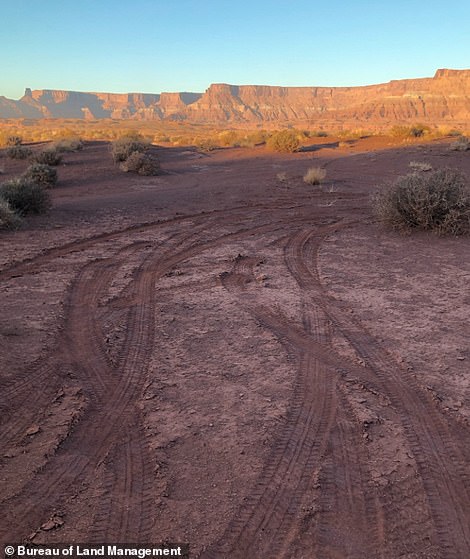 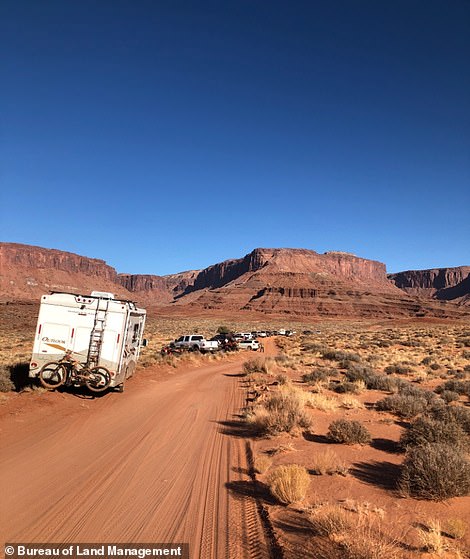 Utah’s Bureau of Land Management shared photos Sunday of tire tracks in the area of the monolith, east off Canyonlands National Park, to demonstrate the influx of visitors this infrequently visited area received due to the mysterious pillar 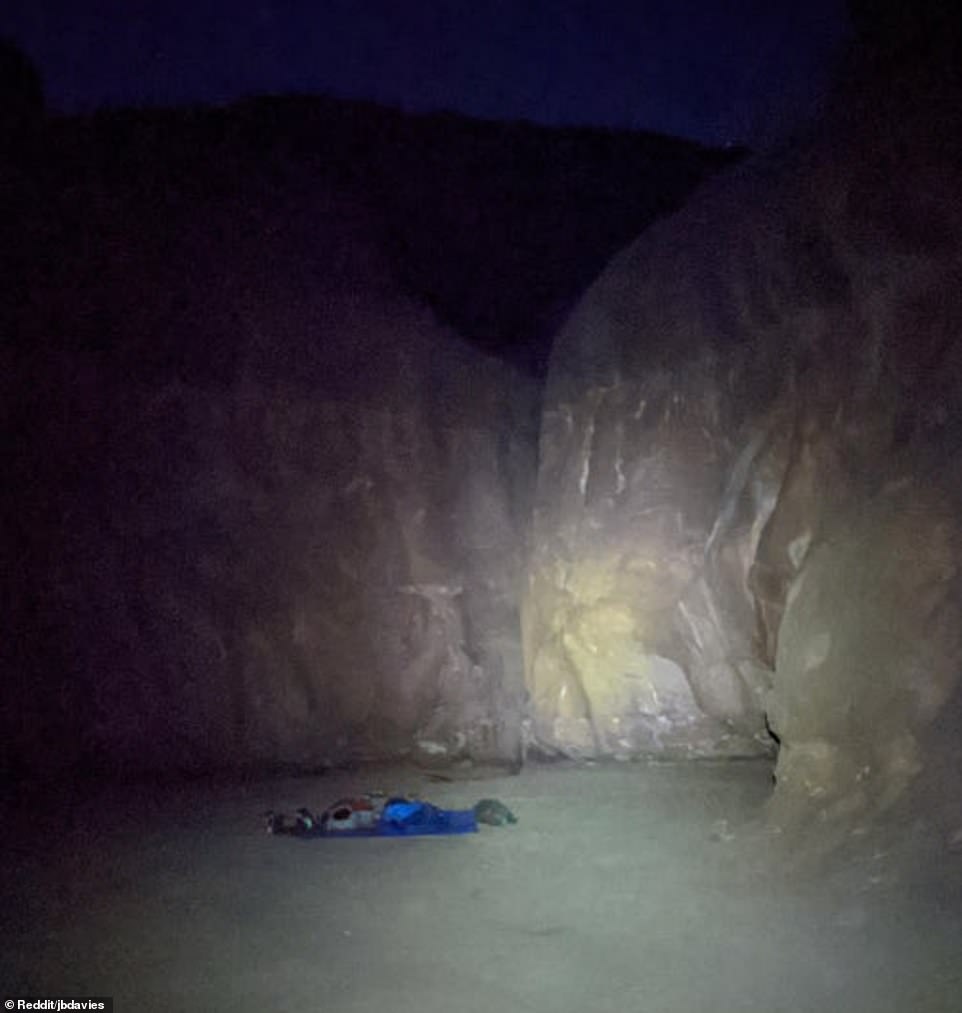 Marino added that on the way there they heard voices in the distance coming from the trucks he passed. When they left the monolith’s remains they found the group had gone, leading him to suspect they could have collectiely been behind removing the structure.

The Bureau of Land Management in Utah said they weren’t responsible for removing the structure.

‘[We] did not remove the structure which is considered private property. The structure has received international and national attention and we received reports that a person or group removed it on the evening of 27 Nov,’ the agency said in a statement.

The bureau said it will ‘not investigate crimes involving private property’ as they are ‘handled by the local sheriff’s office.’

The bureau said hordes of visitors flocked to the area to see the spectacle in person, but the undeveloped area does not have restrooms or a parking lot, as a result officials had to clean up human feces left behind by explorers.

‘Visitors who flocked to the site parked on vegetation and left behind human waste as evidence of their visit. The undeveloped area does not have restrooms or a parking lot,’ the bureau said.

To this day the origin of the monolith is not known, however there are several theories.

Many theorize that the pillar could be the work of the lae artist John McCracken. A spokesperson for his gallerist David Zwirner told the New York Times it could be one of his works.

The BLM said in a Facebook post on Saturday: ‘We have received credible reports that the illegally installed structure, referred to as the ‘monolith’ has been removed from Bureau of Land Management (BLM) public lands by an unknown party’ 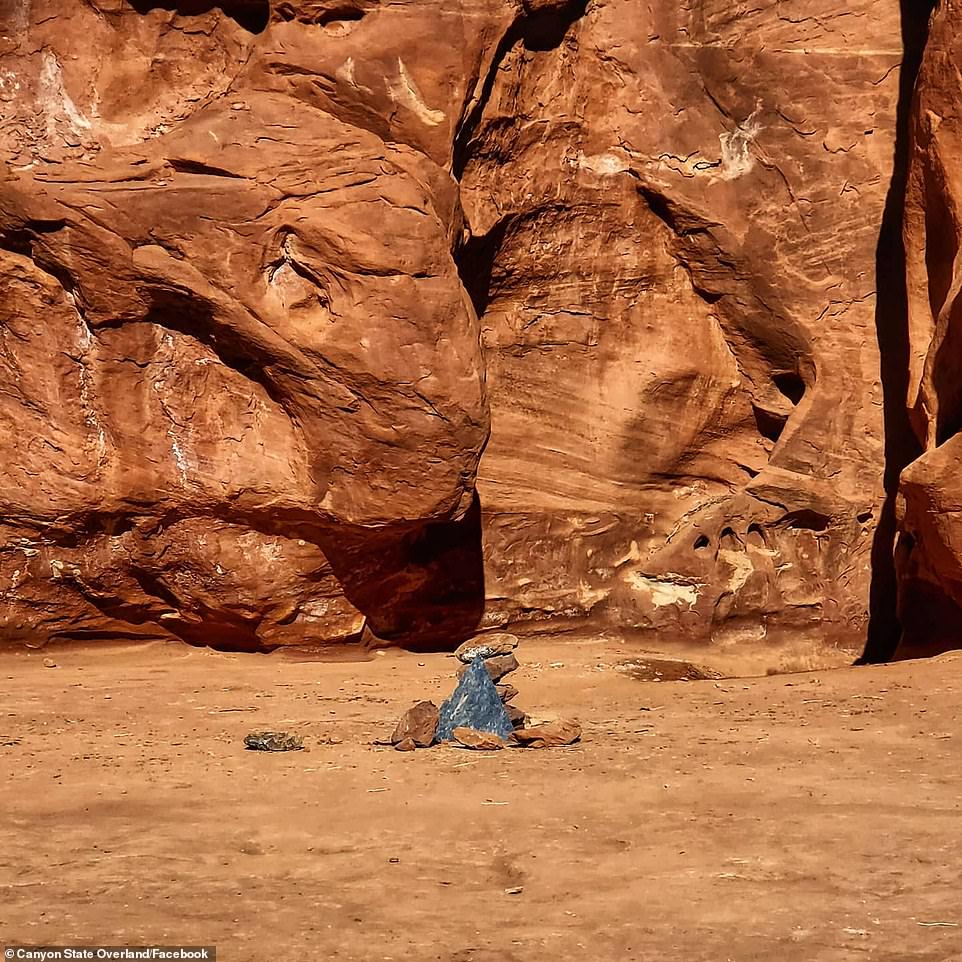 The three-sided structure was removed (pictured) by ‘an unknown party’ on Friday evening, the Bureau of Land Management Utah said in a statement

Many noted the object’s similarity to the strange alien monoliths that trigger huge leaps in human progress in Kubrick’s classic sci-fi film ‘2001: A Space Odyssey.’

Reddit users theorized that the object was installed by an artist and taken away in the night.

‘I’d wager some dollars the artist took it. 1. They installed it, they know how to remove it easily. 2. Adds to the mystery; it was gone as soon as it appeared. 3. Feds were probably going to take it anyway. 4. It’s going to show up somewhere else in Utah,’ one user shared.

‘It’s been there for years,’ another added, referencing how Google Earth images show it has been standing since at least 2015 or 2016. 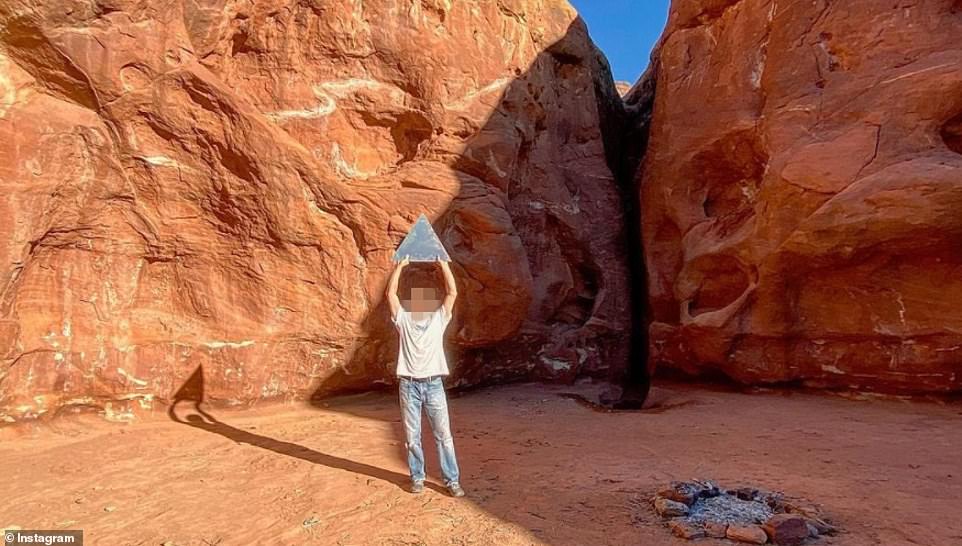 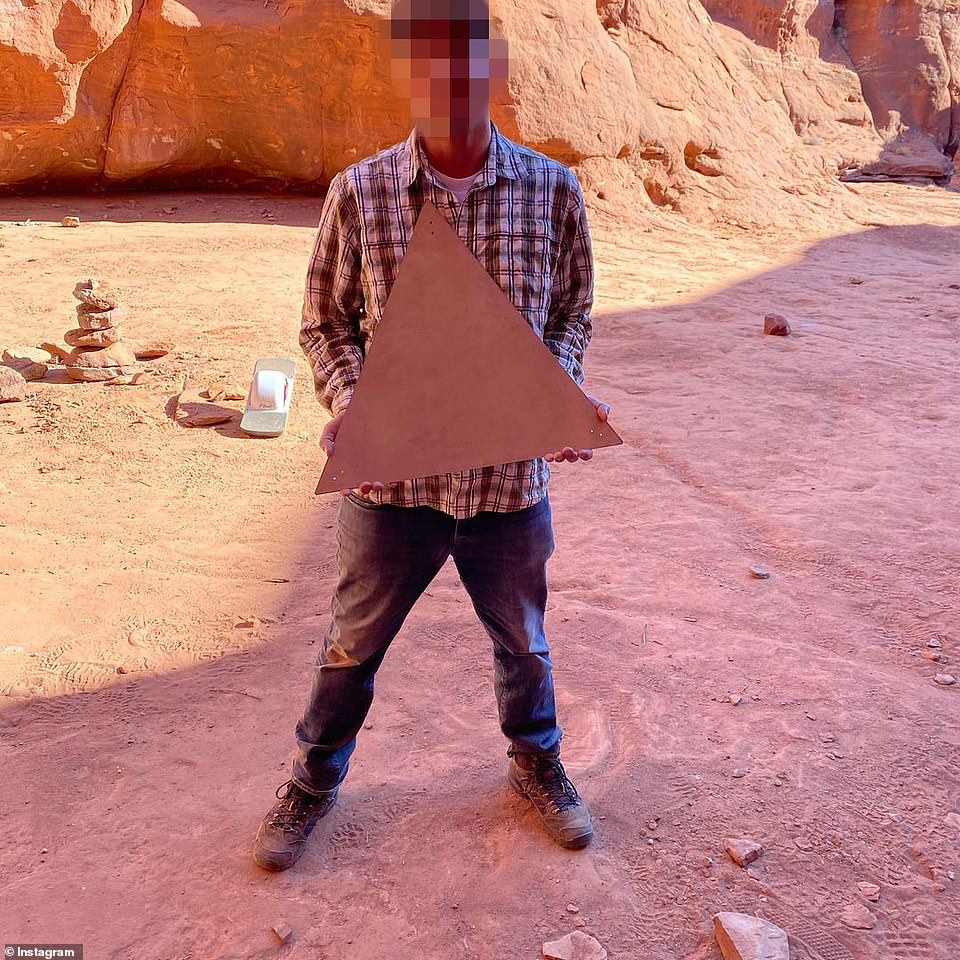 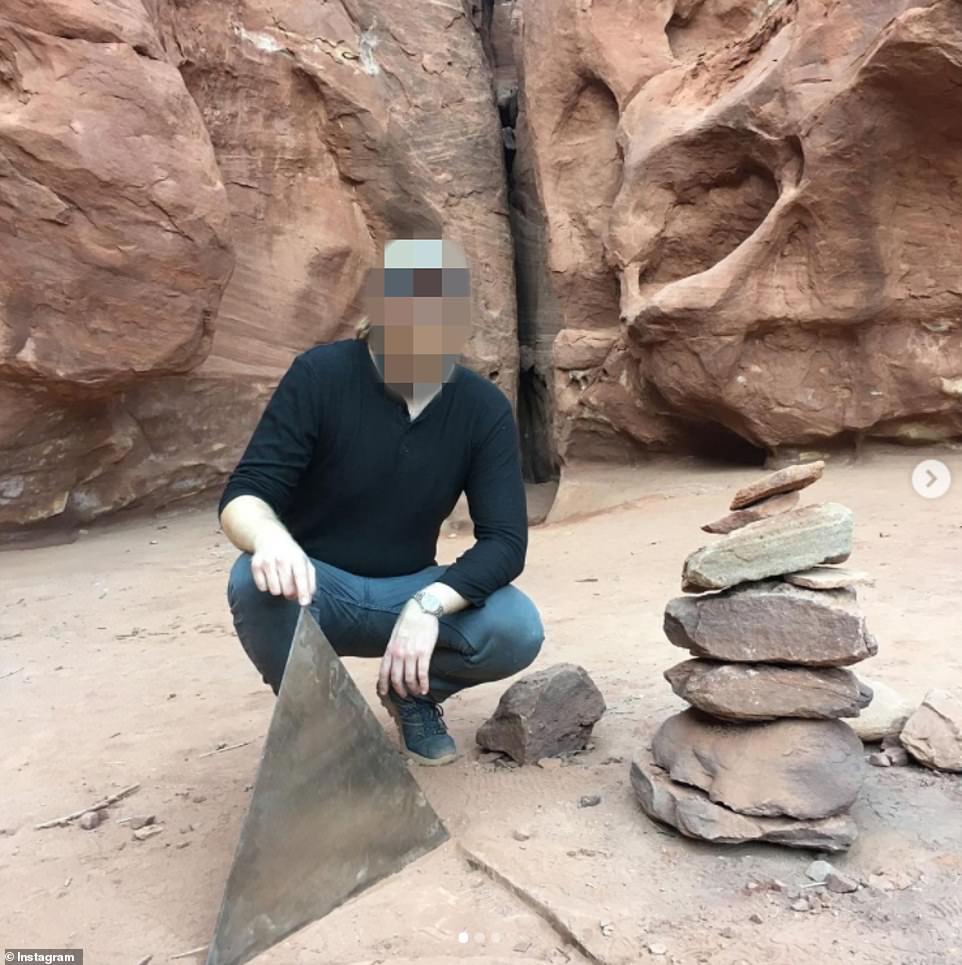 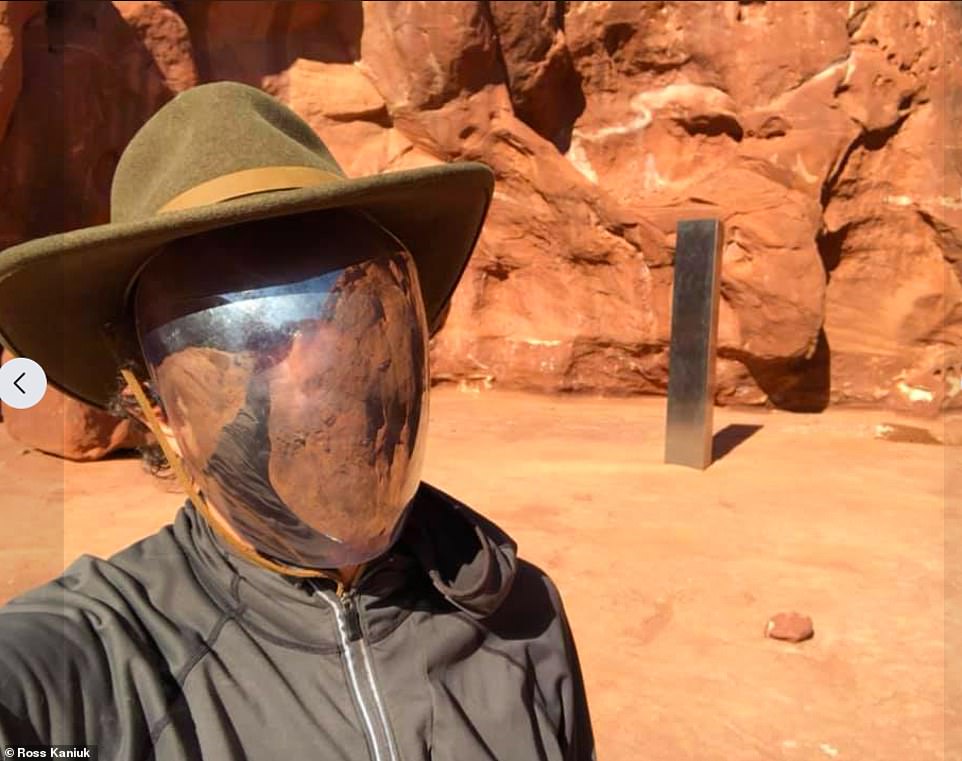 Colter Hoyt, from Boulder Town, Utah, drove nine hours to visit the monolith in the desert 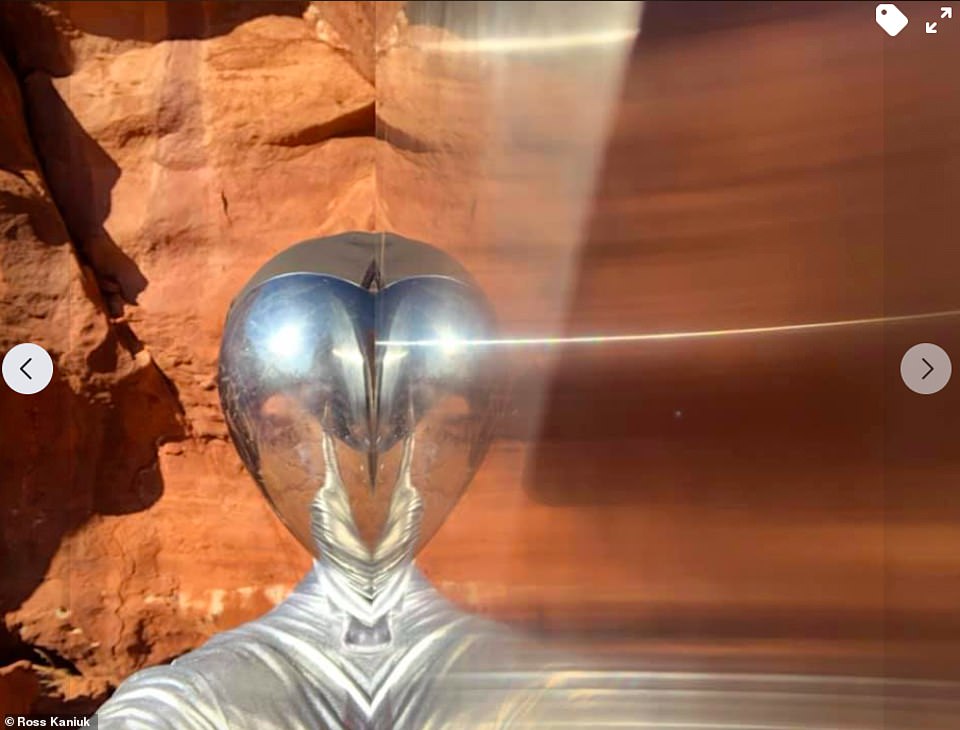 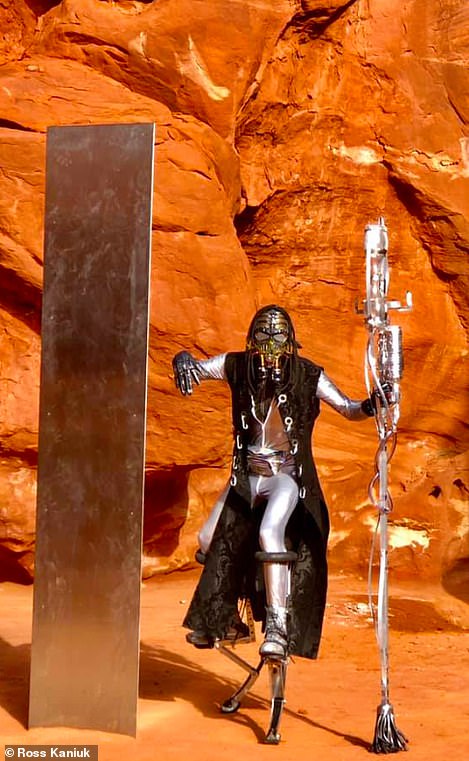 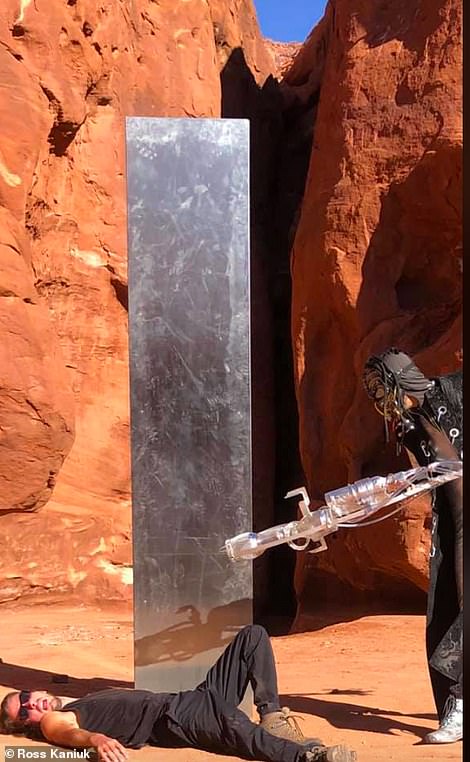 ‘The aliens took it back because of all the whiners,’ another user added, believing the pillar was the work of extraterrestrial life.

Others wondered if a group of people stole the pillar to have it for their own means.

Bret Hutchings, the pilot who happened to fly over the obelisk, speculated that it had been planted by ‘some new wave artist.’

Either way, Hutchings admitted it was ‘about the strangest thing I’ve come across out there, in all my years of flying.’

Officials suggest it could be have been constructed by an artist or a huge fan of 2001: Space Odyssey – the structure resembles the machines found in Arthur C. Clarke’s story (pictured) 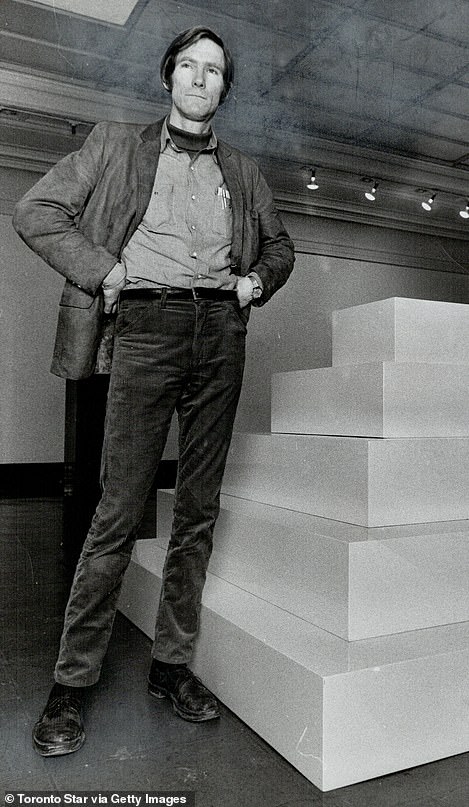 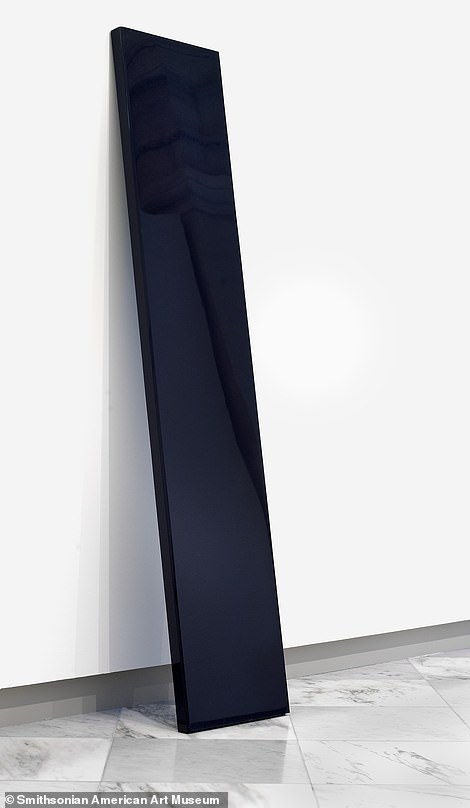 Some observers also pointed out the object’s resemblance to the avant-garde work of John McCracken (left) an American artist who lived for a time in nearby New Mexico, and died in 2011. He was known for his freestanding sculptures in the shape of pyramids, cubes, or sleek slabs (right)

‘We were kind of joking around that if one of us suddenly disappears, then the rest of us make a run for it,’ he told local news channel KSLTV.

Utah has a history of ‘land art,’ unusual installations that cropped up far from population centers in the 1960s and ’70s.

The most famous, Spiral Jetty, a 1,500-foot-long coil by artist Robert Smithson in 1970 that’s composed entirely of mud, salt crystals and basalt.

Located on the northeastern edge of the Great Salt Lake near Rozel Point, the jetty appears and disappears depending on water levels.

So far, no one has stepped forward to claim responsibility for the monolith, though. 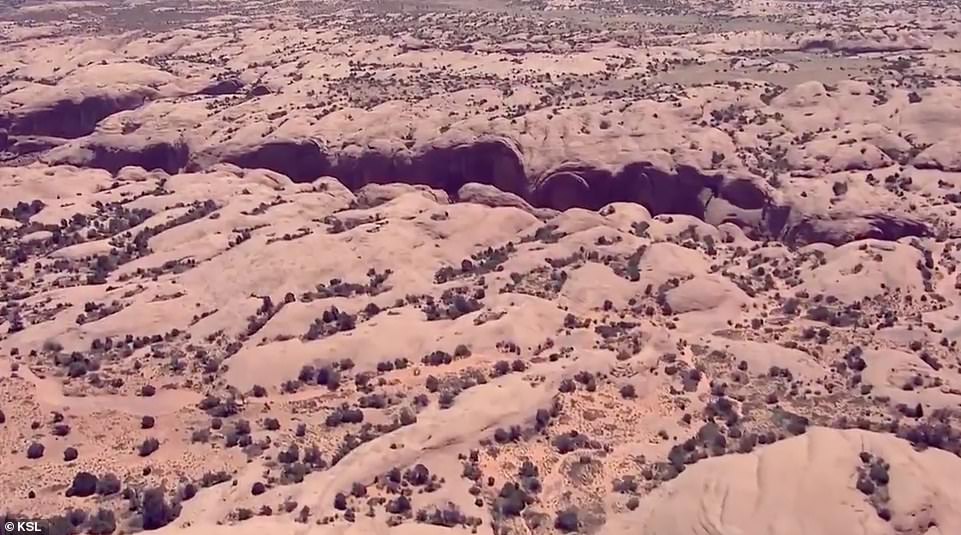 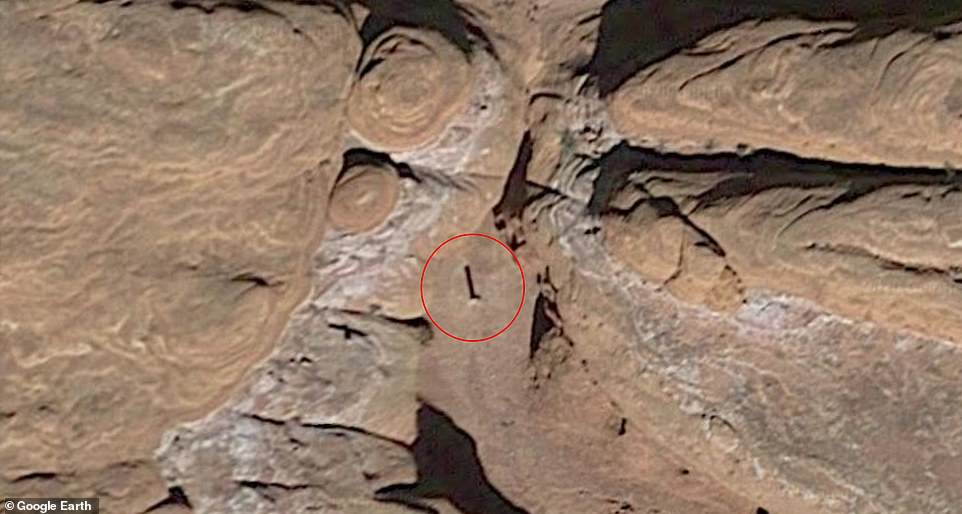 Utah: Officials have refused to disclose the metal obelisk’s location out of fear that curious sightseers would flock to the remote wilderness, but internet sleuths managed to pinpoint its position nonetheless. Google Earth images show it has been there since 2016 or 2015 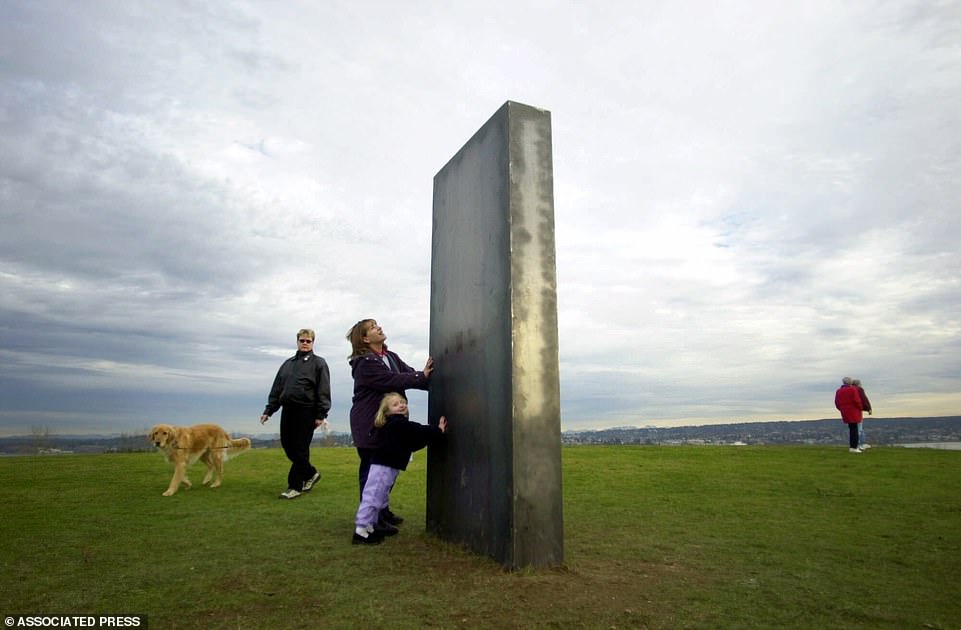 A view of the mystery monolith in Magnuson Park in Seattle pictured on January 2, 2001

Colter Hoyt, from Boulder Town, Utah, drove nine hours to visit it before posing in a collection of fancy dress outfits for a series of selfies and pictures which he posted to Facebook on Saturday.

He captioned the pictures: ‘The Obelisk! I know it will be photographed heavily in the near future until its demise, but I don’t think too many people will do it quite as much justice as me.

‘(I took a lot more pictures in a variety of outfits and places nearby, these are just a few. Was so fun!)’

A similar version of Utah’s monolith appeared nearly 20 years ago on New Years Day in Seattle.

Just as with the Utah sighting, there was no initial clues left about the structure’s creators or its origin.

Park officials said at the time no one obtained permits to install the structure and when they pushed against it, it would not give.

Then on January 3 it disappeared without a trace, leaving behind a concrete platform that was used to anchor it.

In its place was a single red rose with its stem snapped into two pieces, as per KIRO7.

It was then discovered the following morning on Green Lake’s Duck Island.

Artist Caleb Schaber then came forward as a spokesperson for the monolith saying he and a band of anonymous collaborators calling themselves ‘Some People’ made the object and several smaller versions that were placed around the Seattle.

But he said his group had nothing to do with the monolith’s disappearance.

In the film, the monolith was a tool created by an alien race that trigger huge leaps in human progress.

The structure has also drawn comparisons to the work of minimalist artist John McCracken.

McCracken, who died in 2011, was known for his freestanding sculptures in the shape of pyramids, cubes, or sleek slabs.

The monolith closely resembles McCracken’s pieces, leading some to speculate this could be one of his own works of art.

Adding to the theory is that McCracken had lived and worked in nearby New Mexico and California.

A spokeswoman for his representative David Zwirner said it was not one of McCracken’s works.

Zwirner later gave another statement in which he suggested the piece was indeed by McCracken.

‘The gallery is divided on this,’ Zwirner said. ‘I believe this is definitely by John.’

Many have speculated the structure could just be the work of a new wave artist or sci-fi fan.

Pilot Bret Hutchings, who discovered the monolith, suggested it was placed by ‘a big 2001: A Space Odyssey’ fan.’

A David Zwirner rep said it was possibly by a fellow artist paying homage to McCracken.