A supercomputer in the US called ‘Frontier’ has become the fastest in the world, beating its closest rival in Japan.

Frontier, based at the US Department of Energy’s Oak Ridge National Laboratory in Tennessee, is the first to achieve a level of computing known as ‘exascale’.

Exascale refers to a system that can perform at least one quintillion operations per second – a billion billion calculations, or 1 followed by 18 zeroes.

This makes Frontier more than twice as powerful than the Fugaku supercomputer in Japan, which was deemed the world’s fastest supercomputer back in June 2020.

Frontier will allow scientists to develop technologies for the US’s energy, economic and national security, said Oak Ridge National Laboratory, and solve computational problems that were impossible to do just five years ago.

Fugaku with its 442 petaflops, meanwhile, is placed second on the TOP 500 list, which ranks computer systems by power twice a year.

Rankings were announced at the International Supercomputing Conference 2022, which is taking place this week in Hamburg, Germany.

‘This milestone offers just a preview of Frontier’s unmatched capability as a tool for scientific discovery.’

According to ORNL, Frontier features a theoretical peak performance of 2 exaflops, or two quintillion calculations per second.

This makes it 10 times more powerful than ORNL’s existing Summit supercomputer, which sits on the TOP 500 list at number four. 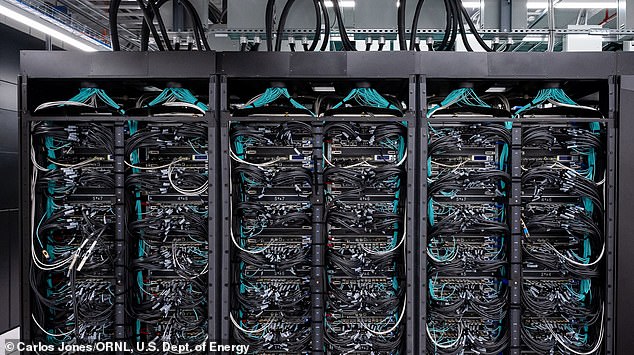 The system is the first to achieve an unprecedented level of computing performance known as exascale, a threshold of a quintillion calculations per second 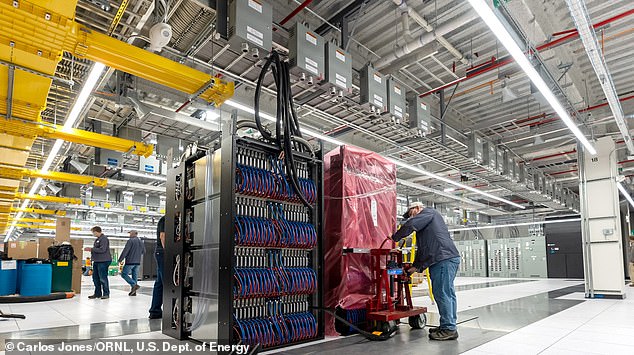 Testing and validation of the Frontier system is still ongoing, but full science operations are on track for the beginning of 2023

Each ‘flop’ represents a possible calculation, such as addition, subtraction, multiplication or division.

And one quintillion is a billion billion, or 1 followed by 18 zeros.

To put that number in perspective, the Milky Way galaxy is 1 quintillion kilometers wide, and it would take 40 years for 1 quintillion gallons of water to flow over Niagara Falls.

Further, you’d need every single person on Earth calculating 24 hours a day for more than four years to do what an exascale supercomputer can do in 1 second.

According to one expert, two new supercomputers in China may actually be faster than Frontier – it’s just that operators of those Chinese systems have not submitted test results for evaluation by scientists at TOP 500.

This may be due to tensions between the US and China, although there are some Chinese entries on the new list.

‘There are rumours China has something,’ Jack Dongarra, a computer science professor at the University of Tennessee, told the New York Times. ‘There is nothing official.’

They are also used for modelling climate systems; the UK Met Office has a Cray XC4 which is one of the most powerful of its type dedicated to climate modelling, although it’s set to be replaced by a more powerful system this year.

Supercomputers can also be used biotechnology research and medicine – the Fugauku machine has been working on the fight against Covid.

The work to deliver, install and test Frontier began during the Covid pandemic, but shutdowns around the world strained international supply chains.

More than 100 members of a public-private team worked around the clock to get Frontier built, from sourcing millions of components to ensuring deliveries of parts on time. 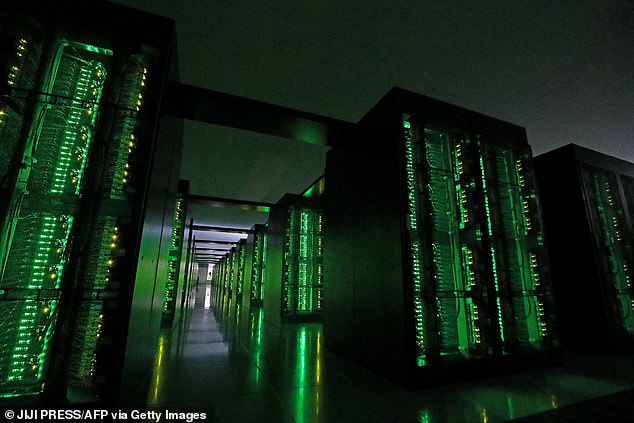 Frontier is more than twice as powerful than the Fugaku supercomputer in Japan (pictured), which was deemed the world’s fastest supercomputer back in June 2020

The lab said testing and validation of the system is still ongoing, but full science operations are on track for the beginning of 2023.

‘When researchers gain access to the fully operational Frontier system later this year, it will mark the culmination of work that began over three years ago involving hundreds of talented people across the Department of Energy and our industry partners at HPE and AMD,’ said Jeff Nichols at ORNL.

‘Scientists and engineers from around the world will put these extraordinary computing speeds to work to solve some of the most challenging questions of our era, and many will begin their exploration on day one.’

Frontier may be displaced at the Top 500 summit by a supercomputer that’s currently being built by Mark Zuckerberg’s firm Meta.

The AI Research SuperCluster (RSC) will be the fastest supercomputer in the world when it’s fully built by mid 2022, according to the tech giant.

RSC will ultimately power the metaverse, a virtual-reality space online in which users can interact with a computer-generated environment and avatars of others.

Meta hasn’t revealed where exactly its supercomputer is based, although it could be at or close to the company’s headquarters in Menlo Park, California.

WHAT IS A SUPERCOMPUTER?

A supercomputer is a computer with a high level of performance compared to a general-purpose computer.

Supercomputers contain tens of thousands of processors and can perform billions and trillions of calculations or computations per second.

Because supercomputers are often used to run artificial intelligence programs, supercomputing has become synonymous with AI.

This regular use is because AI programs require high-performance computing that supercomputers offer.

In other words, supercomputers can handle the types of workloads typically needed for AI applications.