The US Department of Agriculture (USDA) has approved the world’s first vaccine for honeybees to protect the endangered insects from a deadly disease caused by spore-forming bacteria, Paenibacillus larva.

The disease, known as American Foulbrood, was only contained by burning the colony and hive.

The vaccine is developed with killed whole-cell Paenibacillus larva bacteria that is mixed with food fed to the queen and passed on to her offspring, which will then be immune to the disease.

The treatment has been approved under a conditional license, which is issued to meet an emergency condition.

And for the case of honeybees, these creatures are a critical component of agriculture – one-third of the global food supply relies on pollination.

The US has greenlighted the world’s first vaccine for honeybees. The vaccine is to protect broods from a deadly disease caused by spore-forming bacteria, Paenibacillus larva

American Foulbrood infects honeybee brood and although it is not highly contagious, bacterial spores can easily be spread between hives and apiaries through beekeeping practices such as exchanging equipment and moving infected combs.

Dalan Animal Health, a biotech company pioneering insect health, developed the vaccine, which was announced to be safe and effective for honeybees last October.

Annette Kleiser, CEO of Dalan Animal Health, said in a statement: ‘This is a big step for sustainable agriculture worldwide.

‘Honeybees are such an important link in our food supply chain, But the industry is at a breaking point. It lacked all the modern animal care and welfare tools available to other agriculture sectors. We are proud that we opened the door to this new animal health sector.’

Administering the vaccine starts by mixing it into queen feed consumed by worker bees, which then incorporates it into the royal jelly fed to the queen.

The queen ingests the jelly and fragments of the vaccine are deposited in her ovaries, where her larva are exposed and hatch with immunity to the disease.

Trevor Tauzer, owner of Tauzer Apiaries and board member of the California State Beekeepers Association, said in a statement: ‘This is an exciting step forward for beekeepers, as we rely on antibiotic treatment that has limited effectiveness and requires lots of time and energy to apply to our hives.

‘If we can prevent an infection in our hives, we can avoid costly treatments and focus our energy on other important elements of keeping our bees healthy.’ 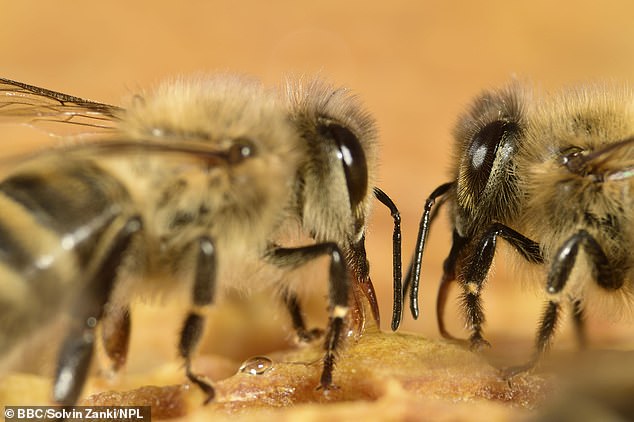 The vaccine is developed with killed whole-cell Paenibacillus larva bacteria that is mixed with food fed to the queen and passed on to her offspring, which will then be immune to the disease

The insects were vaccinated with a placebo or the bacterin, randomized, and placed into their hive to begin laying eggs.

‘Since hives cannot be infected in the wild due to the lethal and highly contagious nature of the disease, the resulting larvae form vaccinated, and placebo hives were brought to the lab and exposed to highly infectious spores of American Foulbrood for multiple days, then survival was assessed,’ Dalan shared.

‘The researchers observed a significant increase in disease resistance in the offspring of vaccinated queens in this laboratory setup.’

If you enjoyed this article….

Honey bees in the UK are being wiped out by a chronic viral disease that causes trembling, weird ‘greasy’ abdomens and inability to fly