US Treasury Secretary Steven Mnuchin today said the White House wants to agree a post-Brexit trade deal with the UK before the end of the year.

Speaking at the World Economic Forum in Davos, Switzerland, the senior ally of Donald Trump said Britain is ‘top of the list of trade agreements’ which the US administration wants to get in the books.

Describing the UK as ‘our number one ally’, Mr Mnuchin said the US ‘look forward’ to concluding an agreement with Downing Street ‘this year’.

He said: ‘The UK is our number one ally and it would be at the top of the list of trade agreements. We look forward to getting that done this year.’

His comments represent a massive boost for Boris Johnson as the Prime Minister prepares the government for post-Brexit trade talks.

Steven Mnuchin, the US Treasury Secretary pictured in Davos, Switzerland today, said of a trade deal with the UK: ‘We look forward to getting that done this year.’

As a member of the European Union the UK is currently barred from negotiating its own trade deals.

But as soon as Britain splits from Brussels on January 31 at 11pm it will be able to pursue its own agreements.

The UK is expected to negotiate a deal with the US at the same time as it discusses one with the EU.

Brexiteers hope the dual talks strategy and the prospect of a swift deal with the US will stop the EU from dragging its feet during talks.

Meanwhile, today it emerged that the PM also wants to target a quick trade deal with Japan to show Brussels the UK is ready to move speedily.

The EU must agree a mandate for trade talks with the UK and it can only do that once Britain has left the bloc.

Once the UK leaves the EU at the end of this month the two sides will enter a standstill transition period when the terms of the future partnership will be hammered out.

That transition period will finish in December and Mr Johnson is adamant he will not sanction an extension, insisting the end of the year must be viewed as a hard deadline for a deal to be done. 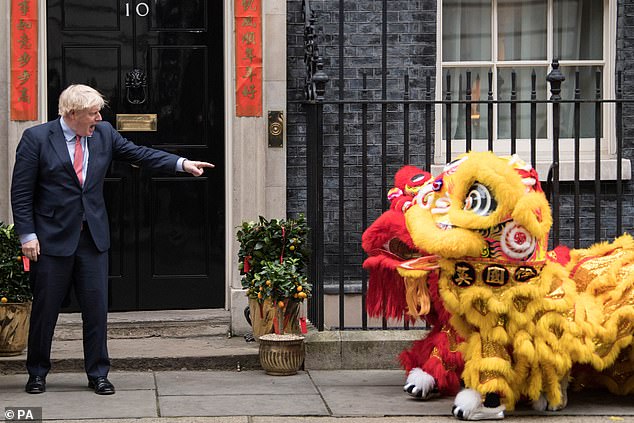 Mr Mnuchin’s comments represent a massive boost to Boris Johnson, pictured in Downing Street today celebrating Chinese New Year, who is hoping the prospect of a swift US trade deal will prompt the EU to also move quickly on a future partnership agreement

But the EU does not believe 11 months is long enough to agree a comprehensive deal, raising the prospect of the transition period ending without a full agreement in place.

If the UK has a trade deal with the US already agreed it would lessen the impact of a chaotic split from the EU at the end of the year and make the bloc more likely to work at pace, Brexiteers have argued.

Mr Mnuchin’s intervention came as it was reported that the EU has accepted the transition period will not be extended.

A senior official with the bloc said: ‘We can assume at this point that the transition period will end on December 31, 2020.’