The U.S. Supreme Court halted the execution of a Texas death row inmate one hour before he was scheduled to die Tuesday.

Ruben Gutierrez, 43, had been set to die at 6 p.m. CDT at the Texas State Penitentiary in Huntsville for the 1998 murder of an elderly mobile-home park owner during a robbery.

But he was granted a reprieve, continuing a more than four-month delay of executions in the nation’s busiest death penalty state during the coronavirus pandemic.

The Supreme Court granted an emergency petition by lawyers for Gutierrez for a stay of execution over a new Texas Department of Criminal Justice policy banning chaplains and other religious advisers in the death chamber. Gutierrez is Catholic.

Prosecutors said Gutierrez was attempting to steal more than $600,000 that Escolastica Harrison had hidden in her home when he killed her.

Kim Kardashian celebrated the news on social media, writing: ‘Thank you Supreme Court of the United States for granting a Stay of Execution for Ruben Gutierrez! Now his case will go back to the lower courts to decide the issues with his case!’

Gutierrez’s wife Nicie also tweeted to say: ‘I love my husband so much… only God knows what he has in store for us in our lives. We will get through this!!! Fight to save Ruben #RubenGutierrez love over death…TEST THE DNA.’

The U.S. Supreme Court halted the execution of a Texas death row inmate Ruben Gutierrez, pictured, one hour before he was scheduled to die Tuesday 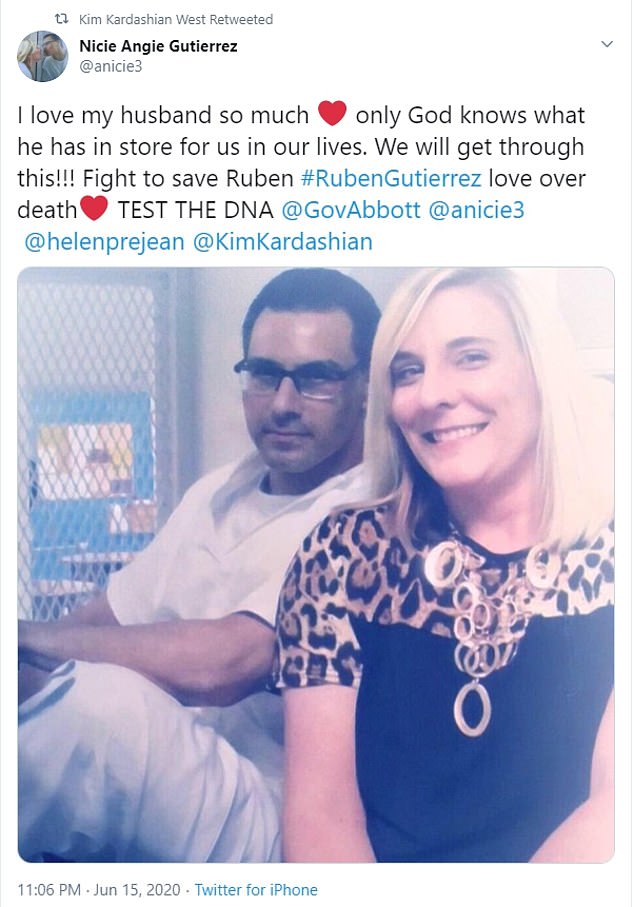 Gutierrez’s wife Nicie also tweeted to say: ‘I love my husband so much…only God knows what he has in store for us in our lives. We will get through this!!! Fight to save Ruben #RubenGutierrez love over death…TEST THE DNA’

If Gutierrez´s execution had been carried out, he would have been the first inmate in Texas to receive a lethal injection since February 6.

He would have been the second U.S. inmate to be put to death since states began to reopen after the pandemic shut down much of the U.S.

After the country began to reopen, Missouri resumed executions on May 19.

Gutierrez´s execution was blocked about an hour before he could have been executed. His attorneys argued his religious rights are being violated because the prison system won´t allow a chaplain to accompany him in the death chamber.

The Texas prison system last year banned clergy from the death chamber following a Supreme Court ruling that halted the execution of another inmate, Patrick Murphy, who had requested a Buddhist adviser be allowed in the chamber.

In response to the ruling in Murphy´s case, the Texas prison system changed its policy, only allowing prison security staff into the execution chamber.

‘As a devout Catholic, Mr. Gutierrez´s faith requires the assistance of clergy to help him pass from life into afterlife. The Texas Department of Criminal Justice changed its policy for its own convenience, but spiritual comfort at the time of death is not a convenience; it´s a protected legal right,’ Shawn Nolan, one of Mr. Gutierrez´s attorneys, said after the stay was granted.

Gutierrez has long maintained he didn´t kill Harrison. His attorneys say there´s no physical or forensic evidence connecting him to the killing.

According to court documents, Gutierrez went to Harrison’s home on September 5, 1998, with two accomplices, Rene Garcia and Pedro Garza. There they stabbed Harrison to death with a screwdriver and made off with $56,000.

Garcia is serving a life sentence. Garza fled after he was released on bond while awaiting trial and remains a fugitive.

‘The state has fought such (DNA) testing at every turn, but surely the public interest would be best served by allowing DNA testing while the (Supreme Court) considers Mr. Gutierrez´s case, in order to prevent a wrongful execution in the future,’ Nolan said. 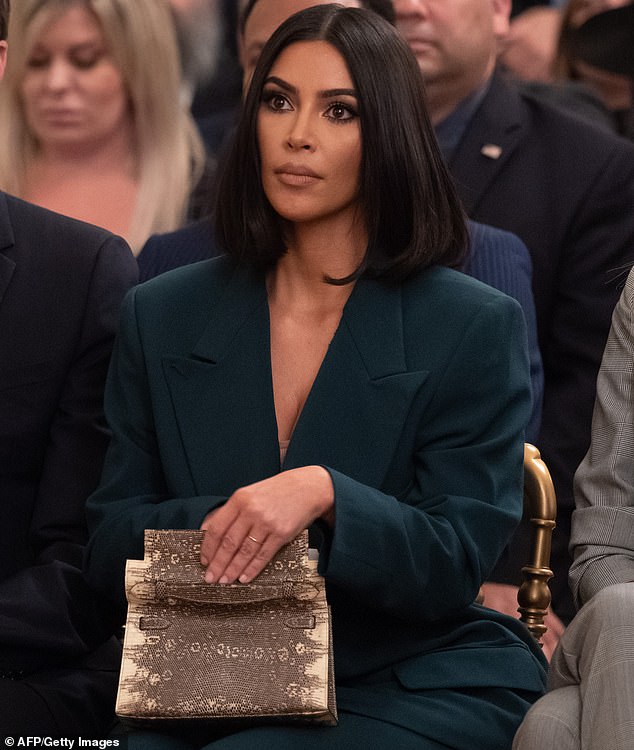 Kim Kardashian thanked the U.S. Supreme Court for granting convicted murderer Ruben Gutierrez a stay of execution. She’s seen during a 2019 visit to the White House above 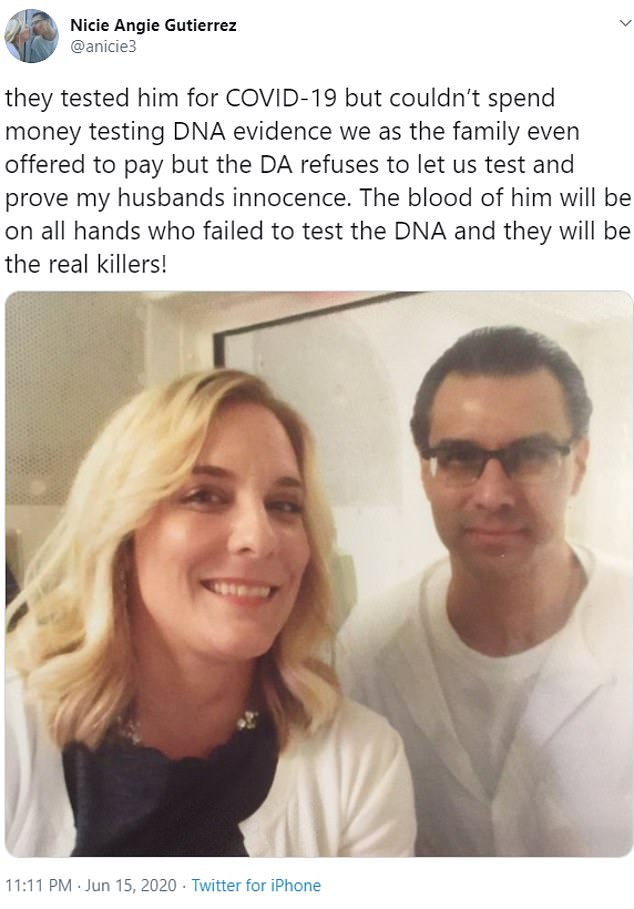 The 5th U.S. Circuit Court of Appeals on Friday had overturned a stay in the case tied to Gutierrez´s request for DNA testing he says could point to the real killer and his claims his religious rights are being violated

Authorities said Gutierrez befriended Harrison, a mobile home park manager and retired teacher, so he could rob her.

Prosecutors said Harrison had a mistrust of banks and hid her money underneath a false floor in her bedroom closet.

Cameron County District Attorney Luis Saenz said he was disappointed the Supreme Court delayed the execution as the victim’s family ‘has once again been denied justice.’

‘As a prosecutor, this changes nothing. It only delays his ultimate fate,’ Saenz said in a statement.

Prosecutors have said the request for DNA testing is a ‘ruse’ and Gutierrez was convicted on various pieces of evidence, including a confession.

The Supreme Court said it granted the stay pending a ruling by the high court on Gutierrez´s petition on the issue of whether to allow a spiritual adviser to accompany him in the death chamber. A decision on the petition was expected at a later date.

The Supreme Court said if it were to rule in favor of Gutierrez, it would ask a lower court to ‘determine, based on whatever evidence the parties provide, whether serious security problems would result if a prisoner facing execution is permitted to choose the spiritual adviser the prisoner wishes to have in his immediate presence during the execution.’

A trial in Houston federal court on Murphy´s case and whether his religious rights were violated is also still pending. 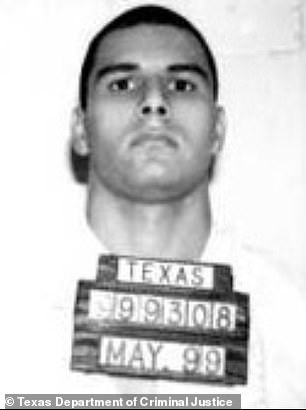 Prosecutors said Gutierrez was attempting to steal more than $600,000 that Escolastica Harrison had hidden in her home when he killed her

Six executions scheduled in Texas for earlier this year were postponed by an appeals court or judges because of the outbreak.

A seventh was delayed over claims of intellectual disability.

Gutierrez´s attorneys had also sought a coronavirus-related delay but were turned down Friday by the Texas Court of Criminal Appeals.

While the number of COVID-19 cases and hospitalizations continues to increase in Texas, state prison officials said they put safety measures in place to help executions go forward, including taking the temperatures of participants and providing them with personal protection equipment.

The 5th U.S. Circuit Court of Appeals on Friday had overturned a stay in the case tied to Gutierrez´s request for DNA testing he says could point to the real killer and his claims his religious rights are being violated.

The Texas Catholic Conference of Bishops filed a brief with the high court in support of Gutierrez.

‘To deny a prisoner facing imminent execution access to spiritual and religious guidance and accompaniment is cruel and inhuman,’ said Bishop Daniel Flores of Brownsville.

Gutierrez would have been the third inmate put to death this year in Texas and the seventh in the U.S.